As I fly to work meetings I have on the east coast, I'm reflecting on the weekend that was the Spartan Arizona Sprint. Driving to the venue Saturday morning, I got excited as a kid on Christmas Day like I always do before an OCR event. But this time, I wasn't getting mentally prepared, focusing on how I would attack the race and other pre-race rituals I have come to do before a race. Due to continued rehab for a shoulder injury I sustained in Dec, I would not be able to compete, but that wouldn't stop me from sharing the experience with you awesome Spartans as a roving reporter!!

Before the AZ race, I got in touch with the great people at #MudRunGuide and asked if I could write a recap of the race for them while running it as a non-competitor. Brett and Kristen were all for it, and they had Matt get with Spartan Race, who were very accommodating in getting me a media pass.

Since my son-in-law was already racing, I figured I'd jump in with his 0830 group, be his unofficial pacer part of the way and cover everyone else running as well. 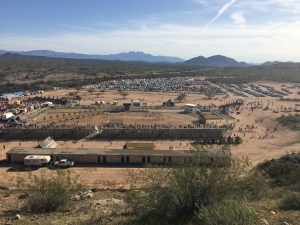 It was a beautiful day for a race at Fort McDowell Rodeo Grounds. High clouds early on, kept the temperature still cool, and the sun playfully teased us on when it would break through and heat up the course for all competing on it.

It was my first visit to this race and the way they set up the course to incorporate the extensive permanent viewing stands in-between the start and finish lines was genius, giving spectators great views of their friends and loved ones doing different obstacles.

The course itself was laid out over a scenic and challenging desert landscape where you had to be sure footed on much of the sandy, rocky terrain. I thought to myself how cool it would be to do this course by horseback. 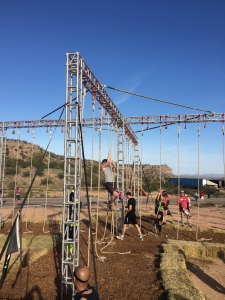 The 0830 group took off into the desert, and I jumped in and away we went. As I said earlier, the footing and terrain kept everyone honest if they were fast burners, as one wrong foot placement could end your race earlier than you wanted. The 1st mile was nice in the fact there were no real bottlenecks, and everyone was able to get into their pace comfortably, without feeling like they were in LA traffic at rush hour. The cargo net up & over, the inverted wall & other early obstacles were handled by all. It wasn't until we got to the rope climb when the burpee rate went up. This was a dry rope climb, and it was early on in the race, so it mainly came down to how much you wanted to smack that cowbell.

Even though some people had to do their burpees for not ringing the bell, their exuberance, and sheer positive attitudes were still evident. This wasn't a penalty to them, this was just par for the course, and they were going to have a great time regardless. 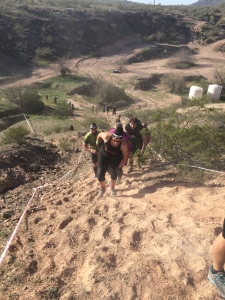 We continued through the rest of the course, with only one tough hill midway through the race. Even after this, though, I still saw smiles on people's faces. They were enjoying the challenge of this course and the company of their friends which motivated them to continue. I never saw any quit in anyone I came across. They were determined to #SpartanUp and do whatever it took, for however long it took to finish this journey. As we got to the summit of the hill and were about to head back down, the view below just captivated me at its beauty.

The final eight obstacles were able to be seen from the spectator area. It was a perfect set up for family and friends to cheer on their loved ones and for the athletes to get that last surge of energy they needed to finish from the cheering they heard from the stands.

The last obstacle before the fire jump was the dunk wall. What a perfect place to get washed off before you jumped the flames. Overall the race set up was done nicely. The water stations were abundant, and the course was challenging. I measured it at about 4.18 to 4.2 miles. It was a great test for everyone of all levels. 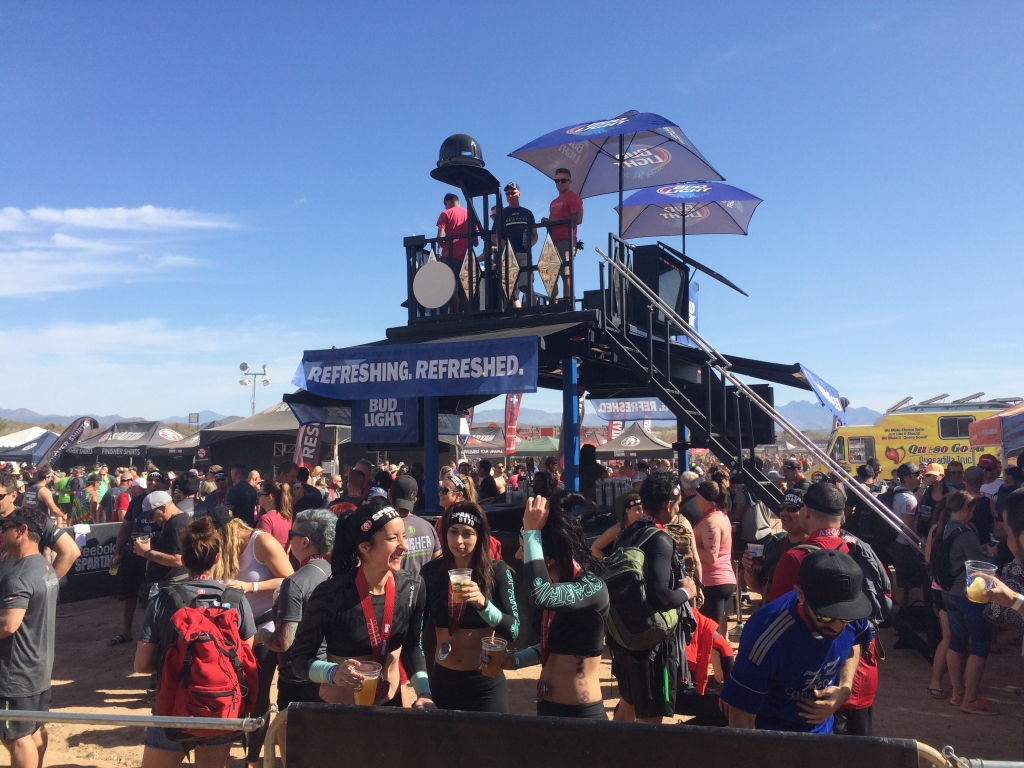 The desert landscape had me marveling at its beauty. Something about Arizona I've always loved. In my opinion, it's a must do race on your Spartan calendar and you won't be disappointed.