This would be my first Armageddon Ambush in Hialeah, FL (think City of Miami and go west a bit).  But it wouldn't be my first trip to Amelia Earhart Park. Several races have been held there.  With this in mind, my first challenge was to keep my expectations in check.  I didn't know much about this race, and I didn't want to influence the experience by comparisons to other events there. 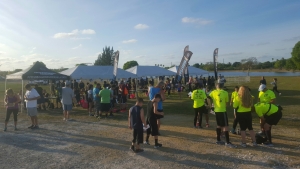 So I set my alarm for 5:30 am.  As much as I love to do Obstacle Course Racing (OCR), I still hate getting up early for it. Somehow I'm always wide awake an hour before the alarm goes off, raring to go, and this day was no exception.  I was at the event earlier than I expected and was pleasantly surprised at the number of racers who were there too.  Not to mention that the parking was handled smoothly…so far so good.  However, having been there before I didn't make the rookie mistake of trying to go over the closer (and closed!!) bridge to the venue.  Why doesn't anyone think to put up signs there??!!  When I did make it around to the festival area, I had another pleasant surprise.  There was the very familiar site of the waiver and registration tents although on a smaller scale.

One thing that was very obvious as soon as I got through registration was that Armageddon Ambush has a sharp focus on teams!  There were probably a dozen tents set up for different teams, and not just the largest one.  Apparently, any team over 25 gets a tent…complete with cases of water and bananas.  A nice touch.  Teams do bring up the level of excitement and enthusiasm, and this race was no exception.

At around 8:50 the ‘competitive' wave went off…to a countdown and some confetti/color cannons.  The race isn't timed, so it was pretty much the first three male and female racers across won some extra swag.  And whether it was for the chance at the swag or just to get in and back early, that wave was massive!  Normally I would have jumped in there too but in this case, I was happy to be watching and get out in a later wave. 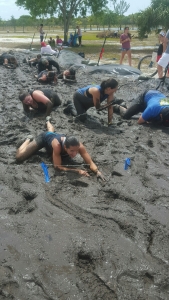 Despite my intentions, it was impossible not to have some expectations for the course.  I expected an easier course than what I was used to and got it at least at the start.  It felt like a lot of running in the beginning.  Maybe that's just because I hate running so much, and it was hot! Not blistering Miami heat but enough to notice.  And there weren't many water obstacles, even though the venue is perfect for them.  But those need safety personnel so I can understand why they were limited.  During that first half of the race, they did have a few obstacles spread out….a vertically shorter over-under series of walls, a section of dirt mounds to traverse and a barbed wire crawl.  But the difficulty picked up midway through…to my surprise and glee (yes….I did say glee…I told you, it was hot out there!).

To be honest, there's a good chance I have some of the obstacles out of place…although NOT the fact that the second half of the course was obstacle heavy.  One thing I have come to love (after the race) and hate (before) are the course maps!  When I run I don't want to know much about the course at all…other than how many water stations there are.  But I do like to see them afterward (especially if you're trying to write about it coherently and your memory has never been that great…and did I mention it was hot out there!!).

Towards the end of the first half we began hitting more…and harder….obstacles.  A couple of cargo net climbs, a short and relatively light sandbag carry, an ice crawl under some netting…right into a face full of color powder.  Admittedly, I'm not a color run guy, but I go with the flow.  Then there was a balance beam.  Which was well done except apparently my lane…a curved wobbling pair of boards that I did my best Flying Wallenda off of.  And that was also one of the few long wait obstacle lines.  Not even because of the difficulty but because racers would fall off and just jump back at the head of the line to try again…only m-o-r-e s-l-o-w-l-y.

This was due mostly to the fact that many seemed to be running their first OCR race. And though the obstacles were easier versions of the same obstacles at the majors, many were surprised and challenged to find the proper techniques on many of them.  They were also not aware of the courtesy ‘rules'….or maybe it was me not being aware of the norm here…who knows!  And I can understand that too….your first race like this, one shot at an obstacle isn't enough.  But the lines were rare, and since there was no real timing, delays were not something to worry about.   Relax and enjoy the race was my mantra for the day! 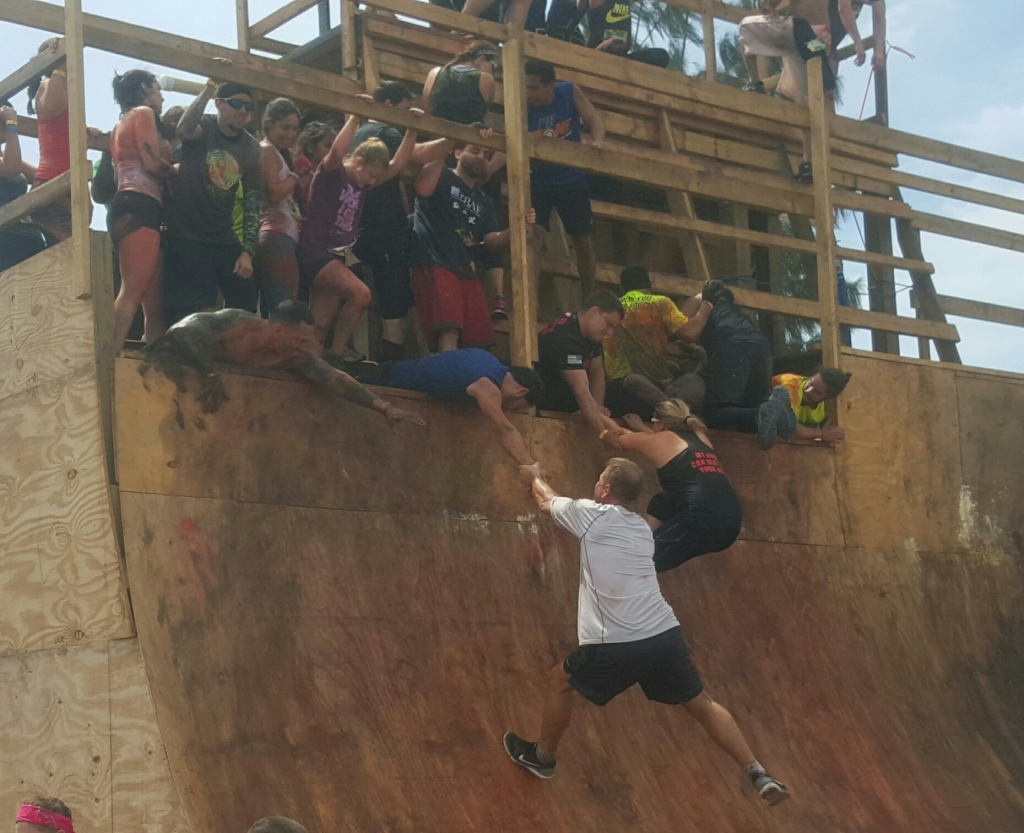 Although they laid out a course that was not noticeably familiar, they did include the section of wooded trails I remember fondly…one of my favorite parts of the course.  I prefer trails to open running normally…oh, and it was shaded!   On the back end, we came across an inverted wall and an inclined rope wall.  Again, it was interesting to see many people considering how to tackle these and taking cues from the more experienced racers ahead of them.  In the mix somewhere too was a ring obstacle.  I have to pay more attention to how these are affixed at the other races.  Because this one was very much like a human wind chime.  With one guy going right across and using both ring lanes…knocking the other racer right into the water without so much as a get-out-of-my-way! 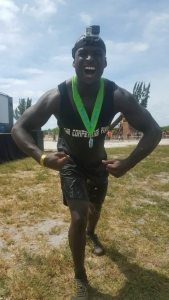 Coming into the stretch (I think) was another race staple…the Vertical Wall Traverse.  Surprisingly, I succeeded on this one, which was every bit as difficult as any other I've attempted.  Partly because I may finally have learned to be patient and methodical on the hand/foot movements….mostly.  Of course, there was a point where I was doing my best Jason Bourne impression…hanging on for life by my finger tips after a momentary lapse in concentration.  Wouldn't feel right if I didn't do that at least once in a race!

They also had a respectable rope climb and a multi-tiered version of the warped-wall with a ‘water slide' on the other side near the finish.  I didn't dare the wall this race, though…my shoulder was doing well enough that I didn't want to risk hurting it again this soon on the same obstacle.  Unfortunately, the water slide was down for repairs when I got there [but kudos to the build crew for getting it back up in fairly short order for later racers].  For me then it was on to the mud (real black, sticky mud) under barbed wire and on to the finish line [apparently the fire jump had become “too extreme” after the elites went through, so that became a sandpit…no biggie as it was hot out…in case I didn't get that point across yet!]. 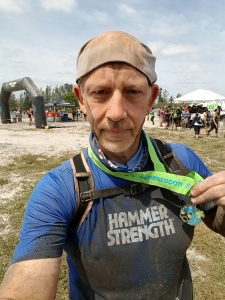 In the end, though, I found the Armageddon Ambush a good challenge and a race I would certainly do again.  It's a great entry level race for someone that wants to test the OCR waters and likes (or at least doesn't mind) getting colored along the way.  A race that won't kill the beginner (always a plus in my book!), but does have a few obstacles for the more experienced athletes to show off on (and yes, we all do that when we can).

The festival area, while smaller than I'm used to, did have a variety of food and drink available.  And did NOT run out of beer (another BIG plus in my book)…not to mention that they had Shock Top (although I'm not sure why I'm so surprised at that).  Although there were no changing tents…which apparently few others expected…there was also something else noticeably missing to me….complaining.  Despite some hiccups here and there, people were there to have fun and by-the-gods-of-weekend-warriors, there would be fun!!  So, when Armageddon Ambush comes back around to Miami…I'll be there…raring to go once again.

For those entering OCR, this would rate a 4 while some more experienced racers might give it a 3 if they are looking for a challenging experience. But overall it was well run and fun.

Use discount code MUDRUNGUIDE for $10 off your Armageddon Ambush registration