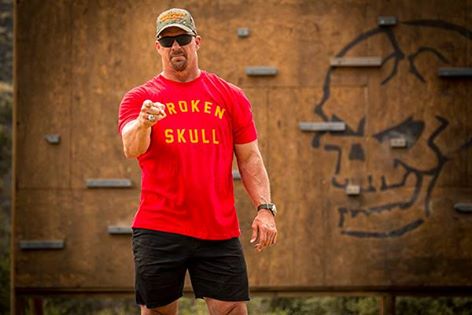 Last July, I was selected to compete on CMT’s reality show, Steve Austin’s Broken Skull Challenge. If you haven’t seen it before, you should check it out! There have been several obstacle racers featured: Alexander Nicholas, April Dee, Andi Hardy, Heather Camaratta, Brenna Calvert, Hunter McIntyre, and Cassidy Watton to name a few.

Eight competitors, who are of similar stature, are selected to compete and advance through four rounds of competition. The events range from physical contact to non-contact racing that involves high-intensity non-traditional tasks such as carrying and dragging heavy object. The fourth and final round is reserved for the top athlete in the field. This person is challenged with a half-mile obstacle course. The competitor must face the previous show’s winner and battle to beat the course record. The athlete with the best time wins $10,000. This winner is then brought back each time to defend their title and can do so multiple times and win tens of thousands of dollars.

My episode, the 18th, closed the third season. It’s so funny to watch the show and see all the girls “trash talking” one another. Most of us got to know each other really well, and we are very good friends. I made it to the third round and faced Cassidy Watton in a showdown to determine who would move on to the Skull Buster. I knew Cassidy would be a tough competitor. I have raced with her before, and I know firsthand just how phenomenal of an athlete she is. She’s an even better person. So, I was glad that it was she and I at the end. As much as I would have loved to have been the one moving on to the Skull Buster, Cassidy won the day—by a hand. My people and I were not too thrilled about that, and we demand a rematch! But, despite my failure, I was really glad to see Cassidy beat the course time. I wish her the best of luck in the next season. 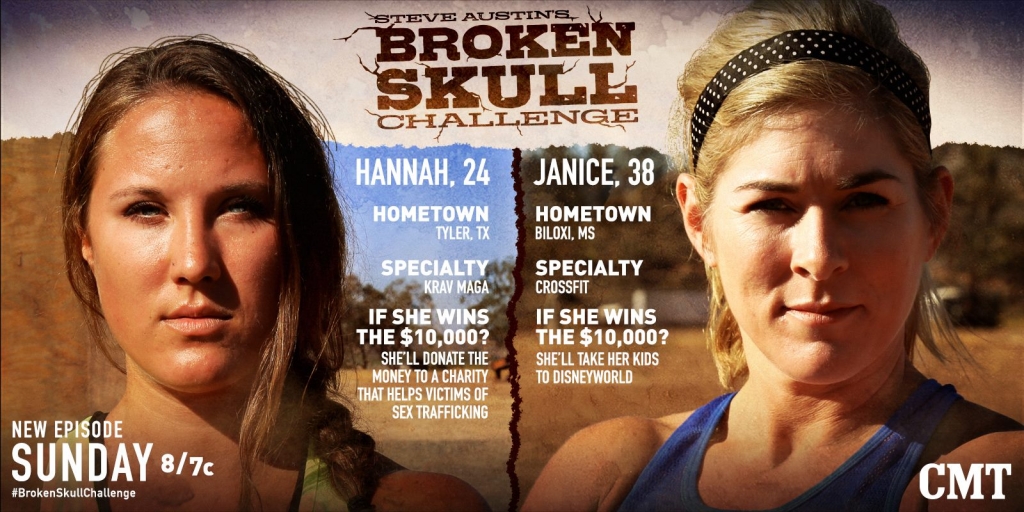 Over the last three seasons, we’ve seen some well-known obstacle racers compete. The draw of the show for OCR racers is certainly the promise of making it to the final round to face the Skull Buster. For those of us who have years of diverse OCR experiences under our belts, the Skull Buster appears on television to be a warm-up. I’ve been watching the show faithfully since the first season, and I know I’m not the only obstacle racer who has watched someone failing at what I would consider a mundane obstacle and wishing I was the one doing the course. I just know I could win the $10,000!!

But, not so fast!! While the promise of the $10,000 payday on a half-mile obstacle course, against a previous competitor who could barely climb a rope, is alluring to most any competitive obstacle racer, let’s not count our chickens before they hatch! You have to be able to get to the Skull Buster first. And battling the caliber of men and women who come to the Broken Skull for their shot at the money is no walk in the park. It takes a whole lot more than obstacle racing prowess and skill.

If you’ve been keeping up, you’ve noticed that many athletic background specialties have been featured over the past three seasons: boxing, wrestling, jiu-jitsu, weightlifting, bodybuilding, first responders, military and more. CrossFitters and Obstacle Racers are probably the most successful.

There have been plenty of obstacle racers facing off in the show this past season. The top winners at this point are two Spartan Pro Team members, Cassidy Watton, and Hunter McIntyre. Of all the racers out there, these two seem to be a great fit for a challenge such as this. They are both very well-rounded athletes. I bet any of the racers you have seen on the show would certainly agree with me that it takes a lot more than just OCR skills to earn your chance at the Skull Buster, and setting a time that brings you a weekly $10,000 paycheck. The ideal Broken Skull competitor has to be balanced across many athletic domains.

Top skills an athlete needs to succeed at the Broken Skull Challenge:

When you’re a 5’5”, 140# female who is able to do a 300# deadlift, 250# back squat, 50# weighted pullup, and 145# bench press, you can impose your will on someone a lot more effectively. Having absolute strength is a must if you want to have your way with someone in the physical challenges—especially if you have no background in martial arts, grappling, or wrestling.

This is not a wrestling or Jiu Jitsu match. Any time there is a challenge on the show that requires you to engage with someone, there’s a purpose other than submission or earning style points for takedowns or passing guard, etc. You simply need to be able to impose your will on your competitor to achieve the specific goal of the competition. For example, in the Pit, you just have to get the person out of the pit. Submission, arm bars, and rear-naked chokes aren’t even on the agenda. However, I do believe experience and skill development in those disciplines would certainly transfer well in helping you to keep your wits about you, and think quickly on how to use leverage to get your opponent in whatever position you need them to be in.

Most of the challenges last less than two or three minutes. You must be able to move heavy weight, or another person, very quickly and without getting gassed. And if you want to be at your best in the Pit, on the third round, there is no option for you to neglect this. Long distance training is helpful for your overall aerobic foundation, but you must do high-intensity interval work. The Pit is a very well-thought out test. Athletes will spend 3-5 minutes moving a heavy object and running, and then must immediately be ready to engage with someone in the pit afterward, and keep their strength. Many people have strength, and many people have endurance, but very few have the ability to maintain a high percentage of their strength while their cardio system is taxed. Even the Skull Buster, for a top athlete, is only about a five-minute workout, depending on the length of the physical contact in the fight.

Inner confidence and a Gritty and tenacious personality and character

In today’s society, we seem to have put such a negative stigma on people who would engage physically with another person. So, there are not many civilian people in our society who have ever been in a situation of hand-to-hand combat. It can be an uncomfortable place if that confidence or “mean streak” isn’t there. Martial arts or combat training and experience can certainly help alleviate some of these nerves, but I believe the best way to have inner confidence is to know that you possess all of the physical skills we have talked about—meaning you have done everything you can to prepare physically, and to top it off you have that inner warrior inside who is ready to crush the soul of anyone who stands in your way. You don’t have to display that persona in your daily life, but that heart and tenacity lives inside of you, and if you can harness it, you can be very tough to beat.

If you feel that you have all of these qualities, you should certainly apply for the show. This was a great experience and something that I will always remember. In fact, I have already reapplied and sent several emails. This competition was made for a gritty farm girl like me. I want my rematch with Cassidy or another shot to get to the Skull Buster.

Broken Skull Challenge is currently casting for the fourth season.

About the Author: Janice Ferguson