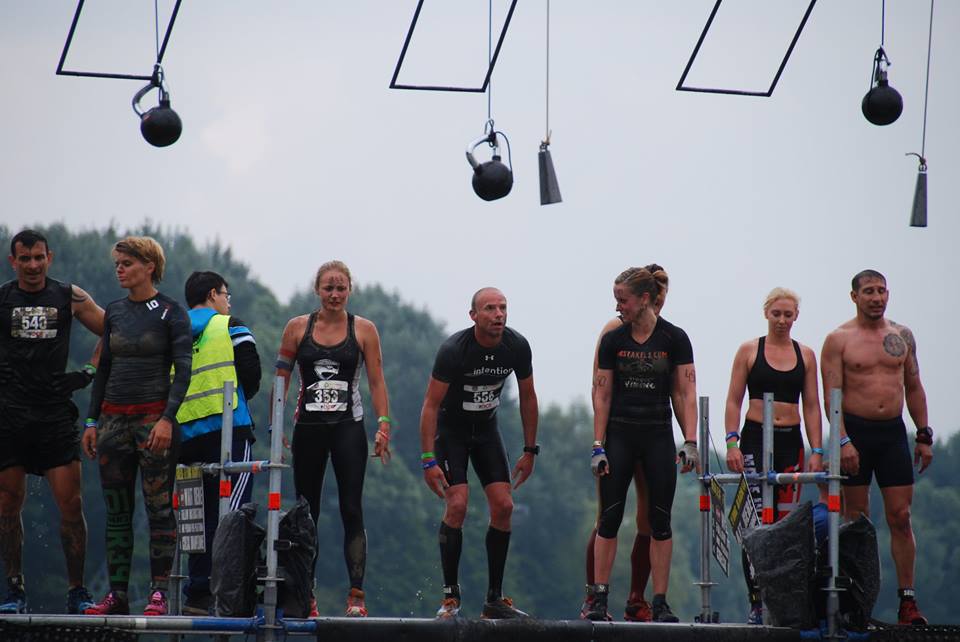 Wow…what a weekend! The North, South, West, and East were all represented by thousands of you muddy, amazing humans! From the beginner to the best, you all came out and represented in full force, and we love you for it.

We had Spartan Races coming out our ears, and with Warrior Dash, Tough Mudder, Terrain, BattleFrog, Savage, True Grit, Rugged Maniac and Strong Viking, we saw many of our usual welcome suspects peppered across the globe. They also held a little event in The Netherlands this weekend a few of you may have heard about. 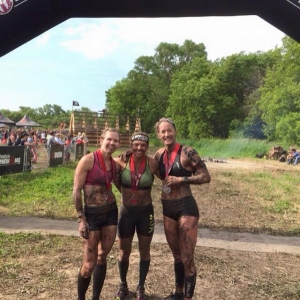 With a double-header of Sprints in the Tristate area and Chicago boasting both a Sprint and a Super, there were plenty of opportunities to get dirty, Spartan-style this weekend. Robert Killian made a bit of muddy history by taking 1st in both the Super and the Sprint in Chicago, but instead of resting up between the two, he put himself through a brutal Hurricane Heat, and finished with a smile. Incredible.

We spoke with Jason Moody at the Chicago race, and he had this to say about his experience:

“The predominately flat course consisted mainly of corn fields and single-track trails. For those who like soft, shoe-slurping, ankle-deep mud twisting through woods like meandering deer trails, this course brought that in spades. Though there was not much in the way of elevation change to sap racers' calves and hip flexors, those mucky 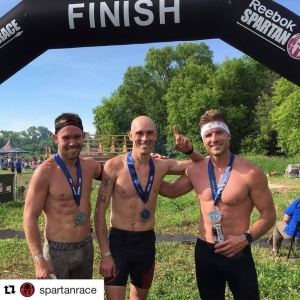 trails took up the slack. The clear sunny skies and temperatures in the 90s combined to provide its own stamina-draining obstacle.

The obstacles were fairly standard Spartan fare, and the race ended with the incline rope wall (more affectionately called, “the Batman and Robin climb”) followed by the large A-frame structure with the wall at the bottom and the confidence climb above. Many racers were cramping up by this point, either needing a boost up the wall or a moment to rest on top of the wall to massage their failing legs.

Of Note: this was the day four of the “Friday Night Lights” cast was reuniting to run the race as part of a Marriott Rewards promotion. Rose Wetzel helped train them, and after running – and winning – the elite heat, she turned

around and ran it again in support of the FNL festivities. All in all a good race day and many racers were planning to turn around and run the Sunday Sprint the next day.”

The Saturday Chicago Podium gave us Robert Killian, Brian Gowiski and Ryan Kent for the men, and Rose Wetzel, Kristin Saad and Janet Barry for our women.

On Sunday we had the dynamic duo again of Robert Killian and Brian Gowiski with Mike Ferguson taking third. Sunday’s women were Heather Gollnick, Sarah Pozdol and
Julie Hartjes 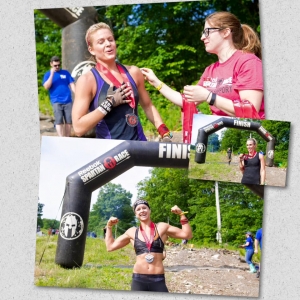 Up on the Tristate podium on Saturday, we had Ryan Kempson, Ben Kingsinger and Liam Collins for our men, and for the women we had Jackie Landmark, Broken Skull Challenge Female Champ, Cassidy Watton and Katie Huber

Despite the classic Southern June heat, thousands of racers came out to experience the family fun that is Terrain Race for the first time in Georgia this weekend. MRG’s Chris Lewis was not going to miss the experience and had this to say about his day on the course;

“Driven by a registration price that remained low until race day, several thousand people turned out to check out their Georgia debut.  They had the standard fare of obstacles – multiple height walls, rope climb, rope swing, tire flips, heavy carries, crawls, and of course their signature obstacle, monkey balls, consisting of a row of climbing holds, followed by some hanging balls.  This obstacle typically claims the most competitive wristbands, though on a day like this weekend, I have a hunch a decent number of people chose to “fail” just to cool off in the water below.”

Continuing his reign at the top of the 10k Terrain podium, was Yuri Force, joined by Victor Quezada and Chris Acuff and making a splash for the women were Rachel Watters, Morgan Worst and Alissa Marcolongo

For the 5k we had Philip Smith, Hobbie Eckes and Bob Brannan joined by Kirsten Mekelburg, Elizabeth Skipper and Cora Atkinson 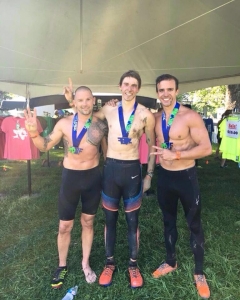 Mint Juleps and Mud…two great tastes that go great together. 100+ degree heat did not stop these hardcore southerners from coming out and having a blast, and trying their hands at what this grip-strength testing race series had to offer.

FC Spartans’ Bobby Walton brought the whole family out to give BattleFrog a try for the first time ever, and loved what he experienced.

“Every OCR has walls – There are always nets, and mud crawls. But there were some that were new to me. Tip of the spear for instance. This I had seen but never done. It was not as easy as I thought it would be. Core strength played a huge roll and grip strength as well. Grip strength seems to be key for the majority of the obstacles. The monkey bars were great. The fact that the bar moved was nice. Also you had to climb up and then down. This was new to me as well. The rope climb was a challenge also. Most rope climbs, you can really use your legs, but here, not as much. It was more arm and upper body to walk up the wall – like a repelling form, except walking up with no catch. 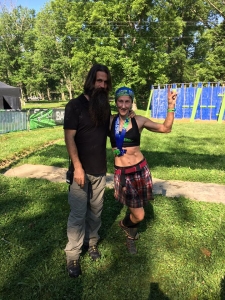 The rig was a blast. Rings and rope are easy parts, but there was a single bar and swing here also. Again testing core and grip strength. The square bar is the hardest because you can't swing your hands around. They stay fixed but your body had to arch out. Get the next bar and again all momentum, core, and grip.

All in all it was an amazing event. Family friendly for the entire day as well.

Of additional worthy note, The table for one ceremony was amazing. Being a veteran it meant a lot to me that they did that.”

Taking the podium this weekend were both some familiar and some new faces. For the men we saw Ian Hosek, Alex Stephens and Jamie McCart and the women were Laura Hunt, Heather Moss and Jenn Kohlbeck

We also want to give huge kudos to Mia Tornudd, for not only taking first place for Women’s Masters, but also was the first female overall. Amazing, Mia!!! 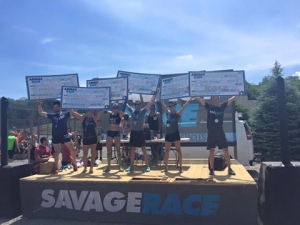 Always a HUGE favorite for their innovative obstacles, incredibly fun festival area and overall feel, Savage Race once again rooted themselves as one of the industries’ darlings. This weekend’s podium showcased the power couple of Ken Corigliano and Rachel Corigliano taking first male and female, and were joined by Jordan McDougal, and Ryan Rivamonte for the men and Jamie Stiles and Erin Brooks for the women. 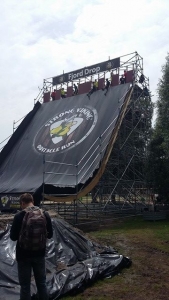 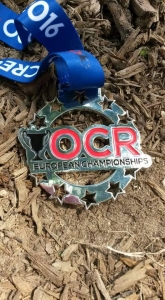 If there was one event I wish I could have been at this weekend, this was it. The excitement leading up to their inaugural event was incredible, and according to the continuing buzz after the fact, it was well warranted. Even the illustrious Mister Mouse showed up and wowed the crowd while taking endless pictures with so many who truly appreciate what he has done for our beloved sport. While they are still working on the official results, everyone who crossed that finish line deserves enormous respect for completing what is being called a truly grueling course.

Gail Ryan was kind enough to muster up some reserve energy after finishing and give us this recount;

“The OCR European Championships was a fantastic event. The course was extremely difficult, and anyone managing to cross that line with their band intact should be very proud. It was so challenging, that there were difficulties filling the podium positions, particularly in the female races. And some of the smaller women found it very difficult to get over the very first wall before the race even started! The use of the sweeper was something I had not experienced before, and resulted in many bands having to be handed over, because of lack of time.

A far cry from the OCRWC where participants literally spend hours at several different obstacles in order to keep their bands. The obstacles themselves seemed to favour a more natural effect, with many of the larger obstacles built with wooden poles and lots of ropes to climb and traverse, and the wooden clogs were a very nice touch on the last obstacle.

Terrain wise, the course was mostly flat, with a long stretch of country running with limited obstacles, adding miles to the course, with a lot of water and some big jumps into the lake – this was the water edition of Strong Viking. All in all a fantastic event and a slick show, considering it was the inaugural event. Medals are fantastic and look very cool. Will definitely be back next year!”

Check back with us later in the day for updates on results as they come available.

Thank you to everyone that contributed, and to all of you that keep our sport thriving and growing!