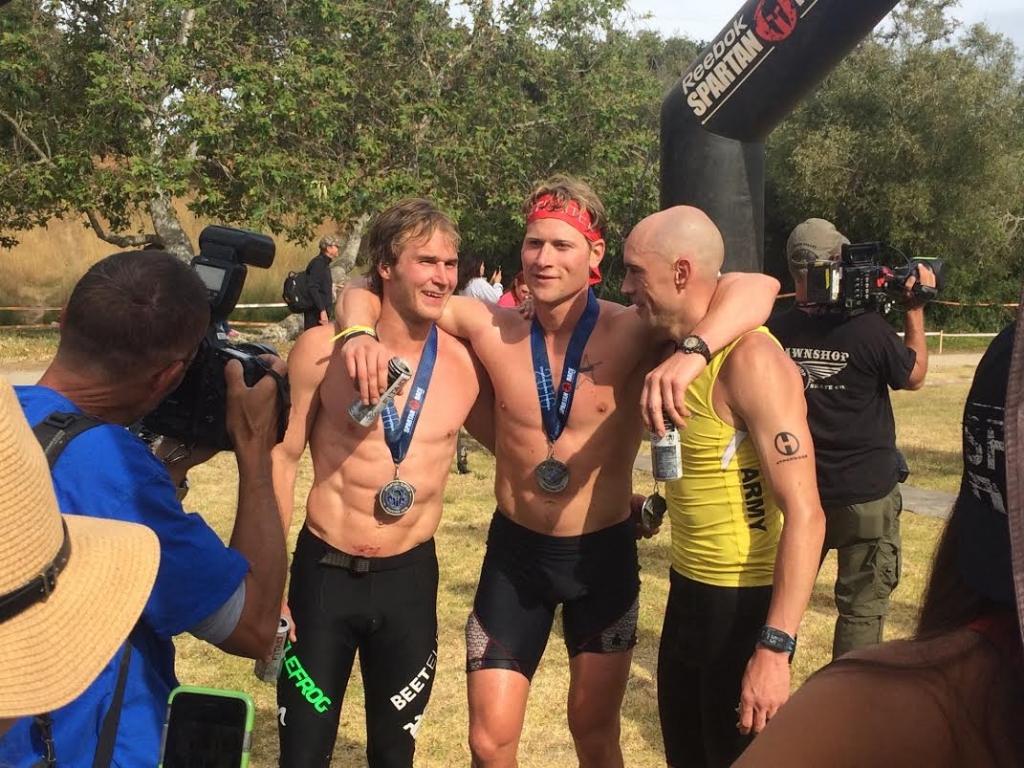 This past weekend the Monterey Spartan Race Super marked the 2nd race in the NBC Spartan Series, in Monterey, California. As such, it drew a huge crowd to this otherwise sleepy coastal town, and this included a completely stacked elite field. I don't normally pay too much attention to the elite runners; in many ways they are almost a different species from the rest of us and I'm usually on the course before their race is over. This time around, a little later start time of 10 AM afforded me the opportunity to watch the end of the elite races and it couldn't have been a more exciting finish! 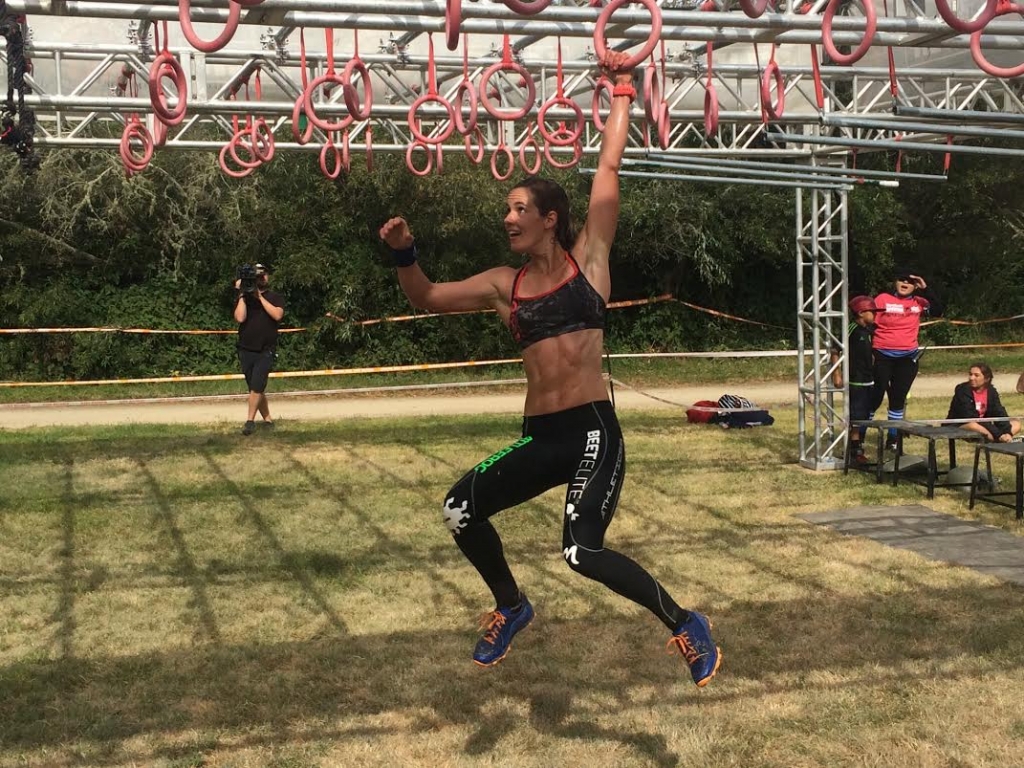 Spoiler alert – if you're gonna watch the NBC series and want the anticipation of not knowing, skip the next paragraph.

Hunter McIntyre was leading the field up until the new Tyrolean ladder obstacle, where he was passed by spider monkey Ryan Atkins, who went on to finish the last few obstacles and take the top spot, followed a few seconds later by Hunter, and with Robert Killian hot on his heels. A little over a minute separated the top 3 men across a nearly 9-mile race. For the women, Lindsay Webster took the top spot, with Faye Stenning taking second and Rose Wetzel maintaining 3rd after she lost her grip on the Multirig. Fortunately for her, the 4th place woman also failed the Multirig, allowing her to maintain her lead through the penalty burpees. 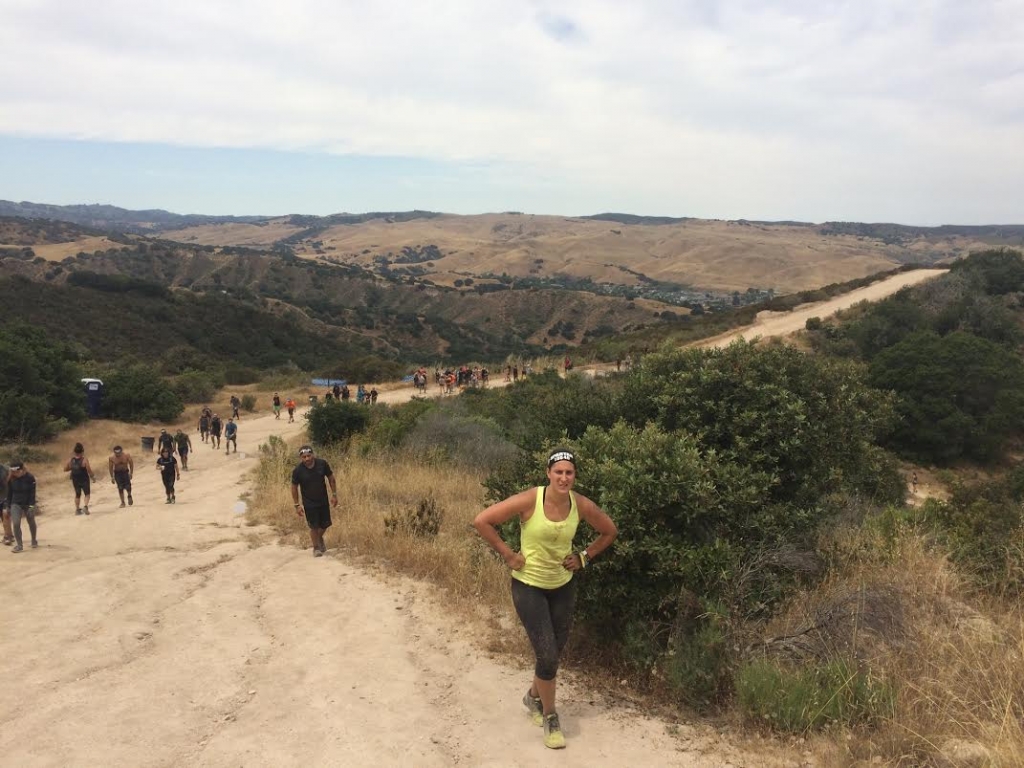 Then it was our turn. My wife and I hopped over the wall into the start corral, waited for the obligatory “AROO! AROO! AROO!”, and started running. The beginning of the course was relatively flat for the first few obstacles, then it took to some single track and we started in on the hills. After the first climb, we hit the A-frame cargo net, monkey bars, and a barbed wire crawl through the sand that started flat, then turned a corner and climbed a short hill.

After this, the course was a bit of a blur; a combination of steep uphill climbs with run-able declines and some tough obstacles in the middle including the rope climb and a relatively short but steep and treacherous bucket carry (Note: This bucket carry was apparently much longer for the elite and early heats but was cut shorter before we arrived). 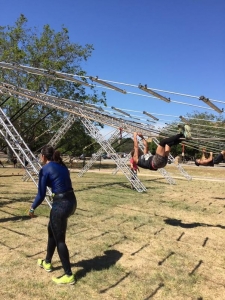 A loooong uphill slanting single track connected to a steep fire road with the second part of the memory obstacle at the top (~5-6 miles after the memorization board). This was followed by a long but fast downhill to the spear throw, which led into the final gauntlet of obstacles; the atlas carry, rolling mud, dunk wall and slippery wall followed by the new(ish) Tyrolean ladder. Although I've heard a few complaints about this one, I personally found it easier on my body than the rope traverse, although with some of the bars damp from the water obstacle it was important to check your grip on each bar before continuing.

After the traverse came the Z-walls, followed by a bridge over the entrance that involved walking over spaced boards across the top (instead of the usual cargo net). On the other side of the bridge was the Herc hoist and the Multirig before the finish line. This gauntlet was clearly designed to maximally stress our arms and grip strength, and the failure rate on the Multirig was a testament to that. No fire jump here, as the venue won't allow it; just a quick sprint across the line. 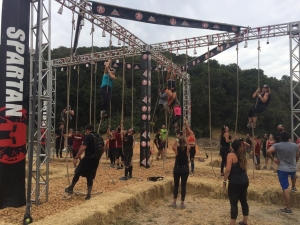 Monterey is one of my favorite venues. It has a great mix of sun and shade, hills and flats, technical single track and more run-able dirt access roads. The festival area was in a gorgeous park with majestic trees providing shade all around, and this translated into more people hanging out and socializing at the venue after the race.

Overall, the Monterey Spartan Super was a challenging and varied course. Although there was nothing truly new here (the Tyrolean Ladder is more a twist on an existing obstacle than a new one), the layout of the course and creative obstacle stacking added challenge for most of us. The races for the top of the men’s and women’s podium were exciting and fun to watch, and the venue was well laid out and conducive to people staying after the race.