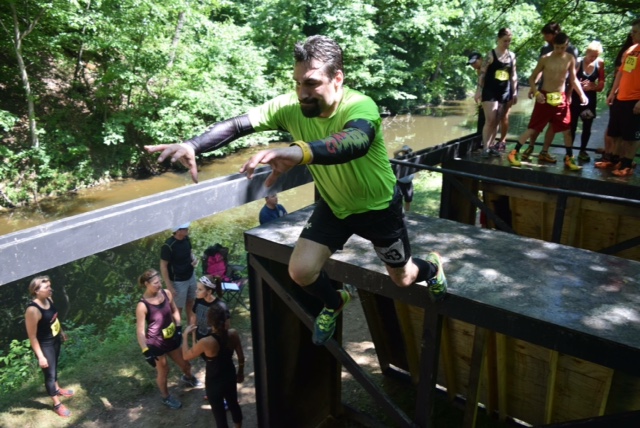 Just a Walk in the Park…

That was an interesting way of looking at the event for the day; the Indian Mud Run in Coshocton, Ohio.  Held at the Coshocton City and County Park, today was the setting for an epic OCR event.  Located east of Columbus and south of Cleveland; this venue allowed for competitors to attend from multiple directions.  The drive-in was as much as a challenge as the course was.  Rally racers dream as the windy country roads twisted and turned all the way to the park.

Arriving at the park, we were ushered into the parking lots by Coshocton’s finest; which was welcoming as it turned out that there was no evidence of a bag check present at the event.  A short walk down the path led to the main event area.   The location was well laid out with a merchandise table, food vendors, and results tent near the finish line.  One area of opportunity (aside from the lack of a bag check) was for more porta-potties.  Only a few of these pre-race staples were present at the event area.  Once registration was complete, it was a small walk back down the main road to the start. 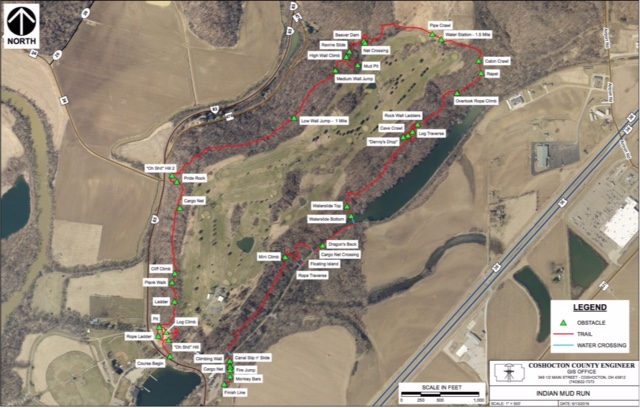 A quick briefing of the course and the Indian Mud Run was underway.  We left the start only to be met abruptly with the first challenge.  “Oh S*&t” Hill appeared from around the corner.  An arduous leg-burning challenge to being the race was the first obstacle to tackle.  Eclipsing the hill, the environment took over.  Very interesting topography quickly came into view as we entered the park.  A quick hop over a log climb took us to the first major obstacle.  Hanging ladders were suspended overhead.  With no anchor other than the top of the hill, the swinging ladders made for a solid challenge to start the event.  Clearing the ladders led deeper into to the forested area of the park. 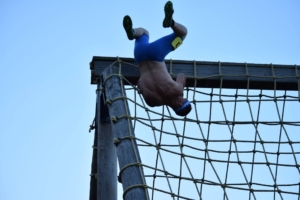 A small clearing appeared in the trail adorned with a large cargo net climb.  The ropes had a fair deal of slack, slowing the climb.  Once we had found our way back to ground level, the second “Oh Shit” hill presented itself.  Never allowing your legs to recover, the creation of Hubie Cushman, kept the competitors churning at every opportunity.  Once this brutal back-to-back challenge was over, it was a nice run through the woods.  Great rock formations and scenery sped by.  Anything short of a GoPro video would not do it justice.

Those rock faces mentioned above would now be put to use.  A rope climb and back down another section of the rock was up next.  Dry ropes made for easy work for most and quickly took the competitors up the hill.  Once past that, we ran into a valley in the rock formations.  Unfortunately, a few others and I missed the trail marker; and took a detour through the valley.  Regaining our way, we were met with a large net spanning the ravine.  The spacing in the netting allowed for decent footing, as long as the height didn’t get the better of you.  Exiting the net took us off to another trail winding through the pristine woods. 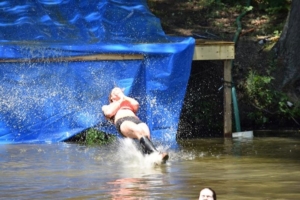 Gliding down a hill back into the woods took us to a quick pipe crawl and onto the “cabin crawl” obstacle.  A unique challenge starting off by crawling under the structure, being presented with a wall, climbing to the next level while crouching under the ceiling, and back out into the light.  A fun obstacle that was one I had never encountered prior.  The path then led to the section of the park flanking the canal.  Water was almost non-existent in the course until now.  However, before the trail winding down; we still had another climb to keep us focused.  Another ladder climb framed out a large rock face.  This time, the ladders were resting on the face of the rock and allowed for a much quicker climb.  Once we found the top, another path led us straight back down.  And did I say something about water…….?

What’s the quickest way down…….well a water slide of course!  A giant water slide came into view.  Once the competitors made it a few feet down the slide, it was a rapid acceleration as we sped down the slippery surface.  After what seemed like an eternity of bouncing around, blinded by the spraying water; we were launched of the end.  Crashing into the canal followed by a short swim across the canal.  With the assistance of the local firefighters, we were offered a helping hand up to leave the canal. 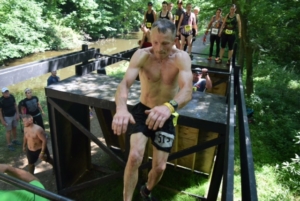 Still soaking wet, we met the Dragon’s Back.  A replica of one of the obstacles from OCRWC, Dragon’s Back is equally a mental challenge as it is physical.  As with OCRWC, many competitors stood on the top daring themselves to take that leap of faith to the next platform.  On my fist attempt, my fear of wet hands was realized as I met the bar only to have it slip from my grasp.  I slid down the facing board of the second platform.  The Dragon had defeated me; at least for that attempt.  Not wanting to lose my band, I eclipsed the Dragon and defeated it.  Now itI was back across the canal over a large cargo net partially submerged.  Not staying on that side of the bank for long, we crossed back over on a series of floating platforms, bouncing and wobbling the entire way. 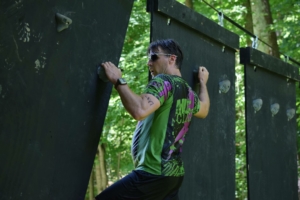 Not to be outdone on the criss-cross of the canal, the 2nd to last wave involved a rope traverse back over.  Always a challenge no matter the method of crossing, it was back to the other side.  Before nearing the finish, the last crossing was met.  A series of hanging panels were suspended over the canal.  A board at the bottom and climbing handholds were the only way to make it across.  Finishing the last board, it was a quick slide down the rope.  A few hundred yard jog and a baby brother of the original water slide brought us close to our goal.  A challenging climb a series of platforms was next.  The first section was vertical and involved very small rock climbing hand/foot holds.  The second section, by comparison, was much easier, allowing us to go over the top, and down to the Destroyer. 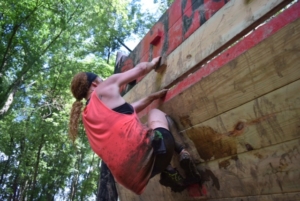 The Destroyer was the same obstacle unveiled at OCRWC last year.  A deceivingly challenging obstacle.  The lower section being angled away from the competitors with a vertical section separated by the narrowest of hand holds.  Skill and technique were paramount to defeat the Destroyer.  With our arms taxes from the gauntlet of previous obstacles, we were met with the last impediment to our goal.  A giant 40-foot span of money bars were still required to be conquered.  And did I mention that every other rung spun in the housing?  A quick recommendation from a team member and I completed the monkey bars in a sideways motion.  An amazing feeling of accomplishment, and a quick trudge through knee-deep mud led to the finish.  Can’t finish an event clean now, can we?

At every turn, the Indian Mud Run was an amazing event.  Well thought out and executed, the use of natural and man-made obstacles were the perfect combination for a great event.  Who would have thought that a walk through the park would leave you so exhausted!

Another unique thing about this event is the trophies for the top 3 of every age group.  Indian tomahawks were presented as this award for finding the top of your age group.  A medal and t-shirt were also provided to all competitors.  A unique side note on the shirt is the addition of the top finishers to the back of the shirt for the following year.