An eight hour drive on a Friday afternoon through desert roads that reached 118 F.  Setting up a tent in the dark.  Post-race thunderstorm, and damp sleeping bags from not sealing the windows before we went out.  Getting up early on Sunday morning and facing another 8h long drive home.  All of these were totally worth it for the chance to run the Terrain Race in Flagstaff on Saturday. 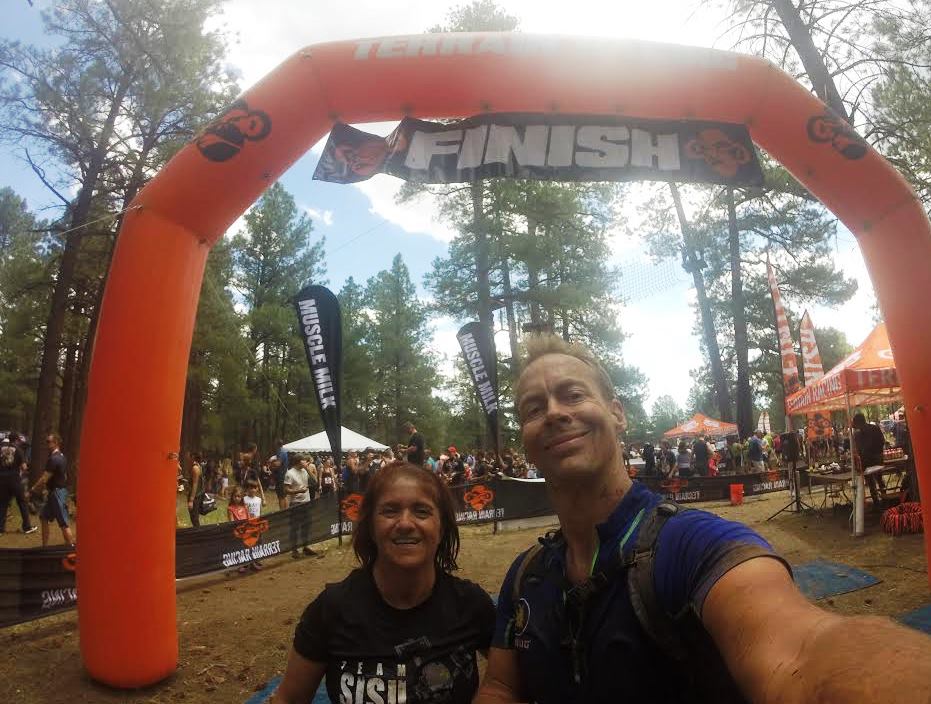 Other races have a much larger media presence, and no one would consider Terrain Race one of the “big three” (or even one of the big five) in obstacle racing, but this year Terrain Race has quietly ramped up their operations from offering 5 races in AZ and NV to producing 22 races nationwide.

This weekend was their “homecoming” race in Flagstaff, AZ, and definitely represented the best that this series has to offer.  Clearly, I’m not the only one to think so, as attendance numbers for this “small” race topped 5000 runners.

Although Arizona in July is rarely a selling point for most people, the elevation of 7000’ above sea level translated to much cooler temperatures, making for nearly ideal running weather.

The race venue was Fort Tuthill County Park just south of Flagstaff.  This gorgeous county park boasts multiple hiking, biking, and equestrian trails under the tall pine trees.  Additionally, it hosts a sizeable campground and Flagstaff Extreme Adventure Course; a treetop rope, zip line, and obstacle course.  It’s definitely fun to be running the Terrain Race and watch people zip lining or climbing across cargo nets far overhead.  In previous years, I’ve done the Flagstaff Extreme course after the Terrain Race, and if you have the strength and stamina for it, they make an awesome combination. 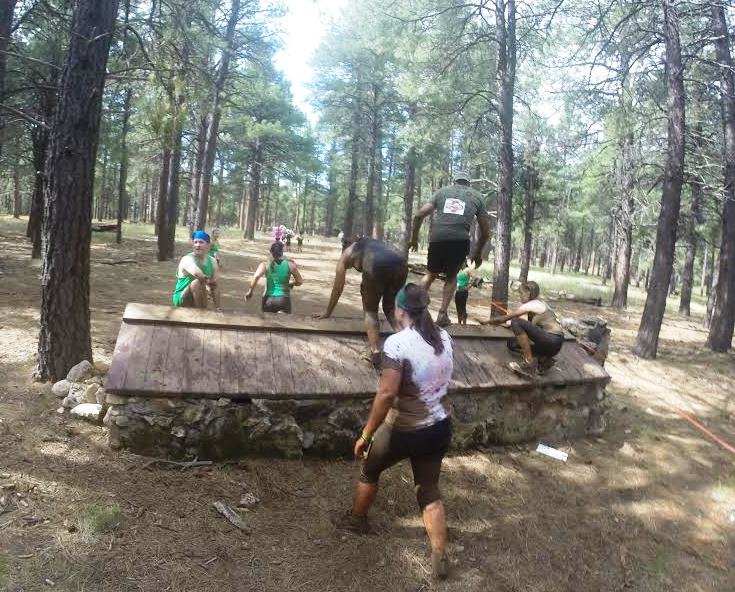 Terrain Race offered both a 5k and 10k option, and having run both, the courses were quite different. The 5k was obstacle heavy, particularly since it made extensive use of the in-place equestrian jumps to scramble over; while the 10k branched off the 5k after the first couple of miles and included significantly more trail running through the woods and a few additional obstacles including a Tarzan swing and heavy tire drag.  Overall the race was pretty flat and fast with only a couple of very mild climbs thrown in along the way. 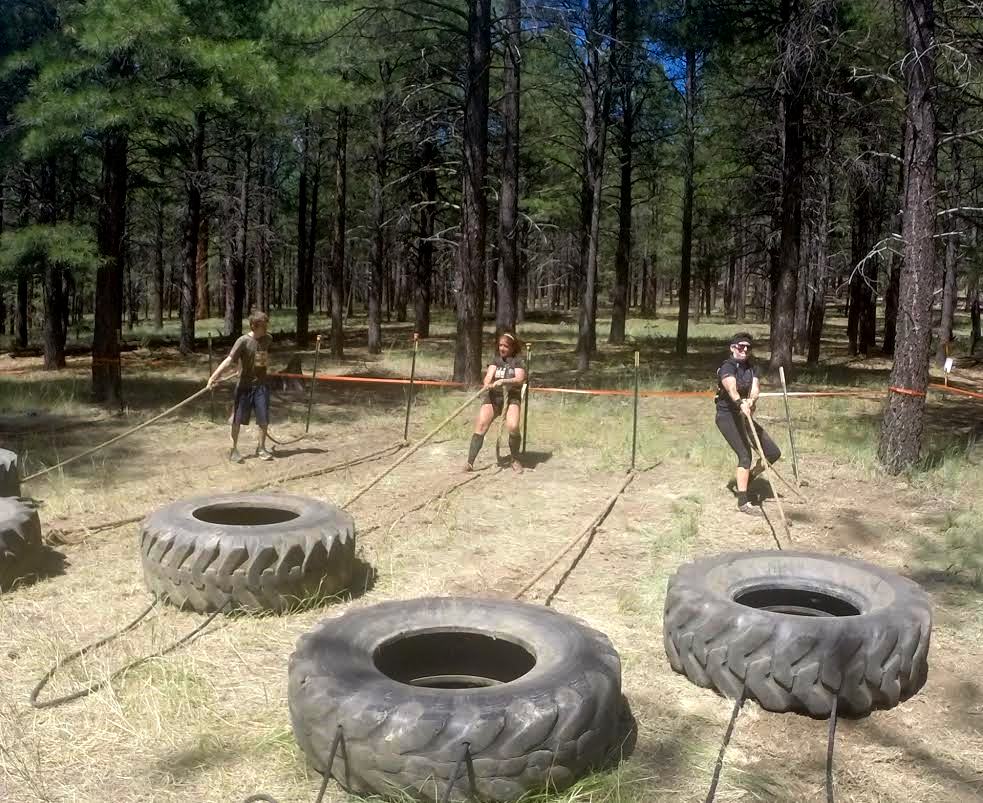 Both 5k & 10k races started by soaking the competitors inside a trio of above-ground pools, where racers waited for the starting cannon to start each heat. 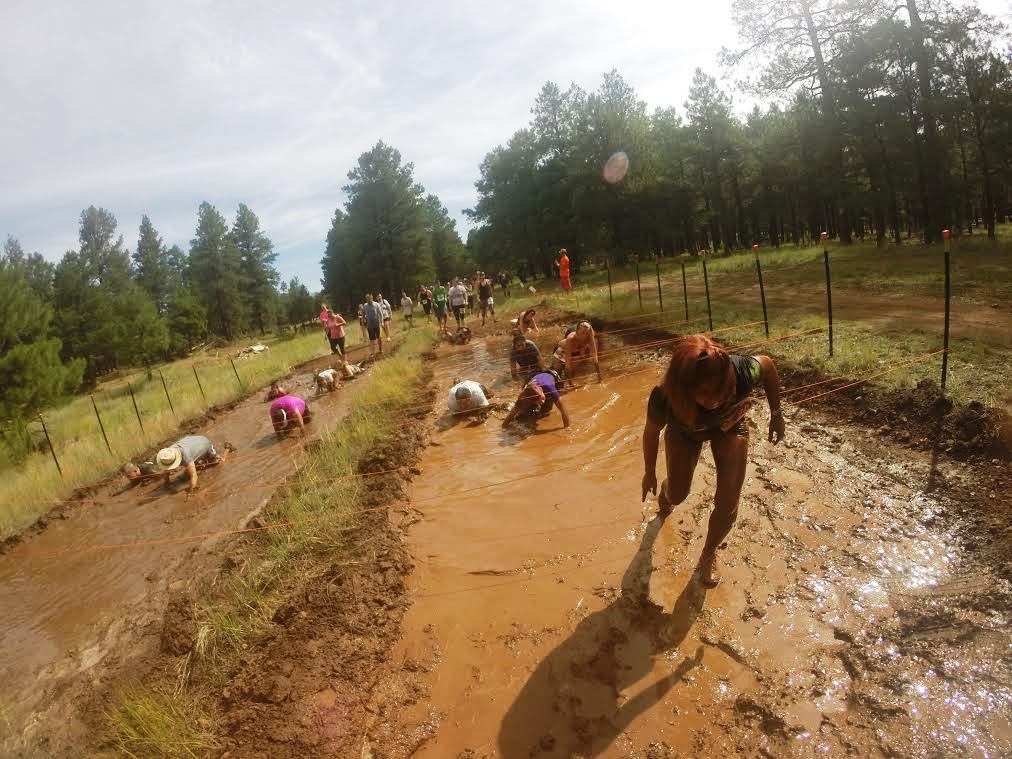 The obstacles, in general, were a great mix of mud crawls, walls (6′ and 8′), monkey bars, some strength obstacles including a rope climb, a short Wreck Bag carry and tire flips, and a few of Terrain's signature obstacles, like their “Gorilla Grip” obstacle which was a traverse across rock climbing holds over a pool, and their horizontal cargo net crawl (which this time was right before the finish line). 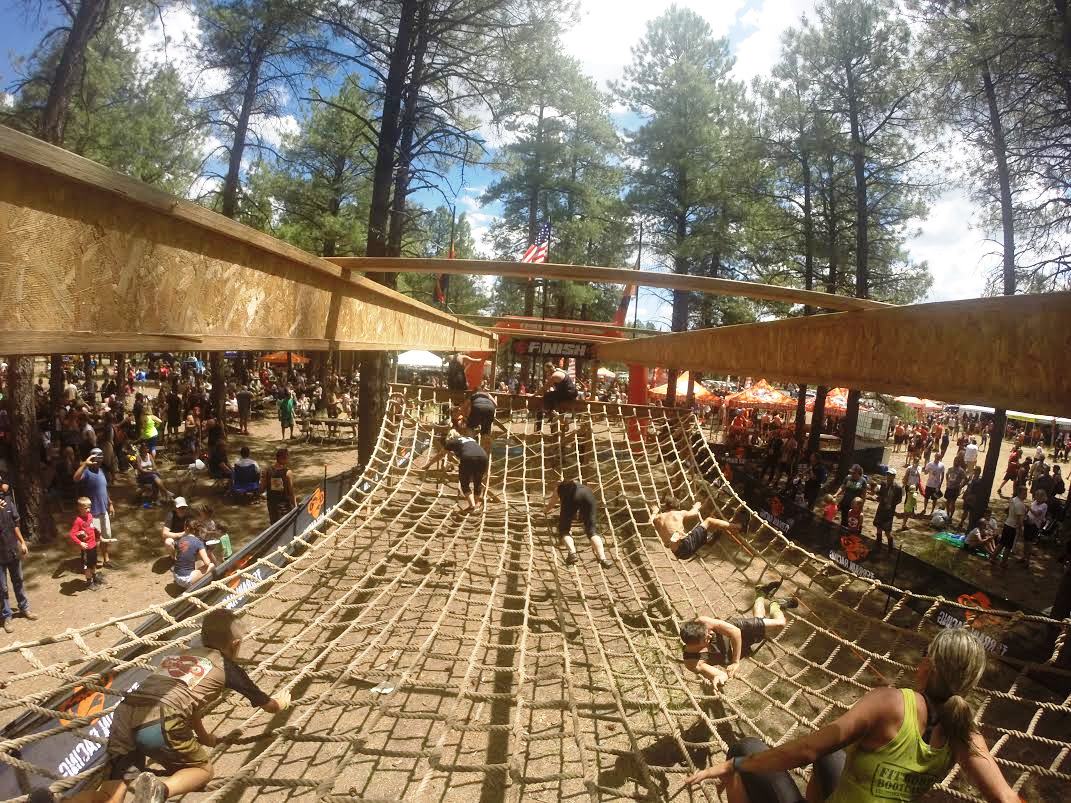 The last time I ran a Terrain Race in SoCal there were some complaints about the difficulty of the “Gorilla Grip” obstacle.  That incarnation had half rock-climbing holds bolted in place, and half hanging balls to traverse.  This time around, they switched it to all stationary rock-climbing holds, and this reduced the difficulty level enough to make it a much more attainable obstacle for many racers.  There were still plenty of splashes into the pool, but in the world of “bands over burpees” this change was welcome and there seemed to be much less of a hangup of racers at this obstacle trying to keep their bands. 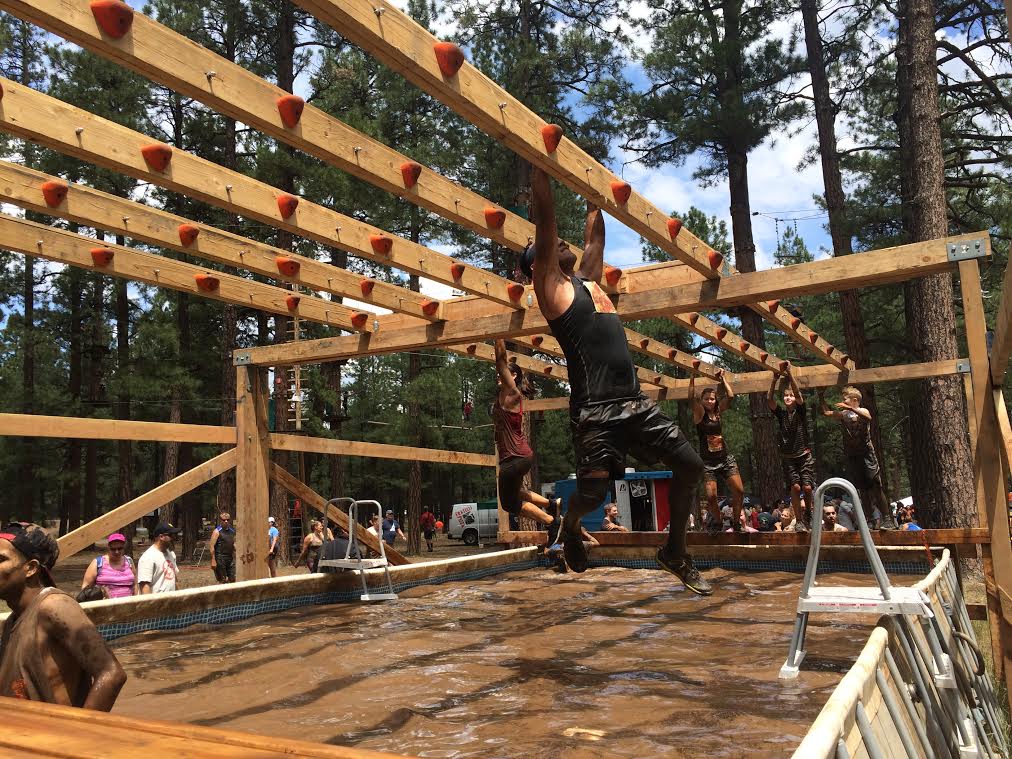 While the race is serious enough to attract some impressive athletes in the competitive heat (which features mandatory obstacle completion), it is clearly aimed at the casual racer; later heats were effectively untimed (timing chips were optional for a minor deposit), and runners on the course included multiple families with athletes as young as 7 taking on the adult course with their parents. In a similar vein, the obstacles had no penalties for failure to complete them, adding to the fun and casual atmosphere. 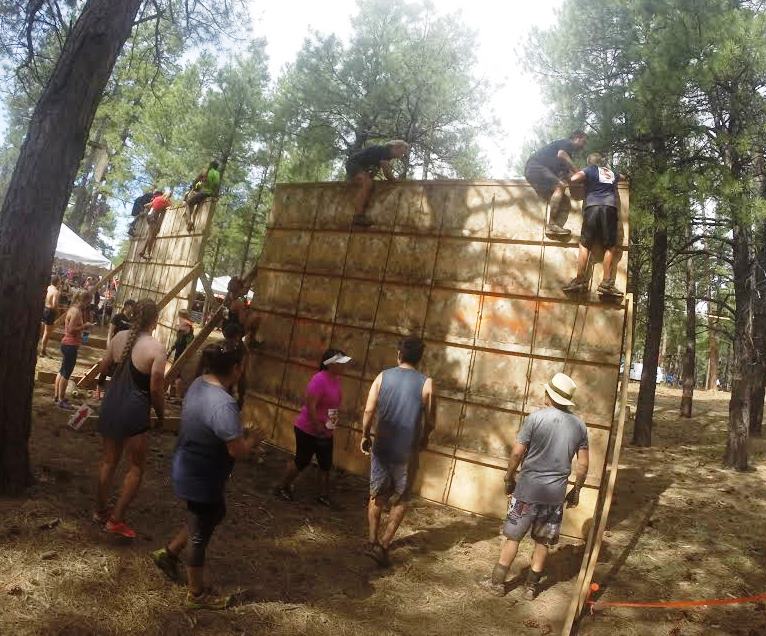 Oh yeah, and did I mention they also had a “Mud Monkeys” kids course on site for the little ones?  Because they did, complete with miniaturized obstacles to give the kids a challenge without being too daunting.

Once the race was over, the festival area encouraged people to hang out by featuring beer by Mother Road, a local craft brewery (why, WHY don't more races go this route for their post-race beverages?), food trucks including falafels and stone-fired pizzas along with multiple vendors like Corepower and Krave Jerky offering samples.  There was an official Terrain Racing photo area featuring multiple props to play with, and a few obstacles to play on.  Picnic tables were set up in the shade and many of the more interesting obstacles were clearly visible from the festival area for spectators.

The only complaint I could come up with for this race was the finisher’s shirts.  I’m really sorry to whoever designed it, but this year’s shirts are awful.  With an orange logo on a linen background, they aren’t flattering to anyone.  This is a bit frustrating, since last year’s shirt ranks among my favorites and is worn often, and they also have great gear for sale in the merchandise tents.  In the end, this is a minor complaint in an otherwise nearly perfect race with one of the coolest medals in the industry.

Overall, it was a fantastic, challenging and fun race with great obstacles on an absolutely gorgeous venue in a location that we don't get a chance to visit very often in the OCR world.