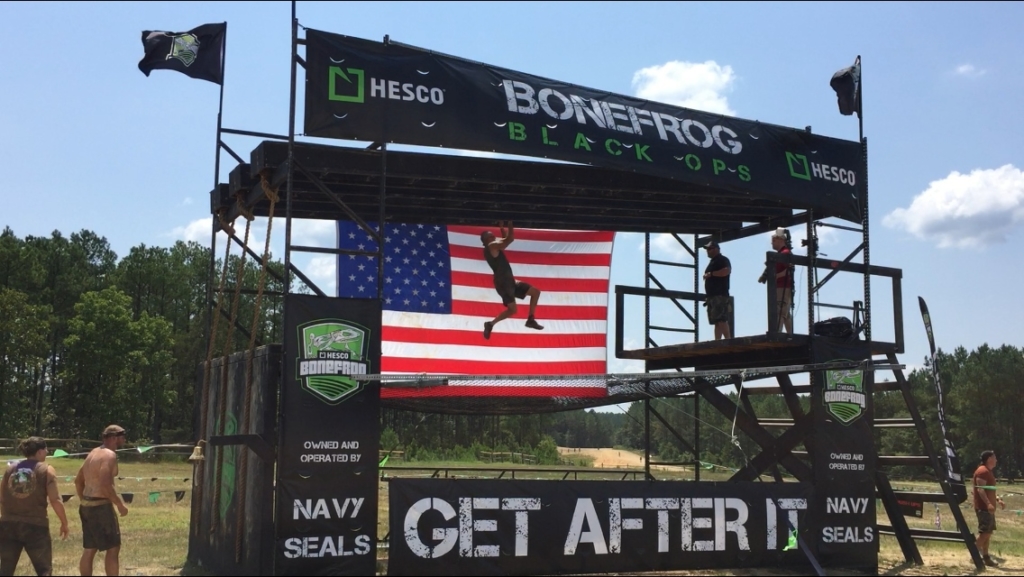 Bonefrog Challenge made its long-awaited debut in the South this Saturday at Carolina Adventure World (CAW) in Winnsboro, SC. CAW has hosted other races on the OCR scene such as Spartan and BattleFrog for several years, and Bonefrog is a welcome addition to the area. The more OCR’s, the better!

Then reality set in. Bonefrog, while having great intentions, is still a startup race only offering a handful of races all year. About a week before the race in SC, Bonefrog published their course map on their Facebook page. One comment to the photo said the “9 miler kind of looks like a trail run with an obstacle playground at the end”. Well, that person was right on the money. I passed and was passed, by many racers that made similar comments. This race was indeed a trail run with some random obstacles thrown in with an obstacle party at the end. 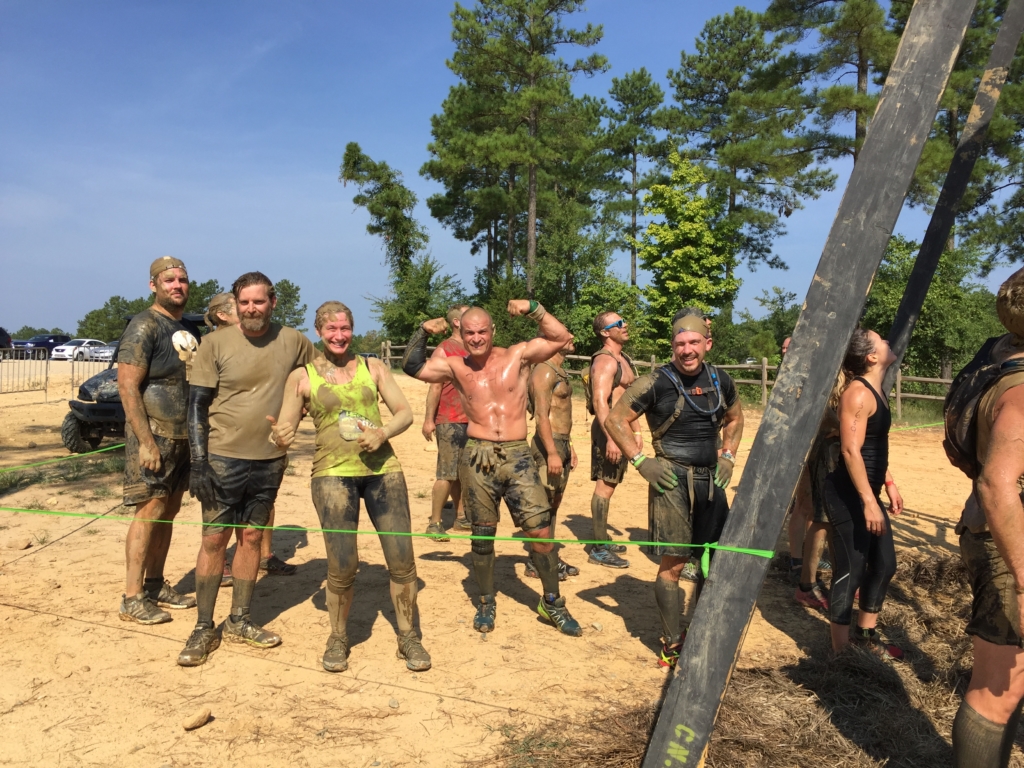 Near the beginning where the 4 mile course and 9 mile course split – I went the wrong way initially, as did others – It should have been a sign of what was to come. Looking at the course map (INSET HERE) you can see long stretches of trail with no obstacles whatsoever. Pretty disappointing from what many of us were hoping to truly be an obstacle every ¼ mile instead of 36 total obstacles that averaged out to be one every ¼ mile.

Bonefrog was well intentioned, I believe. Their biggest problem was turnout. It could have been the heat, the summer vacation month that the race was held in, or other reasons, but the overall event only drew around 800 people. The volunteer turnout was even worse. A couple hours into the day and volunteers were off many obstacles throughout the course. At the sandbag carry, we were told where to go by another runner that was on his 2nd lap of the 4-mile course. Several runners carried their sandbags down the wrong path and just left them at the top of the hill.

All that being said, the Bonefrog Challenge was a pretty darn good race when it came to the obstacles. I don’t fail obstacles. Ever… well except the spear throw. Anyway, I failed 3 obstacles at Bonefrog and got whammied by the memory challenge. Get a Grip got me twice, Walk the Plank got me, and Night Crawler took my soul. 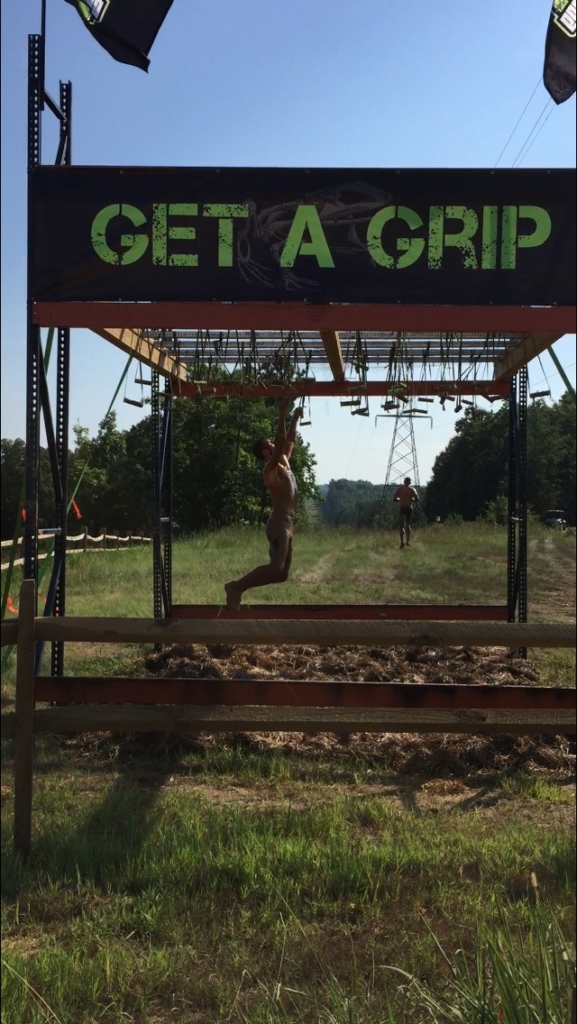 Get a Grip was super fun. You had to swing through a series of grips basically the size of a roll of quarters that were hanging by strings. I got to the last grip two separate times before I fell and I had to move on. Walk the Plank was a 20-foot balance beam that got ridiculously wobbly about 5 feet in. Picture trying to walk along the edge of a 20-foot logging saw and you’ll get the picture.

Night crawler was pure madness. Imagine 50 feet of burlap sack soaked in heavy mud that you had to crawl uphill in forearm deep mud. It was 95 degrees out from under the muddy burlap. Underneath it had to be 105. You couldn’t see, and you couldn’t breathe. After going about 20 feet in about 5 minutes in the muddy dark and getting kicked in the face a few times, I exited stage left and did my penalty exercise.

Not the obstacles that you’d think you’d fail? Me either! I crushed Black Ops at the end of the 9-mile course. Personally, I think this is the coolest obstacle ever. You climb up a 10-foot wall, Batman style walking vertically up a rope. Then you get to a platform with a 20-foot ladder of monkey bars above to cross and a cargo net to fall into 10 feet below if you slip. Across the backdrop of Black Ops is a giant American flag. This is a pretty hard obstacle with arguably the best photo op in all of OCR. They even have a bronze bell at the front of Black Ops if you choose to ring out and skip the obstacle. ‘Merica!!

Black Ops is Bonefrog’s signature obstacle that finishes the course. It’s also the last obstacle in an 8 obstacle playground over the last ¼ mile circle that adjoins the festival area. If I’m ever fortunate enough to do Bonefrog at such a small venue again, I might just spend an hour doing the last 8 obstacles in a circuit. It was that fun. 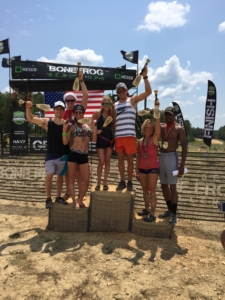 Did Bonefrog fall short on several fronts? Sure. But the small turnout meant no lines for concessions and a pretty hassle free festival area sponsored by the oldest beer in America, Yuengling. The t-shirt was decent and the finisher’s medal was pretty cool and was a great addition to my medal wall.

Overall I can only give them 3.5 stars. The miles and miles of trail running, while a good workout, was not what many of us were looking for out of an OCR that billed itself as obstacle heavy. Next time I will just run multiple laps of the 4-mile short course for sure. I also deducted stars for the lack of volunteers and support at the obstacles as well as the water stations. This OCR is capable of 5 stars. I can’t wait to see where they go in a year or two.