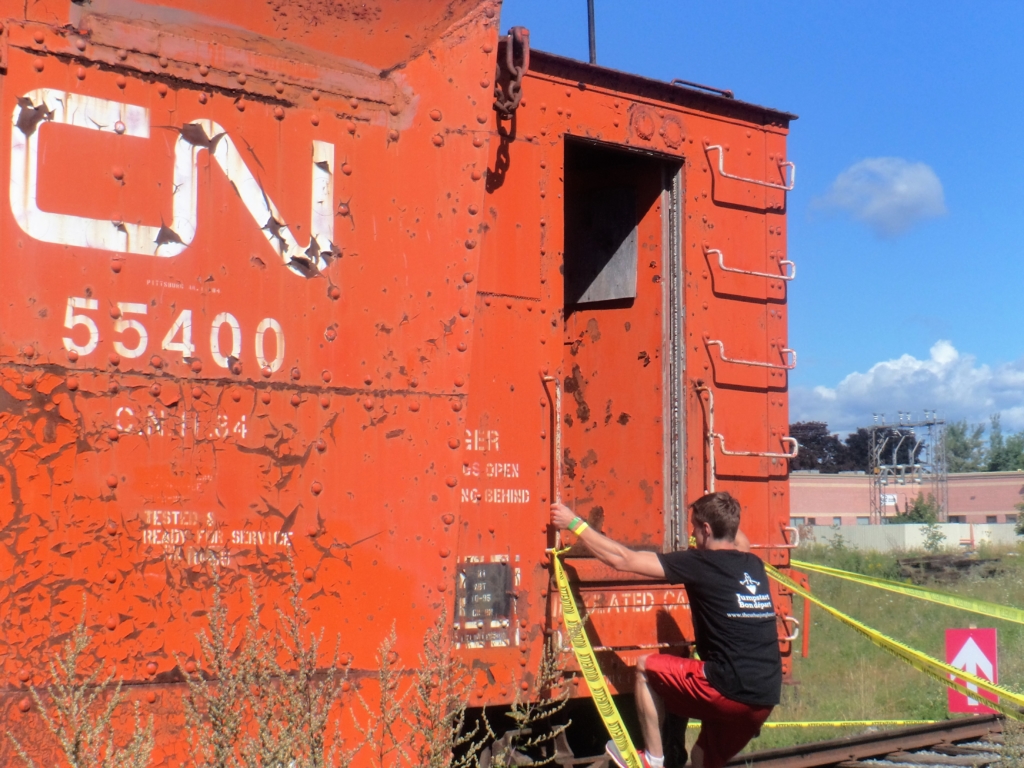 For us cold weather racers this intense heat wave has really curtailed our racing days making us choose specific times of the day for racing to avoid the +100 degree sun.

Our weekend at Urban Jungle Obstacle and Fitness Challenge was no exception with extreme humidex alerts and no cloud coverage to start the day. The race was held at the Smiths Falls Memorial Centre in Smiths Falls, Ontario. This location provided ample free parking and is centrally located with multiple access routes from Kingston and Ottawa.

Communications for this event were good and kept racers informed of race kit pick up and the basic details for race day registration. Registration was quick and easy online and early birds could receive a discounted rate and also there were a few online contests to motivate participants to ‘tag’ and ‘share’ for prizes. 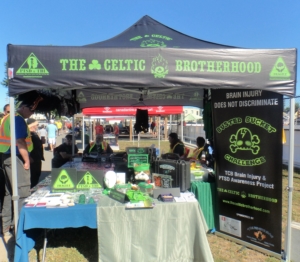 We were already quite familiar with the town layout as it is a central point en route to Ottawa where some of the larger events are held annually. The Memorial Centre offered racers indoor facilities, seating areas and kept participants out of the heat while they waited for their start times.

We arrived about an hour or so before our 10 am heat and avoided much of the lineups for race kit pick up (cotton tee & race bib) and bag check.

There was a small vendor village in the east parking lot and it offered the racers an opportunity to grab a quick snack, purchase some racing gear from OCR Strong (ropes, shoes etc…) and even get a massage from a local healer. Some of the clubs that helped out and were supporting great causes were the Sole Sisters and the Celtic Brotherhood each adding to this event with friendly enthusiasm.

There were two choices for this event either a 5K or 9K route that did an out and back loop through the main part of town.

There was some confusion as to where the start line was and a bit of a delay as the finish line was being set up nearby but heats were released quickly about every 2 minutes in groups of 10. We chose the 5 KM course which challenged racers to a variety of obstacles.

Water stations were available along the course, but it is recommended to wear a camelback on the extreme heat days and cool off at water obstacles, when available if you plan to be out there for an extended period of time.

As we headed over the first obstacle of scattered tires, we enjoyed the creativity of the unknown as we crawled under a partially open door and into the cool arena. Inside, there was a bit of a mix-up as the signage did not direct racers into the main rink and the staff were waving racers off from entering into office areas. Racers then tested their cardio as they wove up and down through the arena stairways and then headed back outside for some climbs, carries, walls that looped through fields and then onto the train tracks that cut through the west end of town. One unique element of this race was the full-size train engines that runners could climb up and into, and oftentimes through, to get a fantastic view of train travel from years gone by. It was truly one of the highlights of the event. As we continued along the west side of town we headed back towards the Railway Museum of Eastern Ontario and enjoyed a quick water break.

Then we were off again, crawling under trains and then headed through the residential neighborhoods towards the Rideau River. I have to admit, this was my favorite part of the whole event when we were asked to jump into the river and follow it a short distance downstream, we took advantage of this great photo opportunity to play in the water and cool down from the extreme temperatures. Along the shore, we ran and up and over some lovely smashed cars and into a great mud crawl being kept wet by more firefighters. We then attacked our next group challenge and flipped the more than 500lb transport tire, successfully saving our green bracelets from removal, before being directed back up through the bustling streets of downtown. 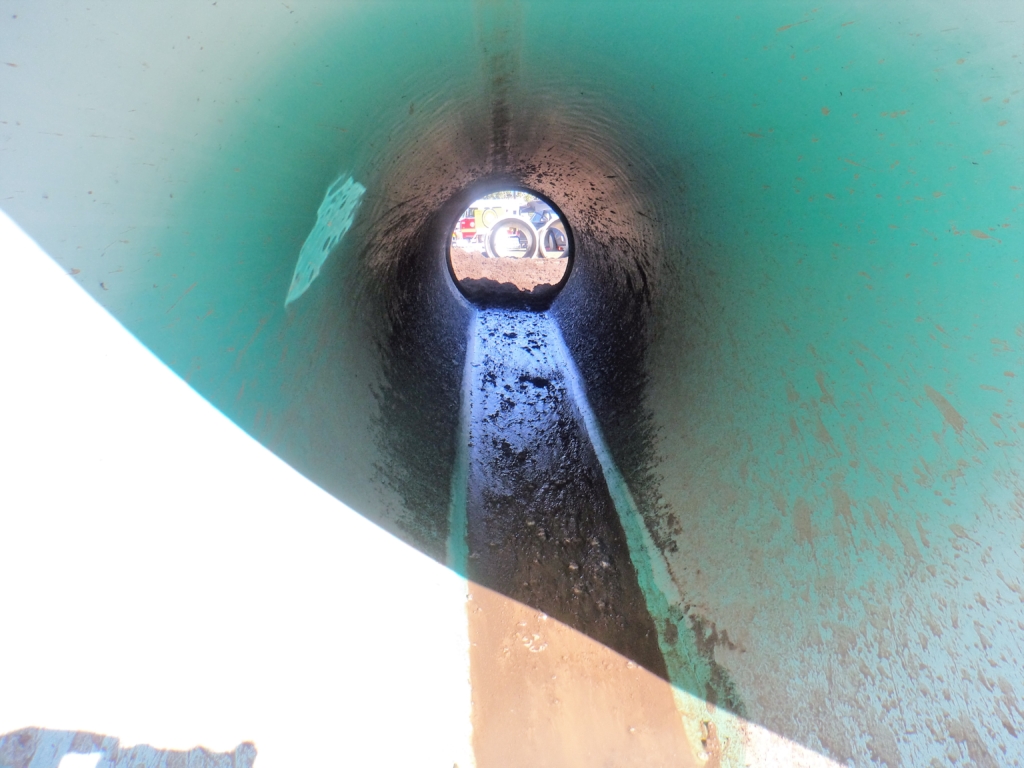 It was a hoot rushing through the streets covered in mud as the church let out nearby, we offered dirty hugs to everyone and giggled with glee as they revered us as some type of ‘crazy ladies’. Some local residents even set up water and snack stands for us to enjoy as we continued along the final few kilometers towards the arena. Some signage was again lacking near the arena but we managed to find our way inside where we found a solo electric guitarist who was excellent, but I felt badly that he was in this huge stadium all by himself and people were missing out on his fantastic abilities. We then hopped onto a modified version of a platinum rig and back outside for the final cargo climb, walls, and mud crawl. (*due to a shortage of volunteers this indoor area had to be closed where fitness challenges had been planned) 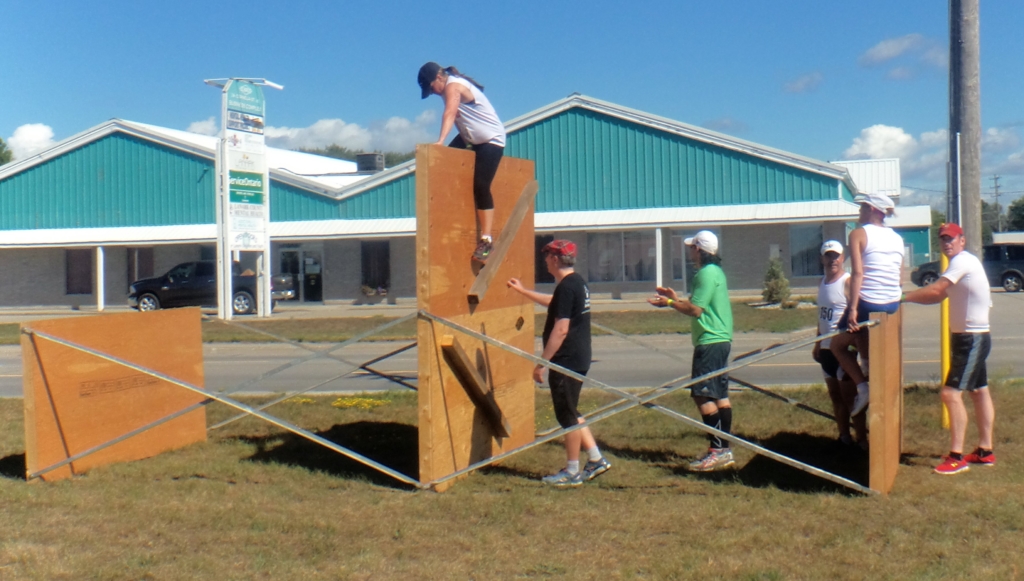 The finish line was back near the start line and volunteers awaited racers with their finisher’s medal and there was a fantastic pumper shower provided by the local fire department. This has to be the best shower we have used at any event EVER! The medal received by all finishers was great. It is definitely one of the heaviest to date!

This is a family-friendly event, with some great children’s activities in the outdoor rink area. Spectators have a great view of the final few obstacles and there is a good finisher’s photo area for those candid Facebook shots.

Thanks to the volunteers that managed to show up (the race director had noted that around 40 volunteers failed to show up for their stations, very disappointing, to say the least) and those who supported us along the route! 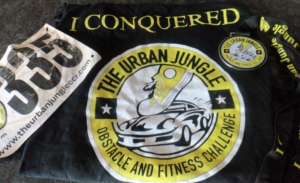 More signage, expand the race kit pick up area for better flow and review some of the obstacles to ensure they are ‘safe’ after multiple heats have passed through. Remove the raffle table from the main entranceway and add port-o-potties near the ½ way point along with an additional water station during extreme heat.

For a first time charitable event, all things considered, it went quite smoothly, there was enough diversity to keep it interesting and it had some challenging obstacles that kept things fresh. It sounds like we missed some of the lower park areas due to volunteers not directing us and this would have added some creative smashed cars and crawls that we can look forward to next year.

Thank you to the events team! And a special shout out to John & Maria, well done!