Last weekend was a weekend packed with mud, obstacles, friends and miles. With some of my team members we did a double race weekend. The second race, Spartan Windsor Beast, will be in a separate recap!

The weekend started with out with the Ram run. Well actually it started out with the OCR Community League warm-up. We traveled to the UK with 6 members of team RAM_nl to do both RAM and Spartan. Since the League finals where planned on Saturday and both the actual Ram run and Spartan Beast on Sunday, we decided to at least join the pre-finals fun run on Saturday at Ram and just see what amount of distance we could cover without risking not being able to run the Spartan on Sunday.

We flew to England, rented two cars and started our journey to the RAM gym in Stoneleigh Park. Took ages to pick up the car, but we were too excited about going to our friends to care. We where sleeping in the gym, with beds provided by our team mates in the UK. We met up with our friends and got to play around on the rigs a bit. Then went off to bed.

Race day was split up in two events. The League Finals day support run (for those not qualified to do the finals) and the OCR Community League Finals. Both a 12km lap on the RAM run course. We started in the second wave of the support run (only two of us qualified for the finals and wanted to do the support run as a warm-up). I needed to run at least 36km to receive my All-season RAM medal and shirt, so I had my mind on slow but steady for three laps.

The first lap was loads of fun, or as I kept hearing around me “All for shits and giggles”. I ran with my Team-RAM flag and just enjoyed myself. It was raining, not cold but nowhere near hot either, but all that didn't matter.

The RAM course is filled with around 60 (I think) yellow hurdles, or as the race director likes to call them “Yellow Perils”. He's right, so no need to tell you where they where at exactly.

The rivers proved to be bearable, though the temperature of the water out of hose on top of the water slide was nippy to say the least. After the slide and crawling up the muddy bank on the other side we made our way to the Commando Ropes and then off to the Fun Garden with lots of nets, logs and the river crossing.

We then swirled back towards the starting area (or RAM village), past the tire carry to what is lovingly called the “Village Hell”. Lots of walls, hurtles, nets, hay-bales and a tire flip. 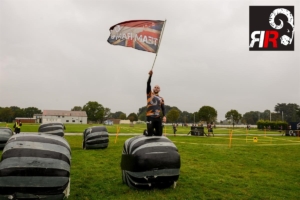 After that we went back out to the 4×4 area with lots of mud, hills and another tire carry. Then off to the Bridge of Hope. We where told the river wasn't high enough, so we climbed down a rope into the water. 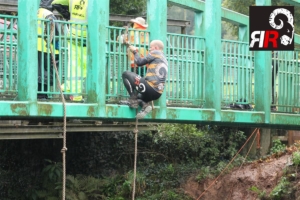 Then back out and into what I guess you could call “the nettle-land”.. Swirling through the nettles and then through the marshes. Into the wider and shallow part of the river Avon. Almost got washed away trying to hold on to the rope and the flag in the crossing, but safely landed on the other side! Then off into the 4×4 area again. After that we ended up back at the RAM village to take on the famous RAM-rig! One of my favorites! The rig is built up out of 6 lanes. 3 easy lanes (crawling under a net, traversing steel pipes, crossing steel pipes and wooden beams and some rings) and 3 hard lanes which we had to do.

First lane we had to hang from steel pipes which where strung up, so could rotate and move around, without the use of our feet and then onto a rope traverse. 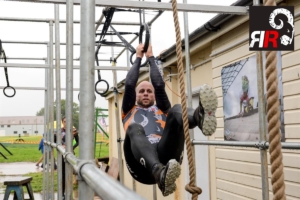 Second lane was a climb onto a cargo net, then down that net and underneath another one to get across. Last lane where rings, then ropes and ended hanging from wooden beams. Even though everything was wet, cold and covered in mud we all made it across, so we could move on to the third segment of the course!
First back into the 4×4, off 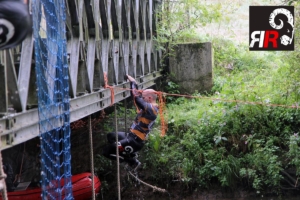 towards the Bridge of Despair, my other favorite obstacle! Part of the course towards the bridge was a swim through the river of a few hundred meters. I decided to take the easy route along the river because of the cold and wanting to do more than one lap. At the bridge we jumped in the river and swam to the only rope with no knots in it.

My first ever RAM run I had to do burpees on top of the bridge because I failed to see the knot on the end of one of the ropes. So now I automatically go for the ropes without knots! I “footlocked” myself up to the bridge, grabbed the beams and completely broke my personal record on how fast I got up the bridge! Grabbed a hand-full of candy and cup of water and off we went. 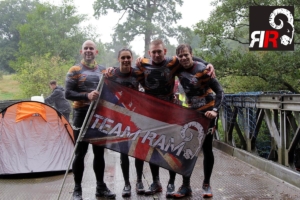 We heard the next part was going to be a tough one. This part of the swamp is never easy. It's basically one long deep trench with usually quite watery and deep mud. This time it was deep, and 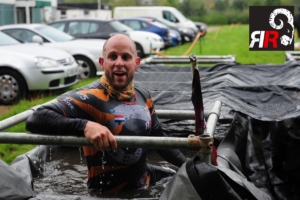 mud, but not watery at all! It felt more like quicksand! We struggled to get through, but we did! We then swirled through the rest of the marshlands and back out towards the RAM village.

We then ran into a new obstacle, at least I never done it before at RAM. We had to carry a large bag across a small course. Then off to the “Watery Grave”, which was cold and dark as one might expect. After this a small stretch towards the finish line of the first round! 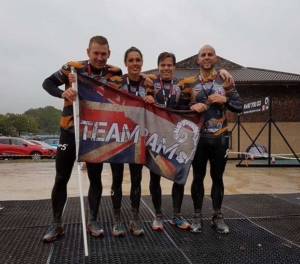 At this point I felt really good. Not tired at all. Not sore and ready for a second lap! After a short brake Franek and myself decided to run the second lap together. We also acted as a sweeper, being the only two running a second lap at that time and able to tell the marshals to head back to the village for a hot drink before the League finals started.

There where only few differences with the first lap. I didn't take the flag this time, was able to jump from the bridge 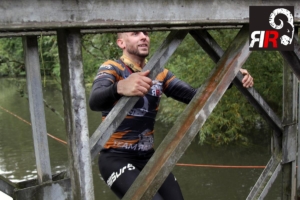 of hope (YAY!) because the water level had risen, and didn't manage to get up on the Bridge of Despair half as quick as the first lap.. Half way in, just before the RAM-rig I all of a sudden started feeling really dizzy. I wasn't tired yet, but couldn't focus and felt all fuzzy. Luckily I ran into my pall Gareth at the rig, providing me with a banana and DELICIOUS brownie! Almost immediately after that I was back on track.
At that point my right knee and ankle started to hurt.

Not too bad, but it was getting harder to ignore. Towards the end of the first lap (especially after the rugged marshlands) it started getting worse. At that point I had a decision to make. I knew I had the Beast the next day which was going to be 20+km. I had done 24 already, so was just one lap shy of my Season medal and shirt, but I knew I would totally run myself into the ground if I where to do another lap. I decided not to risk it. We finished the second lap and received our League medal!

The rest of the day and night we spend with our friends at RAM hq. We had a BBQ and a lot of laughs and after watching part of a movie and taking turns in falling asleep we all went off to bed.

The next day two of our team received their All-season medals and shirts and we got to say goodbye. Then we where off to Windsor for the Spartan Beast!