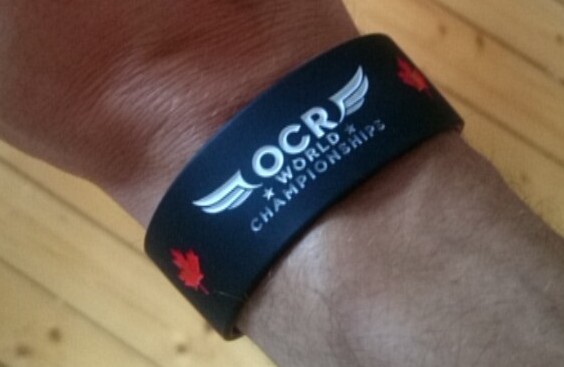 I recently spent a lot of time on airplanes, so I took all the results and data from this year’s Obstacle Course Racing World Championships and calculated all the statistics for pass/fail rates.  I’m going to go out on a limb and state that one of the obstacles this year has created an industry first.  But first, the statistics.  The numbers of competitors including pass/fail information were taken directly from the timing data gathered by Chosen USA, this year’s official timing company.

Now for some interesting data.  Following is a list of every obstacle that recorded a participant failure with the numbers of participants that failed each obstacle. The overall, male and female percentages are calculated from the total number of participants that failed obstacles.  For example, the total number of women that failed the Platinum Rig is 118.  This is 88.72% of the 133 women that failed obstacles for the entire event.  Obstacles with the highest failure rate are first.  In the inaugural OCR World Championships held in 2014, Platinum Rig was new to the industry and proved to be the ‘band-taker’ of the event.

Once again, the Platinum Rig takes the most bands. However, you will see that the numbers of males versus females to fail the obstacle have settled to almost even.  Of the 231 total failures, 113 of them were male, and 118 were female.  The Rig followed by Urban Sky and Samurai, also by Platinum Rig, then Skyline.  The big news of the event and an industry first from the Suspended Walls, provided by The Indian Mud Run.  You will see in the data that, for the first time, women had an advantage over men.  More men failed this obstacle than women.

I reached out to Hubie Cushman, the designer and fabricator of The Suspended Walls and the Race Director of the Indian Mud Run.  Hubie was very excited and shocked to hear the news of the impact his obstacle had at this year’s event.  “It just makes me happy to be able to provide something new and challenging to the industry and the OCR community,” said Cushman.  I asked him if he any ideas as to why women did better on his obstacle than men.  Cushman responded with “I honestly don’t know, but I’m going to put some thought into that.  It wasn’t intentional.  I was trying to design something that was equally challenging to everyone”.

Probably because men are inherently bigger and heavier the failure rate was higher.  With the fact that these traverse walls suspended off the ground creates an entirely different effect caused by gravity.  For the larger and heavier athlete, the more the bottom is likely to push out away causing an athlete's center of gravity further from the board.  I’m very curious as to what others may think and would ask that you comment on this article with your thoughts on this.

Whatever the reason, this is revolutionary in the industry and what OCR needs more of.  The Suspended Walls took an obstacle that most races use in some form on the ground, put a twist on it and created something extraordinary.  Innovation like this is greatly appreciated and much needed.

Below are the individual statistics for the 15k Event.

And next is the chart showing the obstacle statistics for the 15k course.  Once again, all things Platinum Rig continue to take bands.  The obstacle called Platinum Rig 2 was the Rig that was low to the ground.  I know you all remember that one.  Now, instead of working on your grip strength, you need also to work on core, core, core.  Great obstacle by Platinum Rig, with a few modifications that could help increase through-put, I see this obstacle going places.  Additionally, you’ll see the incredible impact the Suspended Walls had on the crowd equally challenging to both men and women.  Maybe after Friday, some of the guys figured out what to do on this one. 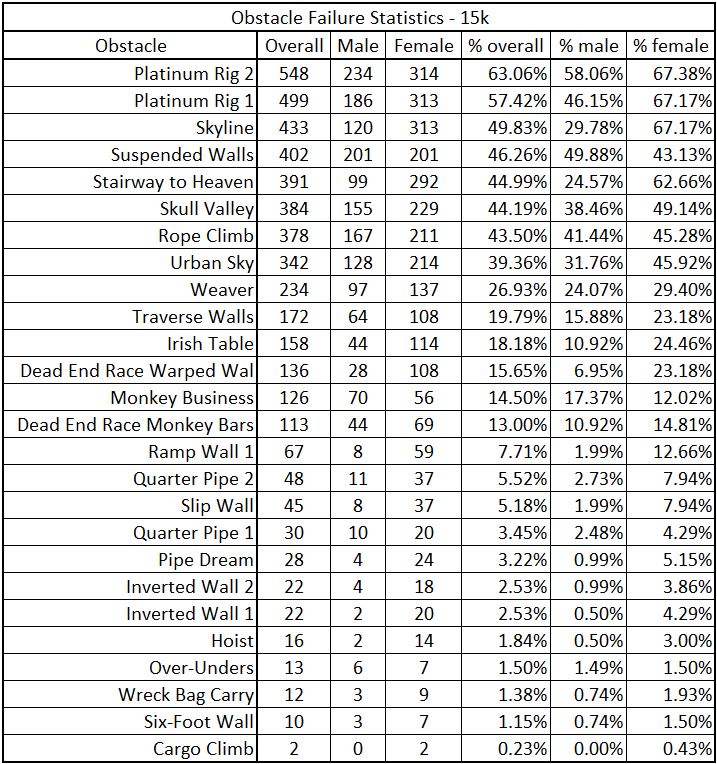 Overall, there has been a trend since the inaugural OCRWC event in 2014 that shows a higher pass rate each year.  Have the obstacles gotten easier? Or more likely, Does this show progressive improvement in the athletes?  The one trend that is beyond dispute is the total number of participants each year continues to rise.  This is perfect for both the industry and the community.

0shares
Disclaimer: The viewpoints expressed by the authors do not necessarily reflect the opinions, viewpoints and official policies of Mud Run Guide LLC, or their staff. The comments posted on this Website are solely the opinions of the posters.
By Kevin Jones|2016-12-09T10:01:57-05:00December 9th, 2016|Op-Ed|12 Comments

About the Author: Kevin Jones

Kevin is an OCR enthusiast and advocate for the masses. When not working or training, he's trying to figure out ways to expand the Obstacle Course Racing industry.