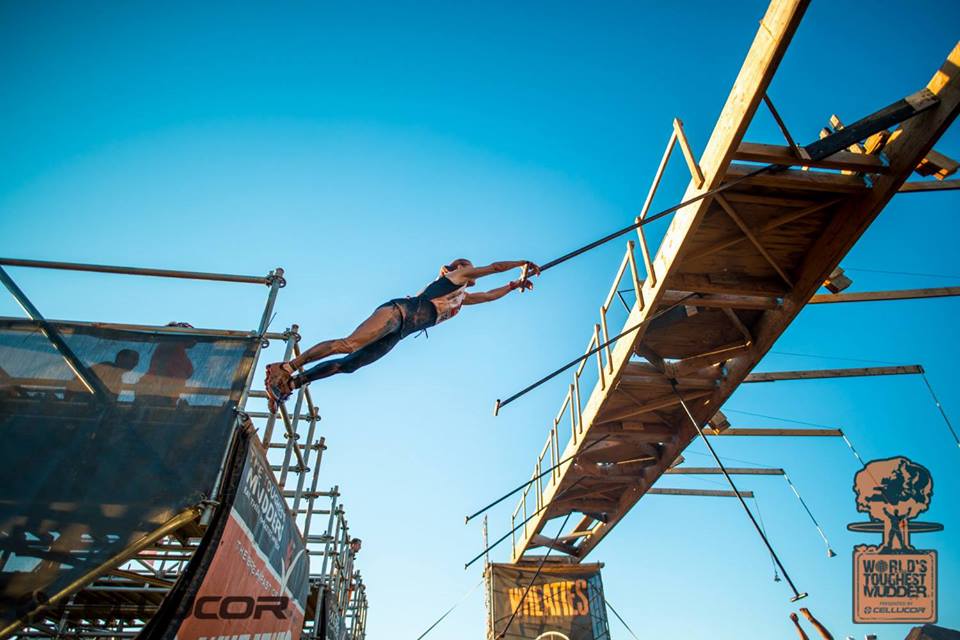 Last year I compared World’s Toughest Mudder (WTM) 2014 with 2015.  Since another year has passed in the same location, new athletes to the WTM course probably want to know how this year compared to the last two years in Vegas.  Here is a quick rundown by topic with my two cents thrown into the mix.

Not a big difference in terrain between the three years since all of them were run over the same ground.  2015’s course more closely resembled 2016’s course since it had the same start line with the short uphill.  2014’s course started in a different direction heading up the largest hill first.  Elevation gain per lap for the three years is as follows:

I think this is the biggest factor effecting performance.  2014 had the epic sandstorm (the wind gusts up to 30mph) and what I would describe as “cold” weather with temperatures in the mid-40s.  2015 had little wind and but lower temperatures reaching down to 42 degrees.  2016’s temperature bottomed out at 55 degrees, and it reached that temperature slowly.  This meant that you could run longer (which equates to farther and faster) without a wetsuit.

Personally, I ended up running the first 11 hours without a wetsuit (I put on my Neptune Performance shirt around 6 pm and neoprene top around 8 pm).  However, making the wrong clothing choices will make you cold, almost regardless of the ambient temperature.  Verdict:  2016 had the “nicest” weather, then 2015 and 2014 comes in last with the worst weather due to the sandstorm.

2014 was the only year where mid-race I was wondering if they were going to stop the race because the weather was so bad (reference windstorm video).  In 2014 it also took me three days before I could control my body temperature normally post-WTM, compare that to 2015 which took one day and 2016 which only took a couple of hours. (Slight variations in temperature may be different based on the source you pulled them from, I used Weather Underground…but this gives you an idea.)

As always Tough Mudder kills it on obstacle innovation by leading the industry.  Here are some of the variations by year: 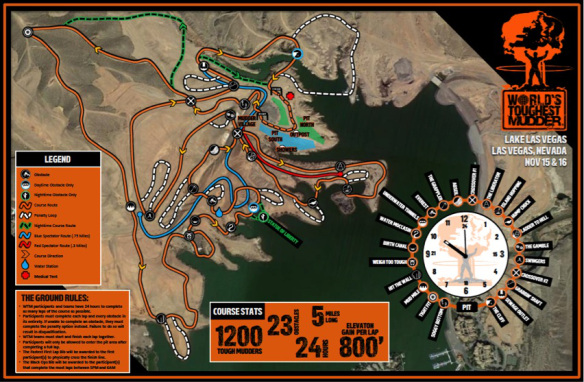 The more penalty obstacles imply harder obstacles because it is impossible to fail things like a law crawl.  This makes 2016 the hardest based on an initial look at the types of obstacles. 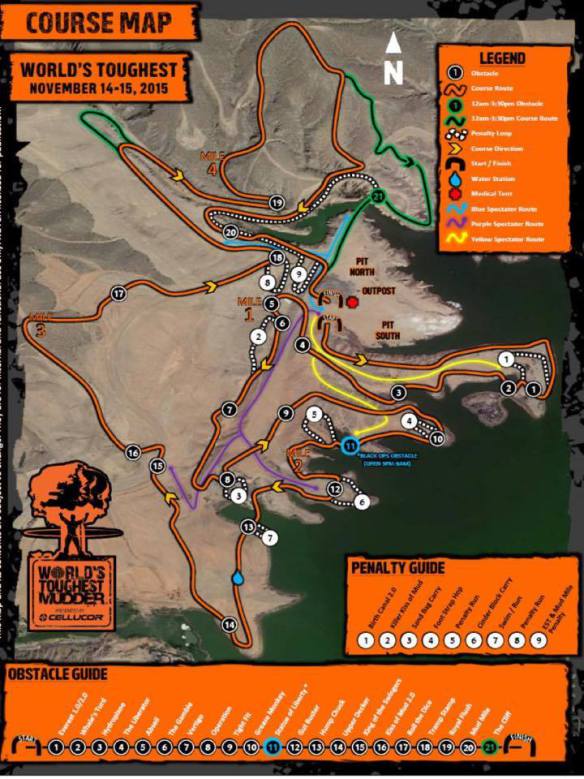 2014 had The Cliff only open during daylight hours.  2015 and 2016 The Cliff opened at midnight.  Personally, I like the midnight opening because hitting the water from 35 ft. Wearing a wetsuit is much more pleasant than hitting the water with bare skin exposed.  However, depending on your fears (darkness, exhaustion, heights, unknown) could make one or the other harder.  Verdict: Toss up.

In 2014, electricity obstacle was a simple roll of the dice to determine if you were going through Electro-Shock Therapy. In 2015 and 2016, it was Operation (using a pole to retrieve a ring) similar to the game Operation. Verdict: 2015 and 2016 electricity obstacle took longer, eating up time needed to attain mileage but I thought was mentally easier because you controlled if you got electrocuted it wasn’t just a game of chance.

Obstacles with No Change:

Hump Chuck was the same, although the swim was significantly shorter in 2016. The Ladder to Hell (aka Giant’s Ladder) was the same although placed in a different location.  Abseil was the same (although the knots in 2016 negatively affect my super-fast descending technique I teach in Strength & Speed’s Guide to Elite OCR).  Liberator was harder in 2016, with only one set of vertical holes versus the double set of holes in 2014 and 2015.  However, the addition of the board at the bottom late in the night made it easier so I would view them as the same level of difficulty. Statue of Liberty was the same, although 2016 had longer torches which were easier I don’t recall seeing people fail that one in 2014 or 2015 so it seems like a moot point.

2014 and 2015 had King of Swingers, which ended in your plummeting into the water.  2015 had the opportunity to earn a golden carabineer, which lets you skip an obstacle. Double Rainbow, while more physically demanding, meant if you completed it you didn’t get wet and it took less time (swimming vs. swinging/walking).  Verdict:  Personally I found 2016 the easiest/quickest but if you were good/tall enough to hit the bell in 2015 that could have saved you valuable time on each lap skipping an obstacle.

2014 and 2015 had Tight Fit (loose cargo net over tractor tires), and 2016 had Giant Wedgie (A frame cargo net with cargo net over it).  Both took a while, and I personally disliked 2014's Tight Fit the most.  Verdict:  2016 was harder based on it taking more time and more strength to climb a giant A-frame than it was to crawl under a net with tires.

2014 had Funky Monkey 2.0 as the highlight of their upper body obstacles, which involved monkey bars were then swinging to a pipe traverse.  2015 was slightly easier with monkey bars to a downhill pipe.  2016 was by far the hardest of the three years if upper body is your weak point by including Funky Monkey 2.0, Stage 5 Clinger and Kong (rings for 1/3 of the event and pipe traverse for the other 2/3).  Verdict: 2016 had the hardest upper body obstacles, but if you were good at them it allowed for a clean and fast flow of the course.

2014 had two obstacles (Crossover) that were just crawling through a pipe. There was nothing like this in 2015 or 2016. The majority of the obstacles required some degree of strength. The Gut Buster was present only in 2015, which personally I thought was one of their hardest obstacles (especially for short people).  Verdict: more difficult obstacles in 2015 and 2016.

I don’t recall the exact temperature of any of the years of WTM.  However, based off memory (which is notoriously unreliable), I felt 2015 had the coldest water and 2014 was the warmest with 2016 in the middle.  Either way, I don’t think the temperature of the water effected performance that much.  What did effect people hitting mileage goals was quantity and placement of water.  2015 had a lot of water that was spread out throughout the course.  This meant consistently dunking in cold water (followed by peeing my pants) and slower movement (I run faster than I swim).   Verdict: 2014 was hardest because high winds compounded the effect of being wet and 2016 was easiest due to less swimming and not as frequent wet obstacles.

The X factor is anything other variables not captured in the above topics. First is variations in start times, 2014 had a 10 am, 2015 had a 2 pm and 2016 had a noon start time.  The more time you spend in daylight, the easier, it will be due to a lack of wetsuit, less clothing and the ability to see without relying on a headlamp.  This, makes the earlier start times “easier.”  A noon or earlier start time I also think is mentally easier.  In 2015 when the sun came up there was still 8 hours left as compared to 4 hrs (2014) or 6 hrs (2016).  This meant a lot of racing was still left despite a rising sun which could be mentally draining.   Second is fear of the unknown.  2014 presented a course/terrain no one had ever seen before leveling the field.  By 2016, I could run around and identify locations of old obstacles based on previous memories.  Third is YOU or more specifically your strengths and weaknesses.  For some harder obstacles might play to a strength and for others weakness.  For some bad weather plays to strengths because they will won't quit regardless of the temperatures.  Verdict: For me, I did not like the new X Factors of 2015, but the X factor of YOU determines what was easiest/hardest.

Two person teams was a huge factor in the team competition resulting in record-breaking mileage for multiple teams.  It is much easier to find one other person that has similar athletic attributes than three others for a team.  Two people will run a more similar pace and have more similar fueling, clothing change and pit stop needs than a team of four.  It is no surprise then that records were smashed this year in the team competition.  After all when you put the two best OCR athletes in the world together (not even a question….someone try and argue that), it is no surprise they walked away $100k richer.  Personally, I think

Personally, I think two-man teams are too small, to me, that is more of a couples competition (Jon and Ryan you are a great couple….sorry Henriette and Lindsay, there is a new power couple in OCR world).  While it was fun to see the 100k go out the door, as I said to Ryan on lap 13 “You guys are going to f*#$ing crush 100 miles and it's going to be awesome!”, I would like to see a return to 4 person teams (or at least compromise with three-person teams). Verdict:  Easiest for teams in 2016.

So which year was the hardest and which was the easiest?  As always it depends on your strengths and weaknesses.  2014 was the hardest due to weather (windstorm plus colder temperatures), I think 2016 was the hardest for difficult of upper body obstacles, 2014 also had a large fear of the unknown for everyone because of the new location.  While record mileages were achieved in 2016, it would seem to indicate that was the easiest.  However, I wouldn’t call this (or any other 24-hour race) easy; it is more like 2016’s WTM allowed for faster laps if you were obstacle proficient with a strong upper body.  There was very little crawling and very little swimming in 2016, which meant faster loops (since both of those slow you down significantly).  Most of the obstacles could be completed individually for those that were very physically fit.  Furthermore, the course was exactly 5 miles, which according to many people's GPS in 2015 it was a little over five.  All of this combined with the nicer weather, earlier start time and constantly improving fitness levels of all athletes meant higher mileages.

1shares
Disclaimer: The viewpoints expressed by the authors do not necessarily reflect the opinions, viewpoints and official policies of Mud Run Guide LLC, or their staff. The comments posted on this Website are solely the opinions of the posters.
By Evan Perperis|2016-12-08T11:42:38-05:00December 9th, 2016|Op-Ed|0 Comments