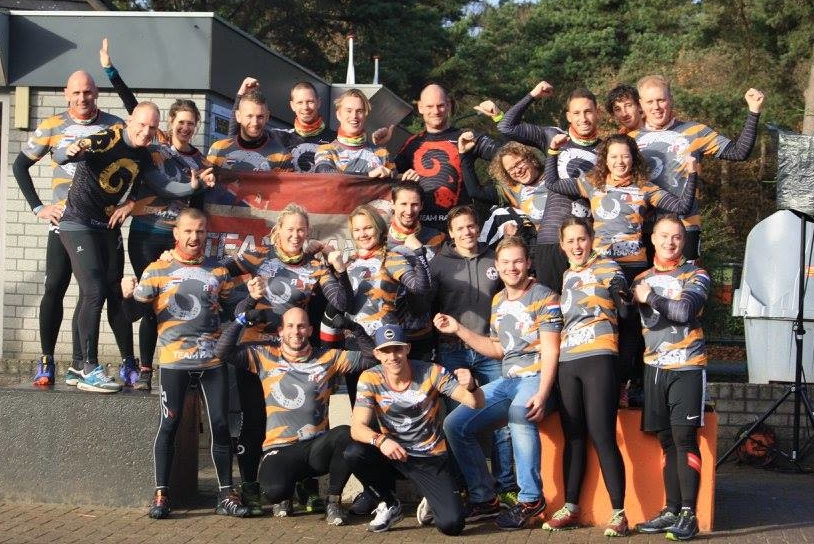 Last weekend marked the last OCR of 2016 and the first run where almost all Dutch team RAM members showed up! We enlisted as a team to run the 13km OCR from origin Survival Run. The original Dutch Survival sport shows some similarities with OCR. The main difference is the immense complexity of the obstacles, with extremely long rigs, lots of ropes and demanding massive upper body strength and technique. Imagine the toughest way to conquer an obstacle and that's what is required for a Survivalist to do. With the focus on the obstacles instead of the running, the distances are usually not that far, and obstacles all stacked together to form huge rigs. Some of these technical rigs showed up on the 2016 OCR European Championships, which had to be downgraded to suit the OCR runners.
As for the Hang-on run, they decided to add an OCR variant to the run. A somewhat separate division, with fewer requirements on the obstacles and some more water/mud to conquer.

Since we were with a whopping total of 21 team members, we got placed in the last wave of the day. A quarter past two we would get going. A quick calculation on our part showed we had a tough task of sticking together and making it before dark. The course was going to be shut down on sundown, which was five o’clock. None the less we were excited to get going! We quickly made a group photo and entered the starting area. After a quick countdown, we stormed over the starting line. 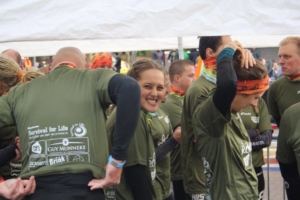 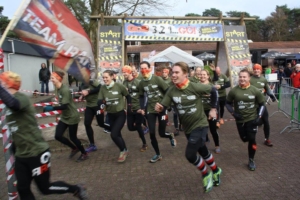 After about 2 kilometers the first combination obstacles showed up. Ranging from a lot of different types of rope climbs, including the dreaded UFOs. 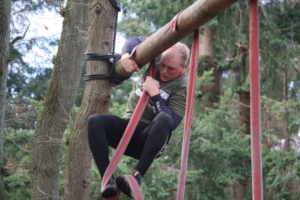 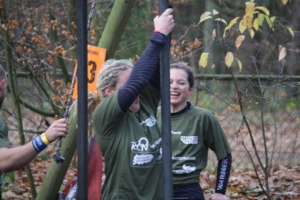 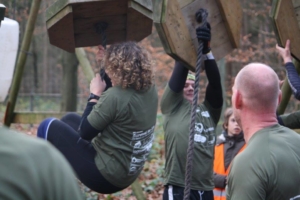 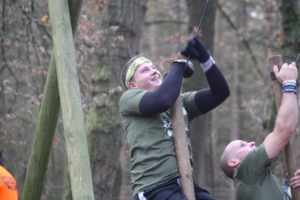 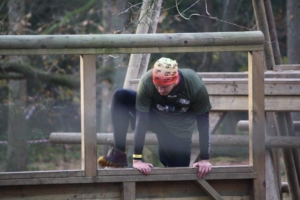 We then ran off into the woods to head to the second combination of obstacles. Starting with a pegboard. We didn’t have to do the pegboard since we weren’t in the Survival division, but that didn’t stop us from doing them anyways! Then followed by pegs and rings and the famous Dutch Wooden Shoes! We all swung ourselves along the pegs and wooden shoes and continued to another set of rope climbs, walls and the upper body monster the Destroyer! 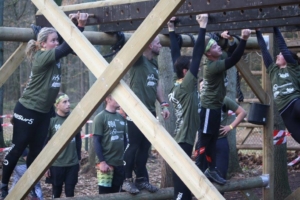 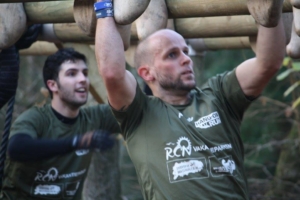 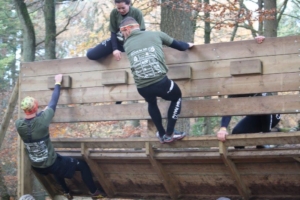 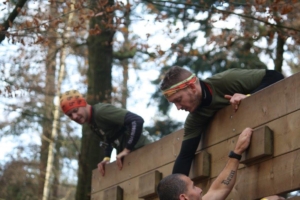 After another short run we got told to skip a huge part of the mega combos, so we went straight to the giant Weaver. This turned out to be a tough one since the beams were further apart than on most other runs. After a quick drink and slice of orange, we headed into the huge fields surrounding the course.

We ran into the rope steps to monkey bars. Same as at the euro champs, stepping from rope loop to rope loop and then up to the monkey bars. Then a little further on another euro champs beast. We were told to walk over the horizontally placed beams, then up and down the cargo nets and over the beams on the other side. Some of us decided to do them the Euro Champs way, beams traversing underneath!
Finishing the field with again a Euro Champs obstacle, the Wall Rope Jump. Climbing over a wall onto a ledge, then jumping towards a rope and that was it for us. Well, some of us, since we decided to do a flip over the beam!

Back into the woods, we encountered a net climb (hanging at around a meter and a half from the ground) and yet again a familiar obstacle, the Twigs. Climbing from pole to pole. Then a short log drag. We got overtaken by somebody from the organization. The sweeper! He was supposed to clear the course to ensure nobody would be on at sundown. It wasn’t sundown yet! He told us to go straight ahead at the log drag, instead of running around the lake. Which meant we missed a big combo rig on the other side of the lake.
We then had to run op a huge set of stairs and were off towards the fields again, with a long rig with rings and a rig with rope loops to step through. We then ran back towards the large combinations of obstacles. Starting out with a rig with triangles and then a long Gunnor’s Struggle. Which is moving along two beams, hanging from a stick placed on top of the beams with both ends. We were told to do only that part of the rig, not the following flying monkey bars. Sure, we’ll skip those. NOT! 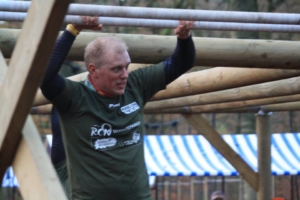 We then swirled back into the woods and after a few kilometers ended up at another large combination of obstacles, with lots of net climbs and even shooting arrows! We got told to skip the monkey bars and water crossing since it was getting near sundown. So we quickly made our way across the rest of the obstacles, to make sure we didn’t get pulled out just before the finish. The course got cut short quite a lot, but there was nothing we could do about it. We ran off towards the last section of the course, with a few hundred meters left. Towards the final obstacle. Climbing from rope to rope over water and then over a net. We made it just after sundown. All of us! 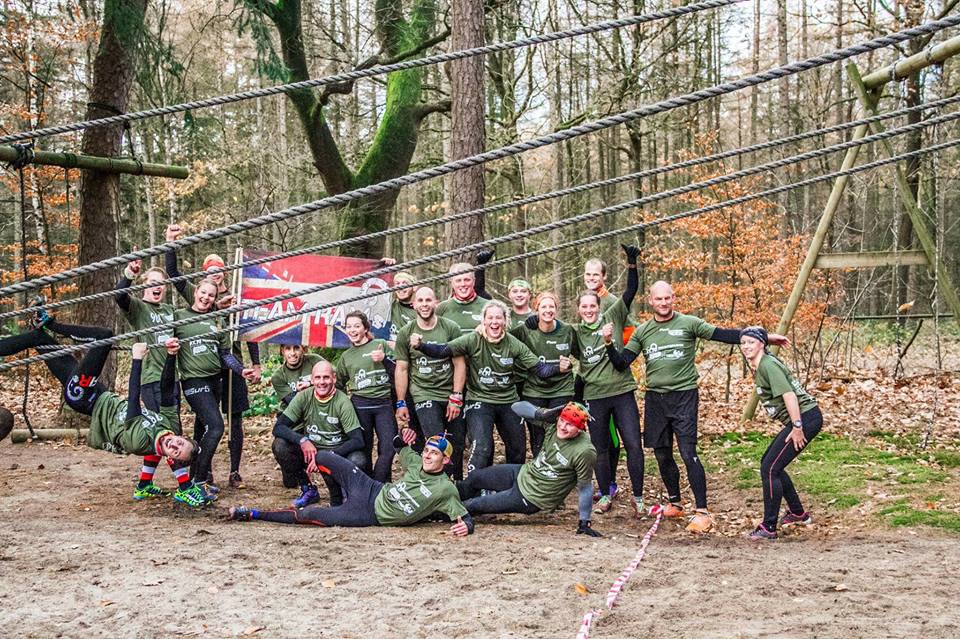 I ended up being slightly agitated about the course being cut short, missing some awesome obstacles but understood why they had to do so. Most of all I was so damn proud of my team. My teammates were smashing new obstacles, conquering their fears, motivating and helping each other, sticking together! All crossing that finish line together! 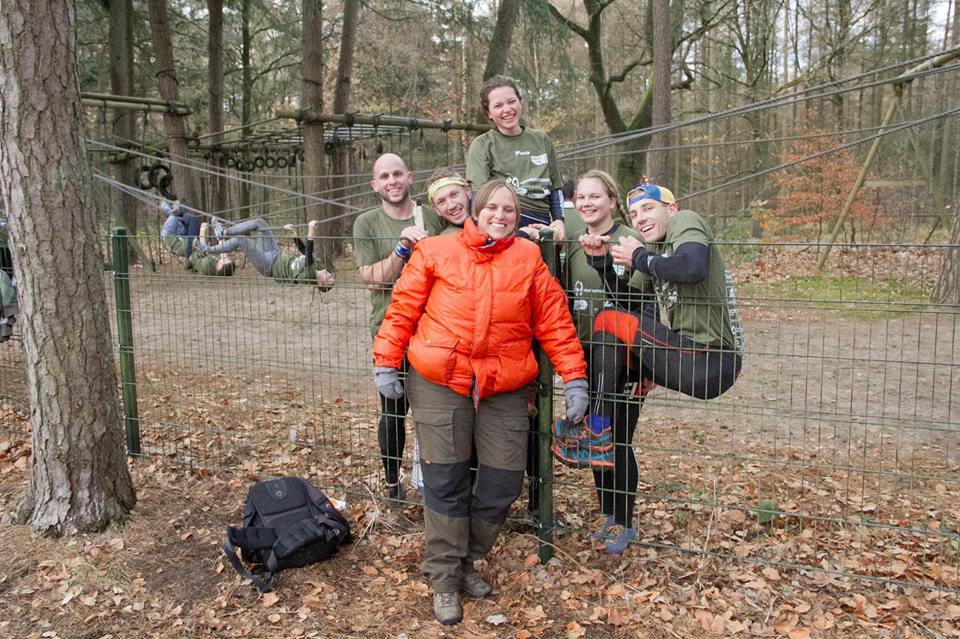