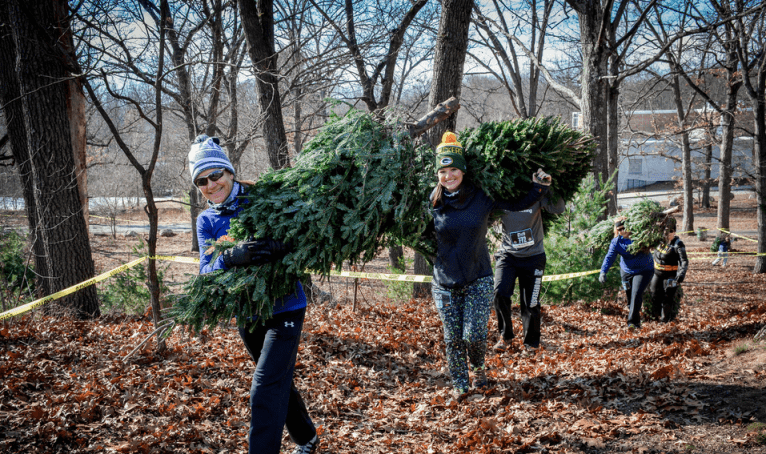 The annual Blizzard Blast race has quickly become the unofficial start to the new OCR season in the New England area. Now in its fifth year, the winter-themed race, created by the local Smith Fest entertainment company, has consistently been highly regarded with fun and challenging obstacles. After spending the last couple years at a local golf course, they decided to move the race back to its original location at the Shedd Park and Fort Hill area of Lowell, MA.  Parking was a quick shuttle ride from the satellite lot to the venue. There was also a shuttle that took each wave to the starting line a few minutes away. This type of coordination could have easily become a logistical nightmare, but the buses were plentiful and kept people moving all day – a testament to the people in charge smoothly. While the actual race venue was the same as previous years, the registration location and after-party was at a local bowling alley which seemed an interesting choice. SmithFest always does an excellent job in making all of their events as spectator and family friendly as possible. 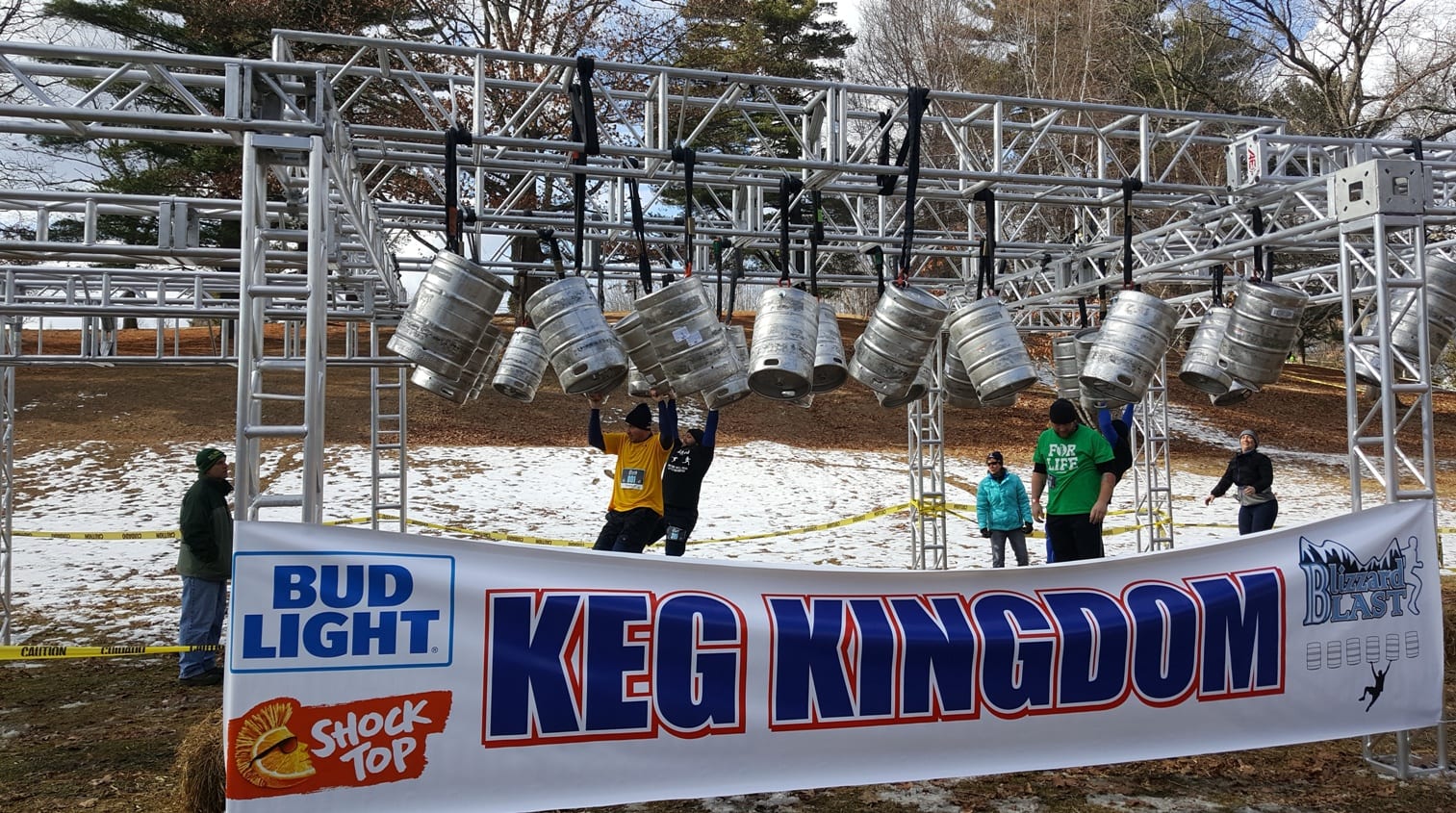 With the constantly changing New England weather, it’s tough to know what to expect race day, but the Blizzard Blast folks come prepared for any condition and have become adept at changing course at a moment’s notice. Without much-remaining snow in the area, they did a great job incorporating what they could. Snow banks marked the start and finish lines, and they were even able to find a small snowy hill to include the fan favorite sledding obstacle. However, the plastic saucer-style sleds ensured you felt every bump on the way down. 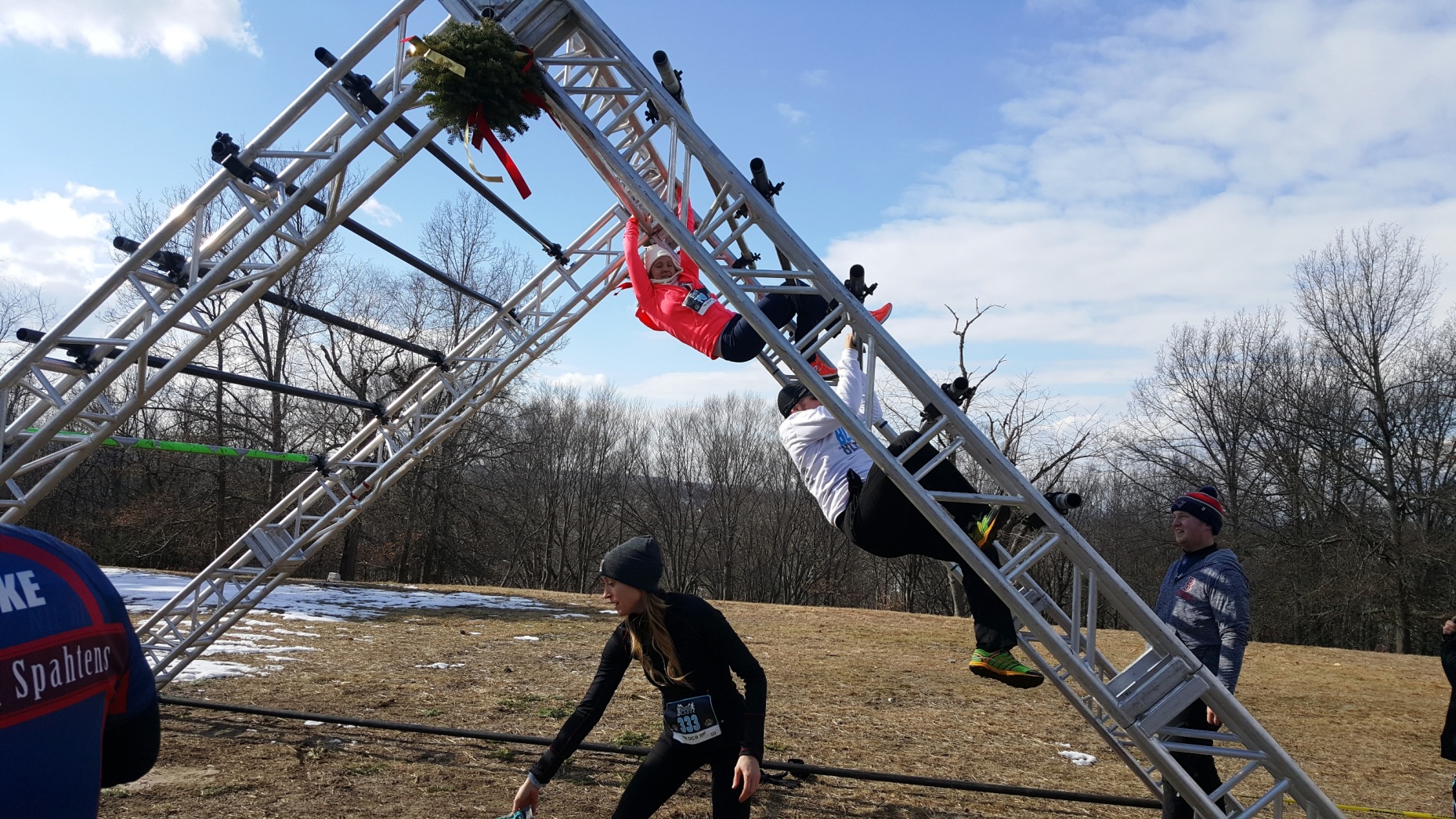 The terrain varied from street to trail running with a few rolling hills. The course weaved along rock walls and through playgrounds and sports fields. Blizzard Blast always does a great job incorporating their surrounding into the course.  Obstacles were well-spaced, and I didn’t notice any bottlenecks throughout the day.  The 20+ obstacles included your typical fare (O-U-T walls, traverse wall, tire drill, rope climb) in addition to some new and returning winter-inspired ones along with the Blizzard Blast originals.  They must have collected every old Christmas tree in Lowell with no less than three tree-inspired obstacles including a tree slalom, the tree carries, and a surprisingly tough tree drag up and down a small incline. The signature obstacle at Blizzard Blast and one of the most original I’ve ever seen in OCR are known as the Keg Kingdom rig. Instead of standard monkey bars or rings, SmithFest's unique twist was the use of empty beer kegs! 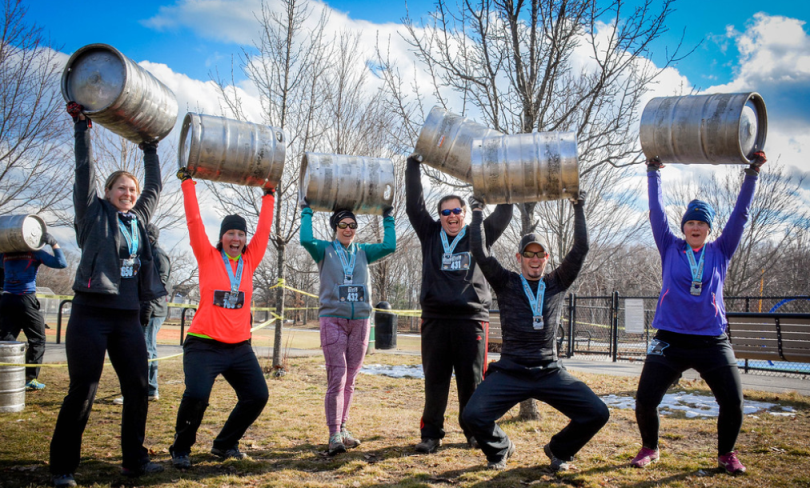 The kegs were suspended by one side to a giant metal structure. Trying to grasp metal kegs with cold hands makes an already difficult obstacle even harder! The kegs were also a recurring theme throughout the course with two different keg carries. The first one involved carrying the keg around a loop and then transitioning to a challenging Donkey Kong-style barrel roll uphill the rest of the way. The second keg carries weaved through a kid’s playground, over a snow bank, and across the finish line. The mini-keg wrist roll returned this year, and the slick rope at the double keg herc hoist increased the difficulty. Another challenging new obstacle was the Devil’s Staircase: a large A-frame transition ladder. The rungs were spaced out enough that you had to stretch to complete it properly.  Other returning obstacles encountered were the paintball shoot (awesome!), football toss and dreaded peg board climb. The added dimension of cold weather, snow, and ice makes for some unique safety concerns. SmithFest always does a great job in ensuring that everyone is safe on the course. The obstacles were well constructed, and most of them were manned by helpful volunteers. 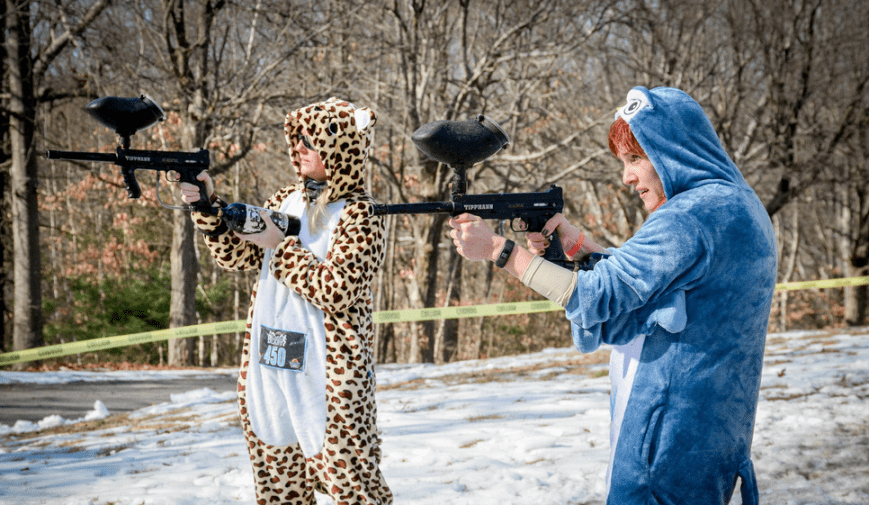 While Blizzard Blast is mainly considered a fun event, the competitive nature of the race was increased when it was announced that this year’s race had become an OCR World Championship qualifier. The top 5 in each gender for both the open and elite heats, along with mandatory obstacle completion (not an easy feat), punched their ticket to the year-end event. 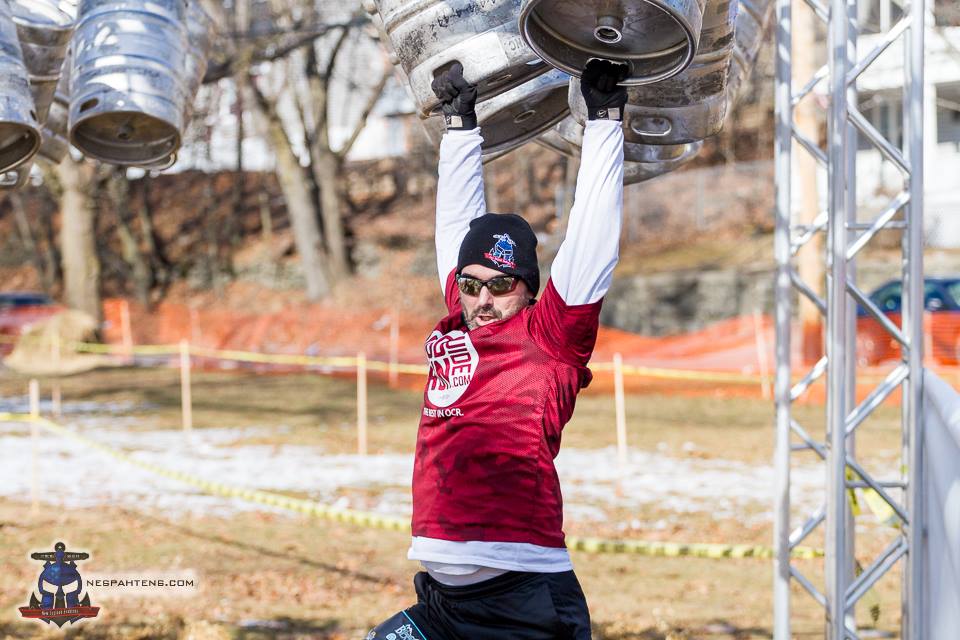 Swag included an awesome medal/bottle opener, long sleeve shirt, and Blizzard Blast buff. Multi-lappers also earned a cool Blizzard Blast flask. The after-party was held back at the bowling alley, and all runners were given a free cup of soup, chowder or chili to help warm them up. The venue was a perfect location for the family friendly event. The kids were kept entertained with bowling, indoor golf, bocci and a huge arcade. There was also a DJ in the bar and restaurant area entertaining the crowd. 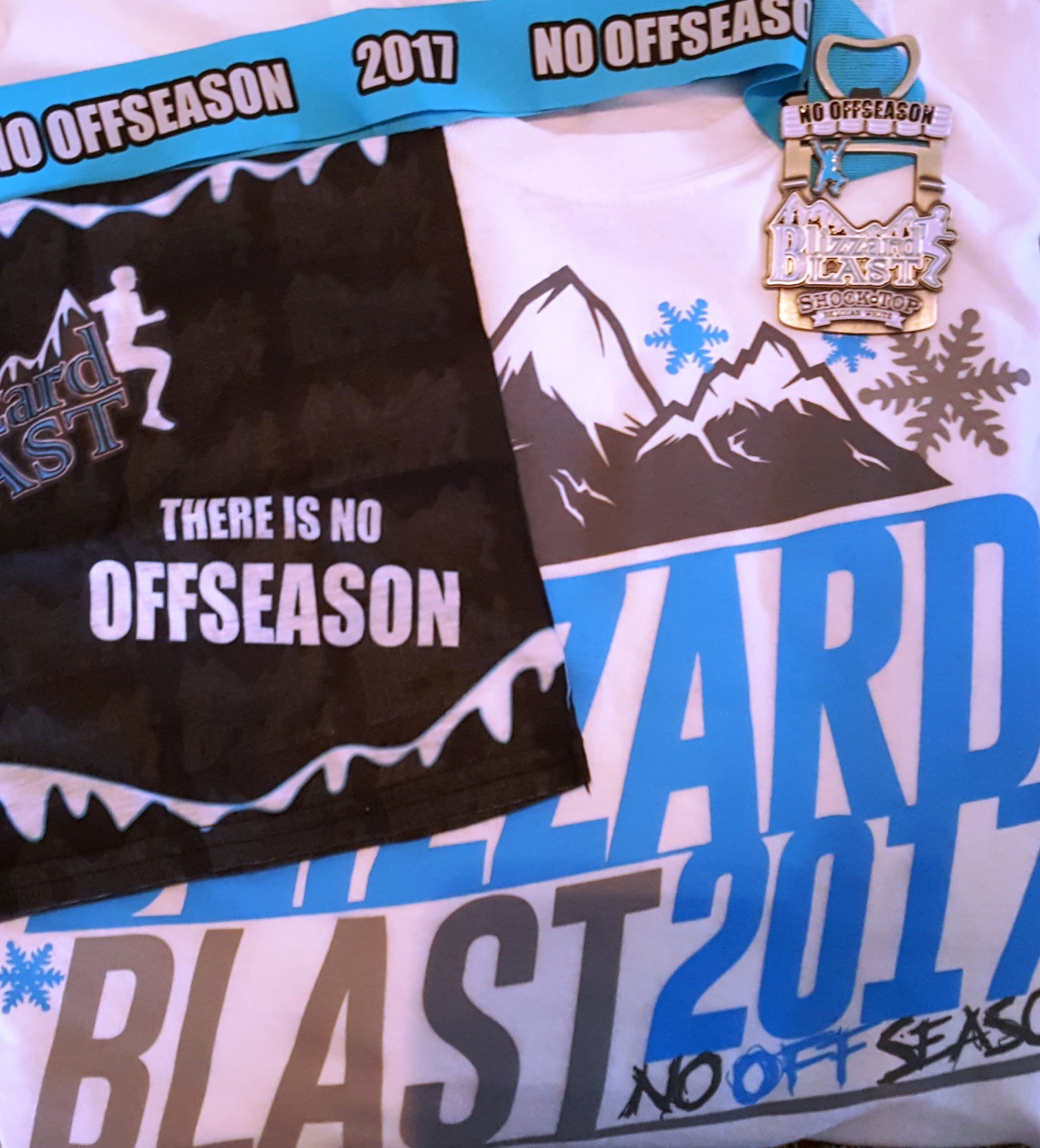 With the unpredictability of New England weather, the logistics of trying to coordinate an obstacle course race in January could easily become a nightmare, but SmithFest Events continues to impress with how smoothly they adapt to any situation. They always exceed expectations and prove that a winter event can be done successfully. This year’s race incorporated many new obstacles, and they continue to innovate. It seems like other companies are finally realizing the potential and unique opportunity that a winter OCR offers. Blizzard Blast strikes a perfect balance of being challenging yet achievable for both the weekend warrior and the elites. Great start to the 2017 season!! #nooffseason #racelocal