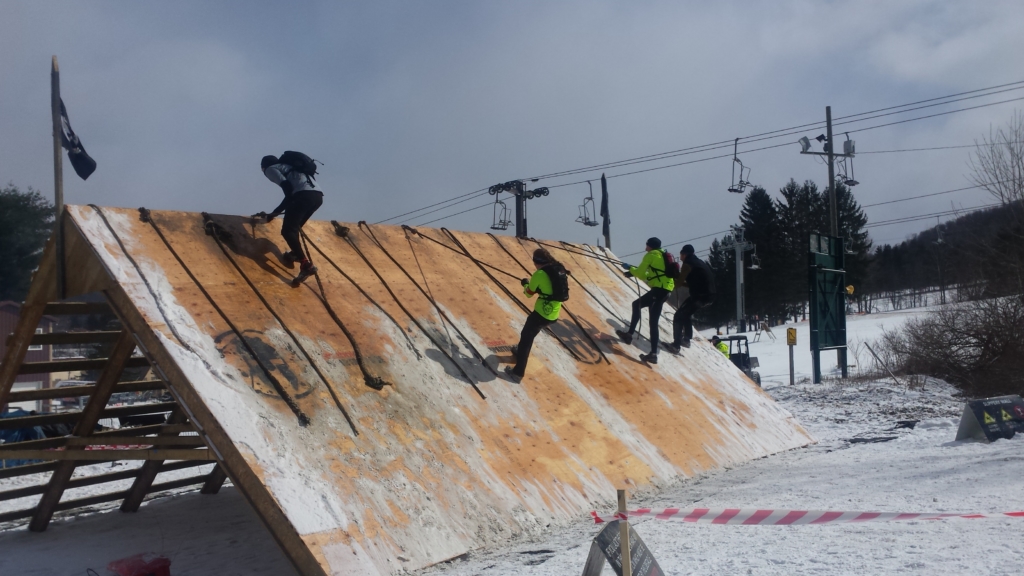 Spartan Race held its first Winter race in the United States this past Saturday.  Greek Peak, located in upstate New York, hosted the event while also leaving most of its mountain open for skiers and snowboarders.  After a week of temperatures in the upper 50’s, arctic air moved in on Friday to create a frigid setup for a 3.7-mile Sprint Race.  More than 3500 Spartans braved the conditions for the race.

The morning began with a last-minute change for registration which led to massive headache that lasted through the day.  Registration was originally meant to take place outside.  It must have been decided at the very last second Saturday morning to move the registration process indoors due to the sub-zero wind chills.  When I arrived for my 9:45 launch time, there was already a long line out of the ballroom, down stairs and along the road.  It probably took me a solid 30 minutes to get my bib to only find out that all races had been postponed 30 minutes for the entire day.  You could see some frustration start taking its toll on some before anyone began their polar plunge. 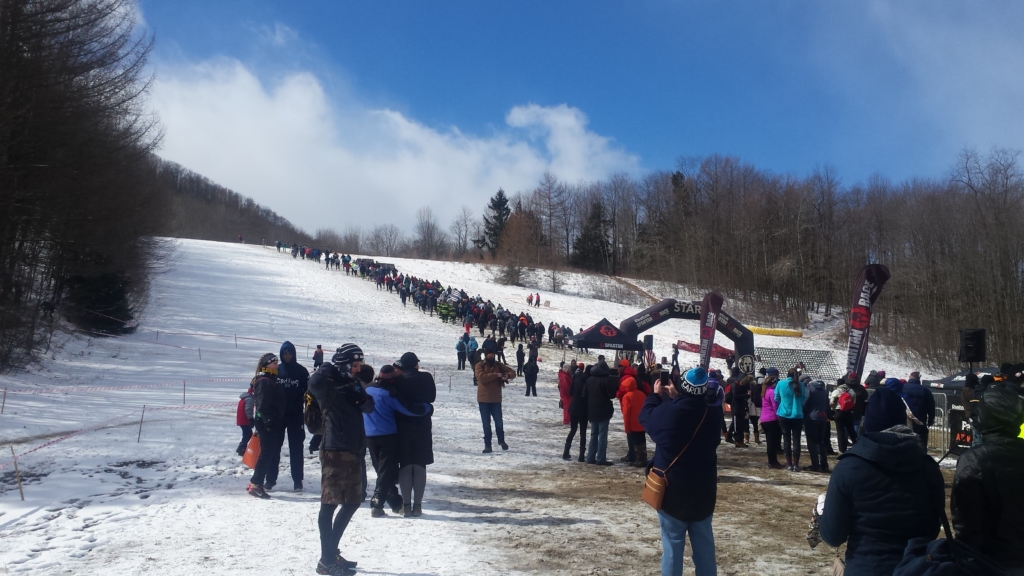 The Sprint began at the base of the ski resort.

The first real obstacle of the day would prove to be one of, if not the most challenging of the day; waiting to launch.  With morning temperatures in the single digits and wind chills several degrees below zero, standing around and waiting to get started was an enormous task.  The toes and fingers, no matter how insulated they were seemed to be the parts of the body most people were concerned with.  Once the race began, the steepest and longest ascent of the day got the needed blood pumping.  This climb was a mixture of snow and ice cover in the morning hours.  It was reported that in the afternoon, most of these uphill and downhill climbs were no longer on snow but instead more of a frozen mud.  Many of the Spartan trademark obstacles were on the course in their true form.  The A-frame, Spearman, Bucket Brigade, Fire Jump and Multi Rig were just a handful of the obstacles that made the course.

Many Spartans struggled with the obstacles requiring good grips, such as the Rope Climb, Multi Rig and the Hercules Hoist.  As most OCR races go, one of the biggest questions of the day was to glove or not to glove.  I chose to wear a pair of Neoprene 3mm gloves with great grips and I found success on these obstacles.  The bucket brigade spared Spartans the job of carrying their bucket of stone up any parts of the mountain, (most likely due to safety concerns with all of the ice) but it did seem like a longer distance to carry than Spartans in the past.  The new twists on obstacles that Spartan seemed to promise didn’t pan out to a whole lot. 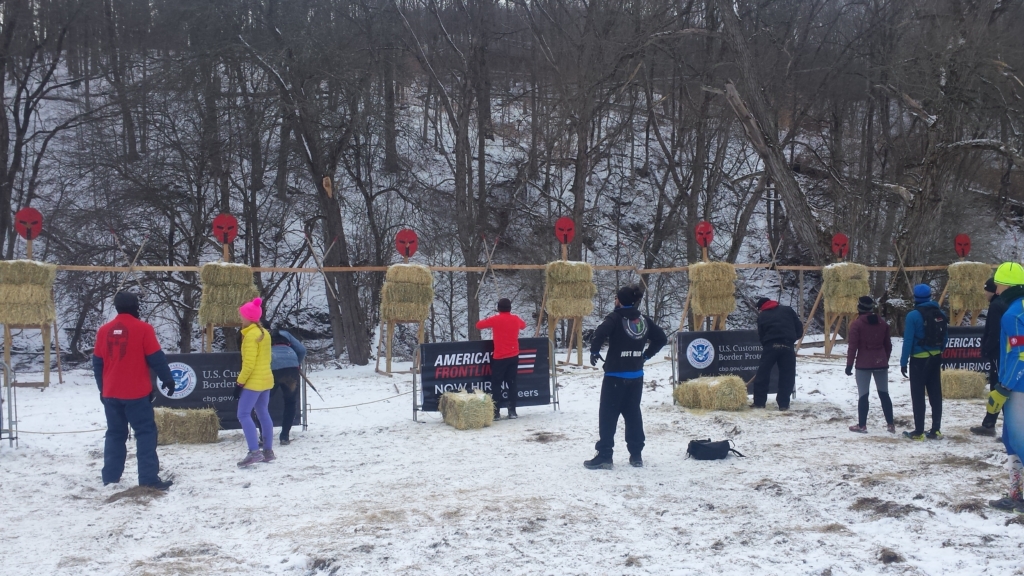 The Dunk Wall turned into the Snow Dunk Wall and the Sandbag Carry rewarded Spartans with a nice option that once you made the steep climb through the woods, you could sit on your sandbag and ride it down to the bottom.  This may not have been an option in the Elite category, but everyone in the Competitive group was taking the fun way down.  For many Spartans that I spoke to, this was the most fun part of the day!  The icy conditions were the other unnamed obstacle of the day.  People were seen throughout slipping and sliding on all parts of the course. 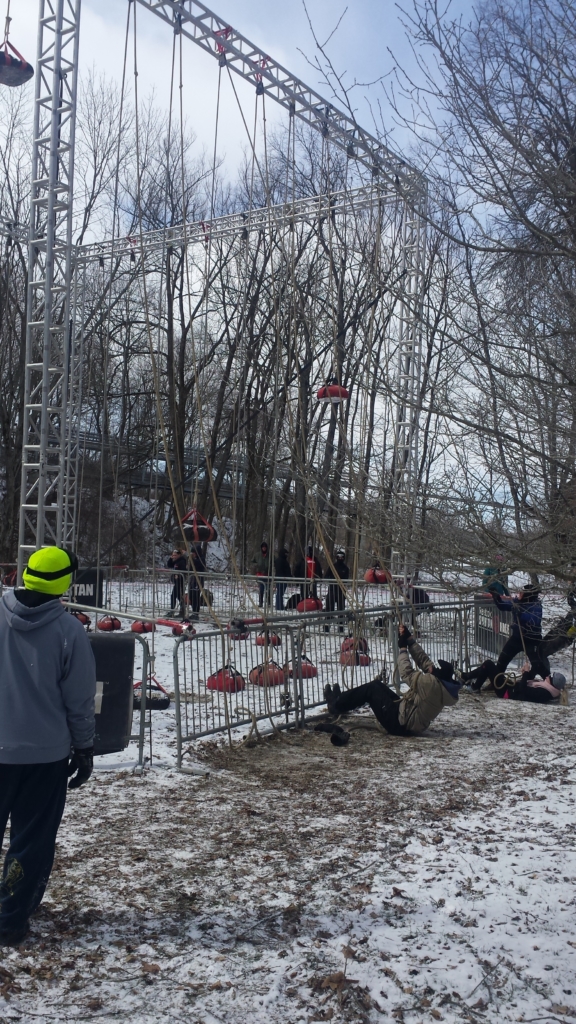 Overall, this was a great experience for me.  The cold was only an issue during the stand around time.  Once you were running, it didn’t feel like a day that never reached double digits in the temperature category.  I saw several injuries on the course ranging from sprains and maybe a broken wrist.  Several people were reported with frostbite.  I think the people who suffered from the frostbite, were not prepared for the conditions they were about to face.  With the right gear, this event proved to be a good competition that I would look forward to competing in next year.  There were special Winter Sprint medals and long Sleeve commemorative shirts for the first U.S. Spartan Sprint.