Spotlight on XX RACE at iMETTLE with Coach Jhoon Chang 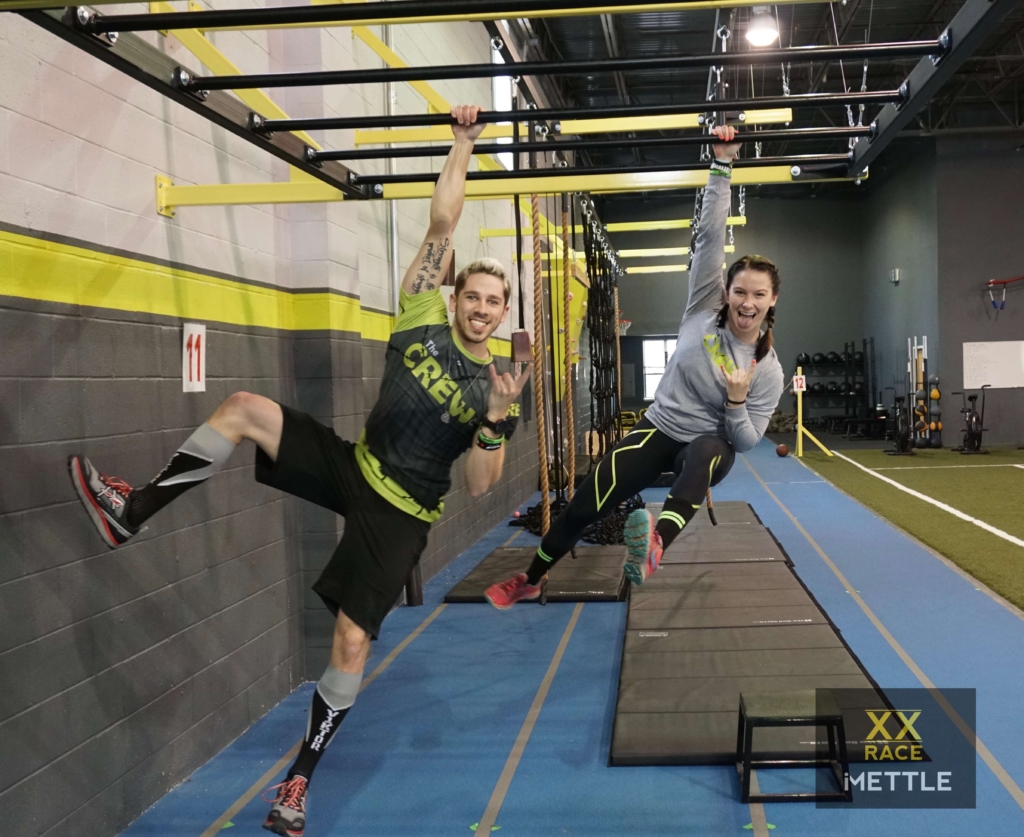 Getting to the XX RACE at iMETTLE is just two turns off I-76 in King of Prussia, PA. Finding it is as easy as following your nose. A huge bakery fronts the shared building. For some unknown reason, I chose to follow the alluring scent up front instead of the three guys running towards the back where iMETTLE resides. Instinct should have kicked in, I know. Follow the sweat trail, not the sugar trail. The problem is, there aren’t any other indoor OCR training gyms in our area. So this was uncharted territory.

Jhoon Chang, the owner, emphasized this point a lot. This is indoor OCR training. What you see on the course is what you’ll see here minus the mud, water, and terrain. That sounds like a pretty good deal to me. Everybody else there thought it was great too. I noted a large cadre of Philly Spartans, Spartan 4-0, and Crew team members there. Word is getting out. 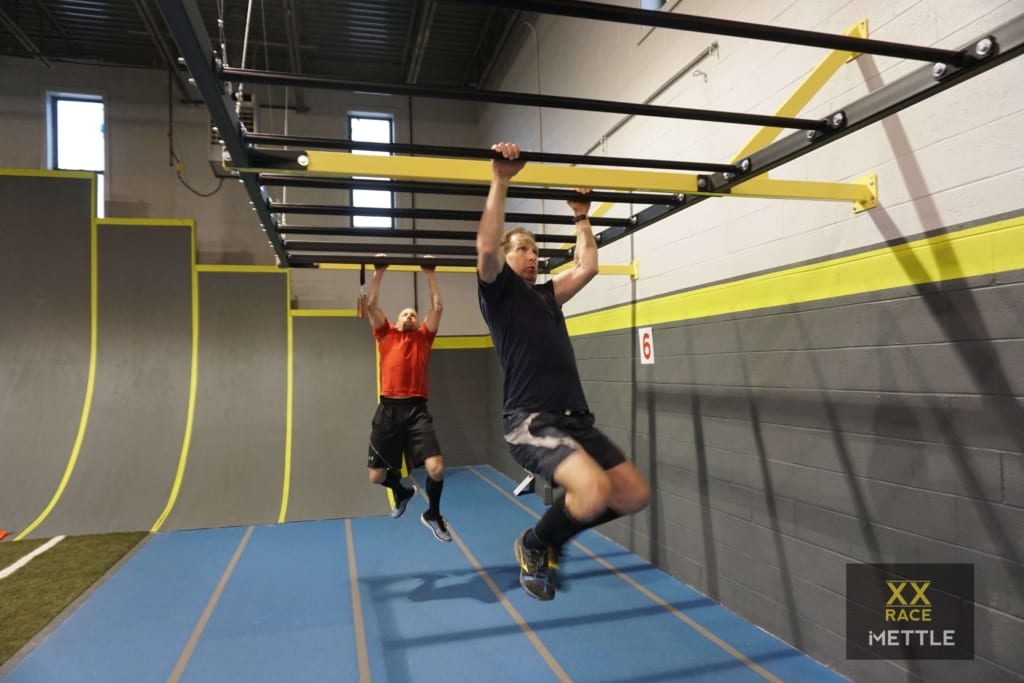 Philly Spartans neck and neck across the monkey bars

#1 Derek Rozanski of Crew said in a FB post, “Woooo! Great event again by the way, it’s like a stadium sprint on steroids. So much better and a great workout.”

A number of racers today were either first or second-timers here. These seasoned athletes believe they have found a new home. Some of my Philly Spartan friends already come here every morning. One who is SGX certified just signed up to be on the training staff. I spoke to one young couple who had just finished their 21 laps. This was their second visit but only the first time coming together. Teaming up was such an encouragement that the girl slashed ten minutes off her race time. Like every OCR event I attend, motivation never seems to be a problem.

The XX RACE also included a later session for the kids. Parents got a lot of up close and personal time with their kids, the obstacles, and one-on-one time with Coach Chang. He encourages parents to start their kids young at iMETTLE so they can learn athletic technique and form. The earlier they learn these muscle memories, the better chance they have of remaining injury free for life. XX RACEs happen twice a month at iMETTLE. Schedules are on line and Facebook. Signups and waivers are all automated via email. 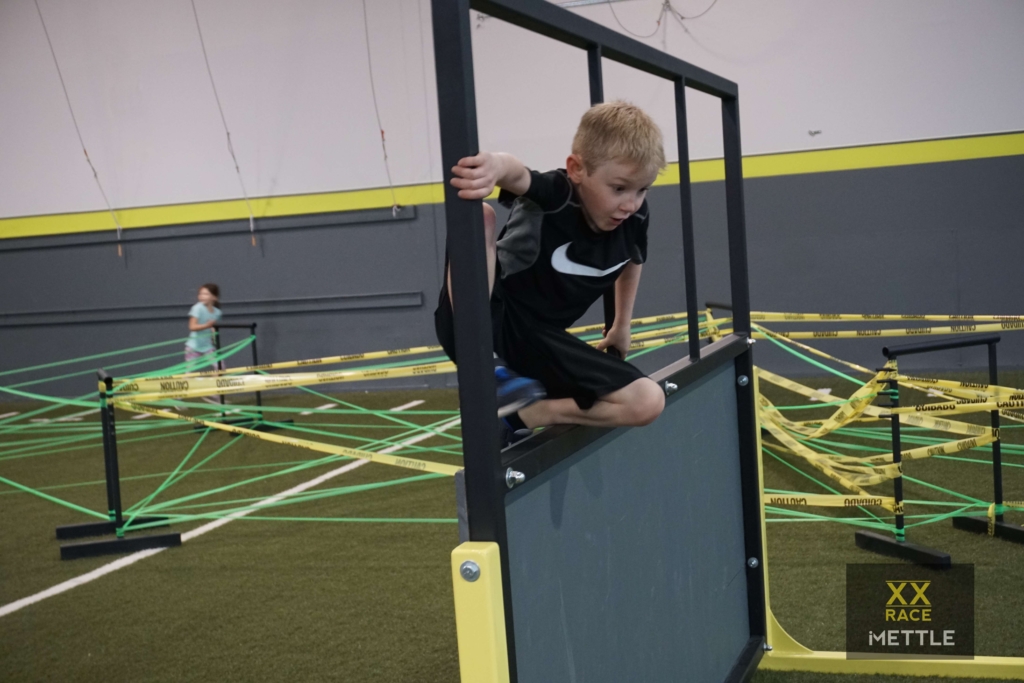 iMETTLE offers training every day starting at 0500. Chang told me the whole thing started years ago after he got into OCR and wanted a place to train for races. He answered his own question as many of us do by building one in his garage. He then went on to get certified as a SEALFit trainer. Like all of us OCR addicts, this just wasn’t enough. And so iMETTLE was born.

It’s a 12,000 square-foot facility with an astro turf floor. Obstacles cover every bit of the floor, walls, ceiling, and parking lot out back. It’s jam packed with toys. I love it. Yesterday’s XX RACE was a 21 obstacle sweat fest, with 4+ miles of running. Most folks were there tuning up for the NJ Beast coming next weekend. In between each obstacle you run about a quarter-mile loop with a small hill. The course started with an obligatory climb over a six-foot wall into the starting corral. From there, obstacles tagged every body part. The easiest was the 25-yard low wire crawl. After that, things got tough. iMETTLE has two Platinum rigs that Chang likes to change up every day with different grips. Four warped walls stand in one corner and rise from about eight feet up to fourteen feet. Rope challenges include two 20-foot climbs and one 30-foot traverse. The walls have Herc hoists, peg boards, and a rock wall. On the high-tech end, there are three each of wind resistance bikes, rowing machines, and alpine ski machines. 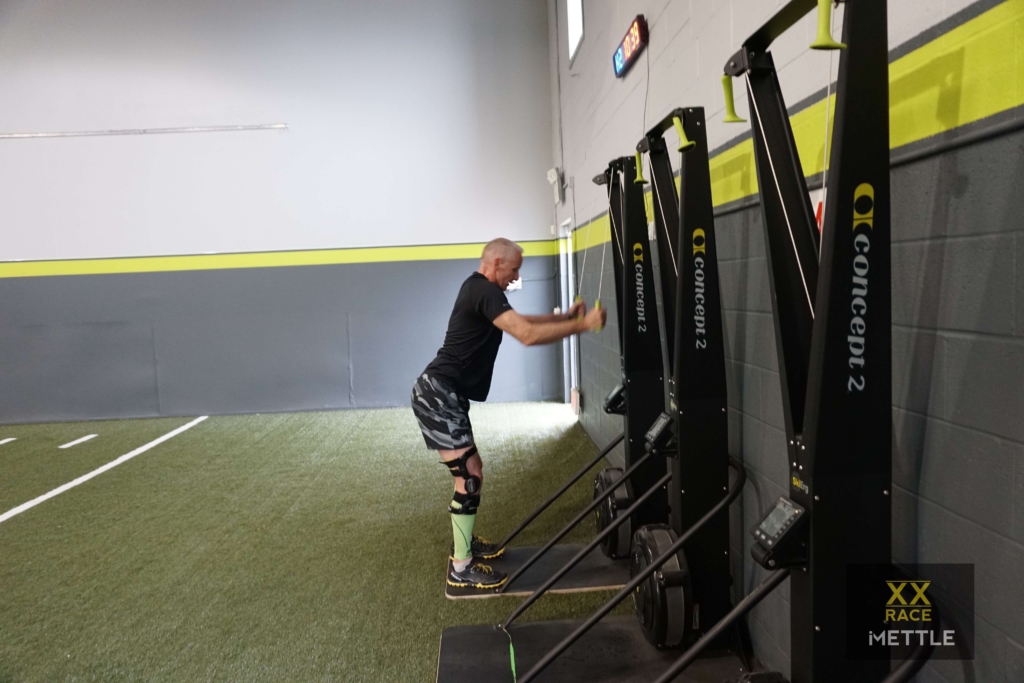 500 meters on the Alpine Ski machine 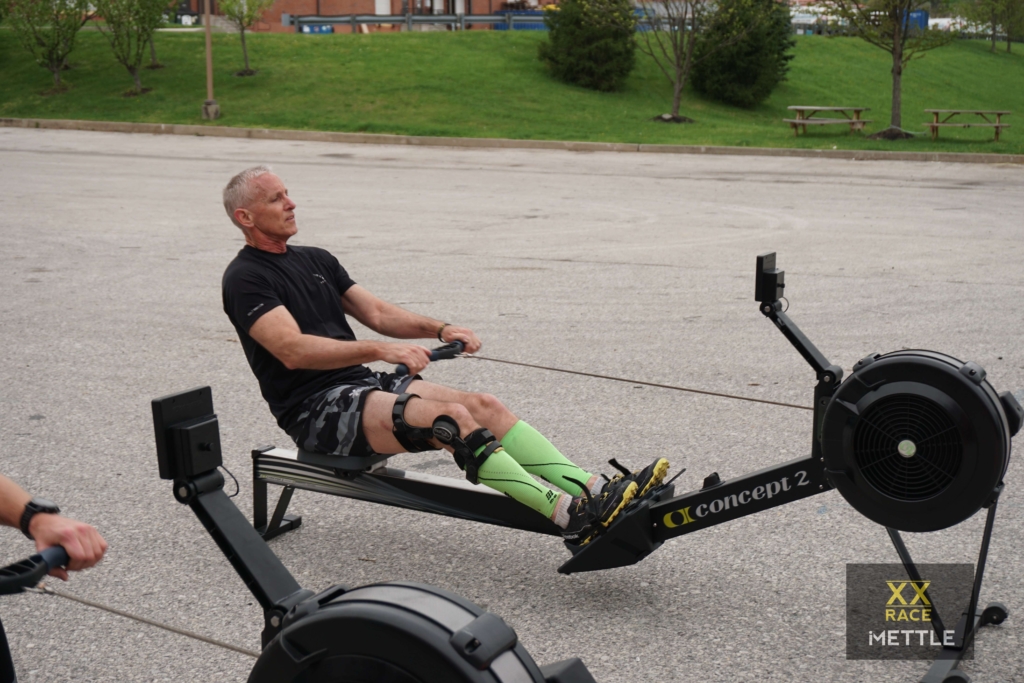 500 meters on the rowing machine 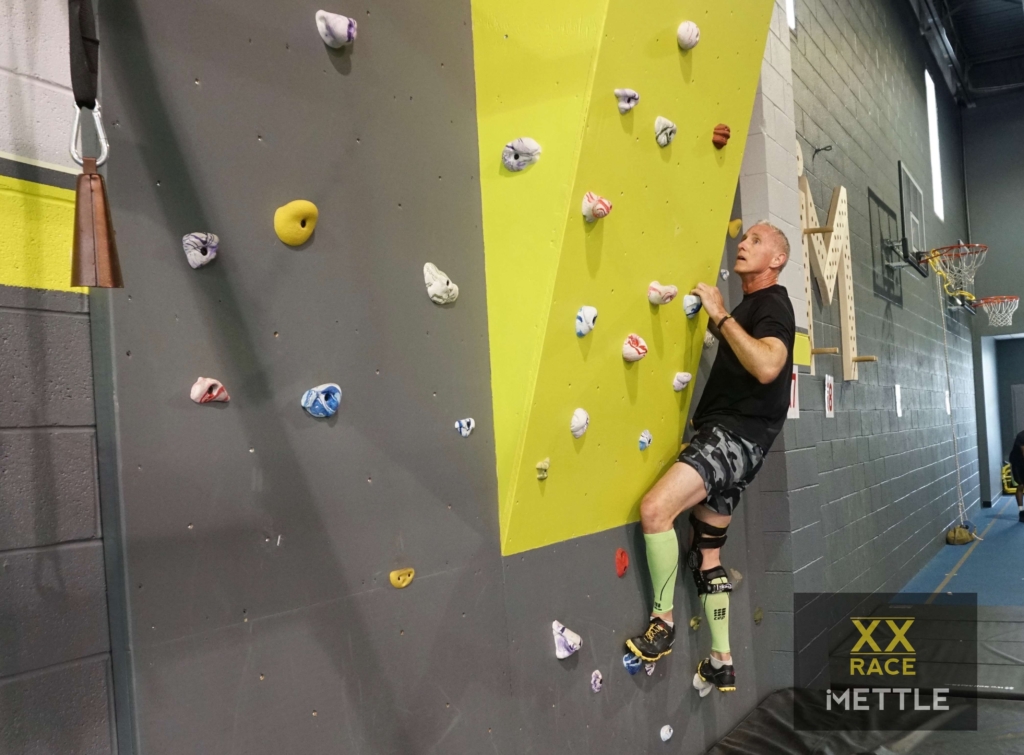 In another room, there are some weight machines and a large seated film area. That caught my interest. Chang explained that many athletes come in with very poor form and technique, especially in running. He provides video analysis along with professional critique. He has some folks on staff with very impressive credentials who help clients in this unique way.

Coach Chang also offers something else unique and emerging in the OCR industry. He’s developing OCR Standards Tests.   “It’s a physical test (burpees, pull ups, rope climb, dead hang, 1.5 run, etc). The goal of the OCR Standards Test is to create a fitness benchmark for OCR athletes. For example an open class racer could take the OCR Standards Test on their own and compare their test scores vs. Elite Racers. They could use the results to help them measure their fitness improvements and maybe to see that they might be ready to move up to competitive or elite class.” 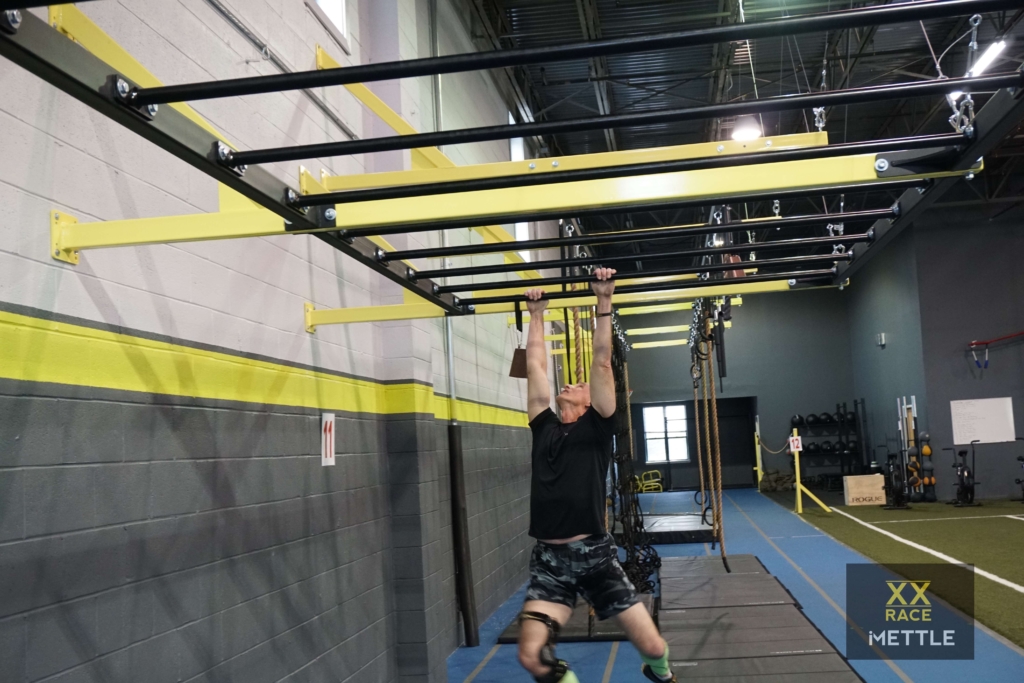 Chang’s main goal here is to help people learn to safely train and compete. One would think with all the obstacles and equipment that it would be all about the physical part. Chang overrules this typical OCR athlete ailment of overtraining with what he calls under-recovery. We don’t sleep enough and we don’t eat well. So class and coach time puts a lot of focus here. He mentioned one client who is an Olympic caliber athlete. Along with training and competing, she is also a full-time student who has her calendar so full of other activities typical for a teenager that she only manages four hours of sleep a day. Chang is concerned that without choosing a priority and getting the proper recovery, this girl may end up on the sideline.

iMETTLE offers this level of coaching that I don’t hear about much in OCR. He’s got the right equipment, background, and a growing staff of certified professionals to help athletes of all levels reach their next levels. Hopefully he will get the market to keep things going. For anyone in the area or just stopping by on the way to the NJ Beast, Palmerton, or any of the dozens of other events in the tri-state area, iMETTLE is the ideal place to train and tune up. I already have three friends lined up for my next session.