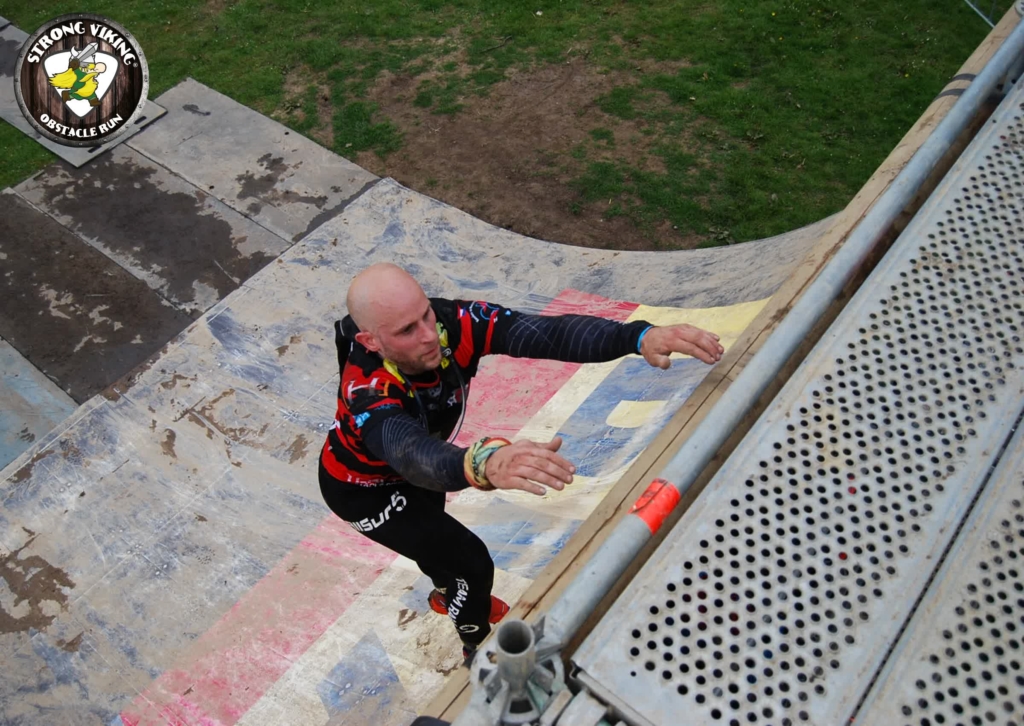 Last weekend was Strong Viking number 2 this year for me. Saturday most of us started the first wave of the day. Lieke, Mischa, Niels, Björn, Ronald, Ewoud, Kevin and myself started on the first 19km course. My goal was to do a mini-Varjagen weekend. Varjagen at Strong Viking means 4x 19km beast. I was planning on doing 2x 19+13km. I felt confident. I had no pain in my injured leg and was ready to diesel through the first 32km.

The first obstacle, the Dragon Tail. One jump, solid high footlock and already able to reach for the bell. Because of the distance, I was planning on running, we decided to each do our pace. I started to get ahead of the group. At the Viking Carry, I ended up carrying a guy twice my weight but didn’t care.
Next came a bunch of typical Strong Viking obstacles, Viking Logs, Viking Battle, Hammer Banger, Mud Crawls, Balance Beams, Log drag and then the first Mud Trenches.
Next the Shield Carry and through the woods towards a huge field filled with a bunch of obstacles. Starting with Brother Hill. Since I broke free from the rest awhile back, I needed help from others getting up there. Two guys were struggling to get up. I instructed one of them to lay on his stomach while the other guy and myself pushed him up the ramp. Stretching out as far as we could, fighting for grip in the mud, he couldn't reach the net. So he had to jump as well, us helping him with a push. As soon as his hands grabbed the net, he was able to hang on with one hand, twist on his side and pull the other guy up with his feet and the free hand. Next, I got a bump from a few other guys to reach his feet and be pulled towards the net as well.
I remained there for a few runners to get up to the net the same way I did and then was off towards the next obstacle. Sled pull. Or better yet, car chassis pull. Cars so heavy you needed at least five persons to get them to move. Next, Raise the Sails. This time with pulleys to pull the kettlebell up so took a lot less effort than the previous event.  At the monkey bars, I was able to skip 2 bars at a time, taking only 3 or for swings to get across.

Then came the finishing obstacle for the 7km course. Storm the Castle. Still remembering the pain at the toughest ramp, I felt anxious to go. I had to try. Slow in the beginning, picking up speed just before the ramp and up I went! 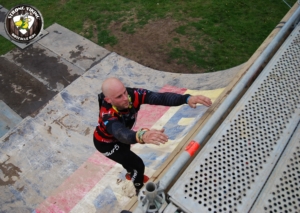 Next past the Viking Walls, which took no effort to pass and the first effort to not get shocked at Thors Lightning.
Back at the muddy fields came a bunch of muddy obstacles, the Mud Mile, Skeleton Frame, climbing over logs over water, another mud crawl and so on. Followed by a long run, tire flips and, another long run.

Followed by a sandbag carry and the Hamer Throw. Missing the throw I did the penalty burpees and moved on towards the Dragon ropes. A looooooong traverse on a thin rope. Made it across but took its toll on the hands and the burpees I just done didn’t really help either.
The final obstacle of the 13km course was the Platinum rig. Mixing things up they added a ninja stick right after the monkeybars. Barely managed to ding the bell. Another load carry, walking the huge tire around a pivot, and next the to Gunnors Struggle 2.0. Like last time I had no trouble getting across, hopping over the steps.
Another long run and then the Strong Wall. Easily up and over. Rope Climb XL, managed to bruise my shin on the rope, but still on a roll! Final stretch. I noticed I was approaching the 18km point, but knew I still had some obstacles to go. Of course they overshot the distance again.
The Gunnors Ropes. Never done that one before, but turned out to be an easy hop across the beam. Next another sandbag carry over sand dunes and through a tunnel. My legs didn’t like that part, but I took comfort out of the fact that I only had to do it once that day. Next through another muddy ditch and another mud crawl towards the Weaver.
My body started to complain. Took some effort to get over the weaver, but still made it. Three more obstacles to go! Still only missed the hammer throw! Easily hopped over the Dip Walk, and there it was. The new Varjagen Saga. Shot up the inclining wall, causing a cramp in one of my calves. Jumped over the dragon back and swing across the wheels to ding the bell. Part 1 completed. Next the pegboard. Managed to get to 2/3 again, but lost my grip and ended up on the ground. Did my penalty burpees and was off towards the Walhalla Steps. The 19km finish! Round 1 completed!
I ripped off the 19km timing brace, grabbed a finisher shirt and got my finisher wristband. I stuffed the shirt in my emptied camelbag and left it at the volunteers in the finish tent. Covered in mud I moved towards the starting area. The next wave was collecting in front of the starting area. The speaker told them the area would open in a few minutes. I didn’t really feel like waiting for a full warming up, so moved towards the gates. At the gates, the speaker recognized me and told the security to let me pass and start my second lap. In a completely empty starting area I moved towards the starting wall. Boosting myself over the wall with the little ledge at the bottom and off towards round 2!

Quite soon I ran into other runners that started just before I got over the finish line. Got held up at a very nasty and muddy ditch because all the runners formed a single file line in the middle of the ditch. Starting to cramp up I passed the pileup at the entree point and jumped in on the side of the ditch. The mud was almost belly deep in the middle, but only between knee to crotch on the side. I splashed past the line, getting complains about covering them in mud and trying to win a race or something. Which only made me splash even more.
I started to get sore. After a while I ran into teammate Ewoud that ran ahead of us the first round. Met him at almost the same point as the previous round, knowing he should have been a lot further ahead of me. Two obstacles later I met up with him. White as a sheet of paper.

Complaining about being hungry. I had one gel left so handed it to him. At the mud trenches I started to get cramps. I had to keep moving.

Ewoud fell behind a little and even further at the Shield Carry. Meeting up again he told me he wasn’t going to make the 13km lap, but would finish at 7.
He later turned out to have finished the first lap as 6th person over-all. So no wonder he was a little beaten down the second lap. 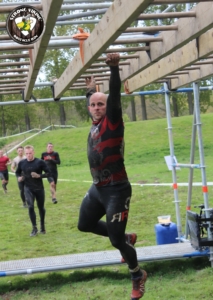 At Brother Hill I ended up with quite a crowd again. Helping a group of guys figure out how to tackle it I managed to tag along up the ramp. It wasn’t until Storm the Castle when the distance started to hammer down on me. Legs started to get tired, but still managed to get up and over. Knowing exactly what came next took some of the fun out of it. The long series of muddy obstacles, the long distances between the last few obstacles. That long sandbag carry.

Next another try at throwing the hammer. Missed it by an inch, but didn’t do the penalty. Did ¾ of the dragon ropes before my hands started to give in. Still had the Platinum Rig left to do. Struggled across. Decided to swing for the final ring and bell, let go of the rope, missed the bell and lost my grip on the ring. Better luck next time! Crossing the Walhalla steps finish line after 35km in 5 hours and 2 minutes. Felt like I ran 35km, but no significant pains.
Ronald and Kevin also finished the 35km a little later, Ewoud was brave enough to stop at 28km, and the rest did an awesome job at the 20km course! 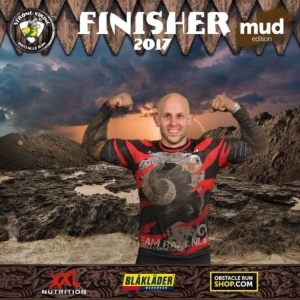 Day two was a little disappointing to me. We started out just behind the race series, because we wanted to start as early as possible. A few kilometers in I already started to feel my legs turn to mush. Took me a lot more effort to get over and across the obstacles and started to agitate old injuries.
I decided I’d see how long it would take me to do the first lap and then decide whether I’d do the second as well. Set a goal for 3,5 hours (almost an hour more than Saturday). Luckily I got to run with Ronald, so we could keep each other motivated to keep going.

Doing the obstacles a third and some a second time started to take its toll. I still wasn’t failing the obstacles, but it took so much more effort. I felt exhausted. We could keep a slow but steady pace. Had some ups, managed to hit the target head-on with the hammer this time, and some downs, didn't even get half way across the dragon ropes, but we were still going. 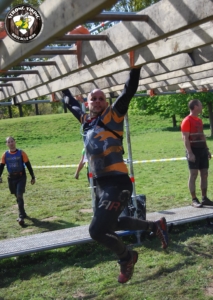 We were heading towards a finish time of around 3 hours, so half an hour within the set cut-off. But my head started spinning. Continuing for a second lap would probably mean another 2,5 to 3 hours running the same course, with the same obstacles, the same slow pace and risking injuries again. I just recovered. Should I risk finishing like that? Run myself in the ground?
I always tell my friends to listen to their bodies. Don't force yourself into injuries just to prove something. Then why was it so hard to do so myself? The chance of running a second lap (fourth actually) started to fade. Running that lap would mean I would be able to get two medals, one for the 4th beast this year and one for the two warriors and one lightning. Quitting would mean I could only get one. Heading towards the Varjagen Saga I was at war with myself. I felt like I could keep up the almost sluggish pace, but could I keep that up another 7 or 13km? I probably would end up failing a lot more obstacles. Was it all worth it? I’d probably finish last of our group. Do I want them to have to wait for me?

After failing the second part of the Varjagen again I decided to call it quits. Felt like I crawled over the Walhalla Steps and that was it. 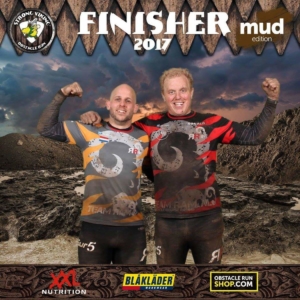 I finished 55km in 8 hours and 6 minutes, in one weekend.