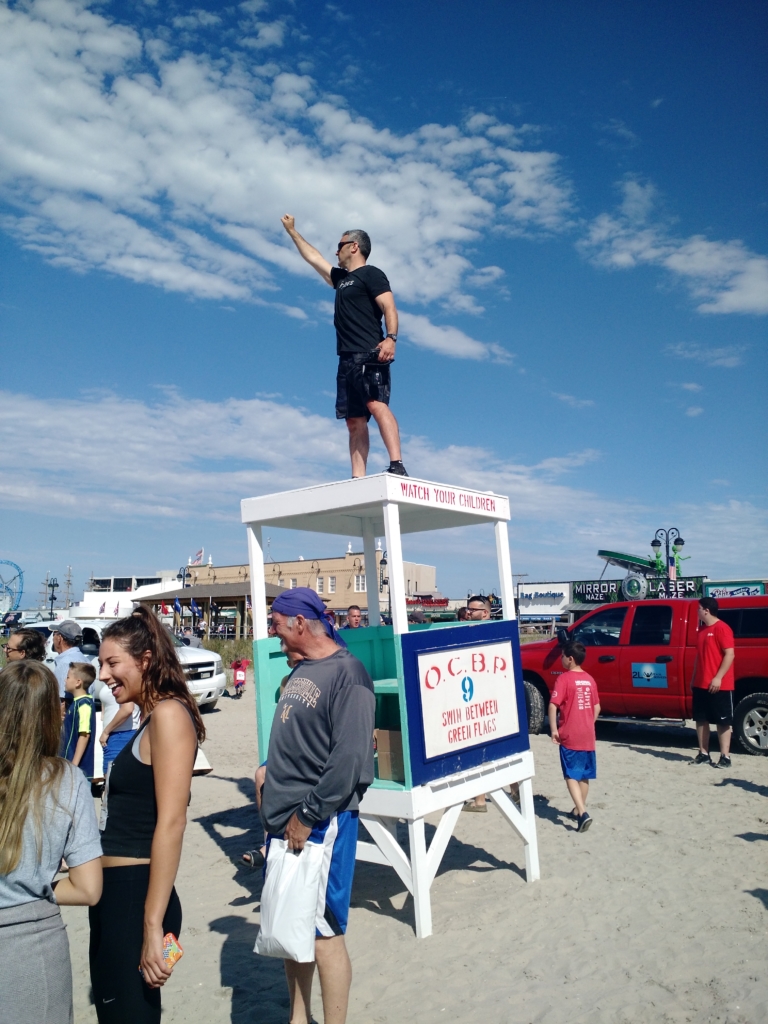 Back in March I shared the upcoming Memorial Beach Challenge 2017 by interviewing one of the race founders, Mike Vaules.  This 2+ mile OCR is all on the beach of Ocean City, NJ.  The tide was high this morning so in some spots, the beach was very narrow due to severe storm erosion over the winter.  But that funnel did not stop the 425 runners from doing this course.  No.  What stopped them was exactly what Vaules said to me back in March.  The hardest obstacle here is the sand. 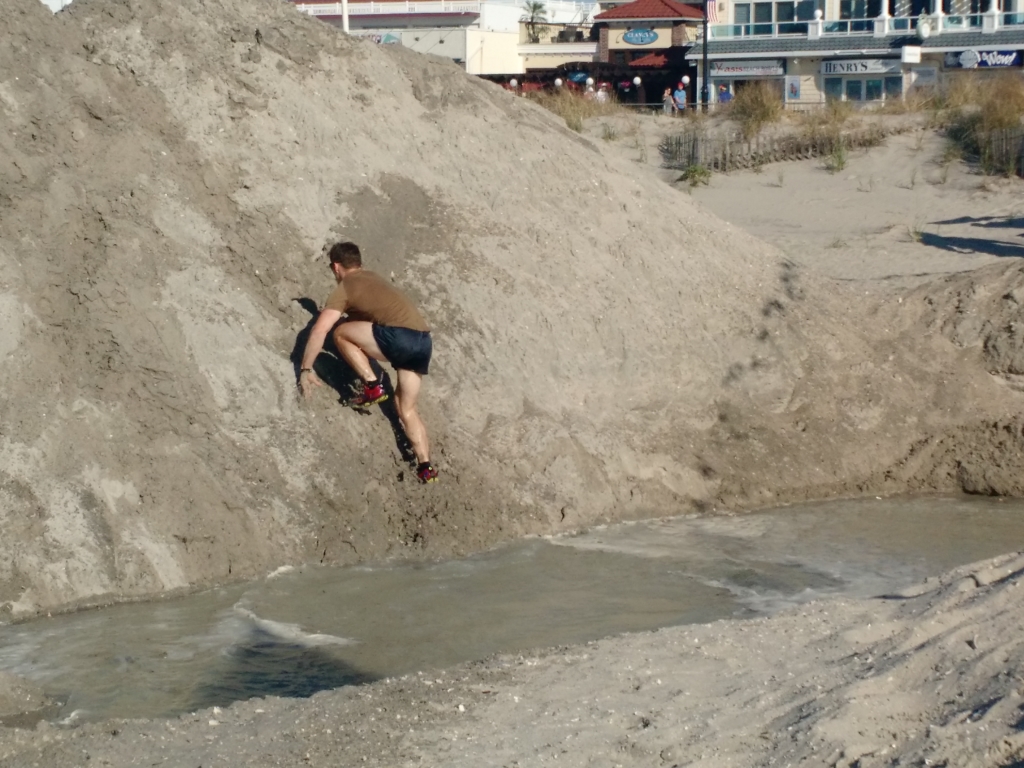 Now that’s a funny thing because, the overall winner, Don Lysinger, is a local guy.  He trains here.  Just not in the sand.  He runs the boardwalk.  He runs races every weekend.  We need to get this guy on the OCR circuit.  Lysinger set a new course record of 23:59. 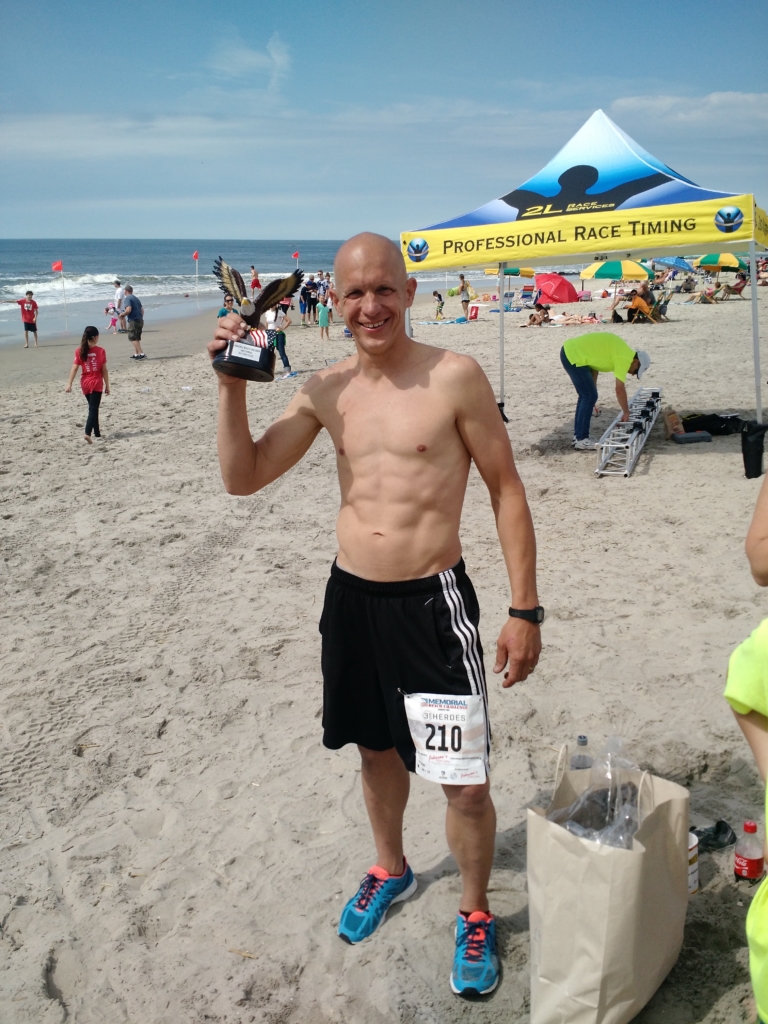 The race swag was obviously very smart and well earned by all participants.  Even the kids got a shot at the course later in the morning.  They ran a much shorter version but clearly had a ton of fun. 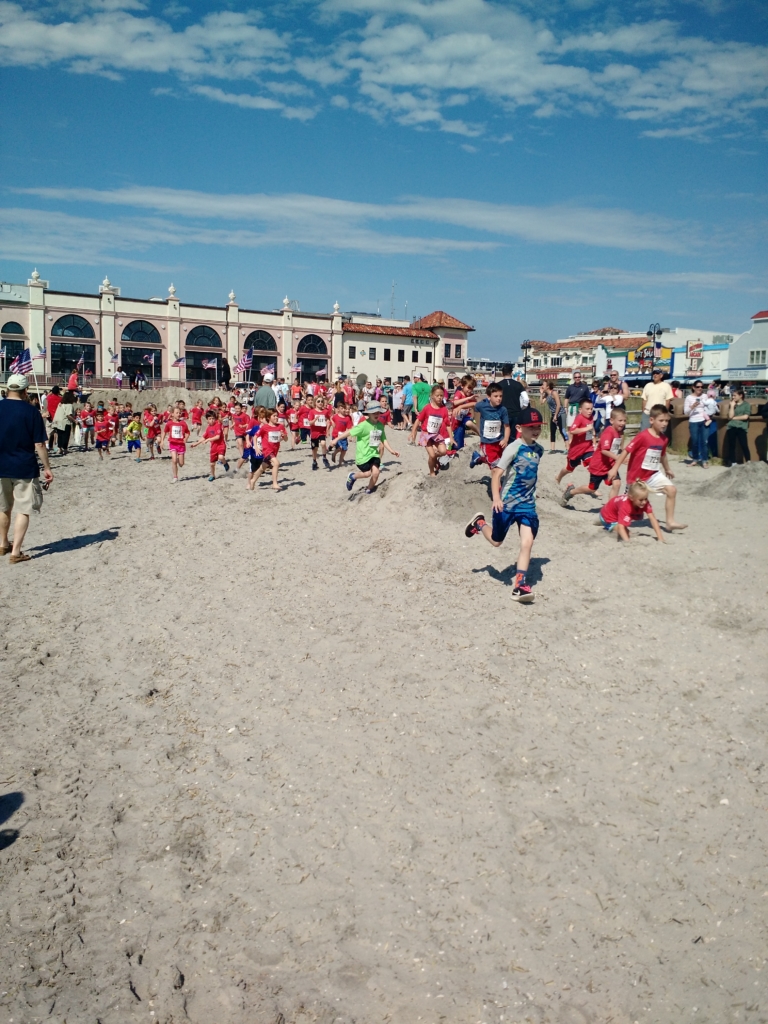 The course started out just south of the Music Pier.  Runners ducked beneath the pier to emerge on the other side where they encountered the first of many very large and steep dunes.  Coming down the other side they maneuvered across a balance beam.  Next were a few over under bars and a five-foot wall followed by a crawl beneath a camo net strung between two 2.5 ton trucks.  After a short run, they turned south back towards the music pier.  This is where the soft sand separated the crowds.  They ran about a quarter mile of what we locals call “sugar sand” wedged between the dunes and the boardwalk.  Then back under the Music Pier. 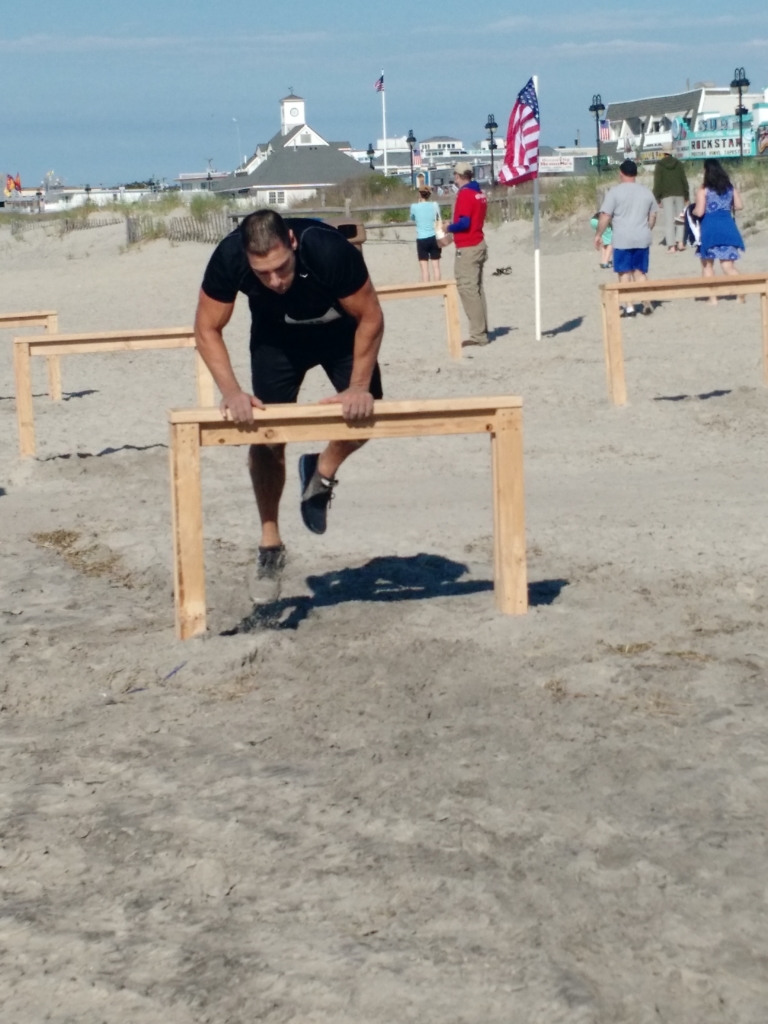 Over Under and Walls are standard obstacles

After a hard right, they hit the Ocean City Local Gym and Fitness obstacles – a one-two-three punch of big tires, 31 prone pull-ups, and a long barbed wire crawl.  After that, it was a long and exhausting run through the sugar sand again for about a half mile.  Looming ahead were four immense sand piles and pits.  The last one included a fire hose blast courtesy of the Ocean City Fire Department. 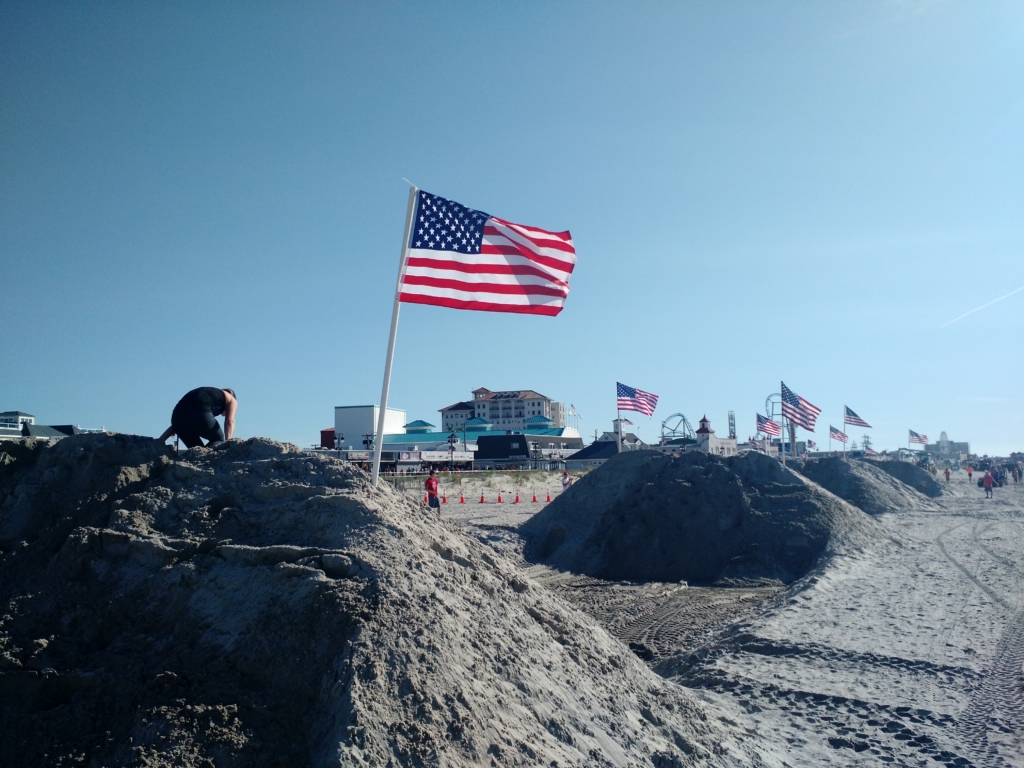 4 massive sand dunes with a OCFD hosing at the end

More running in the soft stuff followed by a sandbag carry (seems obligatory here) and then up to the first of two ABF Mud Run rigs.  Chad Mason had his crew out helping runners navigate the tricky ropes and rings on the first rig.  The next one started with a seven-foot wall, followed by monkey bars. 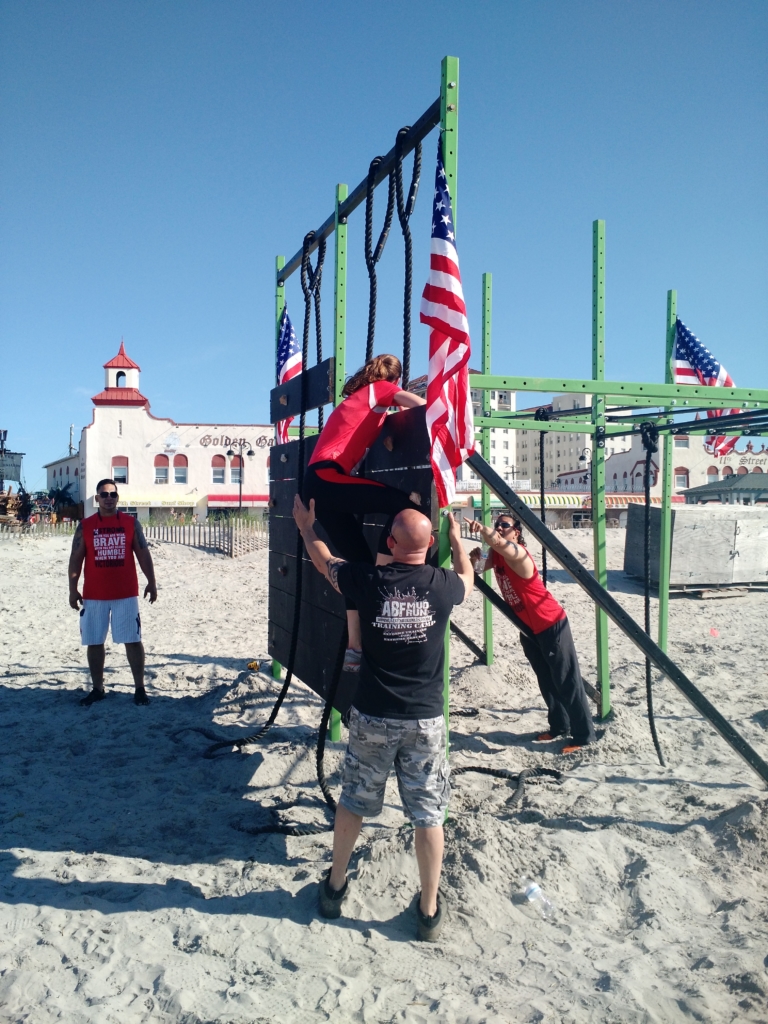 ABF Mud Run still in the game with two rigs

Throughout the course, there were other obstacles like burpees, over/under bars, and an A-frame wall.  I stopped to chat with one volunteer at the camo net crawl. He’s been doing this race since its inception.  Turns out he is the uncle of the founder’s wife.  He loves the event and thinks they should bring back the memory test obstacle because it really surprises people.  It’s unexpected. 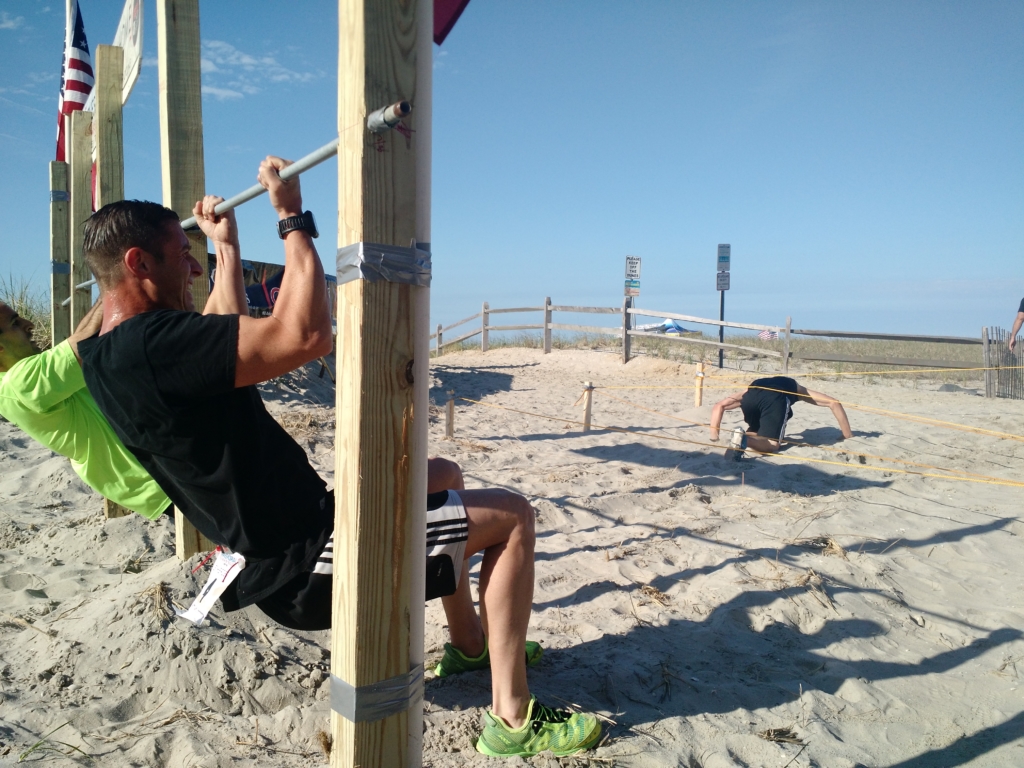 Turns out, if you know Mike Vaules, you’ll probably become a part of this great summer kickoff event.  Candidate for Governor of New Jersey Jack Ciattarelli was there to offer a few words of motivation during the opening ceremony.  Then he headed to the boardwalk, stumping for votes at the upcoming June 6 Republican primary.

As much as I advertised the race on Facebook, I did not see too many OCR folks here.  This one Spartan was the exception.  Dub, with the Philly Spartans, has a full season planned to start with the Spartan Race NJ Beast/Ultra-Beast, to last weekend’s Citifield Sprint.  Savage Race PA is next weekend.  Our favorite Blue Mountain/Palmerton is coming up. 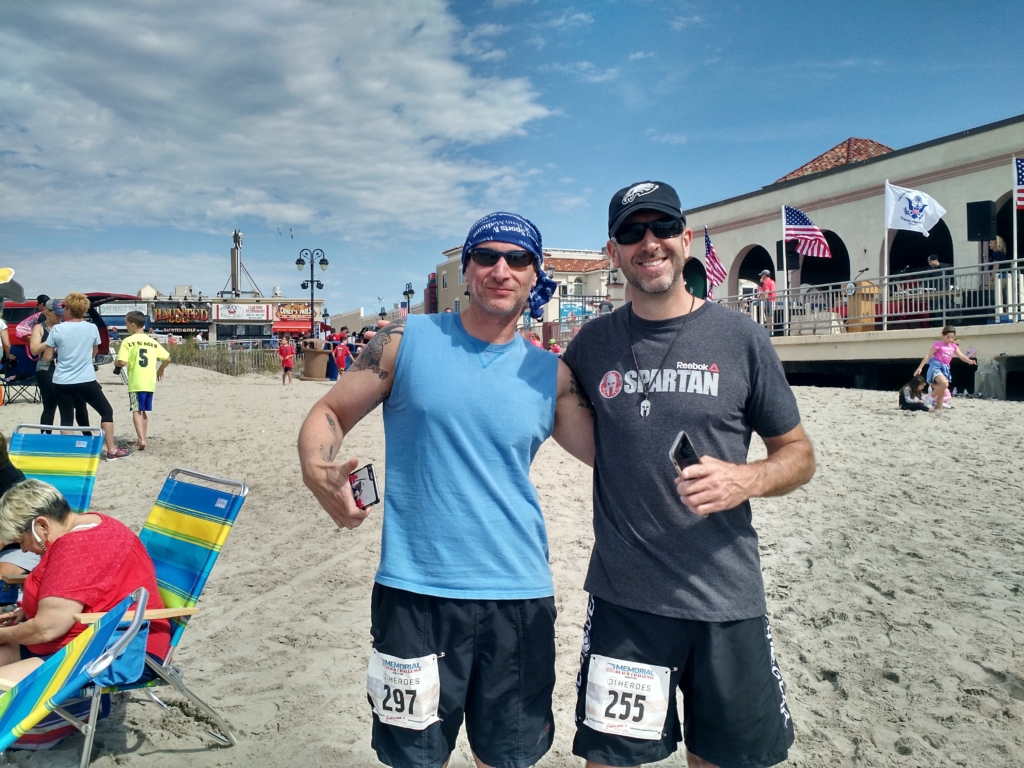 The largest team belonged to the Atlantic City High School Junior ROTC.  This crew not only provided volunteer services on the course, they also ran as a team.  They challenged one another to pull-up contests at the Navy tent up on the boardwalk.  I was impressed with their agility on the obstacles. 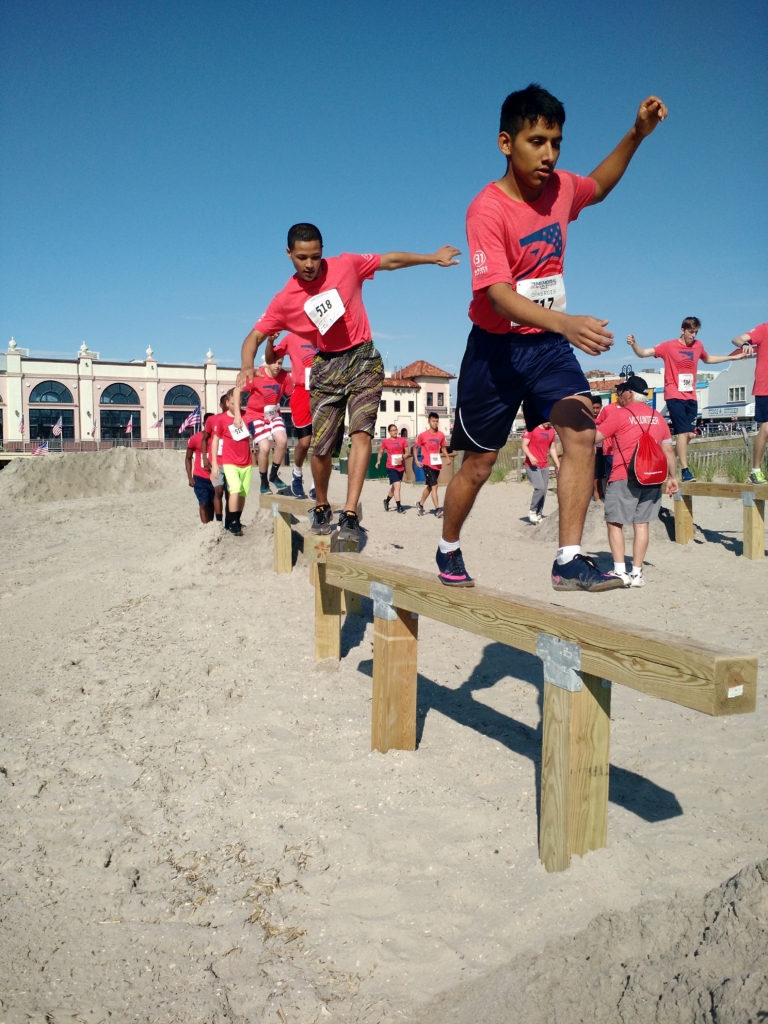 ACJROTC was the largest team and they were fast

The Services were fully represented at the opening and closing ceremonies.  An honor guard brought in the colors followed by a bagpipes quartet who played the themes of each Service.  At the closing, a wreath was laid at sea by the Ocean City Beach Patrol.

While one may assume that this is all for fun, Mike Vaules reminds everyone that this is a serious day.  Net proceeds go to the 31 Heroes Project.  It’s also a reminder of what Memorial Day is all about.  Ryan Peters, active Reserves and Navy SEAL said, “The one thing all service members and veterans have in common is at some point they raised their right hand and took an oath to defend and serve the constitution.  In doing so they wrote a check payable to the United States of America for the amount up to and including their life.  Today, Memorial Day we honor those who had that check cashed in full and invested in the freedom and security we enjoy today.” 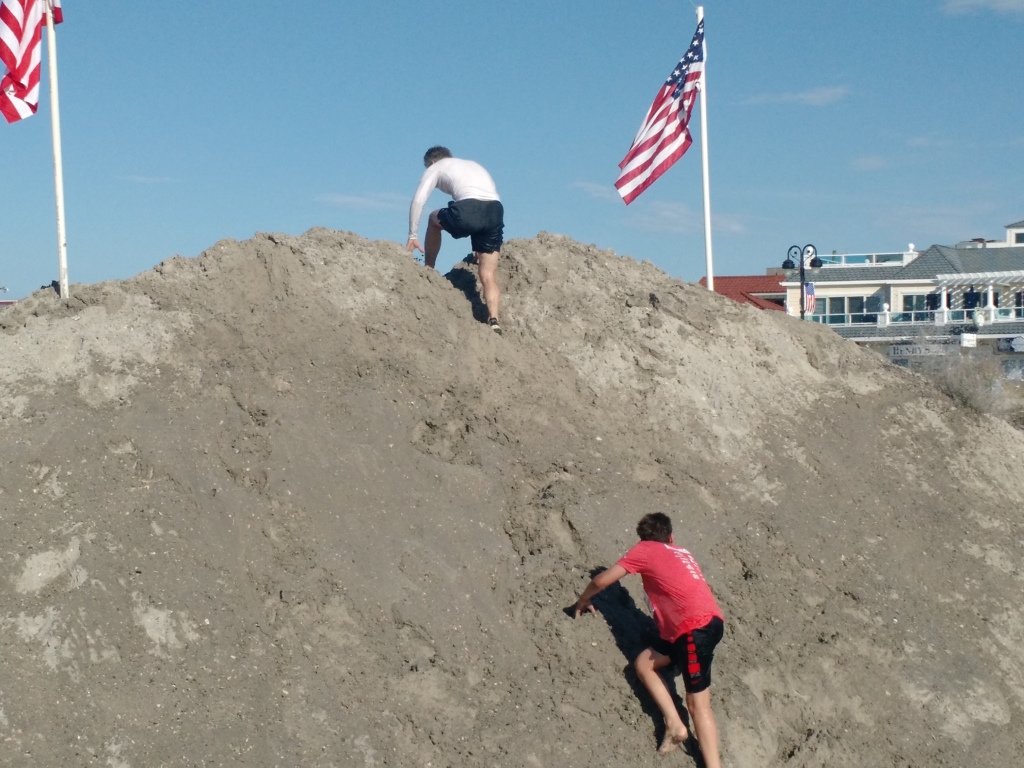 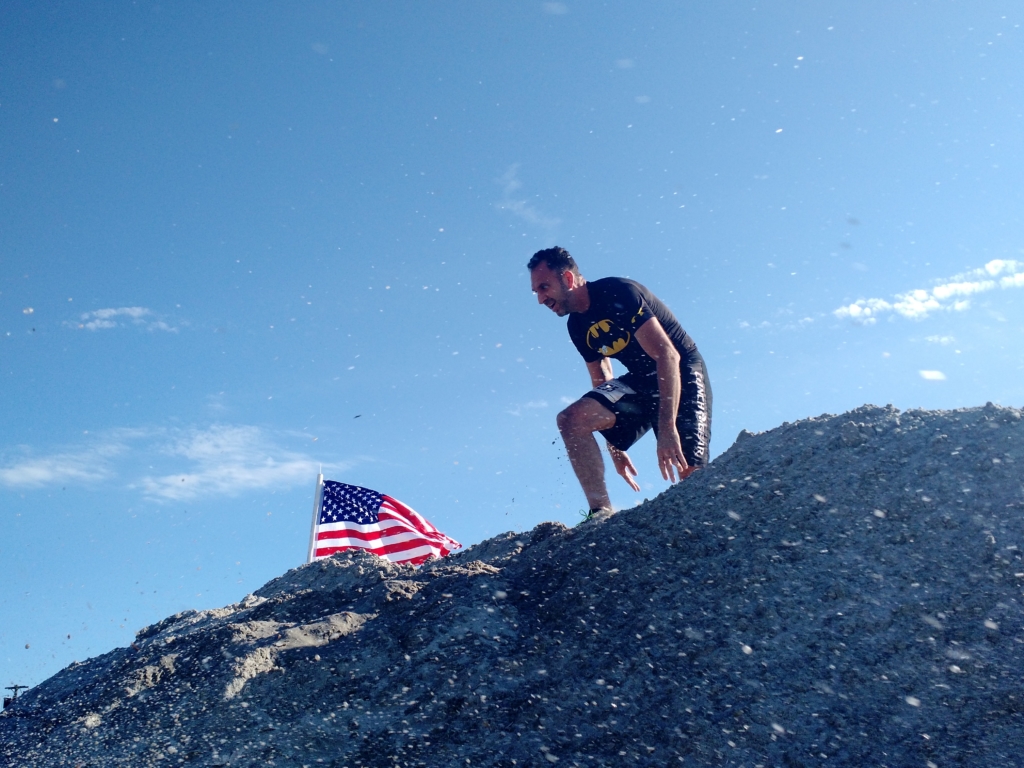 On a completely separate note, what trip to the shore would be complete without some great boardwalk food?  After running back and forth to photograph the race and interview people, I then took off on a six-mile boardwalk run mixed with 100 burpees, ten at each cabana.  Needless to say, my fuel was exhausted on this beautiful, sunny, 80-degree day.  So my wife and I ate a very early dinner at the Hula Grill, feasting on teriyaki chicken, sticky rice, and mixed greens salad.

My perfect day at the shore was complete.  Come on down next year and see how tough you are in New Jersey’s sugar sand.

Have you done a Memorial Beach Challenge?

Leave your own Memorial Beach Challenge review and feedback…