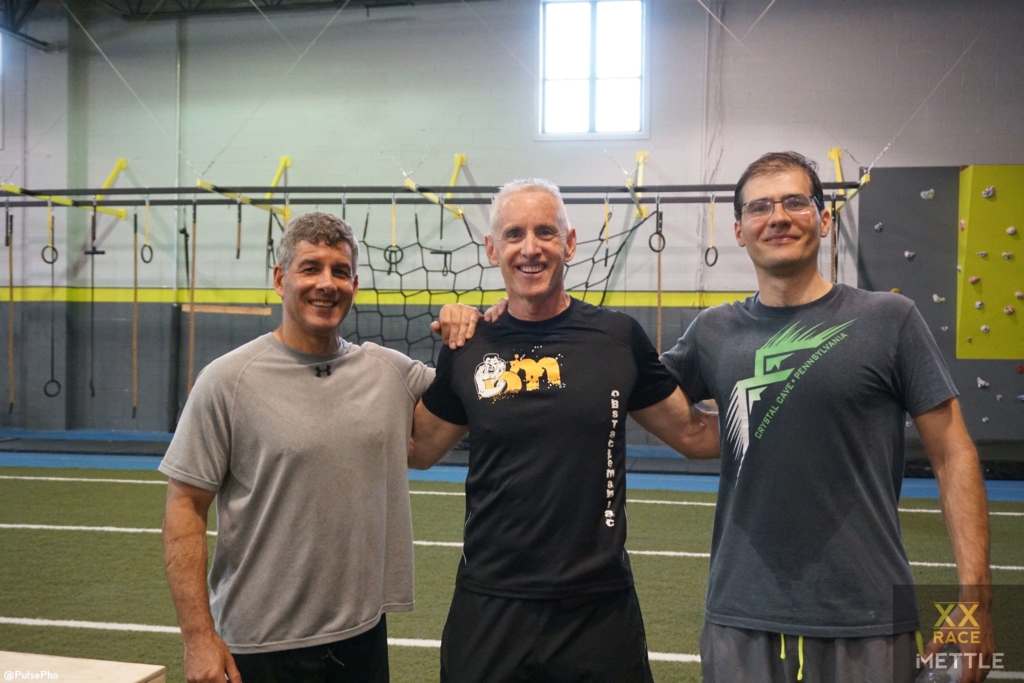 Do you remember your introduction to OCR? Were you one of those who came so slowly, so reluctantly, heels dug into the ground? Yet at the same time, you engaged in all the talk, looked at all the pictures and videos every Monday morning, and pictured yourself in every one of them? Were you all talk and no show?

I suppose there’s one in every crowd. I just never met one.

Most people I have met over my years in OCR are either totally in or totally out.

It didn’t matter how much encouragement I threw at this guy. No amount of enticement, no shrouding from potential public embarrassment, no number of friends around him jumping on the bandwagon could convince my friend Steve to even try a workout. He just kept saying he’d think about it, plan around it, and one day, probably do it.

That day, or so I thought, came about a month ago on a business trip. We had some extra time to go to the gym for the afternoon. So I baselined him. Put him through the basics of core, upper body, balance, strength, and speed. He nailed it all. I thought, this guy is full of it. Just BSing me all this time. Now he has no excuse but to race.

In the meantime, I turned our other bud Ed onto the iMETTLE gym in King of Prussia, PA. I’ve been training Ed on and off since he did the Citizen’s Bank Park Stadium Sprint last year. He’s hooked. He was an easy catch. He’s part of the reason why we thought Steve would be easy too. Steve lives really close to iMETTLE. So why not go there with Ed some Tuesday night for a training class? Nope.

Well, I’m not sure what finally clicked, but Steve showed up last Saturday morning at 0730 for an XX Race at iMETTLE.   My friend John and I were already there warming up for our 0800 start time. I was happy but surprised that Steve made it. Now we’d find out for sure what this guy was made of after a very good showing at the baseline workout. 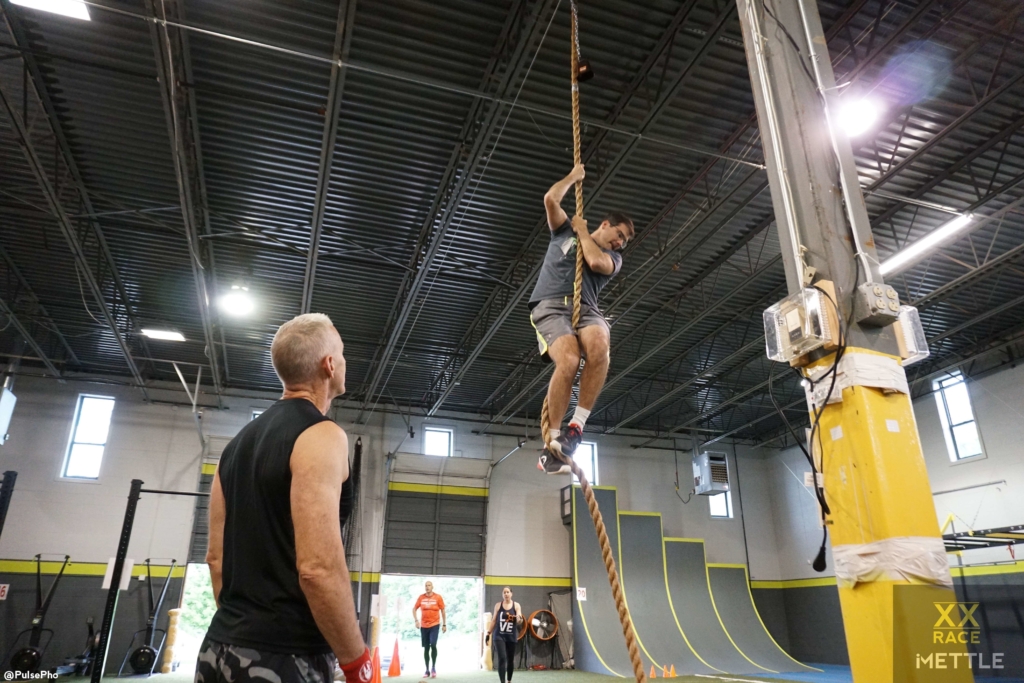 While he warmed up, I walked him around the course. I demonstrated the obstacles and answered his questions. He did not attempt any before the race. We took a look at the lineup board. Twenty obstacles, all indoors (a very rainy day), each one interspersed by about a 1/15th mile loop run. 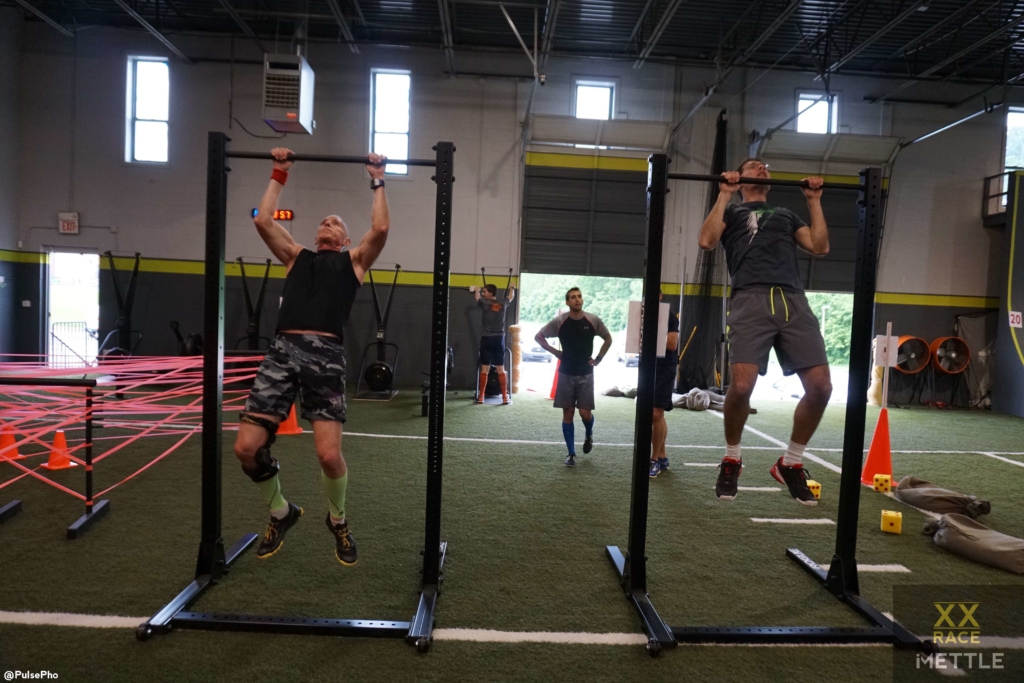 Jhoon Chang, owner and operator of the XX Race at iMETTLE conducts these races every month. Local OCR athletes like those from Philly Spartans now come here to train. Everything is here. Three rigs. Monkey bars. Rope Traverse. Rope climbs. Pegboards. You name it, iMETTLE’s got it. Almost. They have a five-foot wall. I asked for some bigger walls like out on the course. Chang assured me they are on the way courtesy of Platinum Rig. He’s getting an adjustable wall that will go from vertical to inverted. Perfect. In the meantime, there’s plenty of gear here to kick your ass. 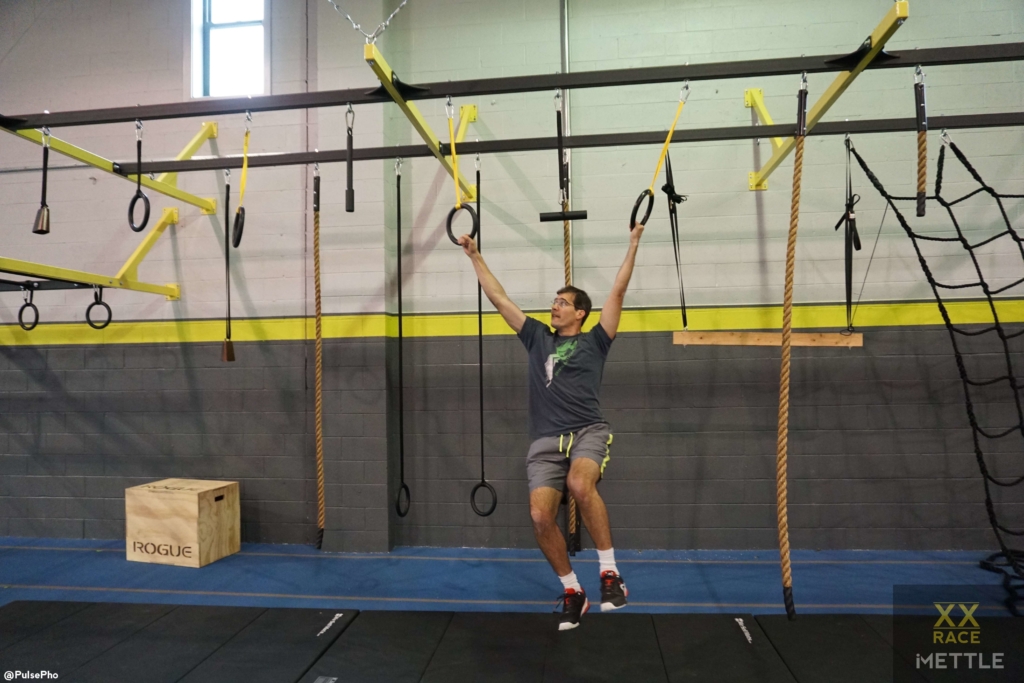 Steve, John, and I took off at 0810 and for the next hour and change we conquered the course. Steve had absolutely no problem with any obstacle but the rock wall traverse. He was wearing tennis sneakers, a forgivable trespass for a newb. He did his ten Mr. Spectacular penalties and stayed with me the whole time. His only complaint was the running. He understood that was just a matter of getting the right sneakers and then putting in the miles. 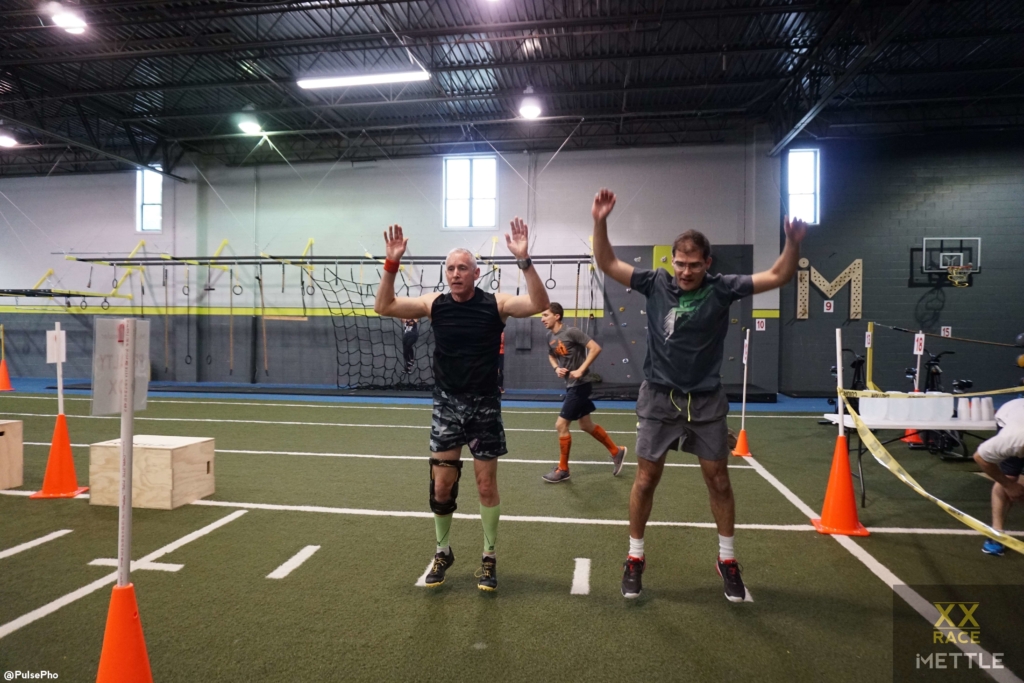 At the end of the race he was pretty gassed. Or so we thought. Like a Siren, the warped walls called out to him. He could not resist. At about six-foot three, Steve had no problem doing the ten-foot wall. He pondered the twelve-footer, then took off and cleared the top almost in a full muscle-up position. In other words, he could have practically walked up the fourteen-footer. 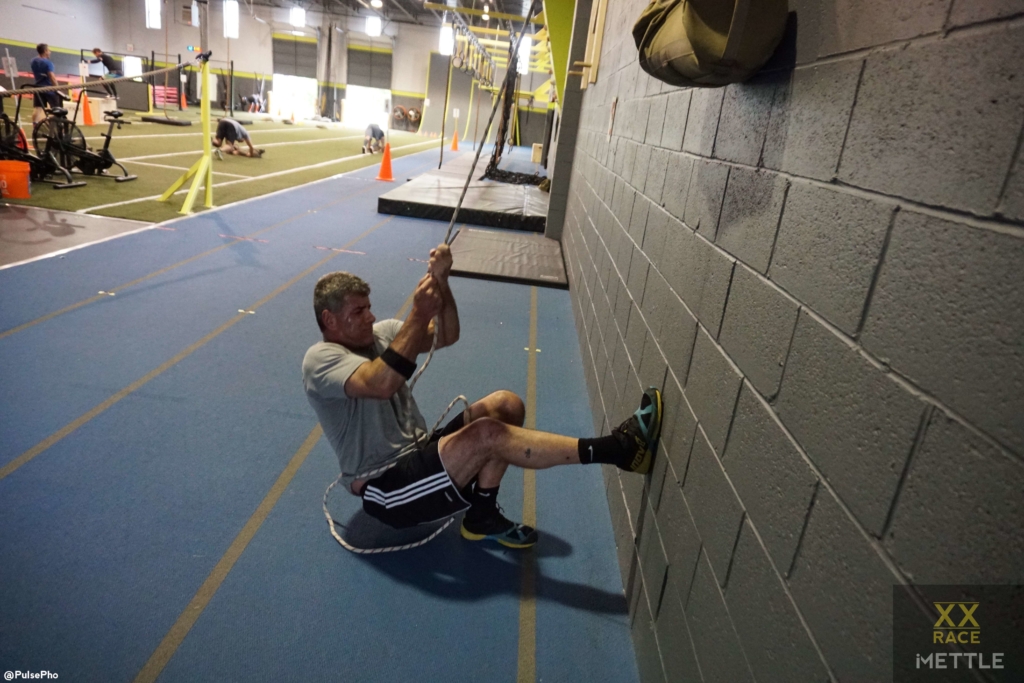 The Herc Hoist takes a bit of technique

He downplayed the whole thing while the rest of us just gawked. Who was this guy who just walked in, having never done this stuff before in his life, and just nails it all? A natural? Some secret military training life he’s not telling us about? We don’t know. Steve just downplayed it all. Said he’ll probably be back. It was fun. 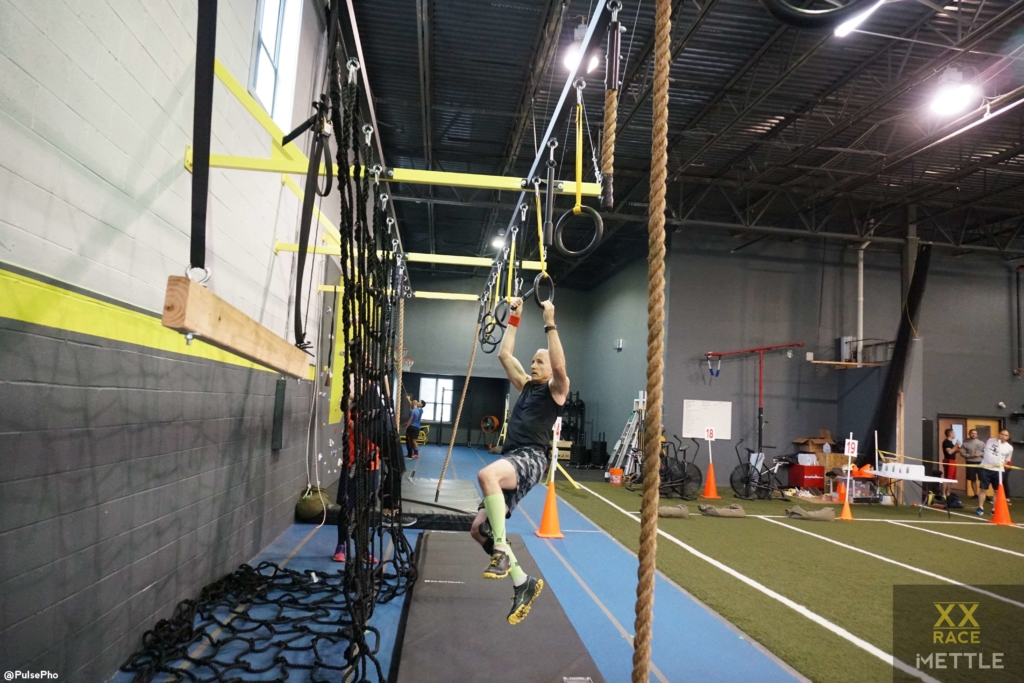 I'm about to get stalled

Wait, wait, wait! What about a true test of OCR? Come with us to Palmerton next month. He knows the mountain. He’s skied there before. He balked at the running uphill part. OK then how about the CBP Sprint this fall? We’ll all be there. We’ll run as a team. No mud. No hills. He balked at the heavy jerry can carry up and down the stairwell. Never mind that he had no problem carrying 50-pound KBs for a few hundred yards at his baseline last month.

I just can’t figure this guy out. I want to train him so bad. He just might be that sleeper natural we all look for our entire lives. At the end of the day, I think I convinced him to get a good pair of OCR sneakers. He’ll probably go for last season’s Salomon Speedcross 3, size 12. Maybe then he’ll run once or twice a week he said.

On the other hand, iMETTLE Coach Jhoon Chang has a concept performance assessment germinating for OCR athletes. Right now it looks something like this:

“I believe that the fitness demands of the OCR athlete are unique compared to any other sport or physical activity. It takes a true jack of all trades athlete. A non-specialist. A hybrid athlete. Someone who has no weakness, because the sport will expose them. So far we believe the following physical and mental qualities are requirements of an OCR athlete.

Relative strength. They need to be strong for their bodyweight

Endurance. At its core OCR is a running endurance sport

Durability. You cannot race if you get injured

For now, I will leave it at that. My next visit to iMETTLE will be to put this 55-year-old body through this baseline. Coach Chang’s method is designed to test both the athlete and some current theories like,

“If we can make an OCR athlete stronger without adding body weight, they will the run faster and be a more durable athlete.” Chang is in the camp of “the runner who is stronger relative to their body weight will out run a runner with better running mechanics and running form.”

His business partner, a former Olympic-level track and field competitor, believes the mechanics and form will win the race. The combination of the two at iMETTLE is sure to produce some high-caliber athletes.

Regarding durability, form and mechanics definitely, wins. Athletes show up to iMETTLE injured instead of running better races. (Why do we always wait until we’re hurt before we go for help?) Instead of correcting technique, they continue to race, accumulating additional trauma.

Recovery can only help so much at this point. But it is still a vital element for the OCR athlete. Too little sleep also adds to the probability of injury.

Mental toughness is certainly a huge factor in OCR. Coach Chang sees athletes at iMETTLE who can perform an obstacle without problem, but on race day fail them. These athletes “tend to have confidence and self-awareness issues: Negative self-talk and emotional control.”

It sounds like a few trips to iMETTLE is worth your time to get in shape, get mechanically fit, and get your mind right for the sport we all love – OCR. That’s why I continue to go and bring my friends with me.