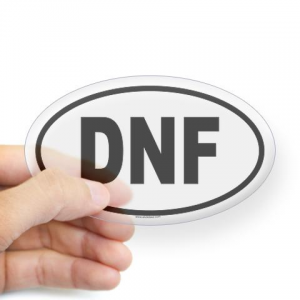 In every racers life, as they push harder and harder to achieve new goals, the inevitable DNF happens. A DNF stands for Did Not Finish it is a monicker attached to both race results and a term used by many racers to describe a race or event they did not complete. A DNF on a race record can be devastating, especially when an athlete prepares for the events for months and sometimes even years. For those who race often will someday encounter the DNF monster.

It might be due to the weather, time cut-offs, a missed step leading to a twisted ankle, or a host of other reasons. Simply sometimes it just happens. It can be a hard pill to swallow especially for an event you have spent months training for that extreme endurance event. It can be tough to deal with and no one tells you how to handle it until now.

Social media has become a tool to many uses to document training, share experiences and use as a digital scrapbook of their lives. After a DNF, it can take days or weeks to fully internalize what happened in the race. Avoid rushing to social media and posting about it.

This holds especially true for those extreme events lasting 12, 24 or more hours. Often at the point of a DNF, you are tired and may find yourself saying something you will later regret. In our digital age, even after you delete a post it might come back to haunt you later in life. Keep you initial thoughts to yourself.

If you are in some far off place, social media can be a great place to check-in with friends and family.

Post a note reassuring them you are ok, your race is over, and you will fill in details at a later date. Then get offline, don't feed the DNF dragon.

Look at The Steps Leading Up to the DNF

After some solid rest and a good meal take some time to think about the race or event. Write down the timeline leading up to the DNF. People DNF for all sorts of reasons. If you were pulled from an event or medical reasons, look at how you might have avoided the situation and prepare for it next time. If you missed a time cut-off, look at your training leading up to the event and pacing during the event. Sometimes freak things happen even to the most prepared racer. Write down your feelings, write down what happened, journal about it, just not online, at least not immediately.

Give Yourself Two Weeks

Don't Blame Others or Make Excuses

The easiest thing to do after a DNF is to place blame on others, on the course, on the Race Director, on the rock you tripped over, etc… Don't use some external thing as an excuse. It might have been a contributing factor to the event but ultimately it was you that owns that DNF.

Lastly, don't dwell on it and don't stress. While you may have put a great importance on this event another event will come along in the future you will conquer. Use the experience and grow from it. Find the lesson in it and move forward.

Every athlete at one point or another will experience a failure and most in the endurance world will experience at least one DNF in their life. It often means we are just pushing ourselves harder and harder. In the end, this is how we grow as an athlete.