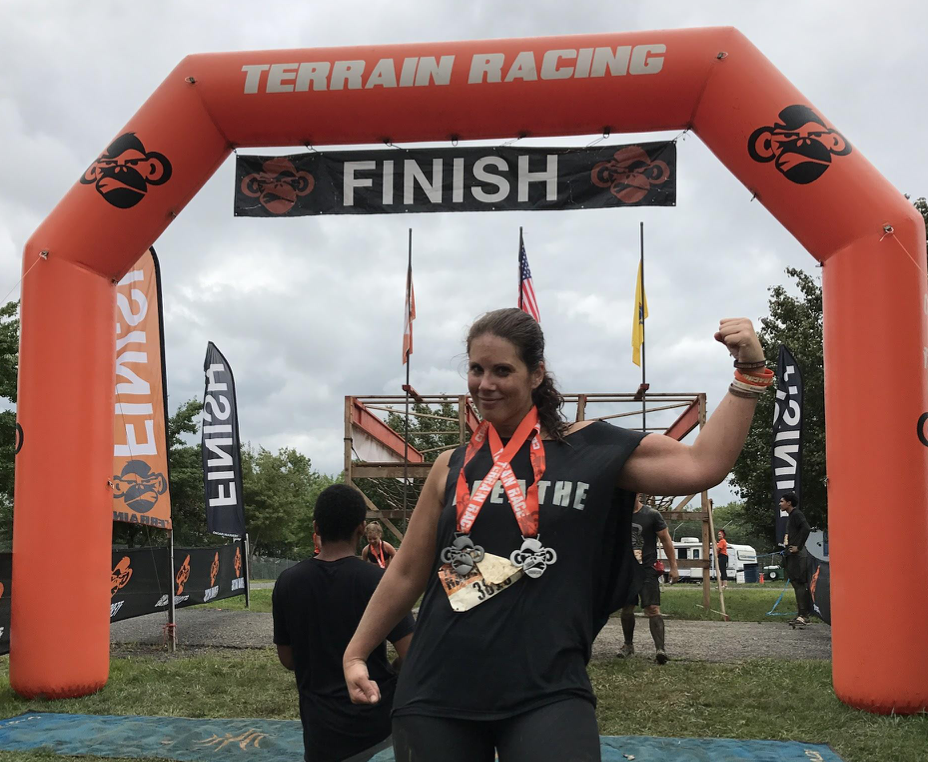 One of the first things I like to do when I get to a race is to look at what saying they use either on finisher shirts or on merchandise they are selling. Then while I am racing I try and see if I could come up with a better one. At Terrain Race the finisher shirts said, “Fear Is The First Obstacle…Conquer It.” Not much on this course scared me and since I did it last year I knew what to expect but I did come up with a better one. “Getting what you paid for is the first obstacle….you are going to fail.”

Let me explain..and try and follow because I am going to be throwing out a lot of numbers. When I signed up there were two options, a 5K and for $5 more a 10K. I decided to sign up for the 10K since last year I did two laps of the 5K anyway and the 10K offered more obstacles and a whole different loop for the rest of the distance. A few weeks later I found out a lot of people on my team paid the extra $15 to run unlimited laps. So naturally, I added that onto my registration.

A few days before the race we all received an email from Terrain Race stating that they were doing away with the 10K and “offering one-course distance between 3-5 miles for everyone”. Wait a minute what?? So now I was paying more and still just running multiple laps of the same course?? And I paid for the 10K PLUS unlimited when really just paying for the unlimited would give me the same experience and I could have saved the $5 I paid for the 10K. AND the email said if you wanted to sign up for the 2 lap option on that day it would cost you $5 (which is what we paid for the 10K when we registered).

So my question was will I get back any of this money because I paid for something that is not happening. Had I just signed up for the 10K without unlimited I would have gotten what I paid for..but I signed up for that AND unlimited when the price of unlimited would have been sufficient? Get it? I know it’s hard to follow but just know that I did email them for clarification on whether we were getting our money back if we paid for both options and nobody answered me. So now that I took care of the mini rant over feeling fleeced by Terrain, let me give them their props. 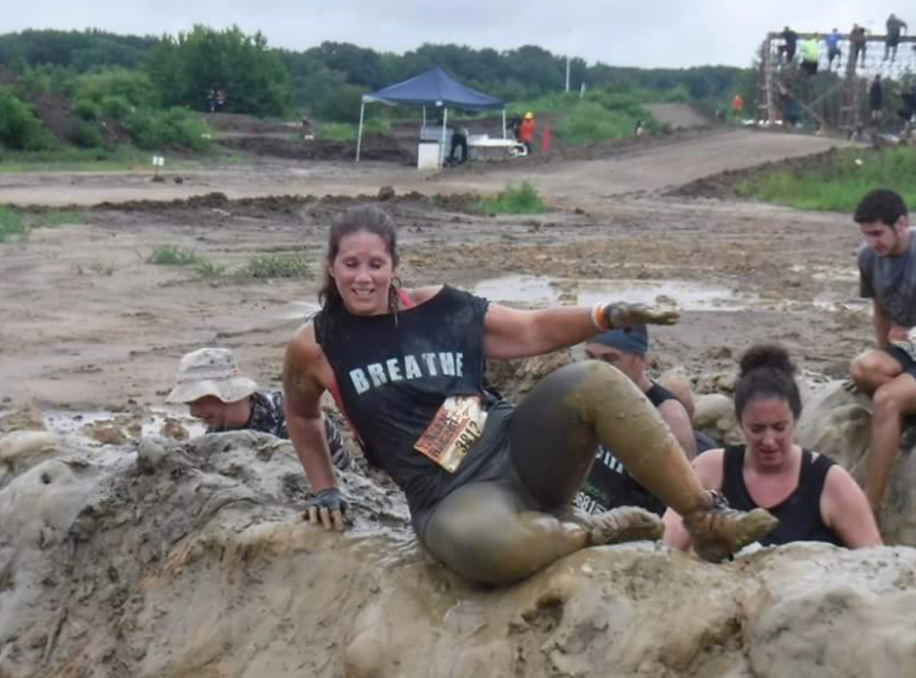 It was held at Raceway Park in Englishtown where many different OCRs are held. Parking was great as always and bag check was free, which was nice to see although I wondered if it was because they had 5 extra dollars from so many people (Ok I’ll stop my whining over that but it still irks me because I will pay any amount for something I enjoy but I do not like to just give money away.) This particular race starts in a pool filled with dirty water that everyone stands around in until it’s GO time. Think of the hot dogs floating around in the dirty water on NYC streets. I was so disappointed to see so many people skip this. My whole team got in, but it was in and out. No marinating in the water. The course was one I have run many times and it’s a nice mix of flat trail runs and some little hills they use for Motocross. Nothing crazy which let’s you enjoy the time with your friends. There was a TON of mud and everyone was playing around in it like little kids. The obstacles were all pretty doable and ranged from monkey bars over another pool of water to a light bucket carry. There was also a rope climb, a few walls and muddy mounds we got to slide around on. 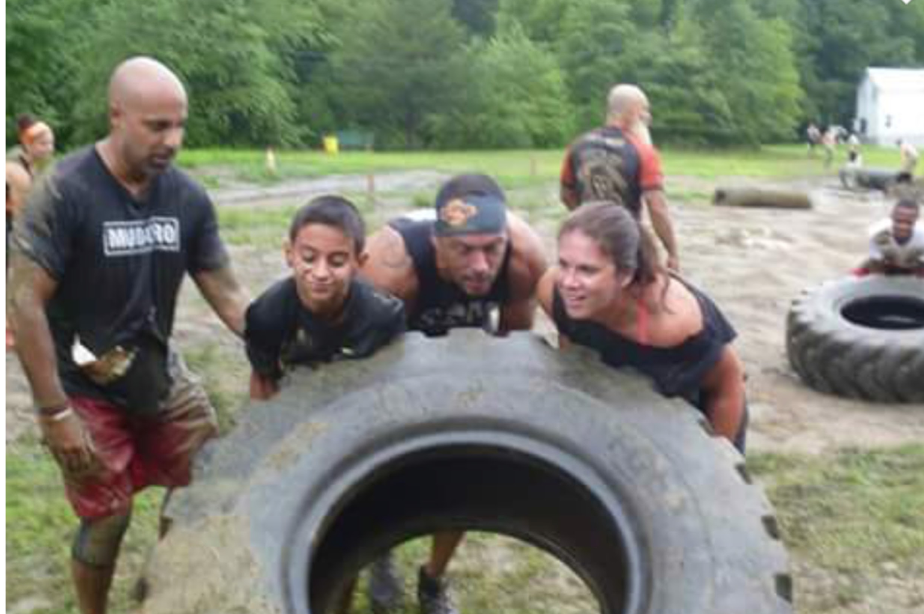 Terrain added two new obstacles I have not seen in any other race I have done. One was what we were calling “cholo” or cheap polo. It consisted of a heavy tire and a big sledgehammer. The object was to hit the tire across a walkway and then back again. I was laughing so hard watching everyone do this because I simply did not understand it. I was later told it was a take on an obstacle during the Crossfit Games. Right after that we had to carry a metal pole on our backs with two heavy swinging tires on it. This sounds easier than it was because the tires were swinging as we were walking. It was a nice change from the usual log carry most races have us do. 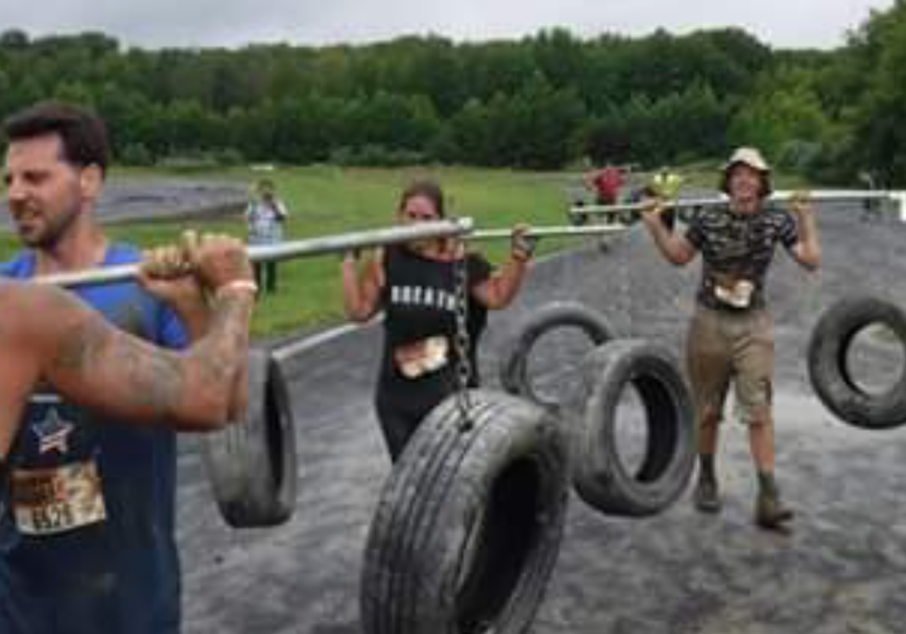 Terrain Race does not have any penalties for skipped or missed obstacles nor is it timed for the open waves. Because of this, the whole course was lighthearted and people were having a great time. My team did do two laps which technically was a 10K but after that, we were done. 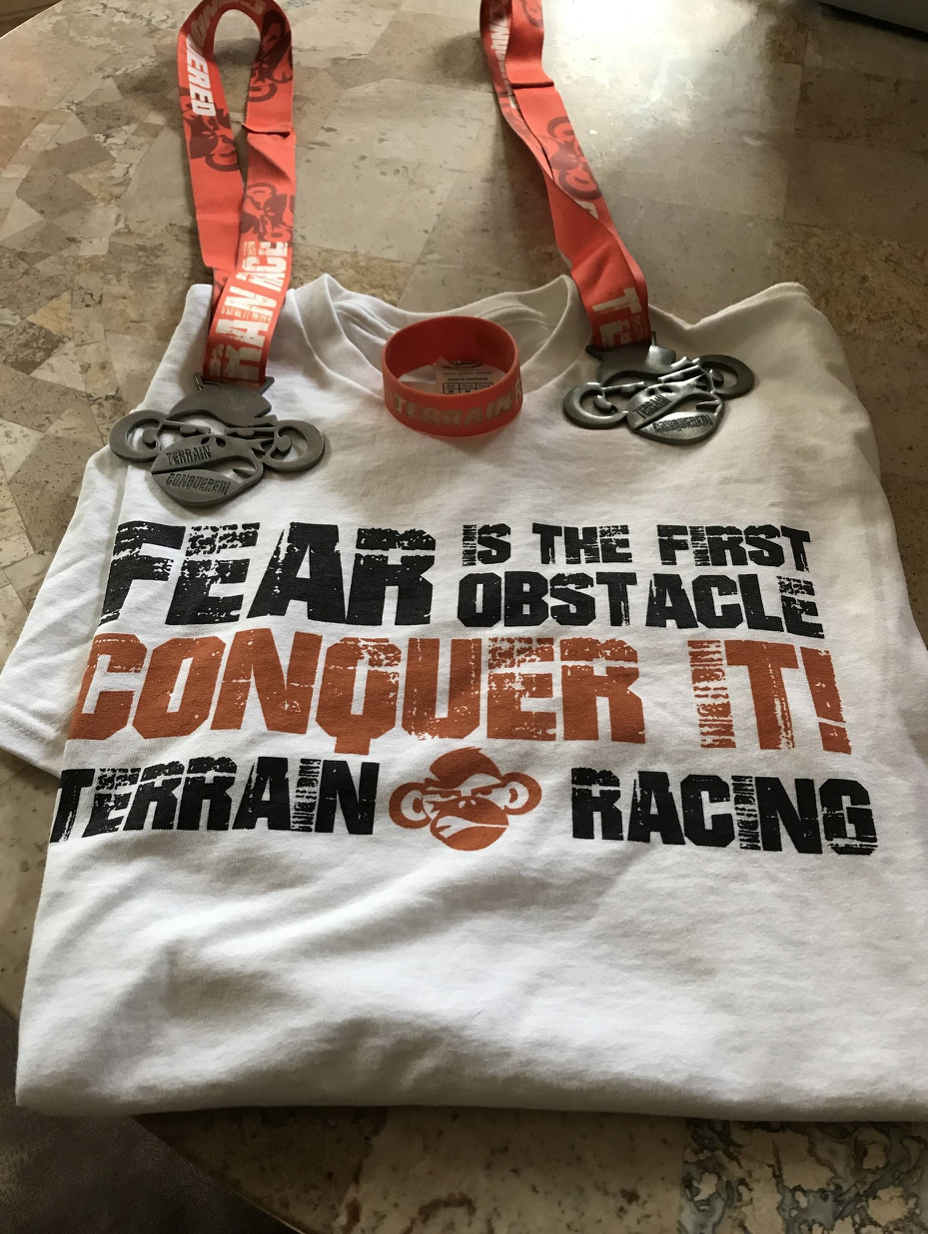 Honestly, I did not feel like doing all the same obstacles again. Had it been a true 10K I may have gone out again and I think many other people felt the same way. The monkey medals we got at the end were cute but I missed the spinning ones from last year.

I know I said I was done complaining but apparently there were pins you got for completing the 10K but nobody ever said anything. A few people I know saw them on a table and asked for them but I did not even know they existed. Another thing I guess I paid for and did not receive.

I know it sounds like I did not enjoy myself but I will probably do this race again next year because it WAS fun; really my only gripes were about the way registration was handled and that my medal is missing a monkey pin.