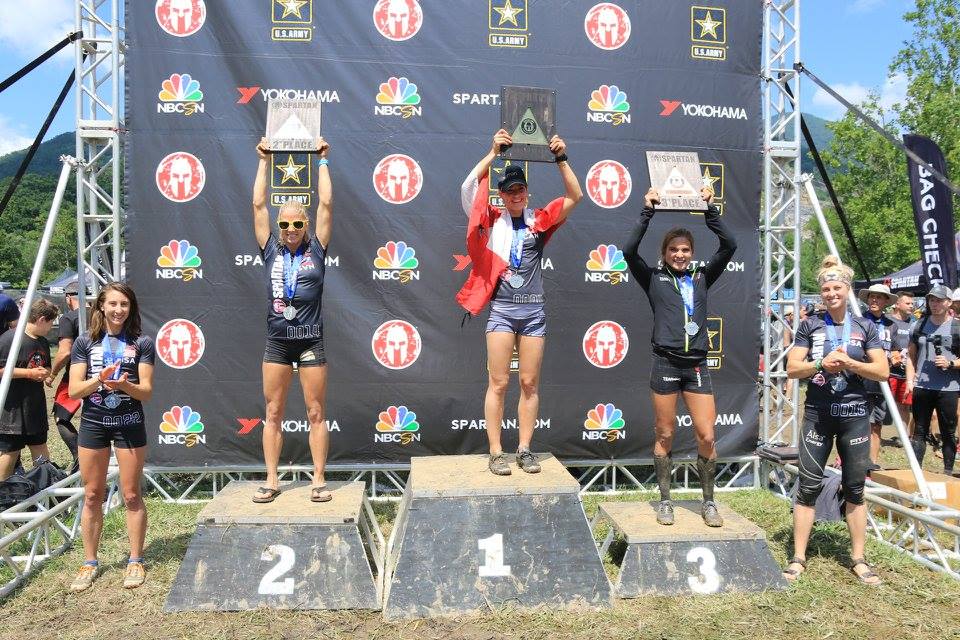 Turns out I’m not the only one who is fed up with Spartan Race when it comes to who’s on first. Last few years, the elite men left the gate first. A short while later, the elite women took off. I watched each of the four championship series races this season and here’s the problem.

By the time of the second or third obstacle, the top elite women caught up to and passed the back of the pack elite men. There’s usually a bottleneck. At Asheville, that happened first at the barbed wire crawl. That’s a tough place to pass somebody under any circumstance. But in this case, the guy graciously got out of the way. By the spear throw and bucket brigade, everyone was together. But not equal.

David Magida, one of the announcers on the live feed, pointed out a subtle issue. The rock pile was significantly lower by the time the women got there. This made it harder for them to fill their buckets. In the meantime, more guys showed up to compete for space, some filling, some dumping their buckets.

That was enough for me to launch a tirade on Facebook. I got plenty of responses. A lot of other people joined in throughout the day. Some started their own posts venting their displeasure with the plight of the women taking second place.

The good news though is that many of the posts also provided constructive suggestions. This is a real issue and many people want to see it resolved. The question is, what is the real issue?

That came up in many forms. Some people think nothing will change because the current model brings in the most money. Others believe the classification of an elite is too loose. Still, others point out the lack of standardization in the sport. Is it any, all, or other? Here are some of the comments in brief. Chime in and perhaps our voices will be heard.

At least one of those voices might make it. David Magida has a “little” pull with Spartan Race. He mentioned this issue again in his own FB post. Maybe a voice that carries the weight of a top elite, the top announcer will do the trick.

Suggestions from the OCR Community

Qualify and apply to be an elite at any/all races.

Our own editor-in-chief Margaret Schlachter said,

“Only one Spartan Race ever women went out first – that was Palmerton 2012. It was cool as the top male and top female crossed the finish line within minutes of each other. Otherwise, you have to go back to when the men and women started together in the elite field.”

“I have also physically moved men out of the way….” She went on to suggest. “…doing a heat of top men and heat of top women based on points to go out first and then the rest of the elite waves could go….”

Spartan needs a separate lane for the top females in Elite saved for them on obstacles.

At this point, another issue came up. The competitive heat. Regardless of the intent of the elite and competitive classes, both have been abused. Many runners use them to beat the open class crowds and especially to beat the afternoon heat on the course. All you have to do is pay the extra cash to join the corral. Attempts were made to mitigate the conversation, but this issue of pay to play is too sore, too raw. Most agree the money model will reign.

But one reader pointed out, “If they hyped the competitive wave as a qualifier then they’ll still get the people trying for it. It would introduce a new level of competition….”

There was a lot of talk about ego. I tend to think that was minimal. The one thing many of us still find in abundance in OCR is the spirit of the community. We’re good people. We give way. We want to see the best achieve the respect and podiums they deserve. We all want to get there in our own ways. The solution has to incorporate that culture while still bringing in the profit.

What do you think? Share in the comments your thoughts.

0shares
Disclaimer: The viewpoints expressed by the authors do not necessarily reflect the opinions, viewpoints and official policies of Mud Run Guide LLC, or their staff. The comments posted on this Website are solely the opinions of the posters.
By OCRMudmaster|2017-08-01T09:57:13-04:00August 2nd, 2017|Op-Ed|2 Comments