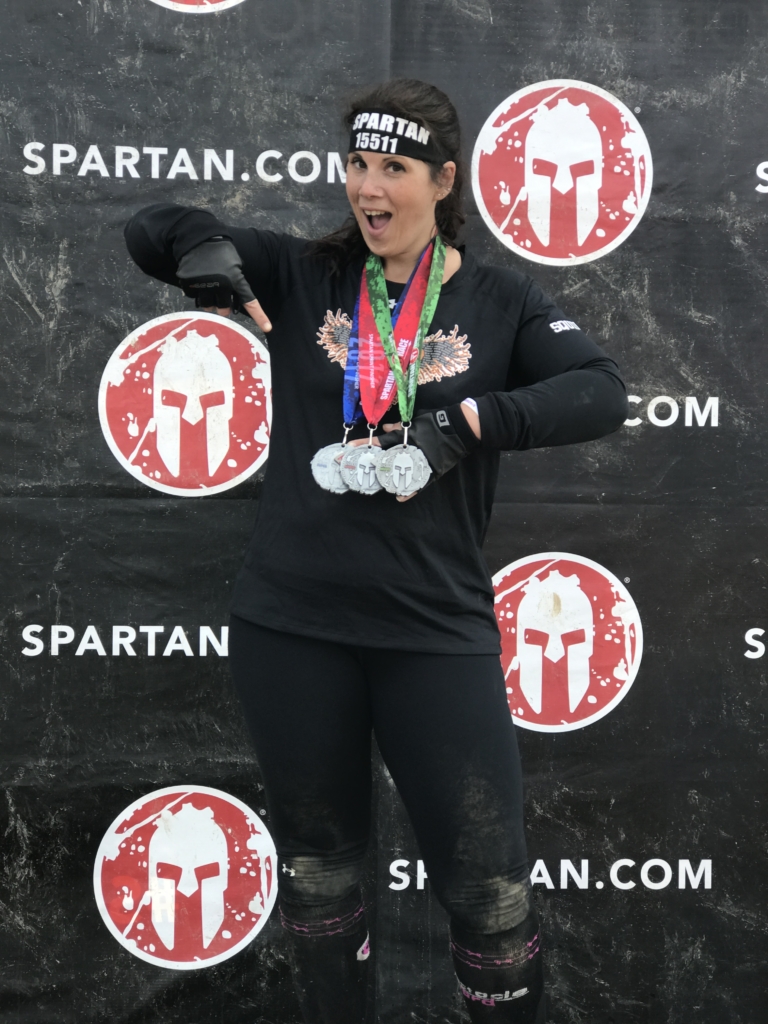 In March I started my 2017 OCR season freezing my butt off at Greek Peak doing a Spartan Race Sprint in 10 degrees with the ground covered in ice and this past weekend I saw it come to an end in Vernon New Jersey at the Spartan Race Super amongst the beautiful changing leaves. If there is one thing  I learned I’ll need to do if I plan on continuing to race (which I do) ..is I may want to consider investing in some climbing gear and incorporate it into my training.  What Spartan Race lacks in obstacle innovation, they definitely make up for in usage of the terrain. Each race this year has gotten progressively steeper, and I think we as Spartans appreciate that!

I have now done two Supers and one Beast here and the first half mile is always straight up a hill. This may be to mess with us because we literally stare at it as we are in the starting corral. Which ahhh yes the starting corral. THE BEST ONE I HAVE BEEN IN THIS YEAR!! I don’t know if it was because it was one of the last races of the season for many or the beautiful weather but it was loud. 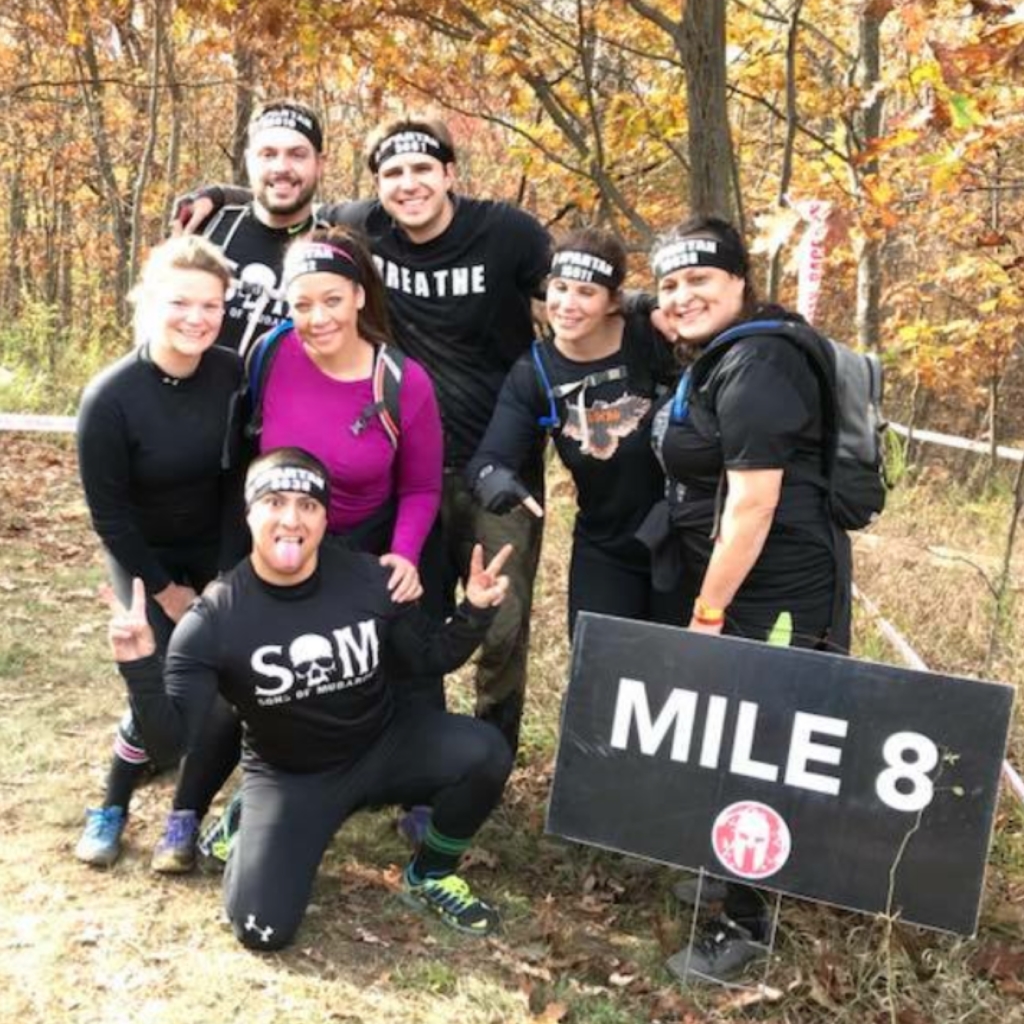 Everyone ARROO’d..everyone yelled, “I AM SPARTAN”, everyone was pumped. It was something I found lacking at the other races I had done this year and this made me smile. The hurdles were our first obstacle and I found them higher than usual, but like always help from other racers was readily available. My heat was at 8:45 which made the third obstacle of the day extra fun (I hope you can hear the sarcasm in my voice) It was about 45 degrees out and we had come to the infamous dunk wall. I was smart and had two shirts on and decided to take the top one off to keep dry took to take the wet one off and replaced it with the dry one. This was probably the smartest thing I have ever done because that water was frigid! I saw women doing it in their sports bras to keep their shirts dry. I heard many people talking about doing their burpees instead of the wall because it was so cold but I figure first of all I can’t do rings and the rig so if there is an obstacle I can definitely do I am going to do it and plus the best pictures always come from here!! 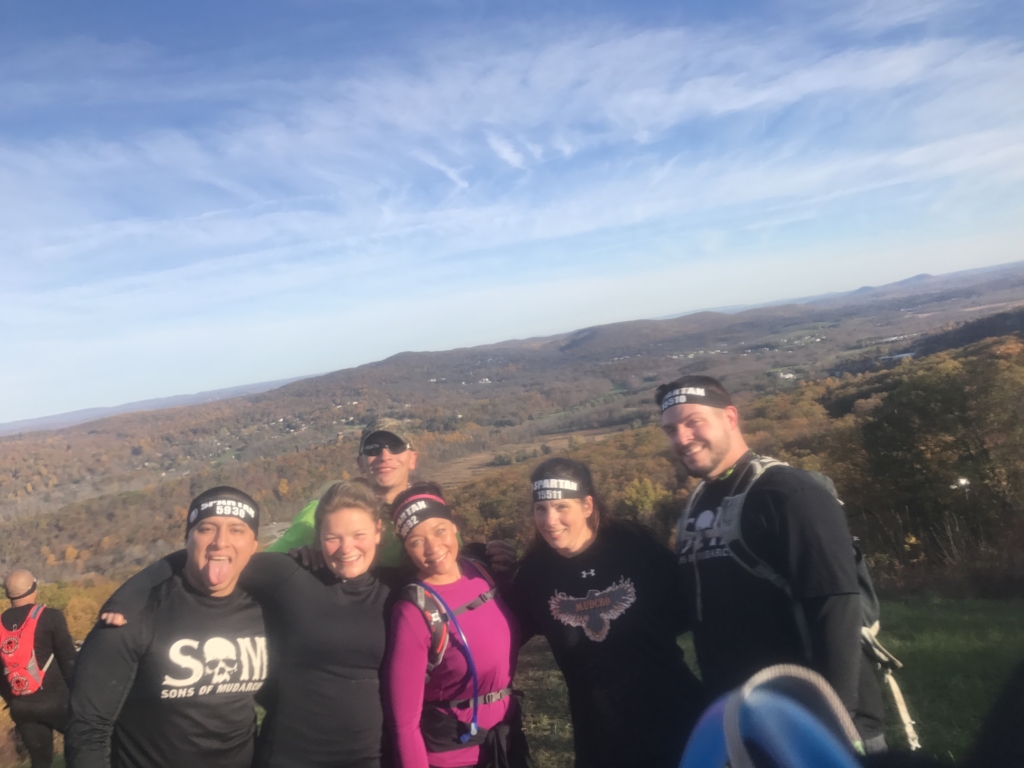 We climbed and climbed and climbed and when we finally got to the top the view was absolutely breathtaking. The leaves were colorful, the sky was blue and I was so glad the other six people I was with wanted to stop for a minute and admire it. We stopped to take a few pictures and then down we went. Some areas were so steep I saw people riding down the mountain on their bottoms. I considered it but the thought of getting a branch stuck somewhere completely uncomfortable made me decide just to go down carefully. I even saw one guy run past us wearing some sort of flip-flop/sandal hybrid and I couldn’t wrap my head around how he was doing it. I was wearing my Salomon OCR sneakers and even I tripped on a rock and went down hard on my shin. 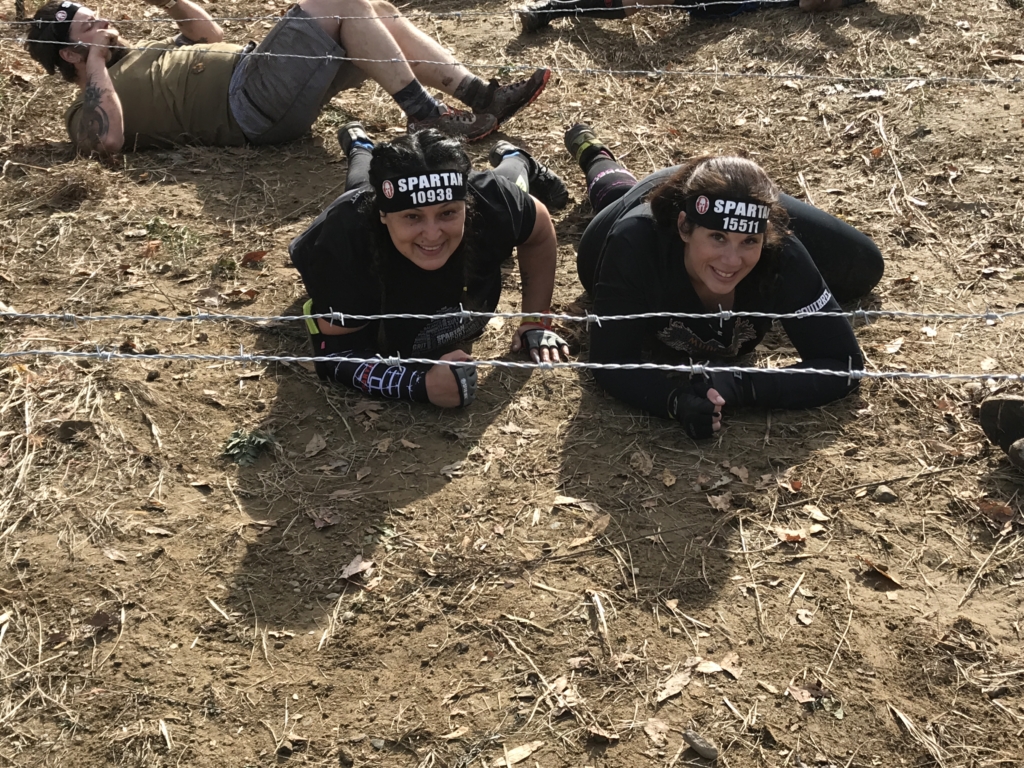 There was no tyrolean traverse at this race and I heard it is because Spartan will now only have this obstacle at Beasts. We also didn’t have to cross the waist deep creek we usually have to at this venue. As a matter of fact, the only water and mud we encountered was rolling mud followed by the dunk wall. That meant we really didn’t even have to change to drive home if we didn’t want to. Lately, I like to do the men’s herc hoist and this time I did it twice. One thing I noticed was that both bags definitely seemed to be slightly different weights. I don’t know what it was but the second one I did seemed heavier than the first. The sandbags were also all different weights. The first one I picked up was so light I switched it for a different one because it felt like cheating to carry such a light one. I’d like to think they do this one purpose to give people options but I think it’s just a matter of the bags getting holes in them and losing some of their sand. 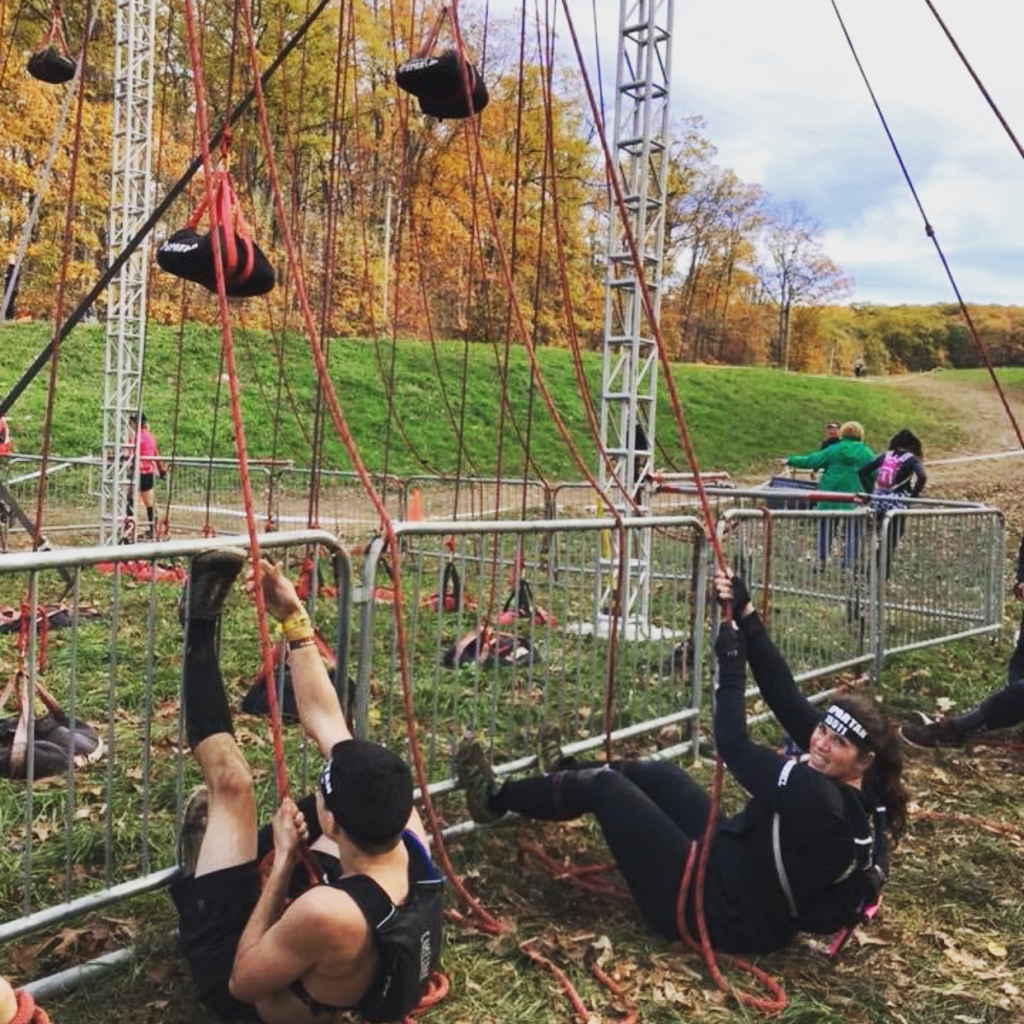 I’ve noticed Spartan is varying some aspects of the obstacles from race to race. I have seen twister with grips and without (this one was without) and I have seen the slip wall with full ropes and with shorter ones (this race had shorter ones which meant you had to get a running head start to run up it a bit and grab a rope). As I’ve mentioned before I can’t yet to do monkey bars and rings but I always at least like to try. Sometimes they are so high up though that I can’t even reach. There was one box to stand on at Twister that was built up higher than the others for us shorter people. I really appreciated that because even though I failed immediately I was able to give it a shot.

The obstacles were pretty well spaced out and they gave us some beautiful trail running which made for a hard but not terribly uncomfortable race. Although I did see more people cramping up than I ever have before and I smelled more mustard than at a baseball game! Seeing people stop to make sure those racers was ok reminded me why I do this and made me wish for a quick offseason. For me, this race capped off an amazing year of racing and it garnered me the final piece to my first Trifecta ever. I couldn’t think of a more beautiful venue to close out my 2017 racing season. 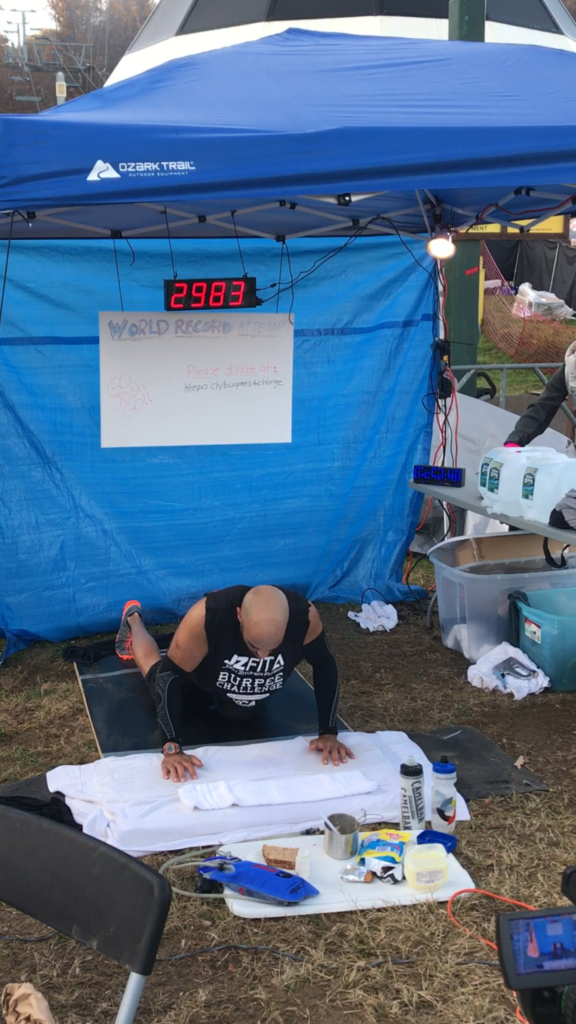 While we were racing Josh Zitomer was trying to beat the 12-hour burpee World Record. He started at midnight and I was able to watch him for a little bit before I took off. He was 8 hours into his quest and he looked tired but not defeated. In the end, he did  4650 burpees in 12 hours which clinched the record for him. It really made the 120 I did look like nothing.

He did that right in the middle of the festival area which seemed to be really short on sponsors. I saw Devils Backbone Brewing Company, BBQ Guru, GT’s Kombucha and Chameleon Cold brew represented. This surprised me because these didn’t seem like things really geared towards the “racing life”. One nice surprise was being handed a cold Organic Fuel at the finish line as these had been missing from Spartan races for a while.

Before I sign off with my race recaps for the year I want to mention one thing that made me proud and one thing that made me question whether or not adults were at this race. First the proud moment. This was the cleanest course I have ever been on. There was no trash littering the ground and unfortunately during these longer races we have been accustomed to stepping over empty GU packets and other nutritional debris. This was not the case here and for that, I give us all a pat on the back.

Now for the bad. The port-o-potties. Some of them had human waste smeared on the seats and on the hand sanitizers. Come on people…I get that we are nervous and have “race stomach” but that doesn’t mean we forget how to use a bathroom. And this was at 8 in the morning when things were just getting underway! Let’s try and respect our fellow racers and the venues and remember our manners. See you on the course in 2018……..