I'll admit it: I had heard from a friend that Epic Series was an easy beginner race, so I was prepared to deal with an unorganized chaotic mess, as often times the new or beginner race companies are still learning the tricks of the trade. But as I embarked on my very first Epic Series Race this past Saturday, I was pleased to see that I was wrong. Epic Race was truly EPIC in deliverance.

If you are not familiar with the series, EPIC is an oddity in the sense that it is not a “mud run” by definition, but rather an Obstacle Course Race solely. It combines functional fitness and weightlifting with minimal amounts of running and is performed over the pavement. The course is short in distance but makes up for it in obstacle density. I'd guess that in total, there were no more than two miles of active running combined.

Epic Series has three different levels and two different courses. The competitive and beginner course are exactly the same, the only difference being that the competitive runners start earlier in the morning and their waves are clock timed and judged. Competitive runners are eligible for prizes and then have the option to add on the Elite Endurance course or the Elite Strength course after their initial Epic Race.  If an athlete is choosing to compete in the Elite Endurance course, they will have the exact same obstacles (or WOD, in this case) as their Strength counterparts, only less weight, and more reps. The signature obstacle at the start of the course is a truck pull. Yes, an actual vroom vroom kind of truck. The Elite athletes must pull it 100 meters in 90 seconds or less, or have a penalty added on to their time. Sound Epic enough for you? 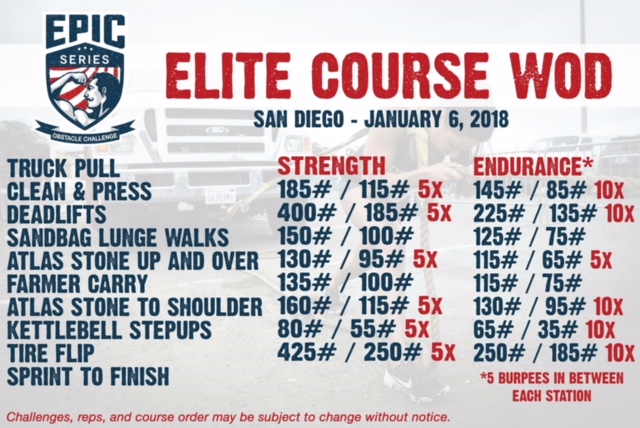 I raced the course competitively and I had already gotten more than I bargained for. I decided I was not ready to add on the extras, but I watched as others attempted to tackle the lifts and pulls with perspiration and tears. It was- dare I say it again- pretty epic. My attempts in the original Epic Course were both comical and enlightening. As I was ushered into my start corral, I was given a giant flag to hold and told I must carry it during my quarter mile start lap. I've enclosed a picture of my goofy self-holding this darn thing and getting ready for take off. 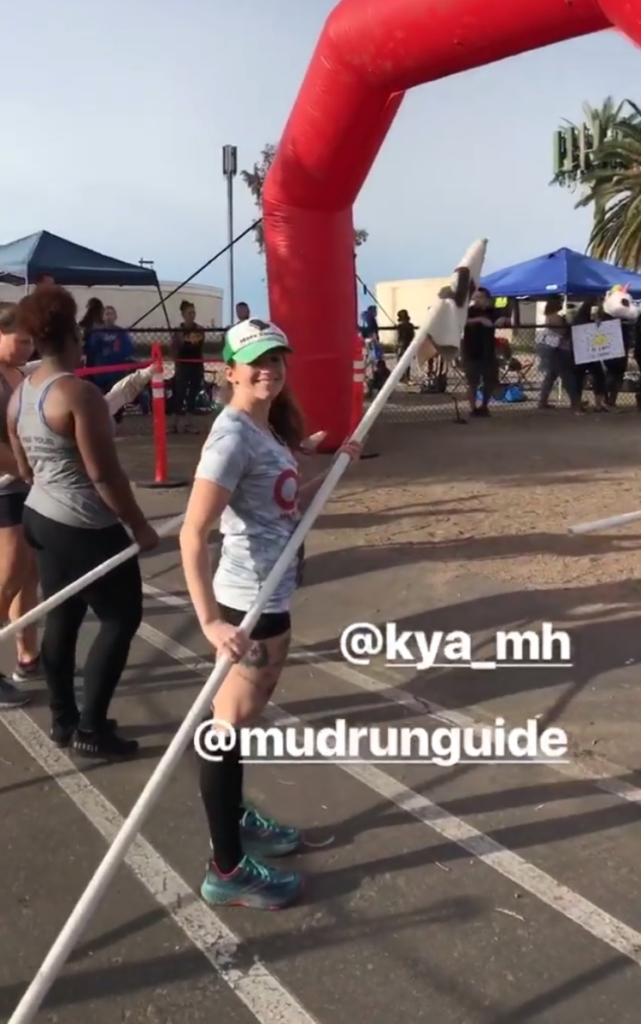 Overcome and Run Media was kind enough to capture this image during their Instagram Takeover of the event.

The course was marked very clearly with numbers on each station directing athletes on where to tread next. While a good deal of the course had the familiar standard obstacles, what struck me as interesting was how closely they were able to incorporate Crossfit into the mix. Our first station following the flag run was a set of 10 overhead squats with a judge calling out your reps, then on to my nemesis: the atlas stone up and overs. I'm a tiny person, weighing in at about a buck twenty and barely hitting five feet tall. The atlas stone was torture for me. I don't have guns of steel and I have the legs and mindset of a Corgi dog (please google it) so as I managed ten of these bad boys, I wanted to faint. I will point out that the ideal way of conquering this obstacle is to get your body into a low squat, clean the stone up and over your chest, and then roll it behind your shoulder. Repeat ten times, five over each shoulder, then move on.

Another unique characteristic of Epic Series is that they have a plank station and wall sit obstacle. I approached this station and was instructed to grab an hourglass timer and flip it over once I was ready to start my two-minute plank. Yay, abs. I chatted with the volunteers and staff while they eagerly awaited new participants to be briefed on the rules and I mentioned that I thought the hourglass timer was a particularly brilliant move. They agreed that it simplified the accountability of the volunteers and thereby made it easier to track if a competitor is attempting to cut their time early. We all like to pretend that cheating is not an issue in Obstacle Course Racing, but sadly that's not always the case. Epic Race won some major points in my book by creating a way to time every athlete accurately and easily. Nicely done. 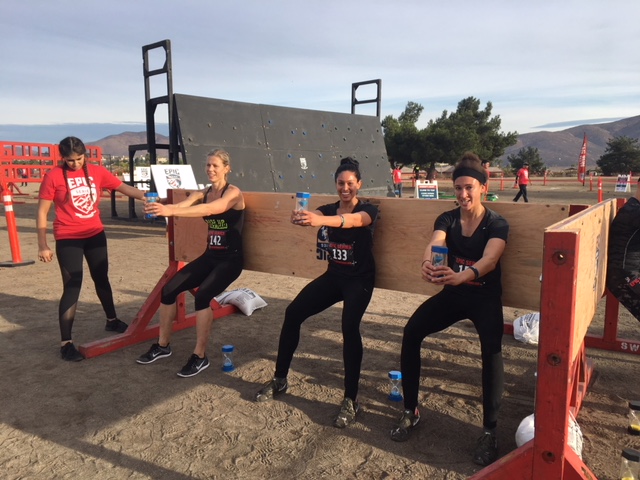 The first wave of competitive women starting their timers for the two minute wall sit.

After some wall climbs, rope climbs, a keg hoist (frat party later, anybody?) I was ready to move on to something new. And by new, I suppose I mean ancient. One of our final obstacles was essentially a scene out of a Robin Hood movie: we had to pick up a bow and arrow and hit a target. We had unlimited tries, and it probably would've taken me closer to unlimited and a half had I not had some coaching from a volunteer who saw me struggling. I'm not exaggerating the struggle. The bow was upside down and I couldn't figure out how to hook the arrow. I wish I were kidding. Seven tries and fifteen minutes later, I was nearly done with the course and at the final obstacle. The Keg Lap. Once again, I will mention that I am a puny little girl. The weight of the filled keg was about 75 lbs and it was the most awkward and painful carry I've ever been involved in, INCLUDING any Spartan Race bucket. We were told to roll the kegs onto our backs and then grab the handles and complete the 200-meter lap. My heart said yes, but my body said no. I looked like an underdeveloped snail carrying a lobsters shell on its neck and I might have also vocalized that I was being crushed to my death and wanted to die. Well, I didn't die, and I finished the lap and noticed that I was ten yards from the finish line. It was over! I had finished it! All shall rejoice! I grabbed my medal, my finisher shirt and hugged my friends for cheering me on. What a day! 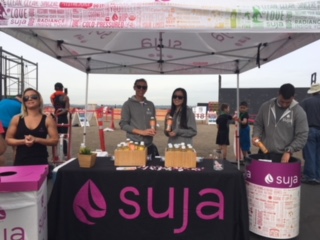 If it wasn't enough for the course to be insanely epic, the Vendors and Sponsors were top notch. There were plenty of food options if you wanted to purchase a meal or some drinks. If you were more of a “freebie enthusiast” (I mean after all, you DID just run an Epic Race, you earned it!) Suja Juice Company was standing by, handing out coupons and samples of their delicious and refreshing drinks. And while I try not to play favorites in the sponsor game, I have to admit that I was beyond overjoyed when I saw the Dr. Bronners truck was parked and ready to shower us with magic peppermint foam. Overall, this event was a win. As a highly opinionated woman, it is rare that I am left in a position with nothing to complain about, but Epic put me in a great mood, maintained an efficient course, engages in business with like-minded sponsors, handed out thick high-quality medals and provided plentiful entertainment for us all. There is really not much more that can be said, besides thanks for the fitness, Epic Race Series!