Making Obstacle Course Racing (OCR) financially feasible is no easy task. It takes an enormous amount of money just to open the gates for a major race. To cover the high fixed costs of putting on an event, race promoters look to attract more participants to each venue. But while attracting new racers to OCR is necessary for growth, both as a sport and for the individual promoter, they also face the continuing challenge of creating an event that challenges the more experienced or elite athletes while not discouraging the amateurs or first-timers. What satisfies the needs of a first-time racer would not necessarily satisfy the veteran racer. The challenge then for the race promoters is how to do both.

First. Not All Racers Want the Same Course Distance.

Some promoters, including Tough Mudder, Spartan, and even Savage Race, are attempting to meet the needs of these racers by offering multiple distances on the same course…sometimes on the same day…with varying degrees of success. Spartan has typically taken the ‘route’ of offering a Beast (their longer distance race) or a Super (middle distance) on one day, then the shorter Sprint on the other. This seems to be the safest path to eliminating the virtually unavoidable confusion and complaints from having multiple race distances on the same course at the same time. The promoters just don’t have the manpower, whether paid or volunteers, to properly man all the points where courses cross. Leading at times to racers missing an entire leg of the course (and yes, I believe this happened to me…more than once). 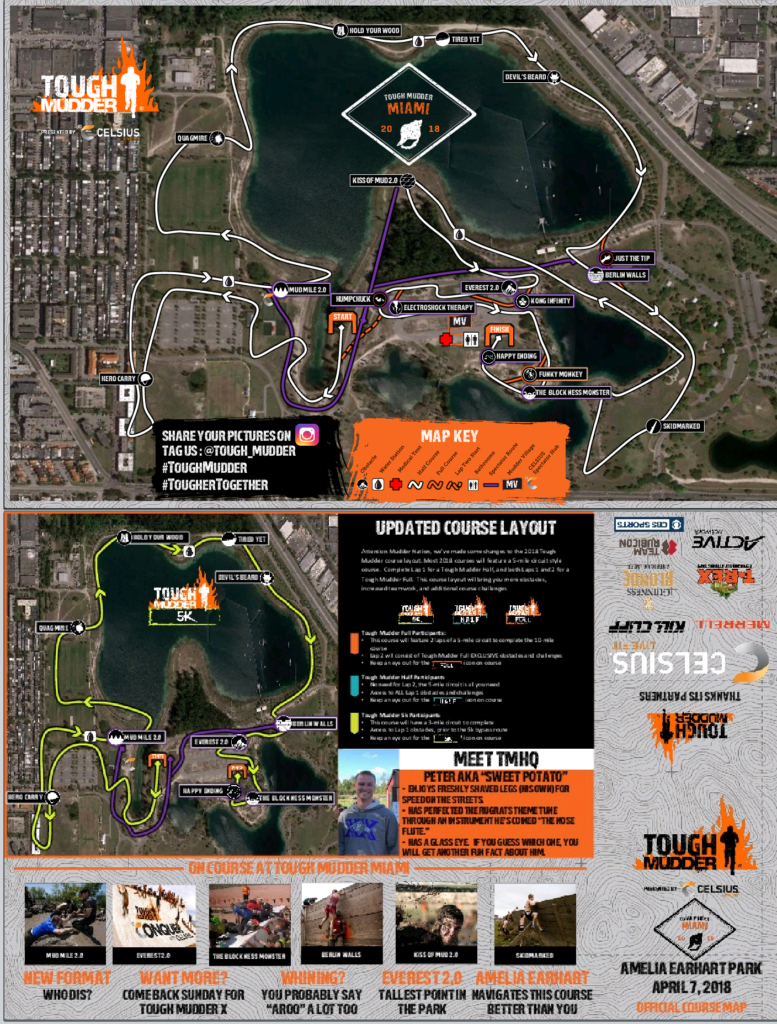 Promoters have also attempted…again with varying degrees of success….to accommodate different skill levels on the same course. The need to satisfy the desire of veteran and elite athletes for tougher courses continues to pressure promoters to increase the difficulty while not deterring the casual or beginning racers. A similar concept to multiple distances has been used to accomplish this by offering course ‘loops’ which provide more difficult obstacles for advances racers. Of course, this leads to the same issues of confusion for all racers when directions aren’t clear or signs have fallen down.

An alternative is to offer separate lanes on obstacles with different levels of difficulty. This option hasn’t been attempted often and comes with its own drawbacks…like how many lanes to offer at each level to avoid bottlenecks for both classes or racers. All the alternatives though have led to complaints, confusion, and dissatisfaction from racers at all levels. So far, there’s been no magic pill to solve this.

On one hand, you have promoters trying to keep the course difficulty manageable for the beginner. On the other end of the spectrum are races trying to live up to the old “You May Die” reputation of the original Spartan races. Unfortunately, some races today have become too difficult even for the elites. Most recently this occurred at the Spartan European Championship, which was widely criticized as being all but impossible to complete. Becoming, not so much an obstacle race, but a Ninja Warrior course with its multitude of rigs (much more to come on that topic!). And this is something OCR, and particularly Spartan has struggled with from day one. How to push past their limits without woefully exceeding them. It’s one thing to strive to overcome, quite another to be physically and psychologically defeated…not the feeling you’d be shooting for if you expect to have a repeat customer.

Admittedly though, I am not your typical repeat customer. My own experience began with Spartan in 2011. There were no Mud Run Guide race reviews and about the only one writing about the sport was Margaret Schlachter with Dirt in Your Skirt which started in spring 2011. But the Spartan website claimed that 99% of the people finished. I was 53 at the time. Finishing was important, but surviving was paramount. But the pictures showed a 40’ crawl with barbed wire 2’ off the ground. I could do that…I thought. Afterwards, battered, bruised and bleeding, I called them out on Facebook. To their credit (and very possibly from Joe De Sena himself) I was told that the figure was more like 60%…but if they had told the truth, people wouldn’t come! And I’m sure they were right.

Of course, I did go…and finish somehow. Then went again…and again. But even a challenging venue like the Spartan at Tuxedo, NY can get old. After three years of participating in this event, I almost didn’t go in 2014. And therein lies yet another challenge. Promoters must continue to find new ways to bring back those veterans year after year, again, without turning off the beginners…or busting the budget.

As in all things though, nothing moves forward without occasional steps backward. Race promoters have taken missteps in trying to maneuver this maze throughout the short history of OCR. Some were embarrassing to the promoters…some were fatal. Others, like the recent finish controversy at the European Championship, show that even Spartan isn’t immune to miscues. And who remembers BattleFrog [admittedly one of my personal favorites and the originators of the best OCR TV I’ve seen…so far]. At one point, just when they had come up with a multi-lap option with less intense lanes for the average racer, BattleFrog decided to implement a policy to yank those very racers from the course if they failed even a single obstacle.

That went over well…partly due to the OCR community outpouring from an article in MRG. There was even some unnecessary controversy at a recent Spartan Hurricane Heat where a team participating with disabled athletes was apparently denied their finisher medals for not meeting time cutoffs. Of all the ways that races are attempting to attract new racers, the most important lesson in all of this may be to respect what your current clientele came for…or they may not come back at all. And lest we forget, an unhappy participant is ten times more likely to shout out to the social networking heavens…and to be ten times as loud.

Of course, OCR has always meant different things to people. Sometimes it’s the urge to compete, to prove something. Whether to yourself or to others. Sometimes it’s the challenge to do something that you thought was ‘impossible’. In the end though, for most of us, it’s about having fun and very often today, about sharing that enjoyment with friends and family. The promoters who focus on that are likely to succeed…and clearly, some are doing exactly that.

Have you run a race offering multiple distances on the same course…did you have problems with directions? Are you finding races too hard….too easy? What would you want to see improved? Let us know!

With the spectacular growth of new physically challenging activities that have sprouted up this last decade, we’re now seeing the overlapping of OCR, Crossfit and even Ninja style competitions. That’s coming up in the next article as we look at what that may mean for OCR.

8shares
Disclaimer: The viewpoints expressed by the authors do not necessarily reflect the opinions, viewpoints and official policies of Mud Run Guide LLC, or their staff. The comments posted on this Website are solely the opinions of the posters.
By John W|2018-11-06T10:35:51-05:00September 20th, 2018|Op-Ed|2 Comments