OCR Community Must Lead the Fight Against Trolls

In a sport marked by overwhelming positivity, there is a disturbing growing trend toward negativity and destruction on OCR social media outlets. I am frustrated by this shift, and the issue hit home when trolls attacked a teammate and all-around badass of a lady recently.

As we may [or may not] know, upon signing up for a social media account we willingly agree that the things we post on are subject to repost without context. In this case, the crew at Tough Mudder HQ reposted a photo on their Facebook page with the innocent and positive message of “Grip Strength Goals.” The picture illustrated a remarkable testament to hard work, as the subject of the photo demonstrated superior grip strength and core stability. The post originated as a positive message of power from Tough Mudder Headquarters, got ugly when follower comments degraded from inspiration to bitter resentment and name calling. It began with comments claiming the photo had been altered. Criticism soon grew hateful when she was body shamed for the picture.

Comments like these break the very heart of the sport that is marked by overwhelming positivity and support. 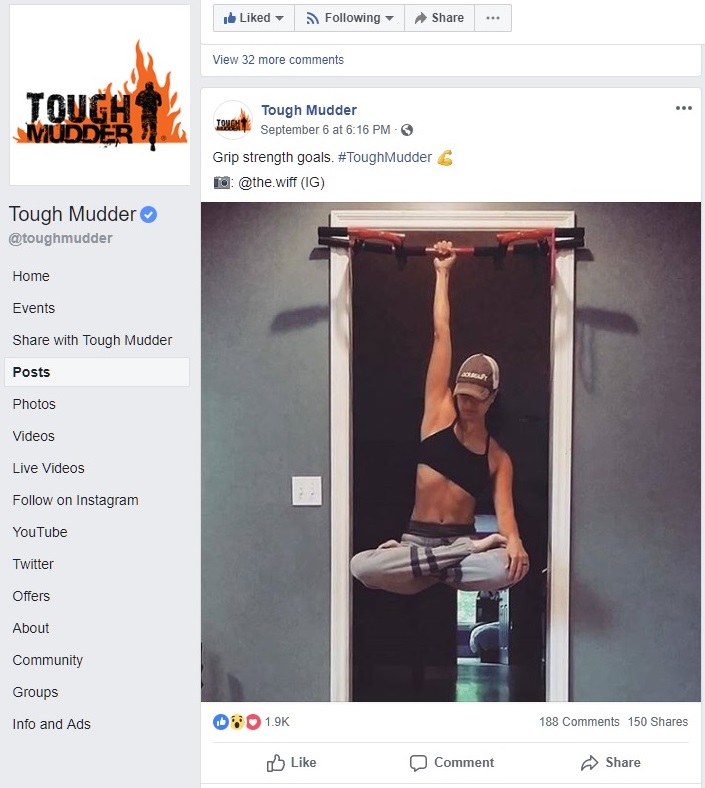 The girl is a serious badass. Follow @the.wiff on IG

Shortly after things turned negative, several teammates, friends, and members of the OCR community came to the woman’s defense. I wanted to give this athlete a name and voice on the issue, so I reached out to the subject, Michele Gorham, for comments on the issue. Here’s what she said—

“I think the most fascinating thing for me that transpired from TM’s Facebook post is that I had no idea how wide my circle is. Within an hour of letting my Social Misfits co-founder, Nick Vitale, know that dozens of negative comments were left about me/my photo on the TM post, there were dozens of positive rebuttals. Within the day there were hundreds. Even TM themselves reached out to me privately. It’s a very overwhelming feeling to receive such support.”

And just because this is the kind of person she is, Michele responded to the skeptics and trolls, posting a current video performing the one-handed hanging lotus pose that inspired the original—foot in a medical boot and all. Though she’s known to sport a significantly different hand gesture to photographers on course, she opted to throw the haters a solid thumbs up. (Charity, I’m officially nominating Michele for your next Badass Women of OCR feature!) 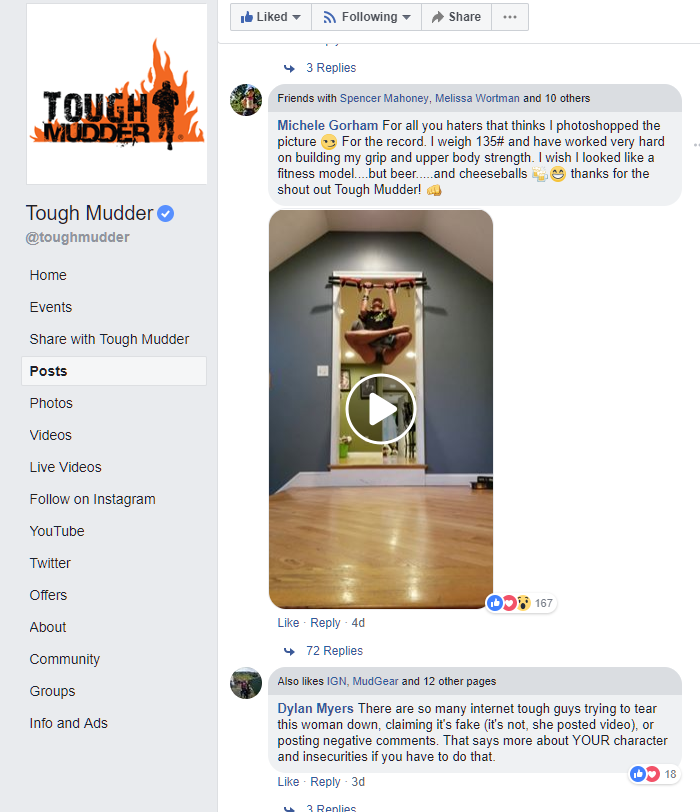 While ultimately negativity in this situation was shut down by amassing positive and supportive comments, it still illustrates how unwarranted destructive remarks are infiltrating our world of rainbows and mud. As Michele put it in our conversation, and I wholeheartedly agree, it just takes one person to create an adverse snowball effect that gives rise to other trolls. Why defer to a destructive cheap shot?

Let’s consider this isolated situation and what it means to OCR as a whole. I discussed the topic with Michele and other teammates, and I found that all our discussions hovered around a central theme: what happens to those competitors—or potential competitors hesitant to give OCR a try–without an existing support system like the one that came to Michele’s defense?

What happens when our community becomes the greatest barrier to entry?

The accessibility of this sport to all abilities and levels of fitness combined with the supportive community is precisely what makes OCR so unique. After all, how many of us claim our first race as a life-changing experience? I certainly can. Not only did my exercise routine transform into meaningful training, at 30-years-old I finally found “my thing.” Two years later, I’m an ACSM certified personal trainer, strength and conditioning coach, undergraduate in the field of exercise science and OCR competitor; I know this sport has the greatest chance at making an impact in reversing America’s obesity epidemic by encouraging fun (and functional) physical activity. Juxtapose this with the increase of the negativity along with a recent shift in media tone to sensationalism, I’m frustrated—and you should be, too. If the OCR community turns hostile that unique accessibility is lost. We stand no chance of growing, let alone legitimizing, the sport if our community and its leaders turn to cheap shots and malicious comments just to get a rise out of strangers on social media.

Shutting down the trolls starts with each one of you. Bullying is a real challenge we now face and must tackle as a unified community. We cannot allow overt nastiness and negativity to pervade our little slice of optimism that we devote countless precious hours. I encourage every racer I meet to join a supportive community, be it a local running club or a social media-based club like Team Social Misfits.

Remember that OCR is something we willingly do for fun. We are proud weirdos, warriors, and oddballs that delight together in trudging through mud, ripping our hands to pieces, and celebrating clusters of bruises over a lukewarm brew. Let’s lift each other up. Tear down barriers, not each other.

85shares
Disclaimer: The viewpoints expressed by the authors do not necessarily reflect the opinions, viewpoints and official policies of Mud Run Guide LLC, or their staff. The comments posted on this Website are solely the opinions of the posters.
By Hillary J. Greene|2018-09-14T10:30:57-04:00September 14th, 2018|Op-Ed|16 Comments