I headed to Neal Farms approximately 30 minutes east of music city for this year’s Nashville Tough Mudder (TM). Saturday marked my first TM Half event, thus earning the title of Repeat Offender x3. While this event didn’t live up to my last experience in Nashville, which was none other than the beta-test 5K at the Tennessee Titans football stadium in 2017, I did enjoy most of my day on the farm. 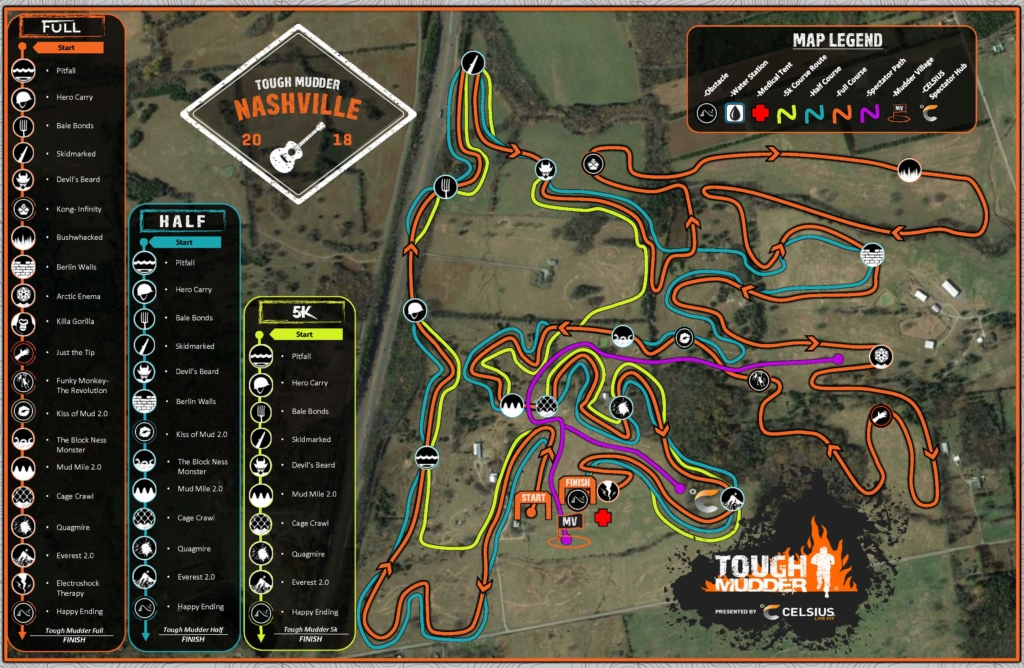 Hurry Up and Wait

Upon arrival, I was pleased to see parking was a reasonable distance from the festival, though I was less than thrilled as I crept at a turtle’s speed in pursuit of my destination. Still, the field was reasonable for vehicles of all styles, my low-riding Mazda hatchback included. I joined the masses of eager racers power walking toward registration looking to make up lost time. Unfortunately, our efforts were lost as the registration process took nearly an hour regardless of current registration status. Even though I arrived at registration a full two hours prior to my scheduled heat, my hopes of performing my MRG social media duties and jumping into an earlier (read: less stifling hot) dwindled. Even in the dominant mid-morning sun and steadily increasing temperatures, racers remained largely positive and excited. Thus is what I have come to expect from many a [Tough] Mudder.

No race brand quite nails the festival quite like Tough Mudder. The sponsor brands were all there either handing out snacks or swag. Spectators were already gathering in groups to watch the competitive racers expertly navigate Happy Ending and the early waves tackle Electroshock Therapy. I, along with my fellow spectators, got a big kick out of the trials at Electroshock. And there were several other activities from a remixed salmon ladder challenge to axe throwing to boot. It seemed despite the long lines and heat, the festival kept racers in good spirits. 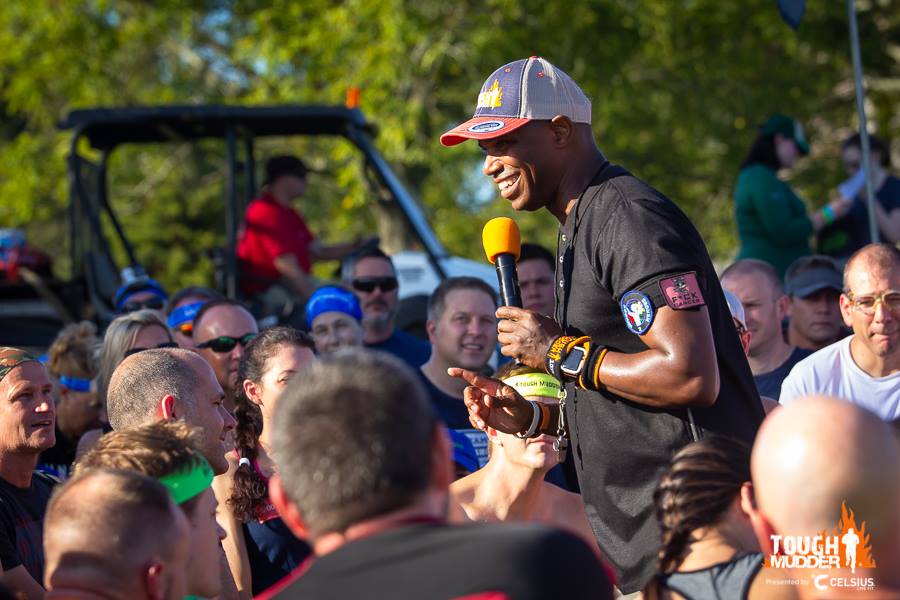 The one. The only.

Tackling [Half] the Course

Another thing TM does better than any other brand is the promotion of unity amongst all racers. The 5K, Half, and Full Mudders corralled together for an exceptional bit of motivation, care of none other than the legendary TM MC Sean Corvelle, before hitting the course. Whereas it felt like it took longer than necessary to reach the first obstacle, given the gigantic wave of racers this did help prevent immediate bunching at the first obstacle. Spacing from that point on was adequate to break up the run—which was surprisingly rocky and technical at points–but some of the signatures set pieces like Mud Mile and Everest 2.0 experienced long waits.

Having run a full TM prior to this event, I knew that I would likely miss out on some of my favorite obstacles. Whereas I did expect to be “treated” to a solid amount of mud, I did not expect for the mud to dominate the Half course. I expected to see a better mix of the large innovative obstacles I’ve grown to look forward to with TM. As a huge fan of grip-based obstacles, I was very disappointed when all three (Kong-Infinity, Just the Tip, and Funky Monkey) were all Full course exclusives. That said, many of the landmarks such as Berlin Walls, Block Ness, and Everest did make it into the Half which mostly sated my TM appetite.

*Full disclosure—I did try out Kong Infinity when I mistakenly departed for the full course following a water and bathroom break; I sure am glad I tackled both Kong OG and Kong Infinity, as both were my favorites of the day! Also, please do not take my trek off the intended path as a sign of disorganization. Paths were very well marked, which was an exceptional feat given that the three events intertwined in many spots. Routing finishers to pick up their respective headbands and finisher shirts for the Nashville event ran smoothly. What didn’t shake out quite as well as collecting the Repeat Offender swag. I had almost completely forgotten about it until my curiosity lead me to the tri-colored headbands that were separated from the others. In this inaugural year of this award, to earn Repeat Offender status, competitors must run two or three different Challenge Series event formats (full, half, 5K) within two consecutive seasons earn 2X or 3X Repeat Offender status; to qualify next year you must complete in all events in the same calendar year. Whereas I was initially disappointed that I had to downgrade my original Full to Half due to a last minute transfer, earning Repeat Offender made it worthwhile. That said, I had to literally run around the festival to seek approval from a few folks before collecting since my name did not appear on “the list.” It seems not everyone was on the same page on award eligibility then the messy transfer from one series to the next made things complicated. In short, be prepared to defend your title if you find yourself earning some Repeat Offender swag. 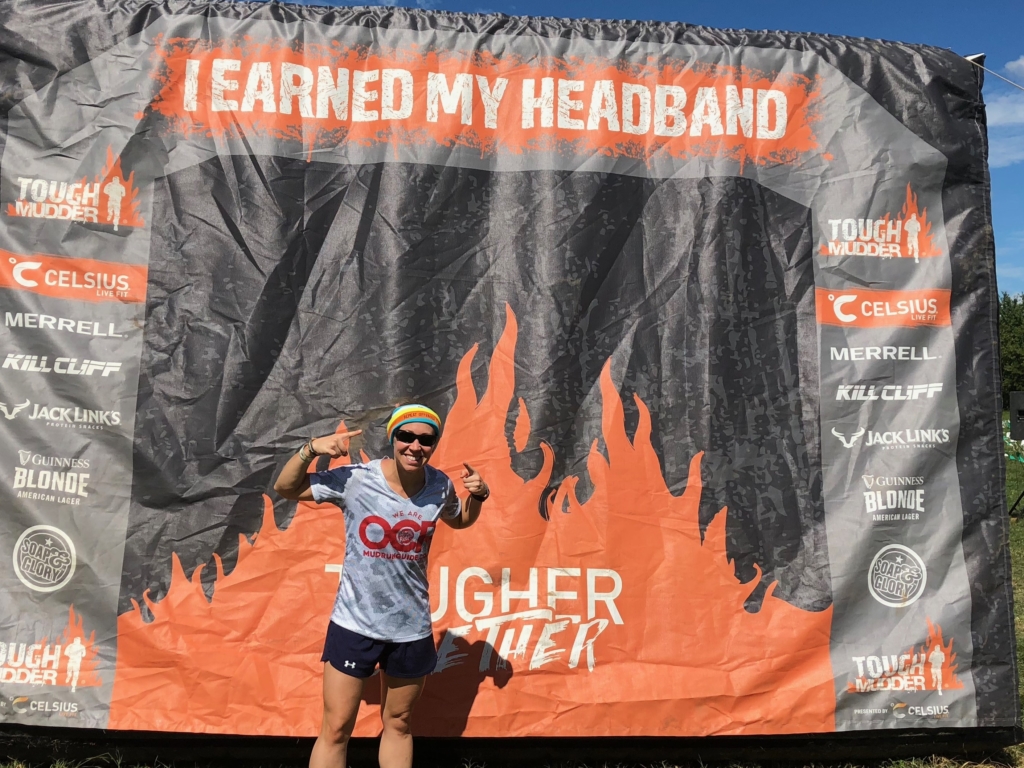 I earned them even if you can't really see 'em!

Even with long waiting times and some disappointment with the variety of obstacles in the Half, I still enjoyed my day. What makes the brand great is the focus on teamwork and camaraderie, which is exactly what I was looking for out of a fun run. Though I approached the day as a lone wolf, I was lifted both literally and figuratively by my fellow racer. I look forward to returning next year, though likely to register for a Full because my FOMO is quite real.