Aging with Grace: A Response to “Is Obstacle Course Racing Dead?”

Popular running website running.competitor.com published an article just over a week ago entitled, “Is Obstacle Course Racing Dead?” As I picked my jaw up off the floor and unfurrowed my brow after digesting this question, I set my allegiance aside while I read. To summarize, the article suggests that the newly announced Spartan Race Trail series signals the death of obstacle course racing given a declination in registration rates as high as 30% since 2015 without recovery. The move to eliminate the obstacles the brand is known for is a nail in the proverbial coffin for what some running-purists consider no more than a passing fad.

Considering Spartan Race, or any other obstacle race, didn’t premier in my world until early 2016, I found the 2015 registration peak statistic surprising. OCR has become a significant part of my life, having committed myself so fully participating in multiple events per year, engaging in OCR-centric social media, and delivering content to the masses right here at Mud Run Guide. Still struggling with the idea that this sport could be on the decline, I stopped to wonder—is OCR saturation just a lens of my own worldview, or is the author on to something? Think of the cable and network coverage OCR received over the last couple years. Since 2016, CBS Sports Network aired World’s Toughest Mudder and other events. NBC and ESPN aired numerous Spartan events. UK’s Channel 4 showed the 2018 OCR World Championships for the first time this year. Then consider the social media live streams that have exploded over the last two years. How could someone think OCR is dead when so much content is spilling out to the masses? It was time to do some digging.

To sate my inner data nerd, I reached out to four of the most popular brands in the sport for data: Spartan Race, Tough Mudder, Savage Race, and Warrior Dash. Unfortunately, my data request could not be satisfied ahead of this article’s deadline. In search of enlightenment, I conferred with Mud Run Guide co-founder and resident data guru, Brett Stewart, for insight. He cites, “Triathlon hit its peak participation 2011 – 13, nearly 35 years after the sport was born. Half & full marathons reached mass participation [in 20]13 – 14 in the USA and both have declined from there. Right now OCR is below its peak of 2015, but it is relatively ‘flat’ in terms of growth — which is a sign of maturity as well as decent ‘health’ with a roughly similar number of participants entering and leaving each year.” So the sport is not dead, rather aging gracefully.

While the article misses the mark in places (i.e., a frustrating allusion that because 70% of women keep their phones on their person during races it means the social media experience is more important than performance—the carried phone is not for safety concerns, family responsibilities, or performance tracking; your uber-competitive author reserves lap two for social media shenanigans, thank you, but I digress…), I do think the original author nailed one thing. To quote, “…if Spartan—or any other race, for that matter—wants to survive, they have to do something both casual and spectacular; they must cater to the beginner and the elite; they have to be everything to everyone.” 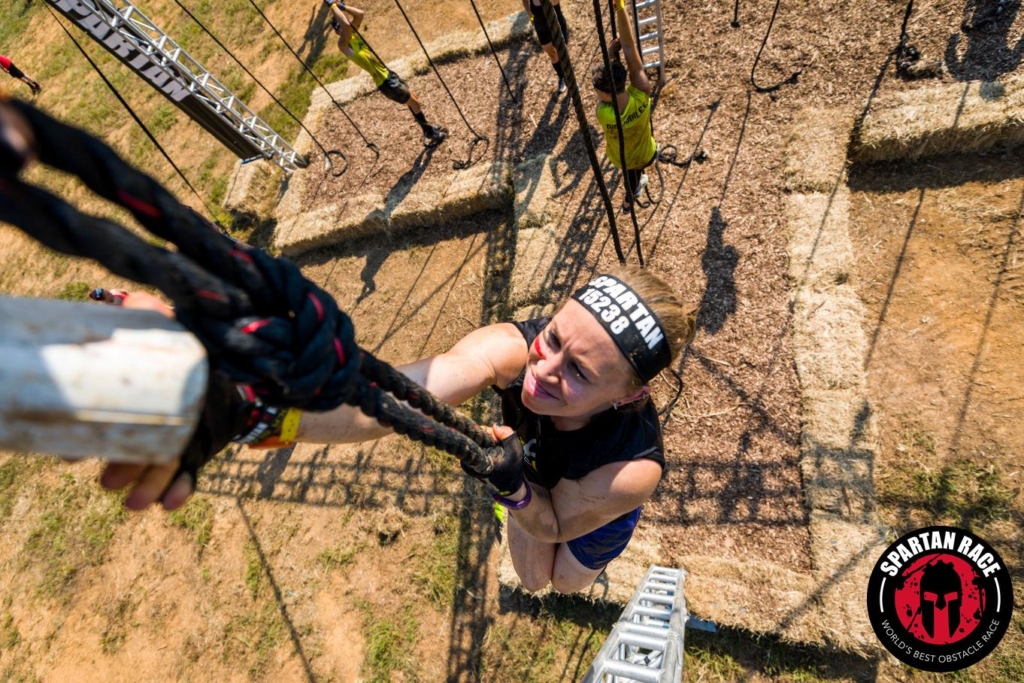 Author, proudly triumphant in a way only OCR delivers

These branches and expansions implemented to reach a wide audience with physical activity are encouraging to me as a personal trainer, student of exercise science, AND as a human with the goal of living to 100 years-old with quality of life. As Brett put it, “The WHOLE of endurance sports is being served better than ever before. Ultramarathons are on the rise, as are ULTRA OCR’s, etc.” OCR is arguably the most approachable endurance event not requiring any expensive equipment; racers may select appropriate, approachable distances; and events can be team-oriented and/or as competitive as one chooses, thus reducing the intimidation factor.

What we are experiencing now is the sport entering a maturation phase, vying for attention from all while trying to realize its identity in the endurance realm. With a recent crescendo in the OCR community’s chorus of negativity on social media regarding every misstep, disagreement, or other opportunity (see also: OCR Community Must Lead the Fight Against Trolls), these race brands must fight not only to please everyone, but to stay relevant as it matures amid the current climate. Changes, rebranding, introduction of new event types, etc. are trials the race brand leaders employ “to be everything to everyone.” Sometimes it’s a huge success, like the expansion of the kid’s events; but other times, race brands fail to rise to the challenge, particularly new or smaller/regional events, and falter or even shut down. So while OCR most certainly is not dead, this registration plateau is indicative of maturity. We are witnessing a significant stage of evolution of this sport in Darwin’s terms—survival of the fittest, if you will. As Darwin puts it, “It is not the strongest [of the species] that survive, nor the most intelligent, but the one most responsive to change.” Perhaps we should err on the side of cautious optimism as the sport evolves to serve the community and newcomers alike. I, for one, am excited to see where evolution takes us in this wonderful sport.

0shares
Disclaimer: The viewpoints expressed by the authors do not necessarily reflect the opinions, viewpoints and official policies of Mud Run Guide LLC, or their staff. The comments posted on this Website are solely the opinions of the posters.
By Hillary J. Greene|2018-12-14T11:08:45-05:00December 17th, 2018|Op-Ed|7 Comments