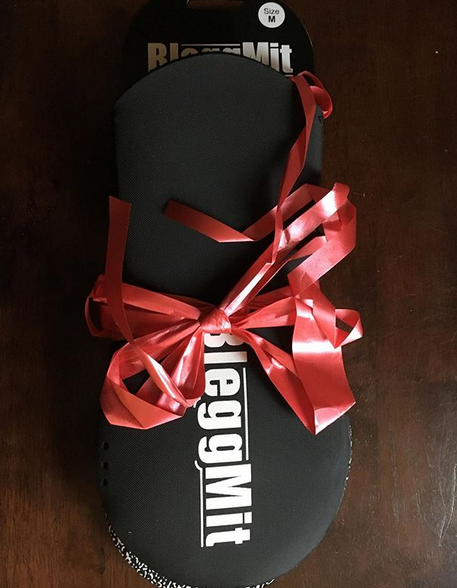 When you look at the market, I can think of very few products that were specifically designed for Obstacle Course Racing (OCR).  Most shoes primarily target trail running, but have application in the OCR world. The same thing goes for clothing.  One product specifically designed for OCR is the Neptune Thermoregulation System (which I reviewed here) and the second would be BleggMits.

BleggMits are mittens created by World’s Toughest Mudder Champion and adventure racer Deanna Blegg.  When racing Ultra-OCR, she realized it was a pain to constantly take on/off your gloves for obstacles and it was hard to keep your hands warm.  Without a good product on the market, she created her own. BleggMits allow for easy hand access without removal of gloves and using your other fingers surrounded by a layer of neoprene to keep your hands warm.  After a couple of years, she realized the design could be improved and gave us BleggMits 2.0. When owners Deanna Blegg and Amanda “Turbo” Steidle told me about the new design, I was skeptical.  The last design worked well enough in my opinion.  Simple neoprene sleeve with few moving pieces, but here is what they changed for the new version: When I read the list of changes, I was initially underwhelmed.  While the watch flap is a nice touch and the improved seams sounded great, I never had a problem with my BleggMits 1.0, so I wasn’t sold on needing to upgrade my current pair.  However, this “nice to have” upgrade became a “must have item” when I physically put on a pair and tested them.

The extra 1 mm of neoprene means it is thicker so your hands will be warmer.  The draining holes allows the water that used to build up inside to immediately leave without having to uncover your hand to drain the gloves.  Finally, the fleece lining is what pushes them over the top.  It’s not a normal fleece like you would find on a jacket but a very thin version (similar to FrogSkins wetsuits), that makes this great for all weather conditions, even when wet.  I already used them in an OCR at KC Timber Challenge in January which involved snow, ice and grip obstacles.  Even when my hands got wet, putting them back inside the BleggMits kept them warm.

My favorite features come in the improvements in race efficiency and performance.  The new opening design is easier to use, saving energy and lowering frustration of exposing your hand.  The enhanced warmth features will improve my grip since my hands will be warm and dryer thanks to the extra neoprene, fleece and drainage holes.  Finally, the textured fingertips allow me to keep the gloves on for obstacles like walls, while still having some traction.

These won’t be the cheapest gloves you own, but they are probably going to be the best gloves you own.  Coming in at around $59, they are a significant purchase.  However, when you look at the cost of an entry to a Toughest Mudder ($250+) or a World’s Toughest Mudder ($500+), it becomes a math equation where buying the gloves will save you time/money in the long run.  More people than I can count quit every year at these races due to the cold.  With BleggMits, you significantly decrease that possibility and in the end, may save money so you don’t have to pay for another race entry for redemption. CTG Pro Evan Perperis testing out BleggMits 2.0 in his first OCR of 2019.

BleggMits are an easy 5 out of 5 stars.  The gloves were designed by a world champion and then improved upon after years of testing and feedback.  I reached out to Matt Greg (currently running across America, you can donate to his Firefighter Cancer Support Network fundraiser here), to see what he had to say:

“I love the BleggMits. They work to a pretty low temperature until you need layers underneath them but they’re exceptionally convenient and easy to get on/off.”

If you are still rocking the original BleggMits or worse no BleggMits, you need to stop living in the past.  The future of OCR is here and now, and entrepreneurs/athletes like Deanna are leading the charge forward creating OCR specific products for our sport.

If you live in the eastern hemisphere order yours today direct from Deanna and Amanda here.

If you live in the US or other parts of the western hemisphere, you can order yours here, from the only website that sells them in the USA.

If you live in Canada contact Joe Perry to save some money on shipping.