In my year-long effort to celebrate a different holiday each day, I returned to my birthplace of Evansville, Indiana to observe Fitness Day, Petite and Proud Day, and, of course, Star Wars Day at the 5th Annual EPD Foundation SWAT Challenge. I was pleasantly surprised at the level of geek met by race organizers on May the 4th. From cosplayers to themed finisher gear, the Force was strong with this event. With a setting tailor-made for me and the added pledge-per-lap fundraiser campaign I generated earlier in the week, I headed out for five laps. 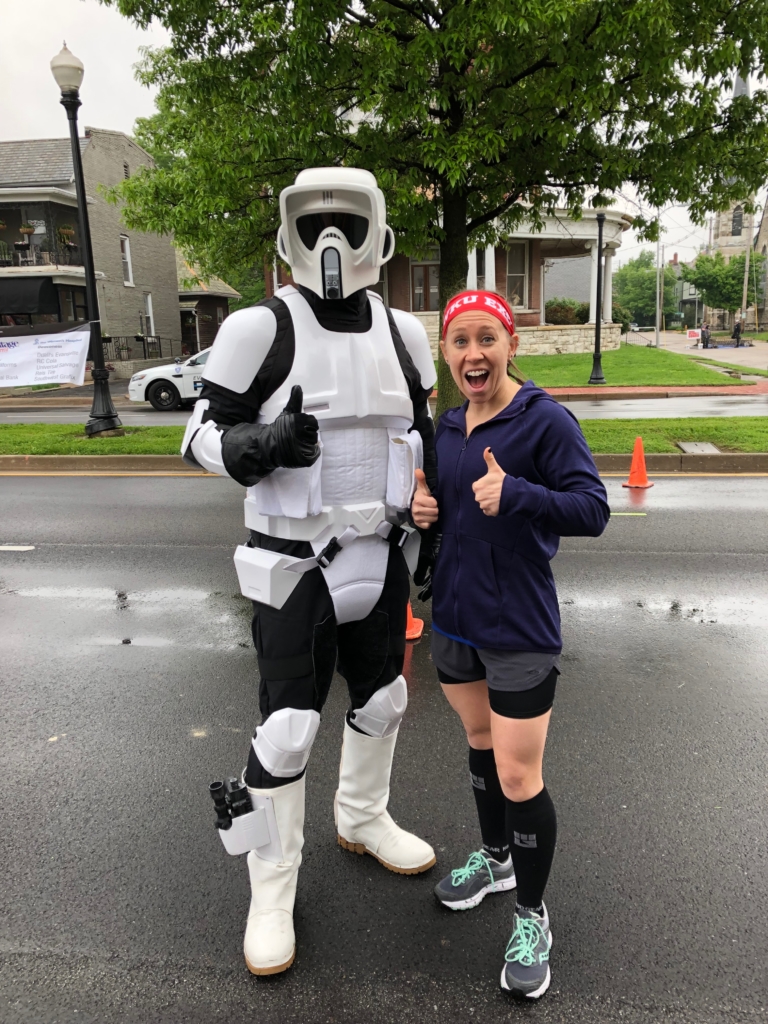 As with previous years, Evansville’s Riverfront Park alongside the Ohio River housed the main portion of the course and festival area. The 5K course wound up and down city streets keeping within a couple of blocks of the main drag so that spectators could cheer on their racers at many obstacles within a short walk. Most participants were local to the general area, so it was a fun, literal change of pace to dash through the familiar territory. Master of the Mike

Again this year, race organizers nailed the SWAT theme playing heavily to the tactical nature and cityscape. The obstacles were largely the same as previous years with some minor variations (i.e., cinderblock carry instead of gas can carry), but a new huge obstacle made its debut. Though it was never given a real name other than “new surprise obstacle,” I heard organizers refer to the large set piece as “The Death Star,” playing right into the Star Wars Day celebration. The Death Star featured angled wooden ladder climb to short platform to angled descent; the thing was one of the most massive single pieces I’ve seen at any local OCR, made even more impressive knowing it–along with many of the other obstacles–was built by the industrial tech students of the local North High School. Good job, kids, this one was quite the crowd pleaser! Among my returning favorites were the surprisingly challenging Three Lane Rig, AirSoft Shoot, and the signature Burpees or Donuts to close out the obstacles before the sprint to the finish. Aside from these, the biggest challenge of the day came from Mother Nature herself. The persistent drizzle of the early waves evolved to a windy soaking for the mid-morning crowd before calming back down to a steady, chilly rain for the last hour. While the weather didn’t seem to scare many away from participating, her wrath did prove troublesome for many at a number of obstacles. The warp wall alone claimed a significant amount of skin as racers attempted the slippery ascent unsuccessfully only to slide straight down the textured side. I had my own injury scare at the rig’s middle lane where the transition from upward angled monkey bars to a downward angled sloping pole descent made my execution less of a controlled hand-over-hand expression of domination, rather an uncontrolled slippery zip dictated by the laws of gravity (read: superfluous way to say “Damn, that was scary!”). Though I never skipped the rig, I erred on the side of caution, setting my ego aside by taking the easier route on laps 3-5 when it was really pouring so that I could continue my five lap goal to maximize my fundraising campaign. I will say, however, the rain primed the cars nicely so that I was able to execute a picturesque '90s action star slide over the hood in laps 2-5! As athletes, we can get caught up in our times or technique and forget the big picture of the local races—the fundraising aspect. What I appreciate about the SWAT Challenge is the cognizance of the event; the EPD Foundation supports the operations of the Evansville Police Department and those officers were stationed at every obstacle guiding and cheering runners on. It’s very clear at this event the level of integrity and mutual respect among the force and its community. I have been always been so proud to contribute to the cause as a participant but felt that I owed this group more. In turn, I launched my first fundraising campaign aimed at raising more funds for the cause. The “SWAT ‘til I Drop” pledge-per-lap campaign was a modest success, and I’m already planning for next year’s effort. It was a refreshing way to keep pushing myself through the day (particularly the super soaker that was lap #3), knowing that a little struggle on my end could lead to something greater in the end. Plain and simple, despite the weather and the relative inexistence of dedicated race photographers this year, the SWAT Challenge will always be hard to top for me. It’s a must race for any OCR-enthusiast local to the Evansville area, and well worth a trip if you’re itching for a fun urban course with a cause. I already can’t wait to top my course record next year!

Have you done an Evansville Police Department Foundation?

Leave your own Evansville Police Department Foundation review and feedback...