On June 15th, 2019, I participated in one of my favorite local obstacle course races of the year – the Black Swamp Dash. Created and directed by husband and wife duo, Troy and Sandy Anthony, the event is part of the Black Swamp Runner series, which also includes the Moonlight Mud Run (August 17, 2019) and the Night of the Dead Run (October 5, 2019). The Black Swamp Dash takes place at the Ottowa County fairgrounds in Oak Harbor, Ohio and is also the second event of a five-race-series, the “Ohio Grand Slam” –  a racing collaboration put together by locally-owned Ohio OCRs. Events included in the Ohio Grand Slam are Memorial Day Mayhem, the Black Swamp Dash, Indian Mud Run, Mud Ninja, and the Nightmare Challenge.

On race day, temperatures in the high 60s made for what would have been perfect “running weather”; however, scattered showers and cool winds made for a rather dreary race backdrop.

With weather and rainfall being an added obstacle, in my three years of participating in the Black Swamp Dash, this year was definitely the most challenging and the most memorable. Given the amount of rainfall the region had seen in the weeks preceding the event,  the amount of standing water and muck was remarkable and added an insane challenge all of its own, causing what in the years’ prior had been a relatively “easy”, runner-course, to be transformed into a water-logged and mud covered trek. 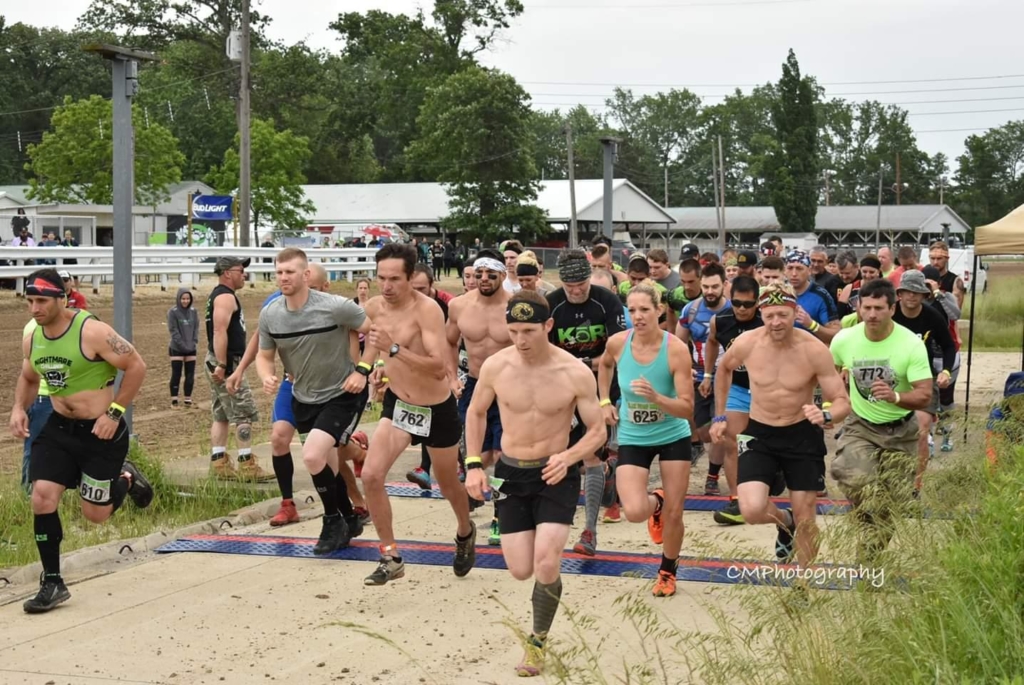 Over 300 racers participated in either timed/competitive or open waves with waves began at 9 AM and released at 30-minute intervals to allow for adequate course spacing. I participated in a competitive wave, then went back out for a second “fun-lap” with family in an open wave.

Something that sets the Black Swamp Dash apart from other local OCRs is that competitive racers have the opportunity to qualify for the North American OCR Championships and OCR World Championships. To seize this opportunity, participants in the competitive waves were required to have mandatory obstacle completion and utilized wristbands to account for those who had earned that completion. Competitors were able to try obstacles as many times as they needed to pass the obstacle or else forfeit their wristband with the only exception being a 60-foot rig, “Big Foot,” which had a penalty loop that competitors needed to run if they failed the obstacle. This was consistent with the event rules for 2018; however, this year the penalty loop was improved and made to be more challenging with various hurdles and crawls included in the loop.

Something else unique to this event is that many obstacles had various difficulty levels.  Some obstacles featured an “extreme” and a standard level of difficulty which allowed racers to choose how far they wanted to push themselves – something that my family especially appreciated in the open wave as this was only their second OCR event to date. Open wave participants were encouraged to attempt every obstacle; however, there was no penalty for skipping or failing an obstacle, which made the event enjoyable and accessible to racers of all skill levels.

Obstacles on the course were very well constructed, well-spaced and had multiple lanes.  Obstacles varied from being “traditional”, such as a rope climb, vertical walls, and an atlas carry to very innovative, such as their signatures “Little Foot” and “Big Foot”. Notably, ‘Big Foot’ was an incredibly creative obstacle – a 60-foot long rig with ropes, horizontal bars, a wooden ladder, rings, and vertical poles that racers needed to scale, swing, and traverse across. After conquering the course, in true mud-run fashion, participants crossed the finish line by running through knee-deep mud and water before claiming their finisher medal. All racers also had the option of participating in the “Black Swamp Stomp” which consisted of running an unlimited number of course laps for a fee of $10 (which I did participate in). “Black Swamp Stomp” participants then also earned a Black Swamp Pin for each additional lap completed. For his third consecutive year, Logan Broadbent set the course record for the day with a finishing time of 28:17, followed by first place female, Lindsay Partenio with a finish time of 38:50. Awards were given to the top three men and women in each age group and those who earned these spots were each awarded a hand-made plaque. The top male and female in each age group also earned a North American OCR Championships qualifier t-shirt and the top three men and women overall were awarded MudGear socks. Awards were also given to the biggest team and to the male and female “Black Swamp Dash MVP” for their outstanding help in course preparation and community support. 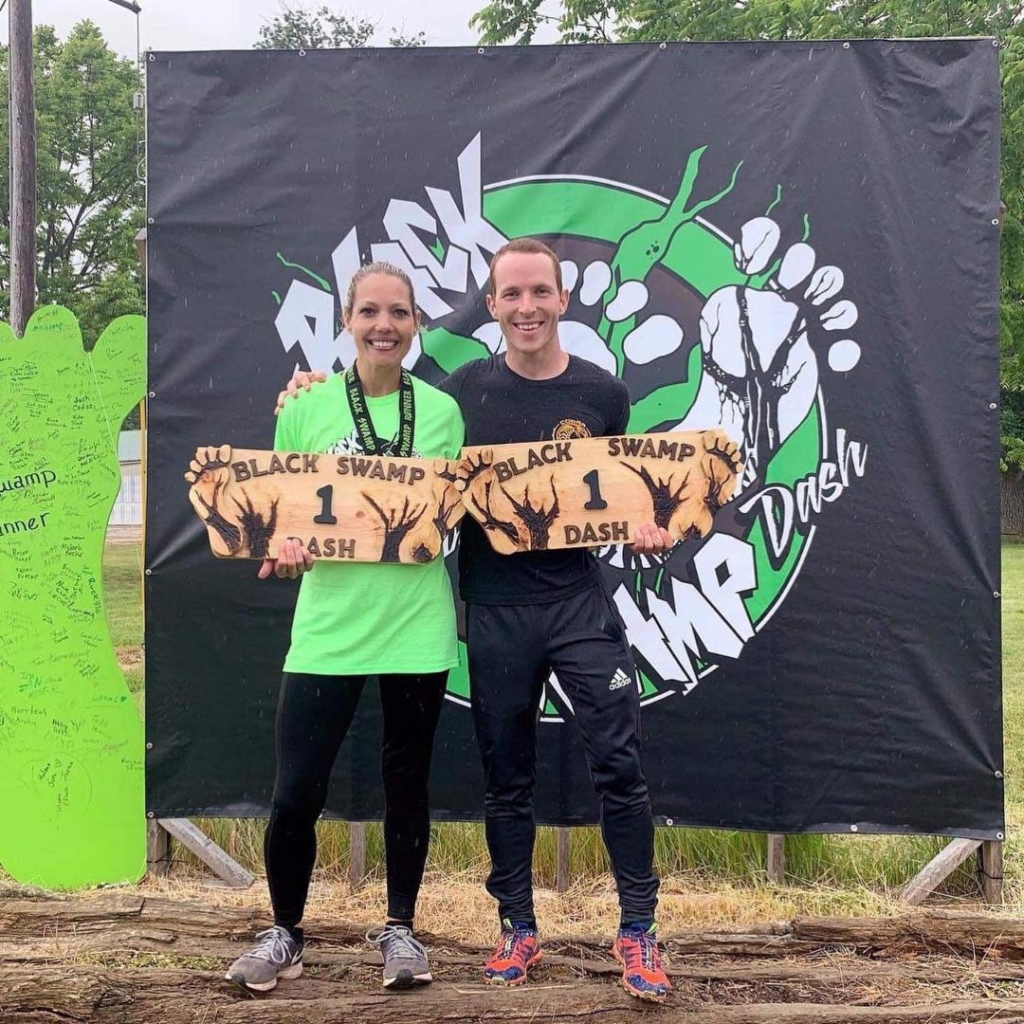 The venue offered a small festival area that had music playing throughout the day, a barbeque station, beer stand, biggest-team tent, a wash station, and a banner for finisher photos. Parking was a $10 fee per vehicle and bag check was available for $5; however, I was able to park close enough to the registration that I did not need to check a bag and instead kept my belongings in my car.

As I mentioned above, the Black Swamp Dash is a qualifying event for the North American OCR Championships, which I mention here again, because for the first time, the Black Swamp Dash obstacle “Little Foot” will proudly make its debut at the 2019 North American OCR Championships in Stratton, Vermont this summer. All Black Swamp Dash participants and spectators were invited to sign their name on a wooden cut-out of a big, lime green foot that will be placed at the obstacle in Stratton, allowing local participants a chance to be a part of this special moment in Black Swamp Runner history.

Overall, (for the third year in a row), the event exceeded my expectations and I rate it at a 5 out of 5. Year after year, the Black Swamp Dash continues to stand out as an innovative, affordable, and well-organized event with Troy and Sandy’s passion as its backbone. The Black Swamp Dash is perfect for beginners and the experienced competitor alike and I would absolutely recommend this event to all Midwest OCR fanatics! Did you stomp your way through the Black Swamp Dash this year? We want to hear from you! Leave your own review in the comments below!

*Official photos from the event were provided by Captured Moments Photography

Have you done an Black Swamp Runner?

Leave your own Black Swamp Runner review and feedback...

This author is part of the Mud Run Crew and received a free race entry in return for an independent review. All opinions are those of the author and were not influenced by the race sponsor or Mud Run Guide.
By Julie Abbott|2019-06-23T22:27:50-04:00June 24th, 2019|Race Recap, Uncategorized|0 Comments