MudRunGuide got the chance to catch up with OCR Humanitarian Nominee, Operation Valor chair, and Lone Star Spartans leadership member Sean Valigura. We learned more about what Operation Valor is doing this year, how they are expanding their events, and what OCR events they’ll be at this year! 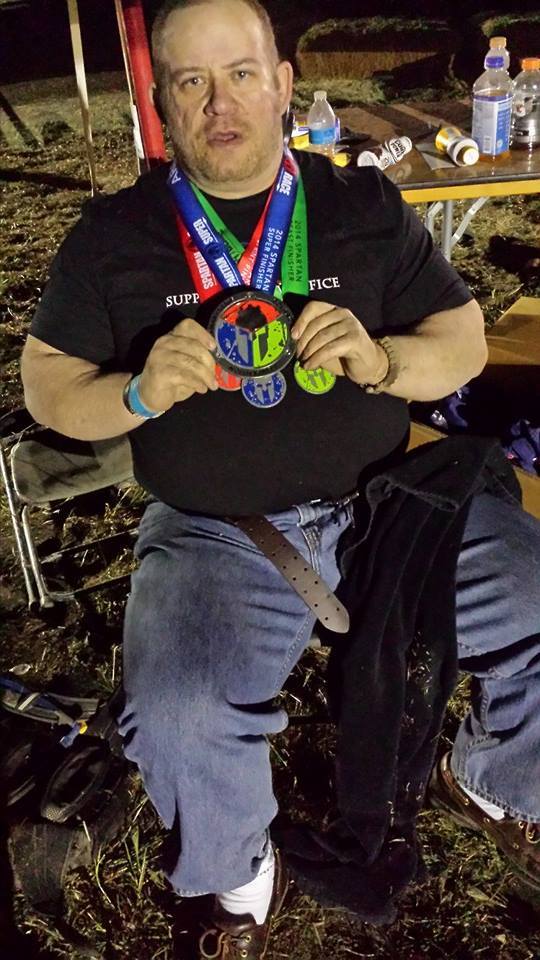 Sean and his Trifecta medal put together

Sean:  I started Operation Valor 5 years ago with really no intention of it becoming what it’s become.  In 2014, I had just done my first Spartan Race, the Burnet Super and Sprint weekend.  I discovered the community, the races weren’t fun because I was horribly out of shape.  I got my butt kicked the entire weekend, but the people hooked me into OCR.  There was an instantaneous camaraderie on the course between complete strangers, that’s forged in that shared misery.  That was a camaraderie I hadn’t felt since I was on active duty with the Navy – I didn’t realize I was missing until these thousands of strangers returned it to me on the course.  I had found my tribe, as it were.

So I went online to take a look at the next race location, and the next venue in Texas was Glen Rose.  Me being a Navy Veteran and some ties to the Seals, and after a google search of the location I found out that the venue was the same place where Chris Kyle was shot and killed.  I reached out to the leadership of LSS, which I am now on the leadership council for but wasn’t then, and asked them if they knew about this?  Of course they didn’t and they came back to me real quick and asked me to put something together to pay respect for Chris Kyle and Chad Littlefield, knowing I was a Navy veteran.  As a veteran, that’s not something you say no to.  So I put something together, a really terrible t-shirt which I know was terrible because I did it.  I have tried to erase all the existence of those tshirts, but of course when somethings on the internet, it’s there forever.  I was selling those shirts out of the back of my truck, and wound up making 1800 dollars out of it.  LSS kicked in another 200, and I wrote two 1k checks, one to the Chris Kyle Memorial Fund which went to his widow and kids.  The other went to Guardian for Heroes, something Chris started when he got out of the teams.  We were done!  It was just me and a couple of other people, we patted each other on the back, and had no intention of doing anything else.  I had been in touch with the Kyle family, Chris’s dad, to tell him who I was and what I wanted to do.  He approved, and said go talk to Jeff Kyle, Chris’ brother.  We had met a few times, talked on the phone, so when we were done in 2014, I had reached out and asked if he wanted the last 4 shirts.  He said yes, I’d really appreciate that.  Boxed them up and shipped them.

3 weeks later, I come home from work one day, and facebook has blown up for me.  I have like 230 private messages – which is new to me, I’m not that well liked.  Jeff Kyle had gotten the tshirts, and took pictures and tagged me.  It was in that moment where the idea sprung from.  Maybe this could be a vehicle to help veterans, and that’s where it began.  I started looking at what do we want to do, in what way can we provide a service to the veteran community.  I did some research, and the IRS showed there were over 46k veteran non profit organizations in the country.  The different direct service missions, there probably had to be about 100 that were serving that exact thing.  A few of them had to be doing good, just from statistics and probability alone.  Maybe the best way for us to serve the community was for to act as a conduit between the public and these veteran service organizations.  If we could find some charities that are doing good work, that are true to their mission, doing good financials but not as well known as the national charities.  If we could put a highlight on them and provide them a larger audience, the idea was that was the way to go.  Any direct service mission was already being done by dozens, if not hundreds of organizations.  Let’s do the work to find out who’s doing a good job, and put them on a podium to get them some exposure and to raise some money for their programs.  That may be more than an elevator speech, but that’s the long version of where the ideas came from. 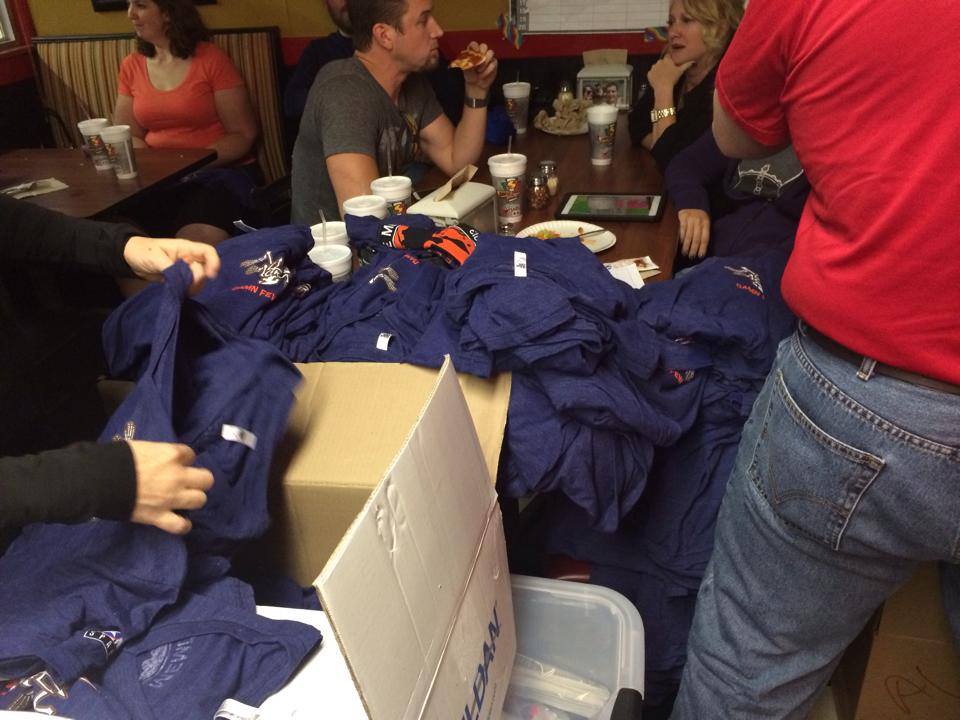 Selling t-shirts out of the back of my truck – or wherever possible! 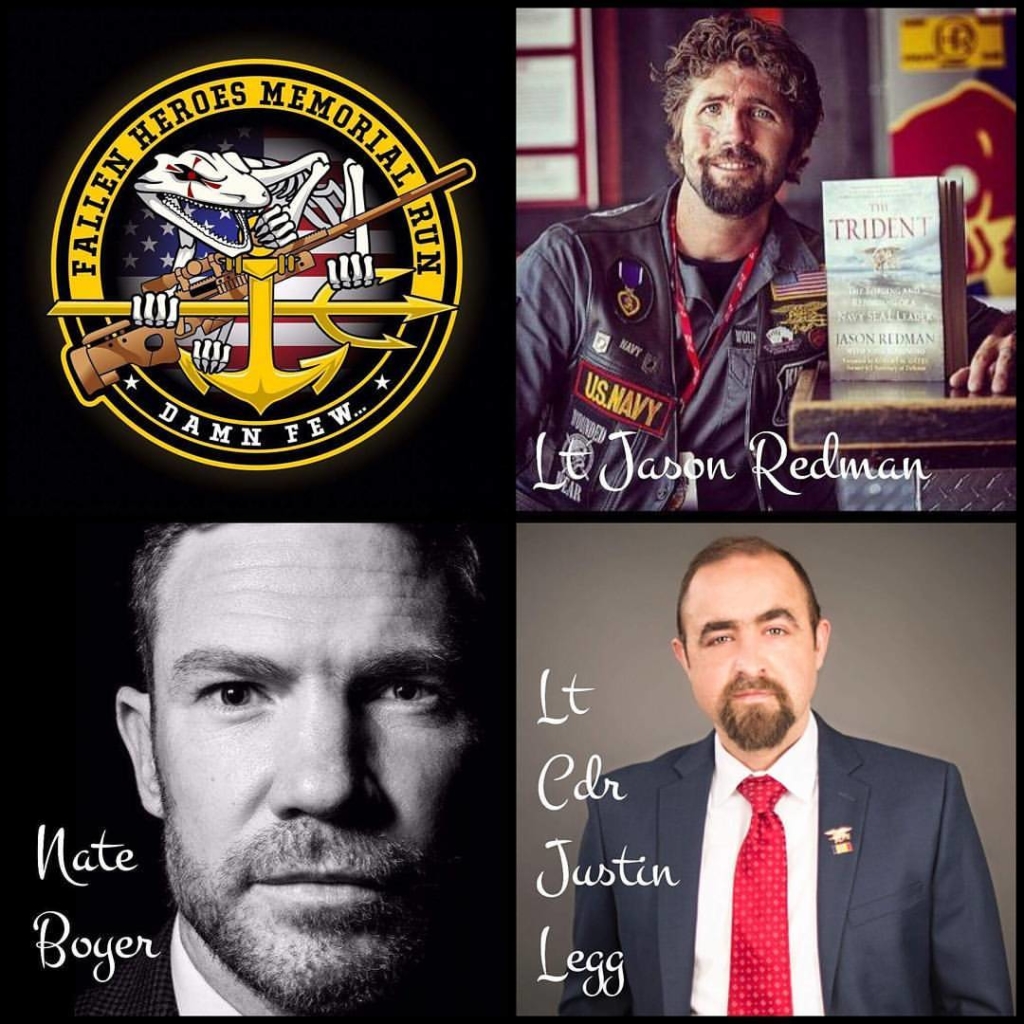 The start of the virtual runs and Operation Valor

MRG:  Let’s talk about some of the events you guys do.  Last year, I know OpValor did a virtual run, and this year you are doing another virtual run but with a “trifecta” added on.  Where do you see Op Valor going in the future with events?

Sean: You mentioned the virtual runs, so we’ll talk about those first.  Those have been incredibly popular.  So, back in 2015, which was the first year where we really did something organized.  A lot of friends and veterans reached out to me from across the country and said, we’d really like to participate in this, but we can’t afford to fly out to Dallas each year to come run this event with you and Op Valor.  So in 2016, we kind of started this virtual race element and each year we’ve expanded on that.  We started it off with the idea of the Fallen Heroes memorial which we do at Glen Rose in conjunction with Spartan Race.  Last year we expanded that to two more events, one to honor the 19 men who lost their lives during Operation Red Wings (those people who have read the book Lone Survivor or know Marcus Luttrell’s story, that was operation red wings.  We do another virtual run for the 31 guys who were lost in Extortion 1-7, there’s been a couple of books written about it, but that one flew under the radar from the public consciousness, despite the fact it was the single largest loss of life from the special operations part of the military in US History.  I actually had a buddy of mine who was on that helicopter when it came down, to me August 6th is like 9/11 in some ways because I remember getting the call related to that.  Anyway, so we do these 3 virtual events, virtual runs, and now we’ve packaged them as a trifecta.  We put together a special medal for those who register for all 3, like a Spartan Trifecta medal, for those who do all 3 of them this year.  We’re branching out to Cross Fit as well!  I’m new to the Cross Fit world – I come from more of a powerlifting or body building background.  But last May, I joined a Cross Fit place in Austin, Crossfit Central.  But with so many Cross Fits, there’s a natural mesh because a lot of people doing OCRs are also doing Cross fit.  Not all of them mind you, but a lot of them.  So we wanted to tap into that community as well, so each year we’re growing more events trying to expand our reach so we can help our veterans. 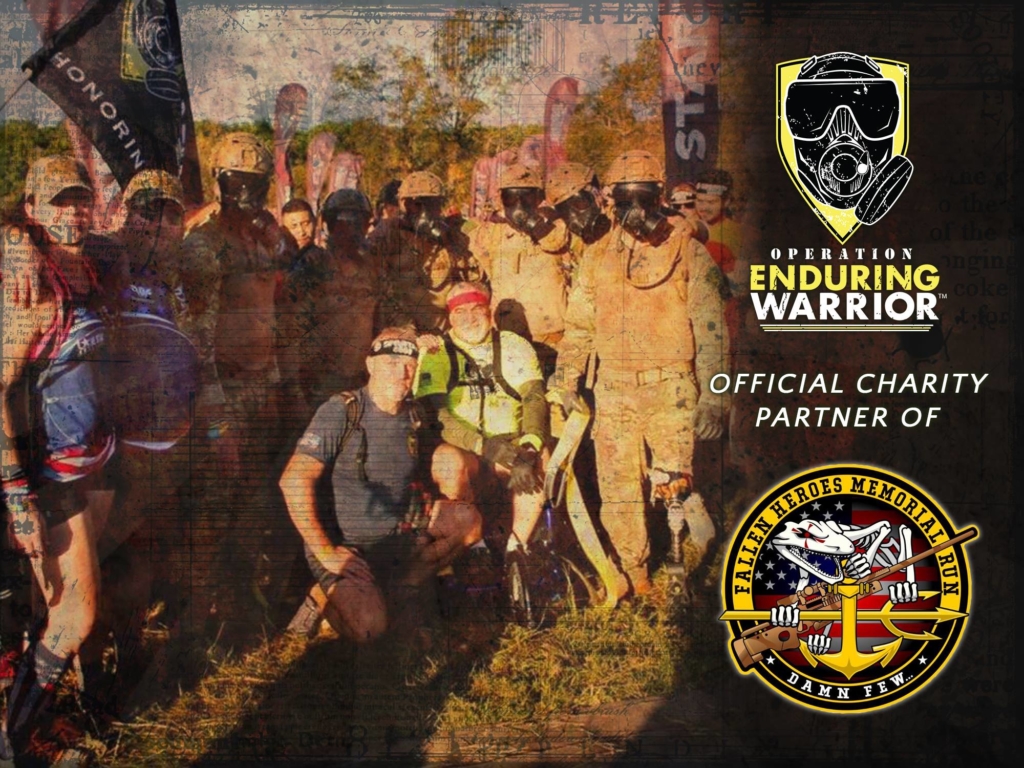 One of the many teams Operation Valor partners with and gives back to.

MRG: So we’ve talked about the races, but I know there are other events that Operation Valor does, like the golf tournament, what other events like that do you all have planned?

Sean: So this year, we had our inaugural Operation Valor Charity Golf Tournament on April 1st, and we partnered with the stand up and play foundation, who have designed these, they’re not wheel chairs, they’re not golf carts, they’re some kind of mixture of the two.  But they allow disabled people to who have lost the function of one or both legs to be able to stand up and move them into a position so they could actually play golf effectively!  My dad was, still is, a golfer his whole life.  So when the stand up and play team reached out to us and said hey, what do you think about doing something together this year, it was a natural partnership.  They came out, we held the event out in Dallas and it was spectacular.  Specifically I’d like to give a shout out to Jerry Richardson – who was the chairman for that committee that put the call together (he’s Chad Littlefield’s older brother) and he put in an ungodly amount of hours creating the event from scratch.  He and the team of volunteers did an amazing job, based on the success, we’ll definitely expand that in the future. 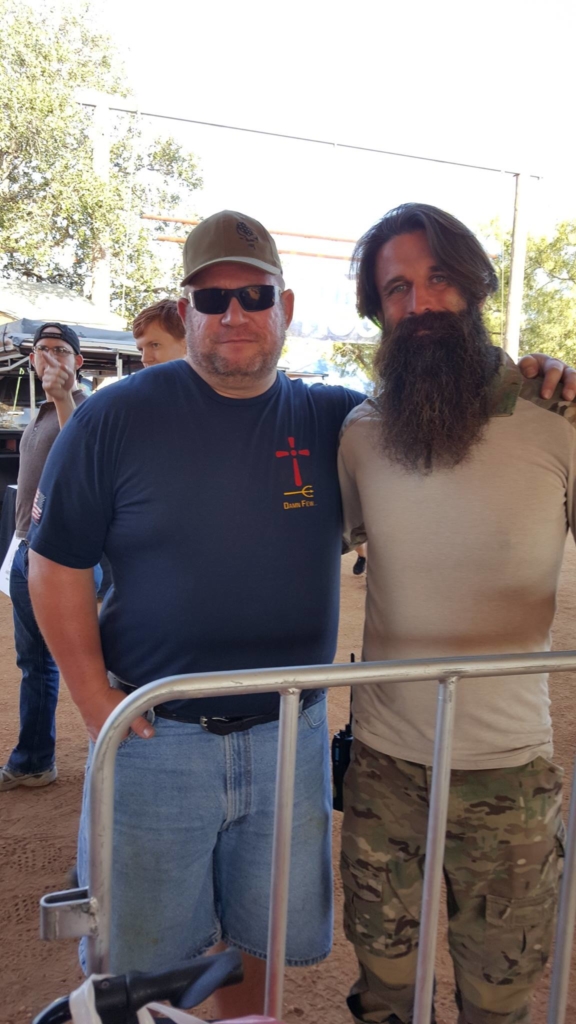 Where will we see Operation Valor this year? 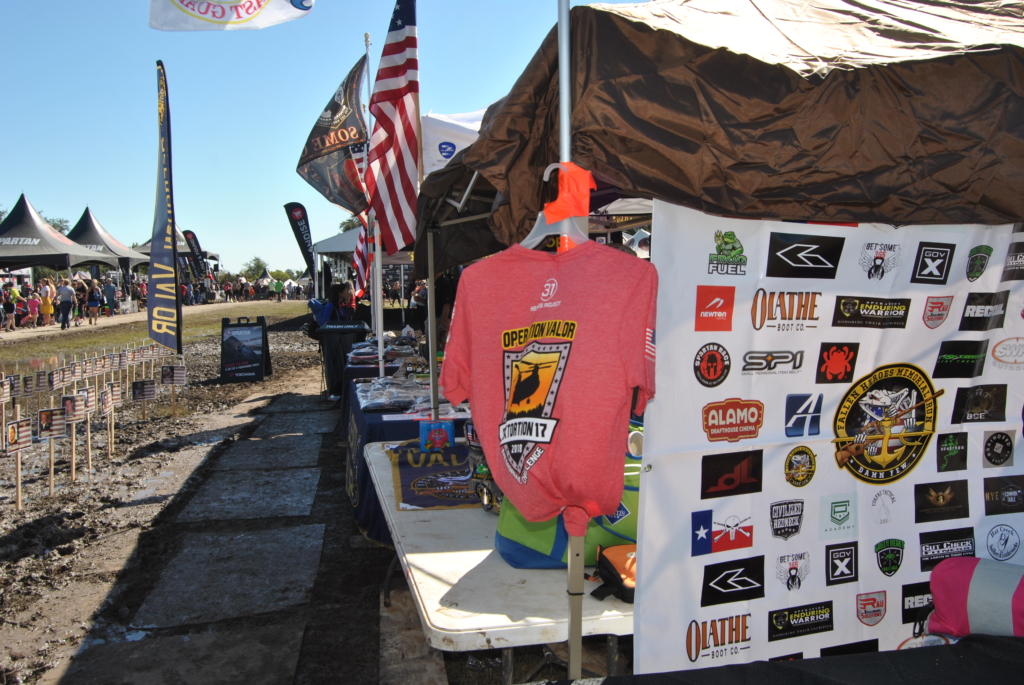 MRG: What races could people see Operation Valor at this year?  I know there’s Spartan Glen Rose in Dallas that always has a heavy Operation Valor presence, so I’d be curious what other races your team is at?

Sean: We have seen an increase in cadence with nearly all the major race series.  Obviously Spartan Race, they’ve been with us since the beginning.  Nothing but fantastic things to say about the Spartan Race Coordinators we’ve worked with.  Savage Race has been equally supportive, we went out to the Savage Race in Houston, and will be at the Savage Race in Dallas in October.  The bone frog events, me being a navy guy, I have a soft spot in my heart for those race series.  They came out to Austin – you know all too well.  They’ll be working with with Green Beret Challenge to bring in a new sort of race which should be interesting, but we’ll be there.  We also attend the Green Beret Challenge events, their events have been fantastic.  Warrior Dash and of course Conquer the Gauntlet – CTG.  Really, all the races have always been supportive and their staff.  We’ve literally grown, like I said earlier, from selling tshirts in the back of a truck to now attending 12-14 events.  This is a labor of love considering how much effort goes into it, and all of us are purely volunteers.  I can’t even began to tell you the ungodly amount of work they put in to making all of this happen.  Op Valor may have started as a one man project, but it quickly grew way beyond my capability.  We couldn’t do what we do without the team of amazing volunteers.

Operation Valor: The Labor of Love

MRG: That’s another thing to call out – this isn’t your day job either.  This is not your 9-5, like you said before, this is a labor of love.

Sean:  One discussion I’ve had with my board of directors each year – is it time to start making this my 9-5?  I’ve resisted that since day 1.  This is important to me to be 100% volunteer, and the reason is financial.  Every dollar we would spend on expenses or salary, is a dollar that doesn’t make its way to the veterans.  It’s that simple.  So as long as I’m running the show, Operation Valor will be a 100% volunteer foundation.  That way we ensure the maximum number dollars go to helping those who need it most.

Operation Valor – Here to serve others the best they can