In my 3+ years racing OCR, Saturday marked my first Rugged Maniac (RM). Paoli Peaks in French Lick, Indiana hosted the event as in years’ past. Having skied (read: flailed hopelessly) the slopes of Paoli in my youth, I expected challenging climbs at the event. Speaking briefly with Rob Dickens, Senior VP for Rugged Races, prior to the event confirmed my suspicion as he touted Paoli one of the toughest courses RM has to offer. 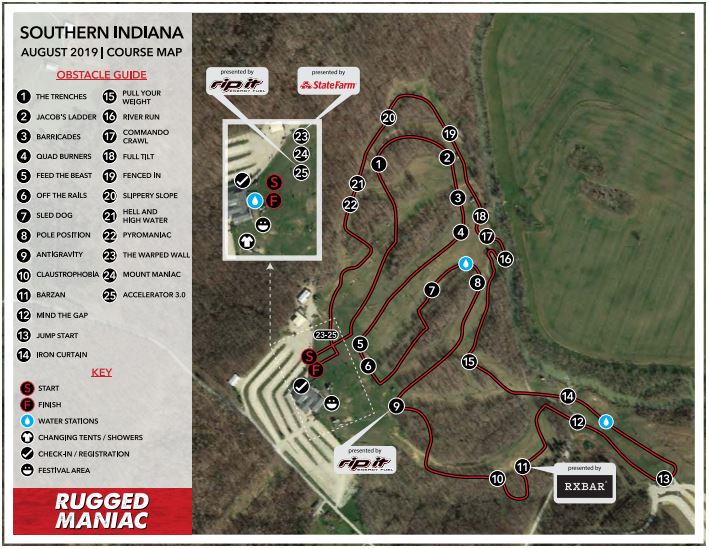 Curiosity got the best of me when I signed up for this race, as RM offers VIP upgrades with registration. Between time zone change, travel, and the desire to start earlier than my scheduled 12:45 heat, upgrading was a no-brainer. This meant exceptional parking, line-free check-in, and seamless bag drop—special thanks to my new friends at this station! Still, even without the VIP upgrades all pre-race activities seemed to go off without a hitch for racers throughout the day. The festival and staging areas buzzed with energy from my mid-morning arrival through my departure mid-afternoon—but more on the festival in a few. The emcee at the corral was effective, if not a bit rehearsed, punching up newbies and veterans alike. With every 15-minute wave, racers departed with smiles and squeals as they tramped optimistically through the first small slop pit ready to tackle the 3.1 ahead.

Let me lead with two words: Quad Burners. I know what you are thinking. Indiana = cornfields, not mountains. Lest we forget the name of the host site of Paoli Peaks. The pre-race buzz offered an operative distraction, well, that and the lack of manufactured powder, causing some competitors to forget that the festival was positioned comfortably at the top of the slopes. A handful of well-placed obstacles and sneaky downhill meant a collective heavy sigh when racers encountered obstacle #4, Quad Burners. While the course map only lists Quad Burners once, I counted 4.5 hefty slogs up the slopes. Honestly, it felt like a baby Killington with its impressively steep climbs and descents. It. Was. AWESOME.

Understanding that RM touts itself as an accessible race for everyone, I did not anticipate much challenge from obstacles. Obviously, I was wrong right off the bat underestimating the terrain, and my estimations of challenge were overturned at a number of “easy” obstacles. Honestly, I had a hard time narrowing my highlight list down to six plus an honorable mention. That speaks volumes as each of the 25 obstacles, both in nature and man-made, were quality. No task felt like filler, which is one hell of a feat for a race that emphasizes accessibility for all, yet still challenges seasoned racers alike. 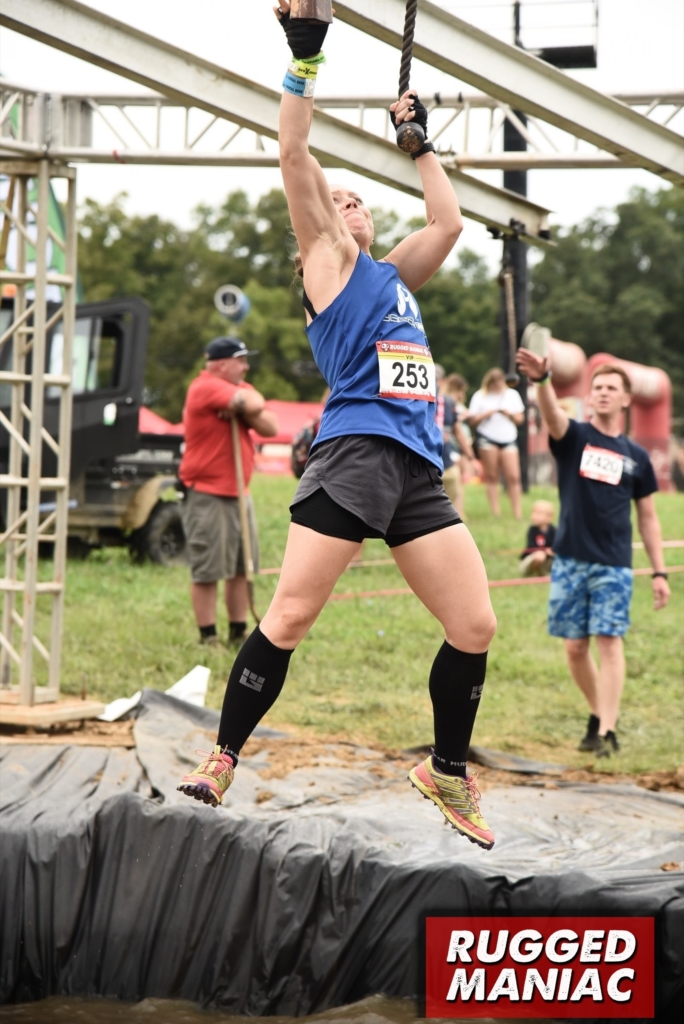 Eye on the prize at Off the Rails 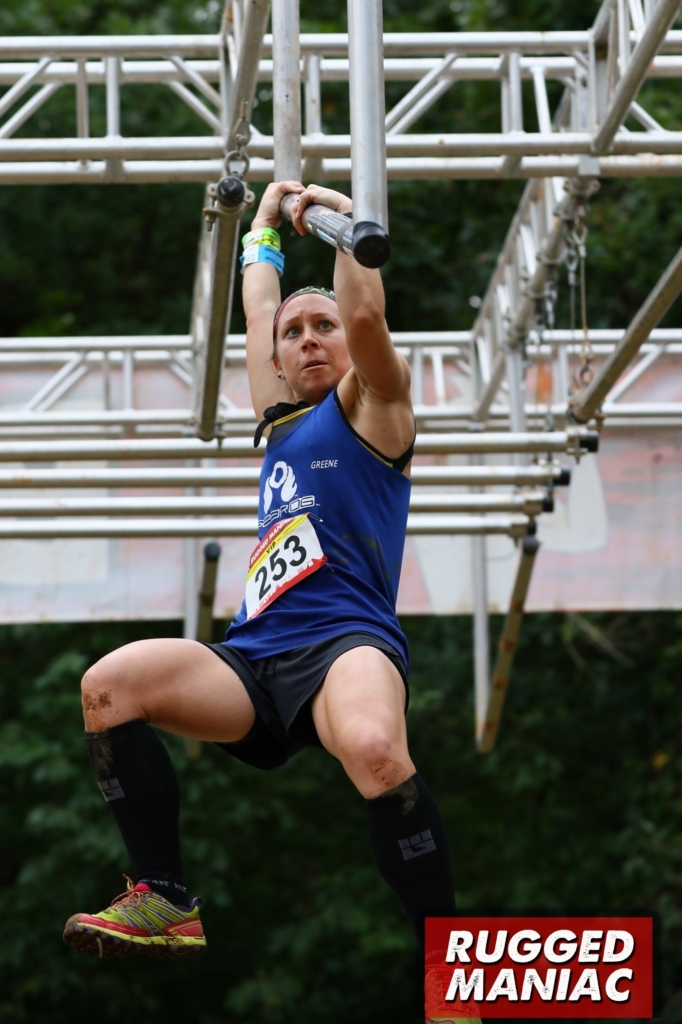 Honorable Mention: Pull Your Weight. I would be amiss if I didn’t give a shout out to my little shadow here. This first-time OCR runner, seasoned middle school cross country athlete had that signature “won’t quit” drive, sprinting up the hills and tackling each obstacle without fear. We paced each other for a mile or so, and she caught up to me at Pull Your Weight. Here, racers were tasked with hoisting piles of chains suspended from a rope. I hung out to cheer her on during her first and second unassisted attempts. Sensing that grit, I offered her my DGearOG gloves and a helpful hand at her sticking point in the hoist. The look on that girl’s face when the chain hit the rubber stopper at the top was fire reignited. That, my friends, is EXACTLY why I love this sport. Kudos to you, little killer. You will go far in OCR!

At some races, the fun is over when that finisher medal is draped around your neck. Grab a mediocre lukewarm beer, hose down, and hit the road. RM keeps that finisher high alive with an absolutely rockin’ festival. Let’s give it up for one, Vince Bracy, the resident festival Emcee for Rugged Maniac. His level of energy is perfect for that 50% festival experience that RM takes pride in. From leading a number challenges including beer stein hoists and pull-up contests to actually engaging the crowd’s during for the podium ceremony, MC Bracy comes in clutch. Even after two eventful laps, limited nourishment, and a delicious beer, I joined in the fun of the afternoon pull-up contest at his call. What I didn’t know as I approached the bar is that failure to reach the afternoon benchmark of nine meant a penalty dance on the stage. I have the rhythm of a drunk toddler, so that lit enough fire under me to knock out 14 and capture the win for the afternoon. 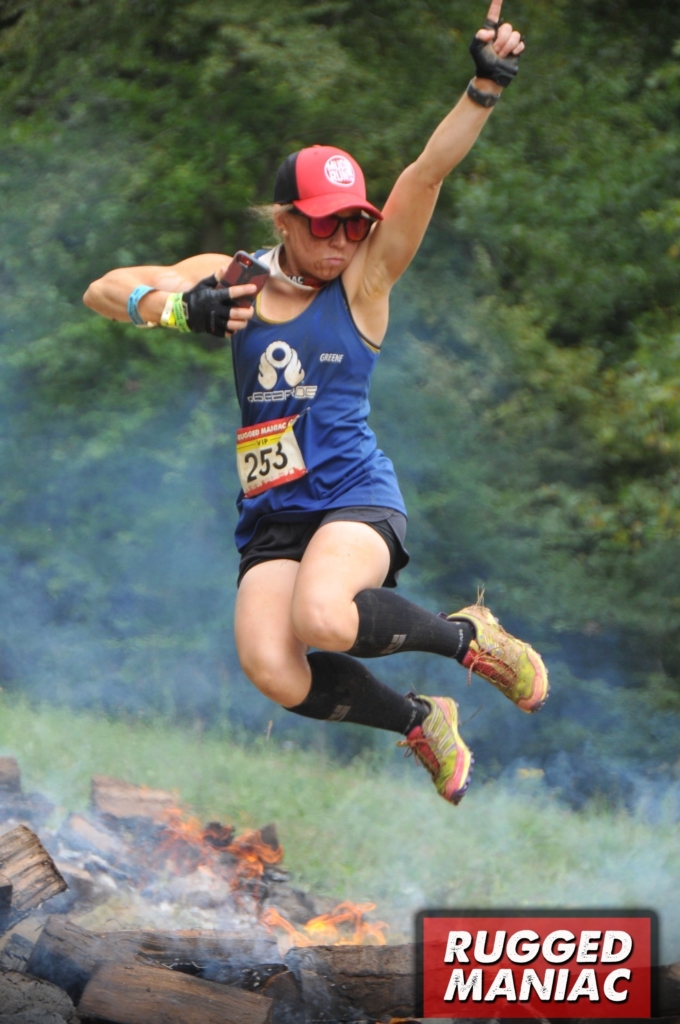 Finisher Feels -or- How Soon Can I Do It Again?

As tired and beat up as I was at the end of the day, I simply was not quite ready to leave. The temptation to hit the slopes for round three (meaning another four-set of Quad Burners) was strong. I only passed on round three due to time constraints—I spent so much time playing around at the festival that I missed the cutoff for the final heat to start that third lap.

As I sipped my stellar finisher New Belgium Fat Tire beer, wandering and chatting with my fellow racers in the festival, the atmosphere held that same electricity as when I arrived. Happy, dirty, triumphant racers posed for photos and sipped their beers with huge smiles all around. Overall, Rugged Maniac delivers 100% on the promise of “More than Just a Mud Run.” Weekend warriors looking to fill the void of the recently shuttered Warrior Dash, look no further. Burned out competitive-elites needing a fun recharge to rekindle the love of the sport, here you go. Anyone and EVERYONE can delight and conquer at Rugged Maniac’s Indiana event. I, for one, cannot wait for next year! 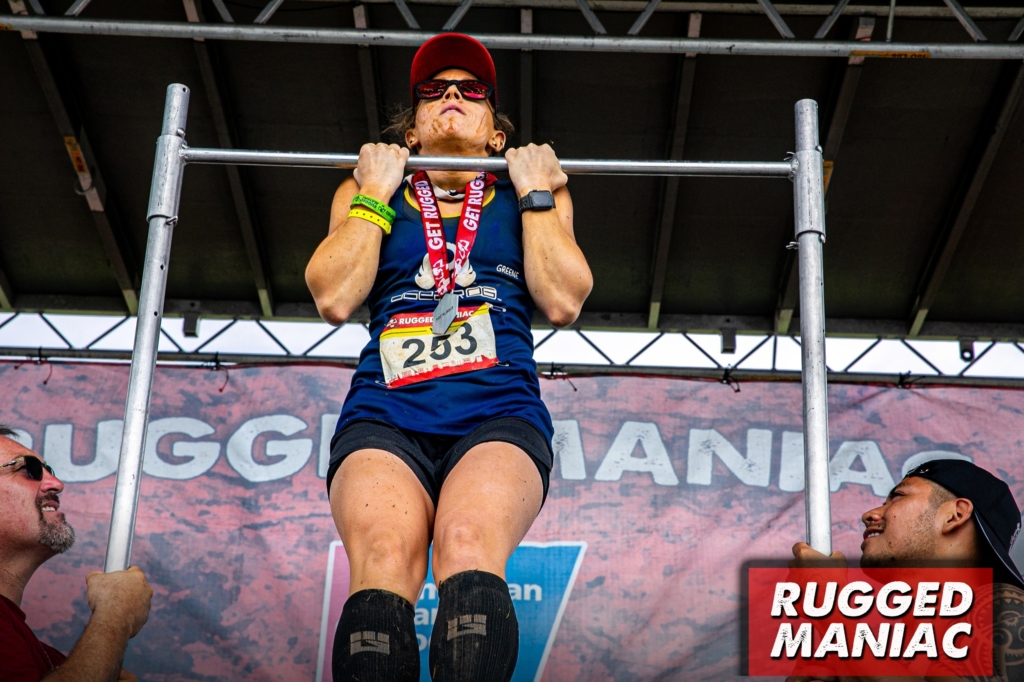 This author is part of the Mud Run Crew and received a free race entry in return for an independent review. All opinions are those of the author and were not influenced by the race sponsor or Mud Run Guide.
By Hillary J. Greene|2019-09-05T09:24:45-04:00September 5th, 2019|Race Recap|1 Comment