How does it compare to last year or Las Vegas?  That’s one of the most common questions I hear from a first-time participant to someone who has been to more than one World’s Toughest Mudder.  So I’m back with my annual comparison article of World’s Toughest Mudder.  With the announcement that this will be the last year in Atlanta (get your cowboy boots ready for Dallas in 2020), we’ll do a simple comparison of 2018 vs. 2019. Verdict:  2018’s elevation profile was harder but not by much. In 2018 things literally froze.  That’s not a figure of speech, there was ice on obstacles.  2019 had nicer weather with temperatures bottoming out around 40 degrees.  Much warmer than 2018’s bottom of around 30 degrees.  However, things like wind chill and water submersions effect how the cold actually makes you feel.

Verdict:  Based off the combination of factors, I would have to say 2018 was harder due to things literally freezing on course.  However, one of the positive things about frozen obstacles, is some of them closed allowing for an instant bypass.  All that being said, personally I found myself just as cold due to more time spent in water in 2019.  As I type this one week later, my fingertips are still numb.  Something I only recall experiencing in the two years in Atlanta and only in my very first Las Vegas WTM (2014). Which obstacles had water on them?  Pretty much all of them.  This was the wettest WTM that I can remember.  It seemed like every obstacle was a water obstacle whether it was submersion to chest (Devil’s Taint, Statue of Liberty, Augustus Gloop, Mud Mile), just your shins/ankles (Pyramid Scheme) or full submersion (Arctic Enema, Cage Crawl, King of Swingers).  Normally, I have a strategy for peeing on myself…wait until after the last water obstacle then pee…so my warm urine stays in my wetsuit longer (do you want that colored bib or do you want clean legs?).  It didn’t matter this year…there was water pretty much everywhere.  If you failed obstacles, it made it even worse at obstacles like Funky Monkey.  Even the crawls made you wet on things like Kiss of Mud, Electroshock Therapy and Mudder Press.

Verdict:  2019’s course was harder due to more wet obstacles. Alan Jones on King of Swingers

Included in both year’s version were Funky Monkey Revolution, Gauntlet (2019’s version didn’t have “Just The Tip” segment), Cage Crawl, Blockness Monster, Everest 2.0, Mud Mile 2.0, Skidmarked, Lumberjacked, Kiss of Mud 2.0, Pyramid Scheme, Operation, T Boned in 2018 (aka Level Up Berlin Wall in 2019), Augustus Gloop 2.0 and Electroshock Therapy.  In 2019, several of the obstacles were “Leveled Up”, as in “made more challenging”.  Most of the changes were minor and I would say led to a unique twist but were inconsequential when it came to mileage or physical fatigue.  There was also some that were (possibly unintentionally?) easier, like Lumberjacked, which was lower in 2019 and had better grip/foot placements.  While normally I’m not a fan of easier obstacles, the change in 2019 led to no lines at any point during the race of Lumberjacked.

Notably missing was a lack of extreme fear-inducing acrophobia obstacles.  2014-2017’s WTM had The Cliff and 2018 had The Stacks (i.e. man-made cliff).  2019 had King of Swingers, but it’s not the same level of fear as The Stacks or The Cliff.  However, Tough Mudder still lived up to its brand with other fear-inducing challenges that tested your ability to deal with cold, the unknown, closed spaces, electricity and even “tear gas”.  The obstacle Waterworks was a tight tube crawl in water that was pumped full of “tear gas”.  (The tear gas was more like menthol and smelled like Ben Gay…I actually found it refreshing.  I’ve been in actual tear gas/CS before…it’s not refreshing.)

Verdict:  Mostly a toss-up.  With obstacles, a lot depends on your own personal strengths and weaknesses.  Obstacles that play to your strengths probably mean you enjoy them more and ones that don’t you’ll find more challenging.   2017’s race remains the one with the hardest upper body obstacles by far which had Funkey Monkey Revolution, Kong Infinity, Hanging Tough (rings and bungee cord rig), Rope a Dope (jump to a rope climb to downward Tyrolean Traverse) plus a couple of walls.  However, the obstacle that takes the longest, even with passing tends to be Mudderhorn, which requires climbing and descending the massive A-frame cargo net that has been present for the last three years. Verdict:  2019’s penalties were the hardest of the last six years and definitely harder than 2018’s WTM.  Tough Mudder finally nailed it in my opinion.  This is an OCR.  The intent is to do the obstacles and the penalties should never require less effort than the obstacle.

The three biggest additions this year were the obstacle bypass bracelets, Golden Carabiners (they were actually red) and Rubber Ducks.  The obstacle bypass bracelets were a new addition to Toughest Mudder in 2019 allowing you to skip an obstacle anytime you wanted to use it by turning it into the obstacle attendant.  For WTM 2019, you got a bracelet at mile 30 and every 5 miles after that.   This made things easier compared to the previous year’s no doubt.

The quantity of “Golden Carabiners” was also a new addition.  While this concept was at 2018’s WTM, most people got one or maybe two in 2018.  In 2019, I saw people walking around with a dozen or more.  Granted the cost of the bypass was higher (3 for most of the night, then 2 and finally 1), but there was so much more.  Just look at people’s split times, there are often significant negative splits in the last couple of laps thanks to the use of carabiners.  While cool in concept and it worked for the first 2/3 of the race, the rules broke down towards the end.  That discussion could take up a full article.  If you want to hear more check out the latest Strength & Speed podcast with myself, Neptune’s Jason Rulo and Strength & Speed’s Kelly Williams.

The Rubber Ducks were literally Rubber Ducks floating in Blockness Monster.  If you turned one over and found a color, carried it the 2.5 miles back to the start, you could redeem it for a Golden Carabiner or similar prize.  I never found one but I heard some people did.  It was a fun addition but pretty sure it benefited whoever was there when the obstacle opened and very few other people.

Verdict:  2019’s bypass rules made it easier.  The bracelets were a nice addition and allowed people to bypass something that they were weak. The carabiners allowed you not only to bypass obstacles but to cutoff distance from the course, leading to possibly higher mileage. 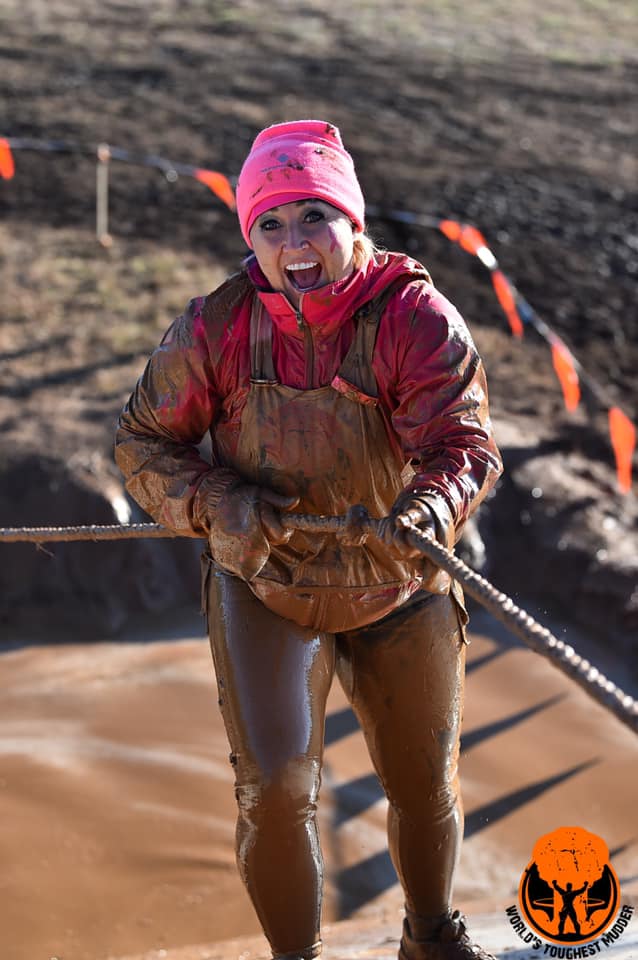 Amanda Pinky Niel happy to be walking up the Crisco covered Pyramid Scheme.

The X Factor is anything not accounted for in the above categories.  In the last couple of years most of the race X Factor has been neutral.  For example, both had a noon start and had a rolling obstacle opening (something that led to almost zero lines…I think I waited at Funky Monkey level up lane for three people twice and waited for King of Swingers for about three people twice).  Since this was the second year in Atlanta, there was less of a “fear of the unknown” for returning racers so in a small respect that made 2019 a little easier.  The largest X Factor at the end of the day is you, your preparation, you conditioning and most importantly of all your mindset.  When the mind is willing, the body will do what it's told (something I preach in my auto-biography “Ultra-OCR Man: From Special Forces Soldier to Record Setting Obstacle Course Racer”).

Verdict:  Toss-up.  You determined your X Factor this year more than anything.  Did you show up ready to party? 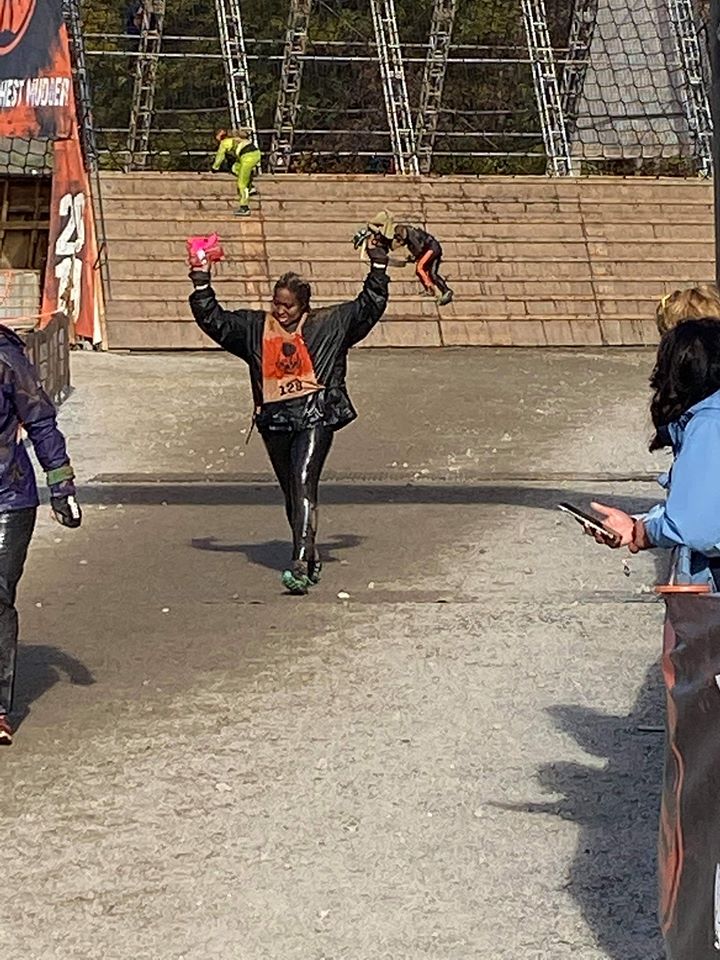 If you’ve read my other articles comparing WTM events, you probably know how this is going to end.  At the end of the day, a 24 hour OCR is still a 24 hour OCR.  At the end of the day, you are still going to have to push yourself and deal with the obstacles, the weather and dozens of other factors.  Many of these factors are external but some are self-imposed based on things like nutrition, gear choices, pacing, training, mental toughness, and experience.  In your training and preparing you want to try and remove as many of these variables as possible by having the knowledge to succeed, so you might want to pick up a copy of the only book focused on endurance OCR, Mud Run Guide’s Ultra-OCR Bible.

While some may find 2019 harder, others may have found 2018 harder.  At the end of the day, what you put into your preparation and race will determine how “hard” it feels.  Hope everyone enjoyed their two years in the terribly misleading “Hot-lanta” and I look forward to seeing everyone again in Dallas for 2020.  I’m not sure what Tough Mudder Headquarters has planned for next year, but I’ve heard “Everything is Bigger in Texas”, so I’m looking forward to seeing what they bring to the race. Rebecca Elza happy to be done after 24 hours.

Pictures provided by members of the World's Toughest Mudder Community