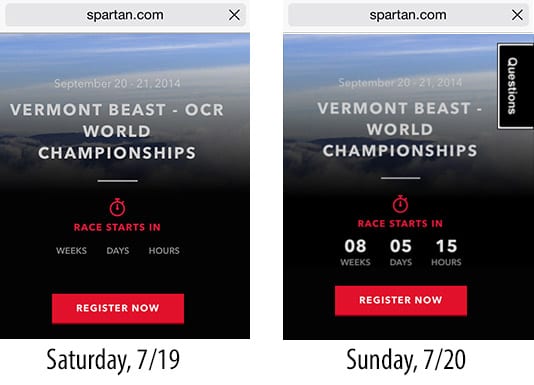 “Wow, kind of a low move by Spartan to introduce age group cash awards on the two Spartan Races that just happen to occur on the same weekend as OCRWC. There is no coincidence in my mind.” – Joe F, Facebook

It has been said  “all is fair in love and war” and “there's no such thing as friends in business”; the sport of OCR seems to be developing some sort of new David and Goliath battle that will take place this fall at 3 different spots across the US. The weekend of October 25 & 26 is shaping up to be a defining showdown in the sport of Obstacle Course Racing and possibly critical to the growth and development of OCR as a recognized “sport”.

To the casual observer, it just happens that Spartan Race is holding 2 events on the same day as the inaugural OCR World Championships. To some who have been following along with this growing “rivalry”, it may appear Spartan has taken a much more aggressive stance than they have with the proliferation of any other races in the sport and actively set out to crush the OCRWC. Many have taken to social media to voice their opinions:

“[I] totally agree. they have plenty of other races they could have rolled this out to. definitely no coincidence they picked two races the same weekend. however, this just means that OCRWC is doing it the right way.” – Pete G, Facebook

“while this sux [sic] for OCRWC, @spartanrace must be getting scared to try to kill 'em off!” – Twitter

Here at Mud Run Guide, we're a little caught in the middle; we passionately support the sport of OCR and have deep relationships with nearly every event – in this case we're personally great friends with the guys on both sides of this scuffle – Adrian Bijanada of OCR World Championships and Joe De Sena of Spartan Race. To that end, we'll provide the info that we have and let YOU answer the question:

Is Spartan Race pulling the gloves off to specifically target the OCR World Championships, and did they “hijack a date” as some are claiming?

A War of Words Turns to a War of Dates

Since earlier in 2014 when OCRWC announced their intentions to develop a world championship that isn't tied to one specific brand of events, there have been a few jabs that have been thrown in their direction from Joe, in conversations and interviews he has used variations of “we only acknowledge one OCR World Championship, and it's held in Vermont each September.” This was completely to be expected, Joe and his ever-growing team has sunk millions of dollars into developing and advertising the Spartan brand all over the world, it only makes sense that he would protect his investment when asked about a direct competitor. He's spoken with so much vitrol in the past about his distaste for the tactics of Will Dean and Tough Mudder's when both races were fighting to develop a foothold in the industry. His dismissive comments when asked about OCRWC clearly didn't seem like he was lowering the boom on the fledgeling event.

The business of OCR is still a little bit of the “Wild West” with thousands of events, brands, products, athletes, and even media companies staking their claim wherever possible. This land-grab isn't nearly as wide open as it was back in 2010, when Tough Mudder, Spartan Race, and Warrior Dash marked their huge swaths of territory. They were (and are) the biggest names in the sport, and succeeded to grab hold of the community's attention (and wallet) where so many others failed. To the victors go the spoils, that's business 101. I've reviewed Spartan Race's credo and mission statements, and at no point is there an asterisk: “we'll make sure to leave room for other fledgling brands to come in and gain a foothold.” or “play nice.”

The sport of OCR is managed a little bit differently; while people have their favorite brands, for the most part obstacle course racing athletes pick and choose between all the events available, and even the elite pro team members will spend weekends trying out other events. Anyone who follows Spartan Pro Team members on Facebook can easily spot 'em at BattleFrog, BoneFrog, Mud Guts & Glory, and Savage Race events on weekends where they aren't at a Spartan. Take the time to talk to many of these athletes, and the honest ones will tell you that Spartan isn't necessarily the end-all, be-all in the sport of OCR. There are many other events that are worthy of racing, and they're as excited to check out a new event (hopefully with good reviews) to another Spartan Race. In Spartan's defense, every event is of such predictably high quality standards it may actually be working against them.

“Spartans are starting to seem like eating Chili's – you know what you're going to get and it's pretty good, but it gets boring to eat it [the same thing] every week.” – Twitter

So, taking a step back and looking at all the OCR events that take place all over the world on any given weekend, it appears that there's plenty of room for companies of all sizes and backgrounds to put on races without drawing the direct ire of established race companies – as long as the two unwritten rules are observed:

Now, there are plenty of times throughout the year when that rule is blatantly broken; in a 3-week period this spring, 11 different race companies (including Spartan Race, Tough Mudder, and Warrior Dash) hosted event in the southeastern United States, many of those taking place in and around Georgia… and there was little, if any, outrage on social media or abuzz between race companies.

NOTE: Race companies do communicate either directly, through employees, athletes, the media and folks like us here at MRG. 99.8% of the time, everyone gets along. There have been a few famous rivalries like the aforementioned Joe De Sena / Will Dean feud, and some minor scuffles over locations and dates, but there's not a lot of drama and even less out-and-out hatred

The Other Shoe Drops

When Spartan Race recently announced the addition of an “Age Group World Championship” to take place on both coasts (Sacramento, CA and Winnsboro, SC) it raised some eyebrows for various reasons;

The date of October 25 & 26 has been pretty well established with the OCR community as the inaugural OCRWC at Mud Guts & Glory in Cincinnati, and reinforced by The OCR World Championships' change of date from October 18 in order to accomodate Warrior Dash's inaugural World Championship of their own.

Any doubts some had about whether Spartan was seriously “targeting” the date of October 25 and aiming both barrels squarely at the chest of OCR World Championships appeared to be dismissed with one email to the press on July 11: 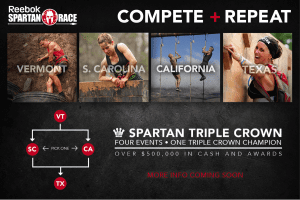 In order for athletes to compete for over half of a million dollars in cash and awards, participation in one Spartan Race on October 25 would be MANDATORY.

With one fell swoop, Spartan Race has pulled out their (and Reebok's) checkbook in what appears to some as the most calculated attempt ever to ensure that athletes will forego another singular event.

A Date With Destiny (or With a Purpose?)

What Did OCRWC Do To Spartan?

My grandfather used to say: “someone must've pissed on you to get you so pissed off!” and he was a bit of a drunk, so I don't even know if that applies. Either way, it seems that Adrian must've managed to piss Joe off more than Will Dean ever did, right? Well, here's where the juicy bits of the story just don't live up to any level of hype… there's no smoking gun. Aside from a few unanswered emails and some attempts at brokered communication between the two through business associates and friends, these guys have never had even a full conversation of any substance – especially when it comes to the desire to damage or disparage each other's businesses.

Adrian did reveal that he personally had many supportive conversations with multiple people within Spartan, including their General Counsel, and there was never even the hint of any animosity. As recently as this March, their athlete director even stated his plans to send Spartan Pro Team members to the OCRWC, as it was good exposure with all the positive reviews the top athletes have been giving Mud Guts & Glory's course. Something has dramatically changed over the last couple of months.

It gets even less drama-juicy; Adrian is a fan of Spartan Race, and even Joe. Hell, he has a couple copies of Joe's book Spartan Up! and even pitched in to help promote it.

If there was ever a cause for Spartan Race to specifically go after the OCR World Championships, it is either unknown or doesn't exist. Aside from all the anecdotal evidence, there may not even be any malice intended by Spartan Race's actions.

As of yet, there really hasn't been one, Adrian and the team has continued to go about their business and grow their athlete base of participants from all over the world. They have announced a few interesting new initiatives:

“Spartan welcomes the competition  that comes from the overall growth of our fast-growing sport. We are very proud to be one of the founding  companies that has helped  to shape the overall OCR industry.

But as in any fast growing industry where  competitors see opportunity, Spartan as a leader has been increasingly targeted in many ways that we believe have been unfair … but we understand that  is the price one pays for leadership.

Bottom Line: Spartan has invested millions of dollars building its customer base to date. A consumer has only so many dollars and only so many weekends in which to participate in a Spartan Race.  I believe, but am not sure, that  the race in question is directly competing with an annual event that we created?

We will always use prize money to try and draw traffic to our events,  and we  are surprised that offering prize money and creating a series within a series would be confusing anyone who understands our industry.”

The Story Continues… What do You Think?

For better or worse, this story isn't over yet. We're sure to add plenty of updates before October, and we'll keep you in the loop. Maybe Joe and Adrian have a conversation?

So, what do YOU think? Sound off in Comments!