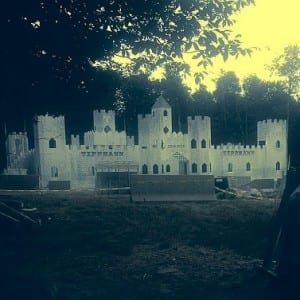 The day started out great, my friend Kelly and I got on the road early and were planning to arrive to Skirmish in Albrightsville, PA several hours early. Unfortunately my SUV broke down which required us to need be towed and wait to picked up. This cost us several hours and we ended up arriving at Skirmish around 4:15pm and missed the entire daytime version of the event.

I refused to let the fact that my SUV had a catastrophic breakdown, or that we arrived really late, deter me from having a great time and writing this great article. Even though the zombie participants were no longer on the course I decided to still run the course. I love “bling” (medals) so my plan was always to die one run and survive the other (so I could get both medals) and this seemed like the perfect run to do as infected. I took my time running the course and I was able to get a good feel for it prior to running the Black Ops (night time version). They had a really good rope climb so I climbed it a few times for practice (doing the Spartan NJ Super both Saturday and Sunday). I went on to complete the course which consisted of a total of 4 obstacles: a rope climb wall, fire pit jump, net crawl, and the rope climb (with or without knots). The course goes in to some wooded areas and even in the daytime you had to really watch your steps. 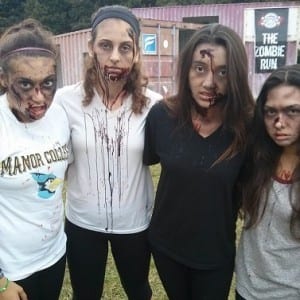 After completing the course I had time to kill so I interviewed the race director Chloe. She is a very energetic person and a joy to talk with. She made it clear that “The Zombie Run” is not an obstacle course with zombies but rather is a theatrical zombie experience with some obstacles. She clearly understood the clientele they are trying to reach are not your hard core OCR people but rather the hard core Zombie types. She explained this was The Zombie Run's first year of operations and they have and continue to learn at each event. The major change they already plan to make for 2015 is to no longer offer the day time version of the event and will only offer the “Black Ops” night version. I asked her if they had the typical amount of participants show up for this weekends event compared to the others and she explained combined between both the day time and night events they had a total of about 750 participants (human and zombies) but typically they have had around 1500 participants at previous events. The event was held on Labor Day holiday weekend so in my opinion 750 participants was a good a turn out. 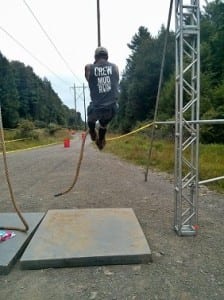 I got ready for the Black Ops and Kelly got ready to be a zombie. It was starting to get dark and the crowd was clearly growing in size and excitement for the impending zombie Apocalypse. The DJ was not as fired up or as loud as some of the others at other events but he still did a solid job and as far as music selection he played the best play list I have heard at any event so far.

It was now night time and very dark and the zombie participants were stationed throughout the course and we (the humans) where cattled in to a huge metal shipping container and given a speech that basically said we where the last hope to save the human race. I am not going to go in to detail about the zombies as I don't want to ruin the experience for others planning to go to a future event. I will say running the course in the dark, dealing with the waves of zombies, doing the four obstacles noted above and interacting with the other human participants was a blast. This was a very different type of course for me, I normally have a good idea how hard I can push myself and set a pace but with this you can't really do that. At one moment you will be running at a pace that you are capable of maintaining (as well as safe) in the pitch dark of the woods and then the next moment you are turning on the after burners and running as fast as you can to avoid the zombies. I was excited to learn that climbing the rope climb came with a prize of receiving one extra life! Other then tripping on a root in the pitch dark and smashing in to some female human participant while trying to avoid a zombie that jumped out of a hidden spot I had no close calls. I am happy to say I survived the Apocalypse with a total of three life's (started with four and got the extra one on the course). I was happy to know I would be leaving the event with two cool medals! 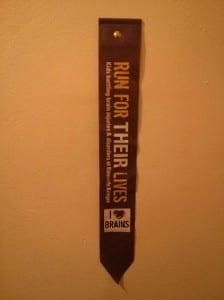 I enjoyed the day/night and have no complaints with how the staff ran it, everything from registration to getting your beer at the end all went well. Overall I am giving The Zombie Run a score of 3.3 out of 5. This is based both of mine and Kelly's experience with the overall day and night.

I gave Chloe some suggestions such as they need to sell affordable head lamps at the event (it can be really scary and dangerous in some parts of the wooded course without light), the rope climb for a free life is to challenging for younger kids and other participants so a more appropriate obstacle should be offered for them. I didn't make this suggestion, as it came to me on the drive home but it would be great if they could somehow add a method to pause zombies (five seems like a good number), my thought was maybe a card system and each human has five cards with them that only works on one zombie and for only that one human participant. 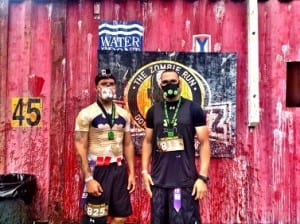 The Schwag was nice, I received a nice shirt (white for day & black for Black Ops), two nice medals (red for infected & green survivors), a nice branded drawstring bag, the zombie participants got a red branded water bottle, and after the race the DJ gave out a boatload of white branded head bands and additional Black Ops shirts.

I started the course with four lives. You start with three and can buy a fourth cool purple special charity flag for ten dollars with all the proceeds going to the Kennedy Krieger Institute. They are a great charity and I am sorry to say that I didn't notice a great deal of the human participants rocking the purple flag. My last suggestion I am going to send to Chloe is they need to really hype the charity flag a lot more prior to the start of the course. I hope anyone that reads this article and participates in a future The Zombie Run buys the additional charity flag. I was very happy to donate ten dollars to a great charity. As always I want to thank both The Zombie Run and MRG for the opportunity to have a great day.
3 out of 5 stars

Did you do the Philadelphia / Scranton Pennsylvania The Zombie Run? Share your own rating & review about the event today!