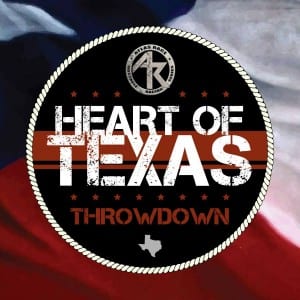 Calling all Texans! Atlas Race is changing it up and giving the OCR community more of an incentive to head to Texas for some racing this year. The Heart of Texas ThrowDown is a three part series within Atlas Race that includes San Antonio, Dallas, and Austin. Racers that complete all three events in 2015 will earn a special medal and t-shirt for completing the ThrowDown. Only those individuals who complete all three will be eligible for the ThrowDown medal and shirt. Atlas Race is giving athletes a few different ways and options to compete in this showdown.

For the Elite Racers:

Elite men and women will be able to compete in a special aspect of the series. To be eligible to win the Heart of Texas Elite ThrowDown athletes must register for an compete in all three events in 2015. The winner of the ThrowDown will be determined by best overall average placing within the three races. For example an athlete that places 1st in San Antonio, 10th in Dallas, and 3rd in Austin would have an overall average place of 4.6 (rounded up to 5th). Where someone that places 2nd in all three events would have a better average placing.

The top male and female Elite with the best overall placing between the three events in both race lengths will be awarded with a special trophy and crowned the official Heart of Texas ThrowDown Champion. Similarly there will be age group (masters and juniors) champions who must have competed in all three Texas events.

The top male and female Elite, Masters, and Juniors will also be awarded entry into the 2016 OCRWC event.

The Elite male, female, Masters, and Jr champions will be given Atlas Race Athlete Ambassador status for 2016.

The Elite male, female, Masters, and Jr champions will be given free entry into the 2016 ThrowDown series to defend their crown.

For those looking to race with their friends a team aspect has been added as well to this throwdown. Looks like it's time to start rounding up the posse. Heart of Texas ThrowDown will have a Team aspect where competitive teams will be able to compete in all three events for the Team ThrowDown crown. The winning team will receive free entry to the 2016 ThrowDown series to defend their Championship. Finally, the winning team will be given Atlas Race Athlete Ambassador status for 2016.

For the Open Racer:

Atlas Race has their eye on not just the elite racer during this throwdown but also the open racer as well offering a sweet prize for the team who can bring the most people to each event. It's time for all the teams to put out the call and find out who will take home the “Big Ass Team Award”.

From Atlas Race “there will be a Big Ass Team award” for the biggest non-elite team that registers for all three ThrowDown events. To qualify the team must have the overall most registrations combined between all three races and must be represented at all three events. For example a team CANNOT qualify by showing up in San Antonio and Dallas but not have anyone from their team registered and present at the Austin race. Teams must have registered participants at all three events. The winning team will receive a special award and discount code good for entry into the 2016 ThrowDown series.

With this announcement everyone in Texas now has three more races to add to their calendar this year!

To find out more about Atlas Race, check out our event page & find the races near you! Use discount code MRG10 for $10 off your Atlas Race registration!