The Spartan Race in Miami was the toughest race I've run since the race in Asheville…which was a Spartan Super in the mountains.  That's particularly strange to say, considering how flat the Miami terrain is.  But is wasn't the course itself that made it hard, it was the water!  As much as 13 inches of rain in the days before the race!!  What it did to the course was incredible.  What it also made me realize…days later…that this was a race that never should have happened! 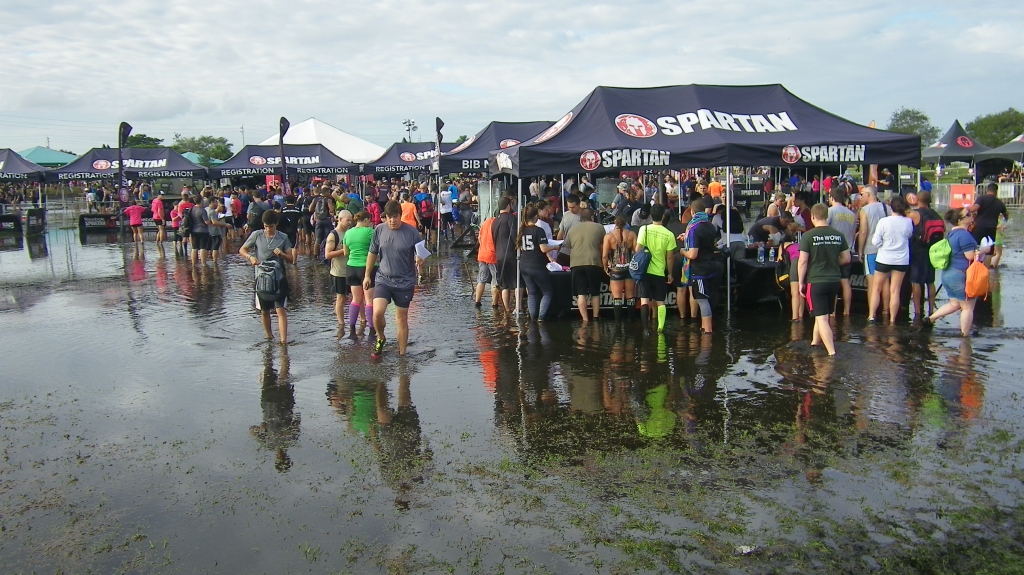 Not that it should have been canceled.  No…I mean the flooding at the venue should have made holding the event inconceivable.  Yet, this became one more example of what the obstacle course racing (OCR) promoters can accomplish…scrambling once more to arrange off-site parking.  What was most interesting, is that I heard very few complaints about the parking, even though it was a 40-minute ride to the venue!  And I think there were two reasons for that.  1) The first glimpse of “Festival Lake” blew away thoughts of anything else.  2) Hey…this is Miami!  Traffic laws…mere suggestions.  And parking laws….please….”We don't need no stinking parking laws”.  So basically, most everyone went directly to the venue, parked pretty much wherever they wanted and walked in.  Problem solved!

Having arrived at the venue myself, I have to admit I was shocked!  I was there Wednesday with the festival build crew and it was…..well, normal!  By Sunday morning, it was a lake….literally!!  Registration was in a foot of water and you could walk from there to bag check then to the start corral without ever leaving the lake.  Getting ready to race was another challenge and, already wet and muddy from the Lake, I finally headed out to race.

Initially, the course itself was fairly dry (once you left the corral of course!) as it began on higher ground and stayed on the hill for some time.  But then, we came down off the hill…and that's when the trouble started.

Walls are typically not that big a problem, but hitting the 7′ and 8′ walls on the outbound loop was a real challenge.  Have you ever tried jumping out of a mud pit?  Your feet get sucked down and, although super-slo-mo might show otherwise, I'm fairly certain I never actually left the ground.  Fighting up these babies, it's also understandable why I have the wickedest…and most colorful…same-day bruise ever!  And that was the way the day would go.  Wading through canals that hadn't even existed just days before and were never intended to be part of the course.  A swamp buggy would have come in handy more than once!  I guess it's not particularly surprising to find one place that turned out to be a popular hangout…the a-frame cargo net.  Seems it was one of the few spots on the lower course where you could actually escape the flood…which would explain why everyone seemed to be taking it real slow going over! 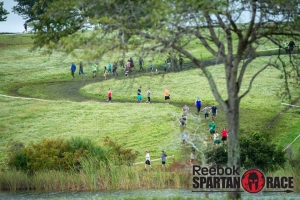 Ironically, the inverted wall…which can be the toughest wall…was relatively the easiest this day, since you could climb the boards and get over without having to jump.  The slip wall was actually business as usual too…normally being wet and muddy anyway.  The carries though, were a real mixed bag of joy.  The sandbag, while long and on a not-quite-dry hill, was relatively easy.

On the other end of the spectrum was the bucket carry.  I gotta say, this one really should jump the jerry can carry as my least favorite of them all.  And this particular carry was just gruesome.  A long difficult track and two crossings through a now flooded drainage ditch made this one just bad!  You probably could have built a roadway over that water with all the gravel dumped along the path.  Then somewhere in between the two was the atlas carry.  A seventy-pound concrete ball that had to be lifted then carried across yet another now-flooded ravine.  This added an all new level of difficulty navigating up and down steep, slippery banks into some unknown depth of water while carrying this object.  If not the toughest obstacle, certainly the most feared…on a fear-per-foot basis.  Any slip and fall could have meant disaster. 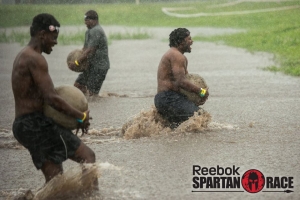 Then there were also obstacles that were almost comical.  The herc-hoist was submerged!  All that was visible were the tops of the bags.  Many people were just bypassing it…or gave it a half-hearted attempt.  I, however, can't resist that sort of  challenge…..however ridiculous.  Pulling, dragging, walking it back……somehow, I managed to complete this once again…one of the few highlights for my day.  What wasn't so much of a highlight was the plate drag.  Did I mention submerged obstacles?  I think I actually did laugh-out-loud as I approached this one.  All you could see was the stake at one end and the rope disappearing into the water.  The plate, with it's sandbags, was apparently dragging across the seafloor, catching on underwater ridges.  Another obstacle I felt compelled to conquer…which most people really did laugh at and walk through the swamp right passed it.  Speaking of highlights though, I hit my first spear throw in three races…standing on a hay bale in a mud swamp…go figure! 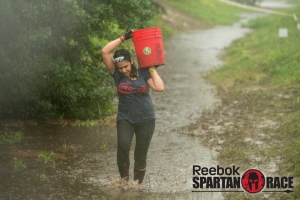 The rig and the rope climb were exactly what you would expect…wet and/or mud-slicked.  Although a decent percentage of racers were able to do the rope climb, the rig didn't appear to be so kind.   The dunk wall……..the mud mounds…….redundancies!  I mean, at this point you couldn't get any wetter or muddier!  Even the barbed wire crawl was so flooded on one side you could virtually swim it.  Boggles my mind that so many avoided it…seriously, you don't want to get any wetter??!! 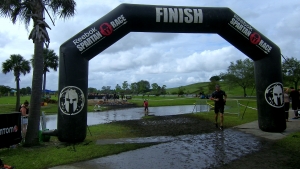 But this race was turning into something unusual for most people.  The last couple of miles were spent slogging through various depths of water and mud…just getting from one obstacle to the next was a struggle.  Even the final 50 yards from the fire jump went down through one last water pond.  I think this race…in many people's minds…became a do-whatever-you-can course and just finish!!  Spartan Race had come up with a challenging course.  In the end, it appears that mother nature can do a pretty good job creating obstacles too! 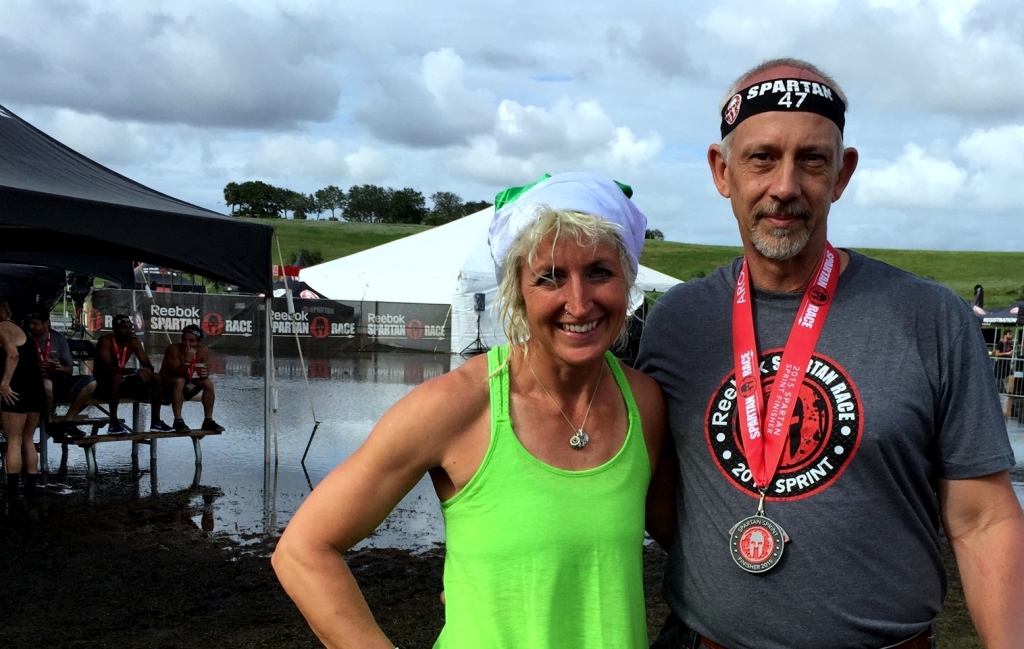 Are We Expecting Too Much From Our Obstacle Course Racing (OCR) Events?