If you weren’t at BattleFrog Phoenix last Saturday, you missed out! BattleFrog debuted their second west coast race of the season at the picturesque “Ft McDowell Adventures” in Phoenix, Arizona. This location has acres of stunning Sonoran Desert views and is host to many outdoor activities and events to include TV’s “The Amazing Race.” With rolling hills, scattered Saguaros and 360-degree mountain views, you could not have asked for a gorgeous venue (or more perfect weather). 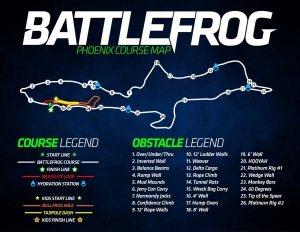 After a short bus ride, participants were welcomed to the event by an authentic western building that served as part of the festival area with extra tables, fire pits and a sound stage for all to enjoy. The small nature of the festival area made it convenient to access the start/finish lines, bag check and changing tents. They also added a fun twist to the festivities by adding karaoke with a secret contest. 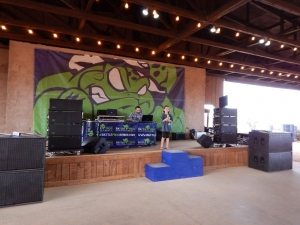 This course, unlike San Diego’s, was one large loop that many GPS’s registered as 6 miles long. While some of the course was on open desert paths, other parts were trickled with rocky terrain and the infamous sand washes that smoked racers legs. The layout of this course was more forgiving in some areas with longer running portions towards the end. However, the primary complaint was the amount of “sand running” throughout the course.  Also, the placement of Tip of the Spear followed by the Platinum Rig #2 was a clever mental trick for racers and a true test of their grip strength. I was appreciative of the placement of the Jerry Can Carry as it gave racers a chance to rest their grip before and after.

Some things to look out for with Battlefrog this year are the new and improved obstacles that you thought you had mastered. For example, don’t underestimate the Tip of the Spear! They upgraded the wooden A-frame by putting a plastic surface, which 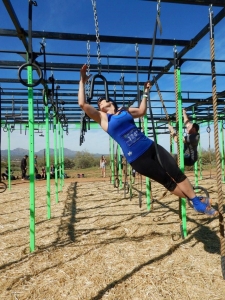 makes it tough to keep your feet up. They also redesigned the hand holds on Tip of the Spear from a horizontal hold to angled holds. The Weaver has taken many by surprise testing your entire body with its over-under movement. Another new obstacle is the Balanced Beams, which will test your balance on a slack line just like the Ninja Warriors do on TV.
My only suggestions for improvement would be more clarification on the parking as the website listed the We Ko Pa Resort and Casino whereas email said it was on-site. I would also add extra flags to guide runners to the finish line because they began to look a little scarce at the very end.

Once again, Battlefrog delivered a well-organized event with high quality, innovative obstacles that challenge every level of athlete. If you missed out, don’t worry, they are returning to Phoenix on November 19th, 2016. Hope to see you all there. 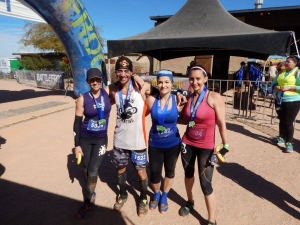