What could be more fun than running an obstacle race on a beautiful Saturday morning in Southern California, with snow on the nearby mountains, and warm Santa Ana winds blowing? How about bypassing the finish line, and going around and around on the course to see how many laps you can put on in a day? 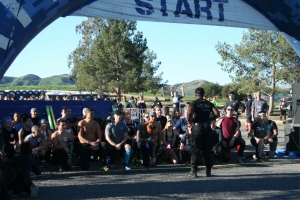 This was our plan when my wife and I showed up bright and early at the Prado Regional Park in Chino with a box of extra gear and fuel; after running our first BattleFrog race in San Diego, we were hooked and ready for more. Christopher Acord (BeardTM) briefed us on the BFX rules: heavy carries like the jerry cans and Wreckbags were mandatory; other obstacles should be attempted but could be bypassed by opting for the penalty of 10 x 8-count bodybuilders instead. We could spend as much time in the pit at the end of each lap as we wanted, but must start our last lap before 3 pm, and only 3 or more laps would earn the coveted BFX medals.

Shortly after the elite heat hit the course, it was our turn. The fairly flat course wound through the park and around the small lake in the middle; we spent much of the day running on grass and dirt service roads before ducking into the woods and along the creek for my favorite part of the course; what I dubbed “the swamp”. 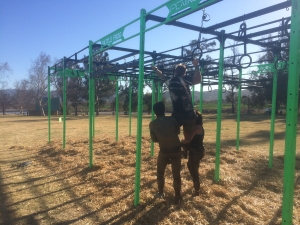 From the start line, we encountered some relatively clear obstacles such as O-U-T and walls of various sizes and angles, which lulled us into a false sense of security before hitting the first Platinum Rig. This one was configured to be almost all rings, hanging at a variety of heights and distances, with a small set of fixed bars about 2/3 of the way to the end. After a couple of false starts, I was able to find my rhythm and made it across.

Once past that, we came to my favorite obstacle of the day; a wall climb followed by a slide down a tube into a water pit. This was very chilly on our first early lap but became a welcome respite from the heat later on. A scramble over the scarily tall Delta Ladder brought us to the first truly evil design in the course. 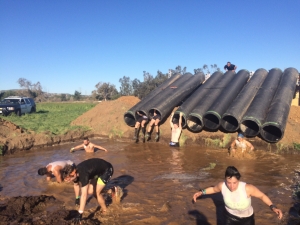 What kind of a sadist puts a long jerry can carry right before a set of monkey bars with loose, spinny bars over a water pit? Clearly, one like BattleFrog’s newest Race Director, Marco Bedard, who designed the Los Angeles course. The massive carry beforehand multiplied the difficulty of this obstacle 10-fold, as racers had to attempt it with pumped up forearms and cramping hands.

Shortly after this was a new twist on an old favorite; the rope climb. The twist was that the rope climb was suspended over water, and you had to use a ring to swing to or reach the rope before climbing it, and then another ring to swing to safety on the other side. In spite of a couple of attempts here, I was unable to make my body do anything more than use it as a Tarzan swing across; the rope was too high for me to get a foot-lock on it, and I opted for the 8-count penalty on this as my first failed obstacle. 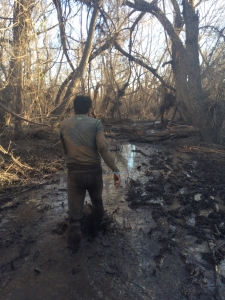 A series of over/unders called the Hump Overs lead to a right turn, into the swamp-like woods on a dirt track. In a clearing were the Caving Ladders, super-thin metal rungs that you had to ascend hand over hand to touch the bell. While this was another failed obstacle on our first round, we’d conquer it on subsequent trips by using teamwork; one person lifting the other's legs while they did the traverse.

Out of the woods briefly to flip some tires and climb an 8’ wall, then back down, and into some real mud. It was amusing watching people try to maneuver to keep their feet clean when we knew what was ahead. The Normandy Jacks were down here, forcing a low crawl through thick soupy mud for awhile. Once we got back to our feet, the trail slipped and slid for a while before firming up again. Next was a pair of shallow water (hip to waist high) crossings of the creek; a welcome chance to wash off the thicker mud.

Now we were down to the last mile of the course. A 50 lb Wreckbag carry wound around, over a 4’ wall, and through some tunnels before you could drop it and proceed to the 12’ rope walls. These are tricky and high, and are one of the obstacles where I recognized a real danger of injury should my grip fail me. 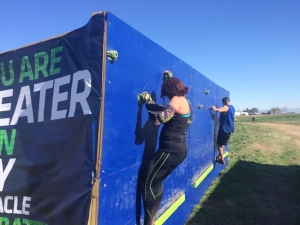 The wedge walls were next, and boasted fairly small rock-climbing holds for your hands as you traversed the outward leaning wall, and then we came up to the Weaver. In San Diego, the square bars of this beast were placed tightly together; here, they were nearly twice as far apart. This made simply grabbing the next bars tough, especially if you are short. The volunteer when we hit this obstacle informed us that we could opt to simply traverse underneath the whole time (as opposed to alternating over and under) for open heats and BFX, and I proceeded to do so. My wife, OTOH, was unable to reach the next bar at all and was forced to do the standard penalty instead.

Speaking of sadists, who puts rolling mud right before the already slippery Tip of the Spear and challenging Platinum Rig 2, placed strategically to dash runners’ hopes with the finish line in sight at the bottom of the hill? Right again, it’s your friendly neighborhood BF race director.

The only difference was, we didn’t cross that finish line. Instead, we took a left turn detour, stopped briefly at the BFX tent to refuel, and set off for lap #2. Then again for #3. And once more for a very slow lap #4. 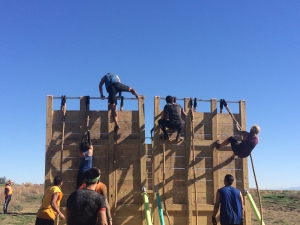 Funny things happen in this kind of event. For me, each lap seemed shorter than the one before it (possibly because it looked more and more familiar), but the obstacles morphed. Obstacles that were tough on the first lap became “Heck no!” on later laps, and even relatively easy obstacles got progressively harder as the day went on. After the first lap, I failed the first Platinum Rig and Tip of the Spear and opted out of the monkey bars. This was the most crowded lap of the day, with numerous open heat racers on the course.

By lap three, my hands were cramping badly on the jerry cans, and for safety reasons I gave the 12’ rope walls a pass, and couldn’t bring myself to do the Weaver. Now, it was only the BFX racers and the morning volunteers who ran in the afternoon heats on the course. 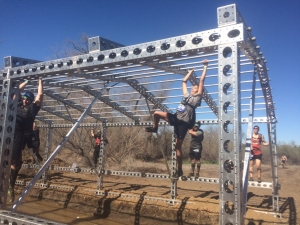 During our 4th lap, we were alone. Many of the obstacles had no supervision anymore (which was ok, we knew what we were doing by now), and the afternoon heats had long ago made their way to the finish line. We teamed up with a couple of other BFX racers and finished several obstacles together using teamwork (including the first Platinum Rig). After many, many 8-count body-builders, most of which were performed without an audience in the name of racing with integrity, we crossed the finish line as some of the very last people on the course as the sun was setting. Four laps, 22.3 miles, ~120 obstacles, and eight hours and thirty-three minutes after we had started. Other, faster racers at BFX put in more mileage, but not all that many. 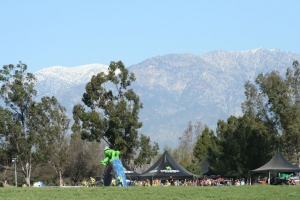 Somewhat disappointing was that Dr. Bronner’s, with their hot shower and soapy foam dispenser, had already closed shop for the day.

I love the challenge of BattleFrog Xtreme, and it definitely won’t be my last. It was a humbling experience to show what I need to work on (grip strength and upper body endurance). One of these days, I’ll make it through a Battlefrog race with full obstacle completion. When that day comes, the next goal is to repeat that on a second and even a third lap.

If you've ever gotten to the end of an obstacle course race and been sad to be done, are training for long endurance challenges, or just want to push your limits, then give BattleFrog BFX a try.

Have you done a BattleFrog?  Leave your own BattleFrog review and feedback…

Use discount code MRG20 for $20 off your next BattleFrog Series registration!