Danny Cheung penned this review below of the 5K Terrain Race outside of Dallas from this last weekend. He and his fiance Lynnae Kettler went to check out the event. Here is what he had to say.

Terrain Race Dallas was an excellent race to kick off our OCR racing season after taking the first two months of 2016 off. The race was held at Village Creek Motorcross in Fort Worth, TX and they offer both a 5K and 10K distance with competitive waves in both distances. We chose the 5K race. I was a bit apprehensive about the race being held on a motocross site because I envisioned endless loops on a dirt course up impossibly steep climbs and barreling down the ensuing declines. Fortunately, that was not the case, and the sections on the motocross course were extremely limited, and there was a decent dose of trail running.

Lynnae and I arrived at 7:00 AM and temperatures were still quite brisk at roughly 50 degrees with the occasional wind that would make you question shedding any layers. On top of that, while shivering and trying to warm up, we learned that the start of the race was to begin in two large pools filled with water. We were dreading a “Shriveled Richard” situation, but there were no ice cubes and the water was only mildly cool to the touch. Thankfully, by race start time it had warmed up significantly and standing in the water with all the other male competitive racers wasn’t so bad. 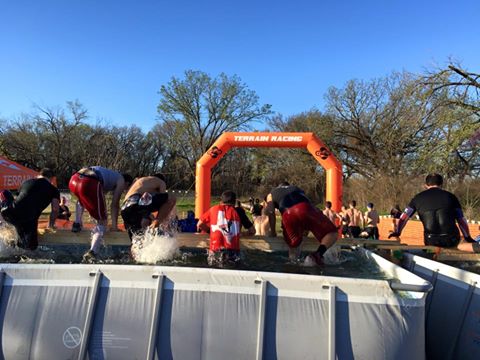 With a few words from the announcer, we were issued the “Go” command and proceeded to climb out of the pools and across the start line to begin the race. The course started with a quick footrace on a trail at the outskirts of the dirtbike track with a moderate climb and leveling off to easy trail running. The first obstacle was a quick an easy five-foot wall, and there was only a minor pause to wait for other racers to get over. We looped back towards the start line/festival area to tackle our next obstacle, the rope climb. We entered the trail section for some running and encounter the first of three long creeks “marches”. The water in the creek was frigid and numbed the lower half of my body. The water would vary between ankle height to roughly hip height, and with an uneven creekbed and mossy rocks, running in the creek was a bit treacherous.

We get out of the creek for a short dose of running before being met with the tire flip obstacle. Standard two flips forward two flips back, and we were on our way. After a short run, we entered another section of the creek for another quarter mile trudge/run in the ice-cold water and emerged to run into the first somewhat challenging obstacle, the monkey bars. The volunteer staffing the monkey bars was also tasked with guiding the sandbag carry obstacle, and could not effectively monitor successful completion at what I would deem the first obstacle with the potential to claim “competitive wristbands.”   I did manage to get across it with only a minor slip. The wreck bag carry was next, which was both graciously light at 25 lbs and short. The only minor challenge was taking your wreckbag through a tube set on an incline in water. 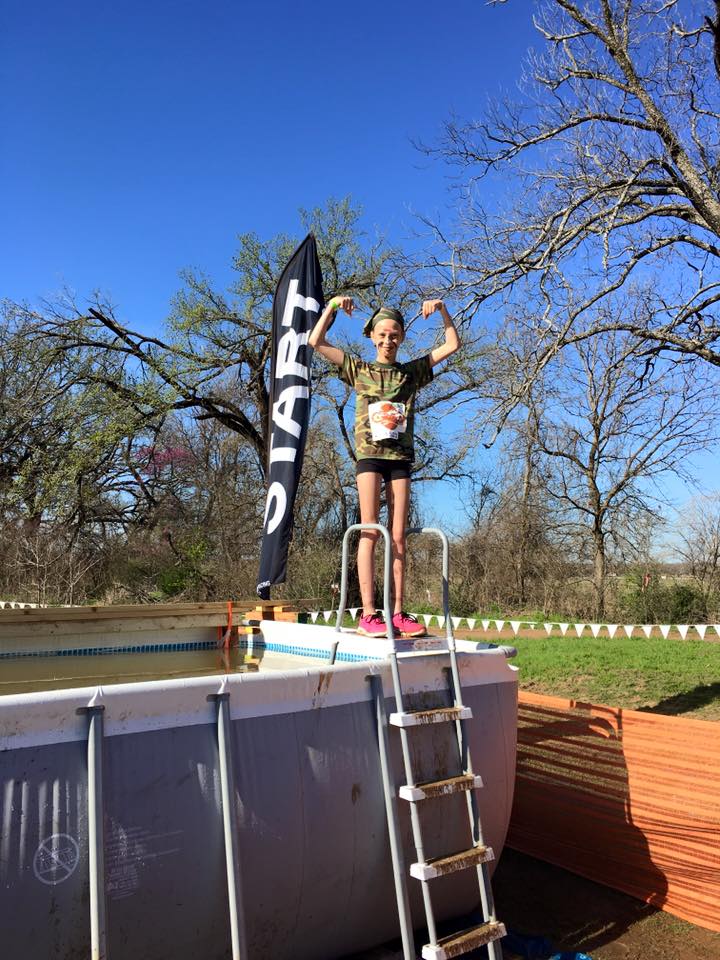 We enter a good section of trail running impeded by a 6-foot wall and steep cargo net A-Frame obstacle. The course was well-marked, and as I came upon the split for the 5K/10K race, there were three large signs exclaiming that this was where the race would diverge. At the fork, there were two walls, one taller wall with 10K painted in huge letters and a shorter wall with 5K emblazoned on it. You clearly could not miss the split.

Directly after the split, it was a short balance beam up to a cargo net obstacle where you had to get across a floppy cargo net and then slide down a pole. This was where I encountered a bunch of dejected 5K racers staring and cursing at the obstacle that stood before us. This was Terrain Race’s version of the rig, which was a rock climbing grip traverse transitioning into “cannonball alley” (think Skull Valley in OCR Warrior with climbing grips and small and medium balls instead of skulls), set over a large pool of water. Failure means you get wet and cold, making subsequent attempts a little harder. There were one conical grip and six ball grips in the 3-ball section, set apart at a distance where you could potentially skip one if you got a good enough swing. I failed the obstacle and stuck around to try additional times. As I stood there, I watched this obstacle claim many competitive wave wristbands. For the girls, only the first place finishers, Jackie Rust in the 10K heat and Lynnae Kettler in the 5K heat were able to successfully complete this obstacle. Fortunately, as the morning wore on, the race director called a run-off for the remaining 10K competitive girls. They only had to complete the rock climbing grip section, drop in the water, climb out and race the rest of the course. At this point, with my hands sore, and arms tired, I gave the obstacle my 6th and final attempt before giving up and running the rest of the course. 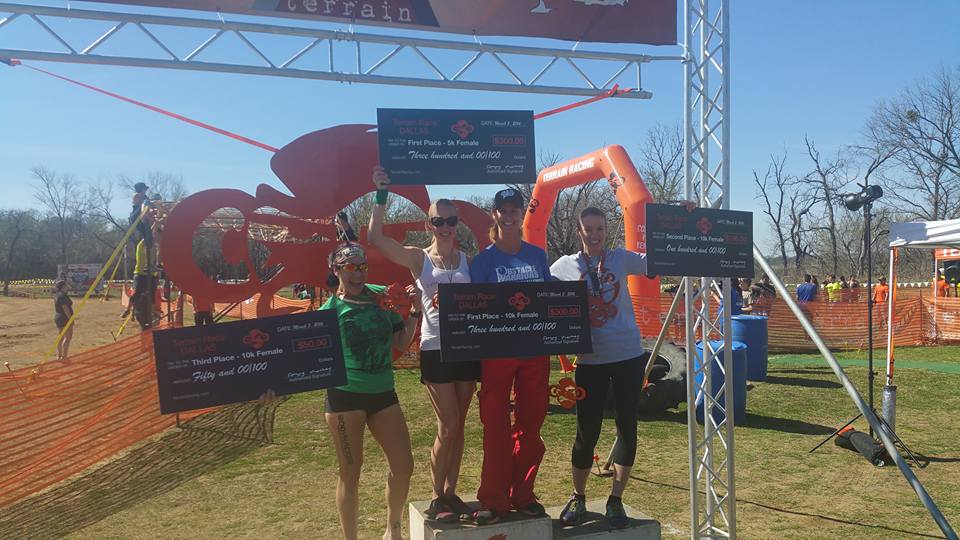 After this obstacle, there was a pond of shin deep water with three tubes to crawl through. With the water filling the lower 3rd of the tube, it made for a claustrophobic crawl. Climbing out of the pond, I was met with a nice flat section of trail running and rounded a corner and down a stretch where a volunteer directed us into the woods. As soon as I crested the small hill, I was met with the darn creek yet again! Back in the water, I went for another quarter mile trudge in the creek. As I get out of the creek, they provided two ropes to help racers climb the steep 20-foot embankment. After that, the rest of the race was on the dirtbike course, with some steep climbs and descents and a water obstacle and a rope-wall to break up the running. The race finished with a small cargo net obstacle which dumped you across the finish line and into cheering volunteers handing out medals and reclaiming timing chips.

Overall, this was a well-organized race with a friendly and caring staff. They were frequently out on the course chatting with racers and making sure things were safe and comfortable. The course itself was very clearly marked with very little chance of error. The race was fun and easy enough for those new to obstacle course racing, with one major challenging obstacle for the more seasoned veterans.

There was two things I wished for, which was a few more obstacles and less or shorter creek crossings. Selecting the 5K race, I was expecting faster running but the creek was about a quarter of the race at that distance. We had a fun day and Terrain Racing’s finisher medals were awesome (the angry monkey spins)!