Spartan: Ultimate Team Challenge moved to its new day and time last night on NBC. Last night's episode, hyped up the friendly rivalry between elite OCR competitors Hunter McIntyre and David Magida. The audience was inspired by Amy Winters and Amy Pajcic team's drive and determination on the challenging slip wall. Today we look at how the show did by the numbers and get the side scoop from two team captains.

The show moved to its new timeslot and day going up against the premiere of Battlebots and the popular reality show Big Brother taking the third place in the 9pm timeslot with 2.6 million viewers with a 0.7/6 rating and share. Next week the show should see a boost in numbers as it airs after the Olympic trials for swimming.

Mud Run Guide talked to two of the captains from last night's episode of Spartan: Ultimate Team Challenge of Team Muddy Minglers and Team Charleston Warrior. The episode featured a heart-pounding finish and slip wall in both the qualifying round and finals. McIntyre led his team to a victory with a team of 40+ year old Spartans who all met online and run Spartan Races together. 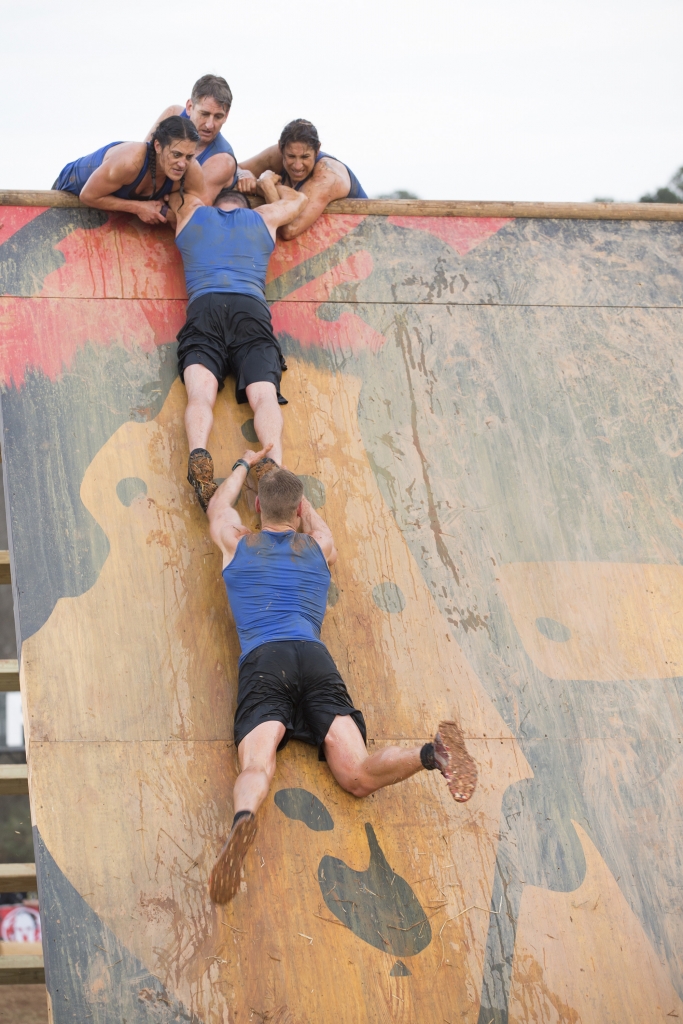 The spartan team challenge is something that I've been dreaming of ever since I started the sport years back. The obstacles were massive and terrifying. Meanwhile, the battles are pretty much neck and neck the entire time.

Tensions were high! Being a team leader to people I never met before was quite a challenge but i didn't think much of it. My approach to this is my same approach to everything. Assume that you're going to win regardless the task at hand. My team was awesome, they were behind me the whole way.

This is groundbreaking for the sport. It's up in the hands of the viewers now!

Being one of the hosts of the Spartan Race show and a competitor in SUTC, how do you see these two different but same entities live together for the viewer? 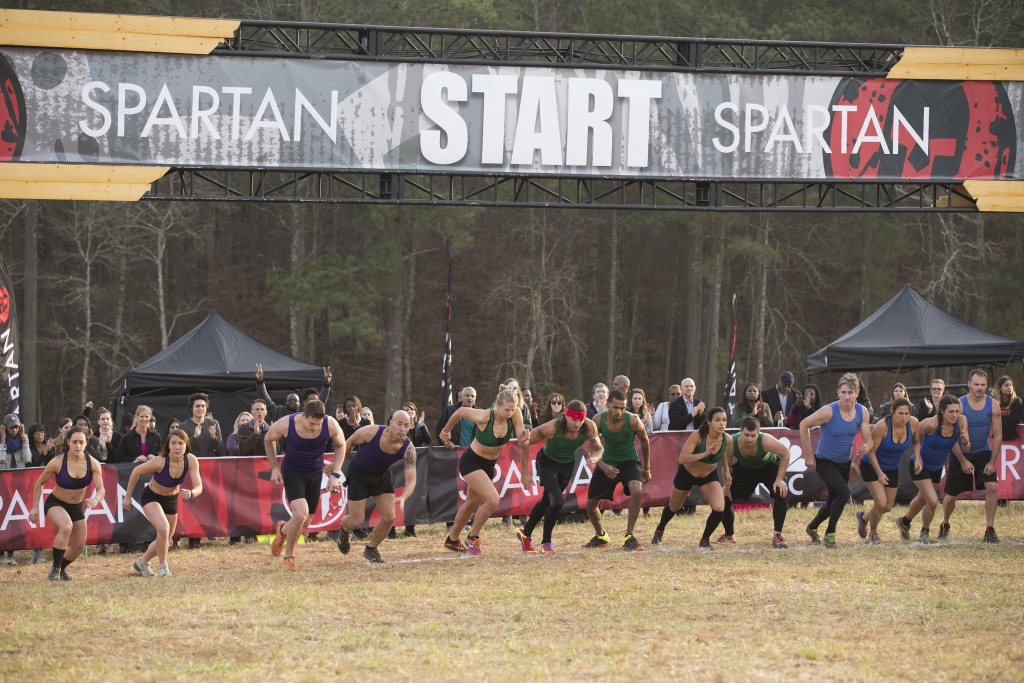 They are different products for different viewers. SUTC is more targeted at entire families. They took the human interest portion of the main Spartan Race show and took it to another level.

I hope it continues to rate high and bridge the gap over to the main Spartan Race show. I feel the original show really does the sport justice. The SUTC experience is awesome, but it's not a true image of the race and sport as a whole.

The obstacles were all new and over the top. It wasn't exactly Spartan. It was more ANW+Spartan on steroids. My main concern is, will this confuse the average viewer and think it’s gimmicky? Why are there sound effects with spears? The announcers not explaining the penalties when an obstacle isn't completed. If we can carry over viewers to the main showcase of Spartan Race, it will help the sport.

The great thing about this show is everyone gives all they had. You (The elite coaches) pull as much of the load as possible. The team was holding on as long as they could, giving everything possible. Everyone gave everything they had, and we all went the same speed. That was mind blowing.

Do you feel SUTC or Spartan Race will have a larger impact with Spartans original goal to rip people off the couch and get into a healthier lifestyle and why?

-One show demos what the sport is, and what it takes. While the other has a huge viewership. They should continue to piggyback from ANW and use that to help grow the sport. ANW fits under the umbrella term of OCR. Is it a race that specifically has obstacles to overcome? Yes. Then it's an OCR. Use ANW to help grow OCR as a whole. Use this to get the word out to get more people involved. Help create something to get people to really take seriously as a sport. ANW is now something that people take seriously. Make obstacle course racing serious, rather than a mud run that you drink beer. Mud running is technically its own sport in Europe.

How do you think this may help and evolve Obstacle Racing as a sport?

This was already similar to the Texas Team Race. This could expand OCR to a whole new type of racing. Get real teams in there, not relay style, with jumbo sized obstacles and make this a full-fledged category to the sport. This would mean teams couldn't really anticipate what's going on and really brings that unknown factor back to OCR. Currently as a solo sport, it's difficult to really innovate with obstacles. You can only get so big and technical before things get dangerous to do solo. Go bigger and require teamwork. Remember, the original obstacle courses were military. They stressed working together as a unit. Make it something new and yet back to its roots at the same time.

Right now Spartan has already gotten to the point of getting trifectas available in every one of their major markets. Then they added on the Stadium Series. Now, why not make a team race schedule? You're automatically guaranteed to bring in a person plus three friends for each seriously interested person. Why would you NOT make this? Call it the Spartan Race Team Challenge. It would be a great idea.

During your time on SUTC, what were your focus areas as the coach for your team? How do you get four people, you've more than likely never met, ready for such a blind ordeal?

I was always a contender during races not because I was amazingly good at it, but because I create plans and follow those plans. We made a pretty aggressive analysis of what to do on every obstacle. We carried out the plan to the T. We made sure utilize the strengths of teammates. They came ready to work, all I needed to do was earn trust. Growing close to strangers that quick is something special. Racing with people creates the bond. Suffer together. Many people who race alone race to win, this was an opportunity to do something unselfish, and I had more fun doing this.

For being one of the elites, there are many people out there who are already quite athletic or are working hard to be. What would you tell someone who is wanting to make the jump from open waves and seriously compete as an elite?

If you want to be competitive and good at this sport, focus on improving running. The best in the sport are runners. Grip strength is paramount. You need to be able to hang, climb and traverse. Your biceps mean nothing if you can't hold yourself up. Finally, this sport is about grit, toughness and the ability to suffer. The best are able to live in a world of suffering, misery.Not only do thrive, but they enjoy it. What I tell all of my clients and those I'm training for racing is:  ‘Right now, there is a storm of pain, suffering and misery swirling around you. You have to be the calm within the storm.'

There has been some chatter online about all the teams running the same-ish course, and that doesn't give much variety for viewer’s week to week. What are some ways you think it would be possible to really mix it up for the viewers? Do you think it may be better to do the ANW approach where there are different courses in regional qualifiers or other ideas?

I liked the course itself and how it was together. I don't think it's been covered as thoroughly as could have. I'm surprised they didn’t show all three races in each episode. They will do what they think best to get the best viewership. We want it painted in the best light possible. They will do the best things possible to get viewers. Next season, maybe create more obstacle variety on the switch points, or have other branching paths to take. I'm just so happy didn’t have to do the totem climb again.

Tune in next week as six more teams battle it out on NBC Thursday Night at 9pm ET.