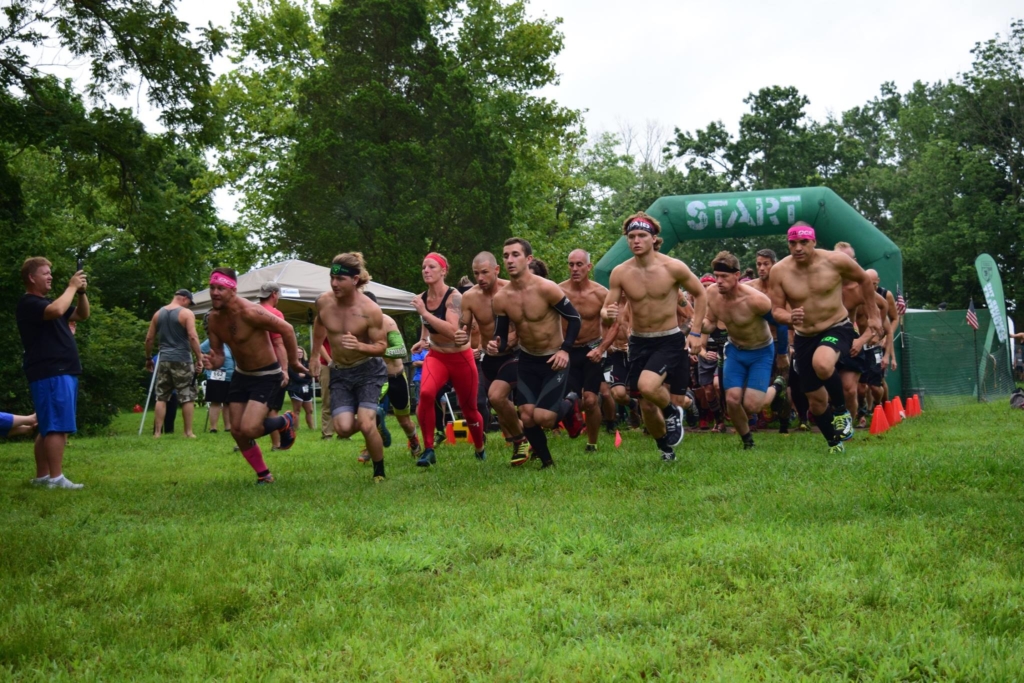 I have been looking forward to Conquer the Gauntlet since the series announced that they would be expanding to have events across the nation this year. I eagerly checked the schedule and found the venue closest to myself; looks like I’m going to Louisville, Kentucky. For those unfamiliar, Conquer the Gauntlet has been in operation since 2012 in Tulsa, Oklahoma with two events and steadily added one event per year from there. At the start of the 2016 season, the company decided it was time to play with the big dogs in the industry and added new venues and a pro team to boot. Advertising has been ramped up considerably, and there’s been a ton of hype over how great the events have been going this year and just how connected their operation has been to the obstacle racing community. To put it lightly, I was excited and found myself exclaiming many times that I was looking forward to the day I got on their course.

I want to preface what I am about to say by stating that I have several friends who are invested in this series in a variety of ways, Pro Team members, course designers, and build crew, this may sting, but alas, it is time to address the elephant in the room.  I left the event Saturday with a bad taste and my mouth and worried about the future of this series. It was very reminiscent of the time I had the displeasure of attending Atlas Race’s final event before they went under. It wasn’t ALL bad, and I’ll be sure to highlight the good as well in conclusion. Those at CTG, please understand that I write this with love.

I’m putting this first to emphasise that safety should be first and foremost. I don’t usually mention safety in any of my writings; our sport presents some obvious inherent dangers and in general, those dangers are managed well. The good news is that to my knowledge; no one went home with any serious injuries over the weekend. The bad news is that it is only a matter of time. I saw more nasty falls off walls at this event then I believe I have over all events the past four years combined. None of which were cushioned by hay bales or straw or any matter of the sort.

The same goes for the “Tarzan Swing” (Rig) and “Pegatron.” You can only witness so many people falling backwards from towards the top of the 12.5ft “Great Wall of America” before you start to question if it worth some medal at the finish line. This course also featured two swims, one of about 60 seconds and the bigger swim at the end which took me over 3 minutes. Neither swim had any floatation device or alternative path for non-swimmers (or participants who may be too tired to safely cross). The first water crossing didn’t have any sort personnel in the lake to aid those who may find themselves unable to cross. All racers were provided were a single rope at each swim with so little tension that it sagged several feet below the surface.

To sum up the crossings, I, an admittedly terrible swimmer who was sucking up lake water and barely keeping my head above water, was told to go back and save a participant behind me when he started panicking from nearly drowning and I know of at least one individual who abandoned the race after a near-drown himself in the first swim. 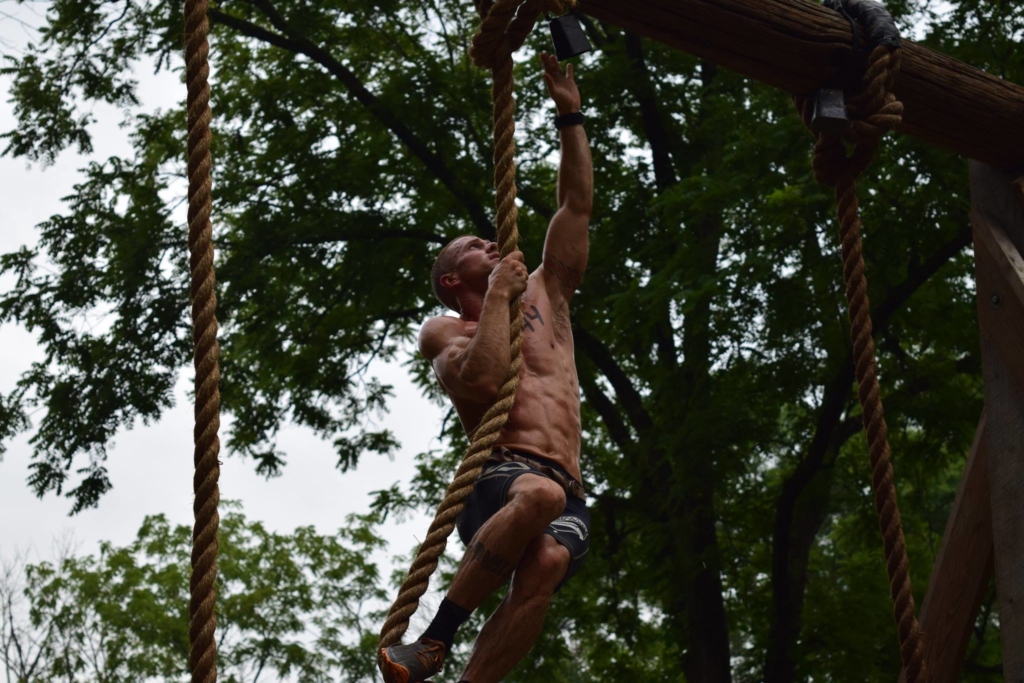 Right from the start, racers shot out of the gate, down a very small hill for roughly 100 meters and were greeted with single-track through a bog. So much for creating some separation, we continued more-or-less in line until the first obstacle and already we were bottlenecked.  I was probably within the first 20 people to this first wall and had to wait in line. Talk about taking all that adrenaline and putting a cap on it.

A silver lining is that the obstacle difficulty that CTG has become known for definitely creates separation, so after that first wall, I never had to deal with more lines. The rest of the course didn’t offer much to write home about, a few creek beds, only one big hill at the log carry, and it was mostly just nature trail running. We were in a state park campground, so I guess it was fitting that it felt like a run on some recreational trail. Also worth noting on the log carry, by the time I got there in what was probably the upper-middle pack of the 8 am elite heat, all the men’s logs were gone.

The carry was not a loop, and the logs were not returning. Instead I was instructed just to grab one of the few logs left, odd enough in of itself, but then after what felt like an entirety carrying it down the recreational trail I approached where the men’s logs were being dropped off and was instructed to switch out to the bigger log and go up the hill for a loop. I have no clue what they did for later heats or did we just do the work for the crew? Did we carry the logs TO the log carry? Either way, it left me at a loss for words. 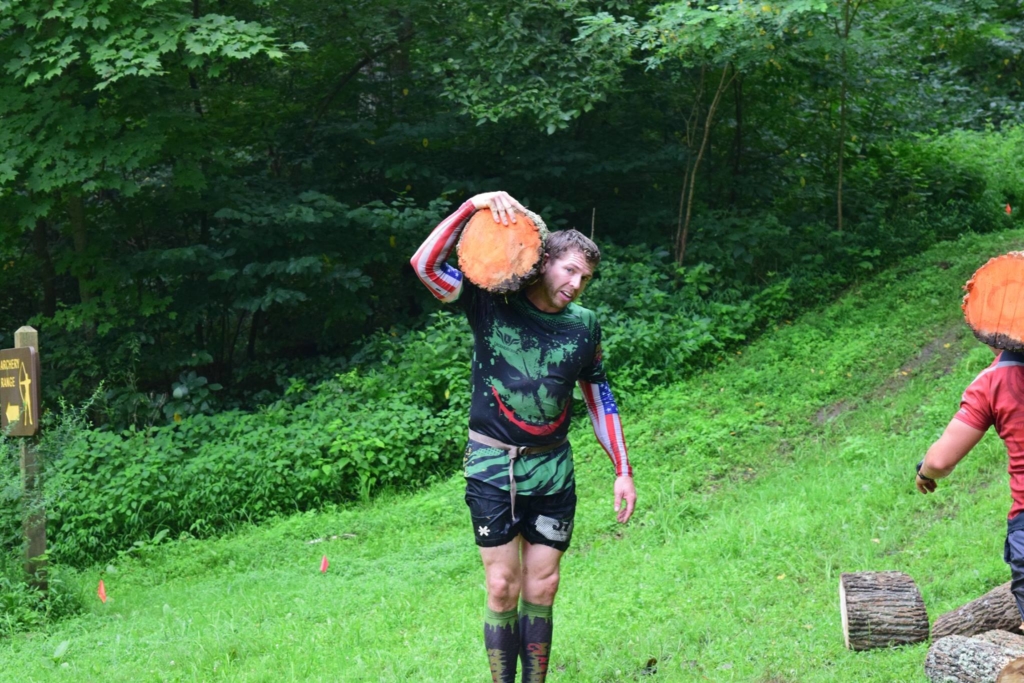 The Obstacles and Difficulty

Conquer the Gauntlet is TOO HARD. Go ahead, grab your pitchforks and matches. I said it, and I will stand by it. Call me a wuss, say I’m just still reeling from the butt-hurt; that’s fine. I find it odd that currently, the masses seem to be praising the series for extreme difficulty while at the same time Battlefrog took heat for being “too elite” for the Average Joe or Jane and as such have had to make an effort to dial it down to attract participants.

Where’s the missing piece to this puzzle?

On their website, they list two “Pegatron” as having a “2% Conquer Rate” for successful completion, from what I saw in Louisville that is not a stretch in the slightest. “Stairway to Heaven” sounds like a slice of heaven in comparison with an “18% Conquer Rate.” The website advertises four obstacles with under a 50% rate. This has led to several CTG events without full podiums (of which you need 100% obstacle success to qualify).

All this adds up the very real possibility of a participant only being able to successfully complete one or two obstacles on the course, and I can’t imagine that being a worthwhile experience. Average Joes, sorry about your luck. Keep in mind; it is that very group of weekend warriors that foot the bill; I just don’t see this a sustainable path. They’ve already had to cancel events due to lack of registrations and taken heat for not being able to refund those who had paid. (here)

On a related note but only relevant to the competitive field was the inconsistency throughout. Lanes on walls were notably harder than others, a lane on the rig had different apparatuses, ropes were all different lengths and thicknesses, and rules seem to change on the fly (although grabbing volunteers off Craigslist didn’t help that last point) 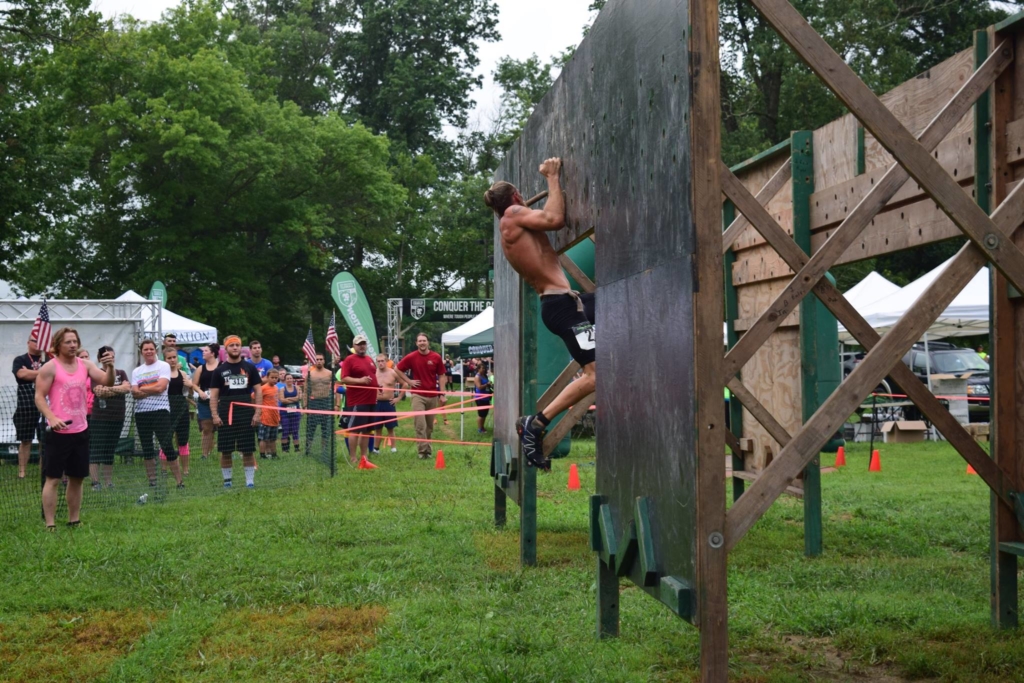 Um, what’s that? There was a start/finish line, the required tents (registration, finishers, results), the merchandise tent, port-a-johns, and the podium/photo wall. No food, no beer (although I welcomed that not being present), and nowhere to change out of your wet or muddy clothes after the race. I did find a hose laying on the ground; the verdict is still out as to whether that was the official shower station or not….

Every night has a dawn, and every event has some things that give me hope. What I see with CTG is a terrific opportunity to improve. Without a doubt, these were the most unique obstacles I have seen in the past four years. Even things as simple as walls were taken to crazy and interesting new levels. A few small, simple tweaks to bring down the overall difficulty and we’d be looking at a home run.

The finisher’s medal and finisher’s T-shirt are top notch, and the offerings at the merchandise tent are exceptional and overall reasonably priced.

And finally, the crew and staff are by far the most friendly and personal I have ever seen. David Mainprize and crew were there from start to finish and were happy to talk to all participants and did as good of a job as possible addressing issues throughout the day. It is my hope that they will bring that same attitude while reading this article. If CTG is to survive and flourish, it will be on the backs of this grassroots staff.

Jason Rulo attended the same event and had a different take on the race. Read his race recap here.