In case you missed it, recently at the Spartan World Championship, Spartan made (what I viewed) as a big deal about having United States Anti-Doping Agency (USADA) at their event.  Instead of drug testing, like I expected them to, they were there just to inform all the elite athletes of the rules.  A definite step in the right direction, although I think I would have preferred advising and testing all in one move.

As always, it is the athlete's responsibility to educate themselves on the rules.  What shocked me, though, a couple of weeks later, it is almost as their brand had already lost sight of that goal or perhaps, more likely, the people that handle event sponsors are not coordinating with the overall vision for the company.  Specifically, I am referring to the recent Glen Rose event that had Spartan Race partnering with an IV company: 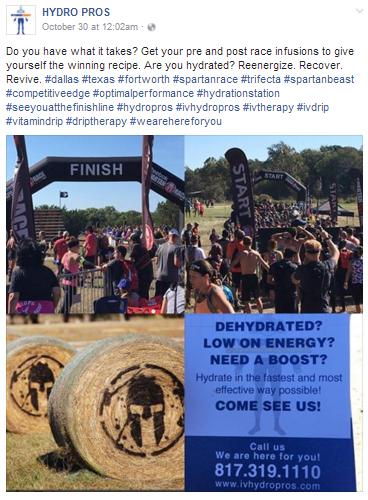 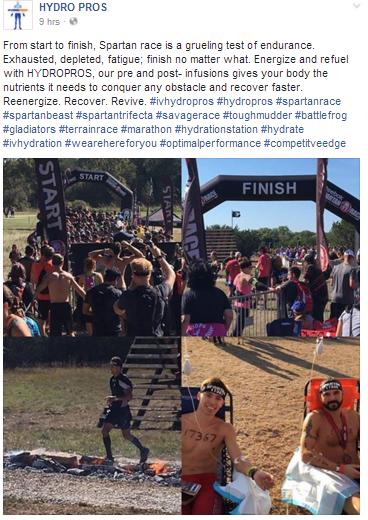 It is just rehydration with saline and maybe some vitamins depending on what package you purchase, what is a big deal right? Well…now read this link from USADA:  Is it prohibited to use IVs for rehydration and recovery?

If you are not interested in reading the full web page (which you should), the short answer is this: All IV infusions and/or injections of more than 50mL (~3.4 tablespoons) per 6-hour period are prohibited unless medically necessary.  (I abbreviated that, please read the whole link and my entire article before you share your opinion online).

This is not something off a random Google web search; it is from USADA’s actual page. If you are an Elite and competing in drug tested events that abide by USADA or World Anti-Doping Agency (WADA) then read the next couple of lines carefully.  You can’t go to a Spartan Race (or other company's race) and get an IV because you think it will help if it is not medically necessary. If you are running in the Age Group Waves of OCR World Championship, you are held to the same rules.

Maybe they are only administering 50mLs of fluid like the exemption allows for…nope, try 500mL.

I’m not here to argue if taking IV fluid should be banned.  We can discuss that at another time.  I’m simply here to inform you that based on the current rules, it is prohibited minus medical exemptions (ex. Therapeutic Use Exemptions/TEUs, urgent medical care).  If you have an issue with the IV ban please take it up with USADA and not me.  If you are wondering why ban IVs, the abbreviated version is USADA sees an issue with the method and not the substances that are injected.

IV hydration can be used to expand blood volume quickly thus doing things like hiding other banned substance and rapidly lowering hematocrit levels, which helps hide signs of banned substances/methods  (like blood doping or EPO use).  You can also conveniently add banned substances to an IV bag since it is already flowing directly into your veins.  However, just to reiterate, I’m not here to argue if it should or shouldn’t be allowed, just informing you that is not allowed.

What if you are an open wave competitor?

Then yes, you can get an IV just because you want one.  That means that 90+% of the people at the race can probably take a voluntary IV without breaking any rules because last time I checked they don't have to abide by USADA rules.  In fact, if you are not racing in the Elite/Pro wave of most races than you can do whatever you want to your body.  Just take a look around at the start line of a big race and see the 240 lbs. guy with 6% body fat and veins in his abs (<-steroids or a mix of other banned substances).

This is not meant to be a bash on Spartan article.  Without Spartan the industry of OCR might not even exist.  They have done a tremendous amount for the sport from ripping people off the couch, producing TV shows and generally raising the profile of OCR.  I'm only using Spartan Race  as the example in this case.  In fact, Savage Race did the same thing at their Houston event partnering with the same company a week after the Spartan Glen Rose event.

I reached out to Ian Adamson the President of the Obstacle Course Racing Federation (OCRF) and he had this to say after reading the article:

In the opinion of the OCRF, IVs for re-hydration are not acceptable for elite competition as it effectively provides an ergogenic aid. Our medical advisers are clear that once an athlete takes an IV pre-race or during a race, they should be eliminated from rankings in elite competition. In my opinion (as a former professional athlete and practicing medical professional with an MS in Sports Medicine), IVs should only be used under medical supervision for medical reasons. Doing otherwise increases risk of infection and is unfair to competitors who look after themselves and don’t have the money or inclination to use a medical procedure for performance reasons.

I also reached out to Joe DiStefano from Spartan Race and sent him an advanced version of the article. He declined to comment.

If we (the OCR world) want to elevate our sport to an Olympic level, we need to understand the rules.  Spartan Race  and Savage Race are not the only ones who have partnered with companies I have viewed as questionable.  Tough Mudder is partnered with Cellucor, which I used to view as a questionable relationship due to previously having several products with banned substances (ex. CLK, C4 Extreme).  As of this writing, Cellucor cleaned up their CLK formula (removed 7-Keto DHEA, a listed anabolic substance often found in fat burners) and cleaned up their C4 Extreme formula (which contained a banned stimulant Methylhexaneamine in 2012).  As far as I am tracking now, all of Cellucor's products are currently clean but that's just off a preliminary glance based

As of this writing, Cellucor cleaned up their CLK formula (removed 7-Keto DHEA, a listed anabolic substance often found in fat burners) and cleaned up their C4 Extreme formula (which contained a banned stimulant Methylhexaneamine in 2012).  As far as I am tracking now, all of Cellucor's products are currently clean, but that's just off a preliminary glance based on the labels.

Companies are always adjusting formulas, so it is important to do the research yourself and don't just take my word for it before ingesting supplements.  For reference, fat burners, pre-workout, and testosterone boosters are the supplements most likely to contain banned substances.

Can OCR companies still partner with companies that offer banned substances or methods?

If it was up to me, I would say steer clear of those partnerships.   It is too easy for people to assume all of their products are okay for everyone.  However, it is not without precedent in the sporting world.  Just look at pro cycling and some of its sponsors like Amgen sponsoring the Tour of California.  Amgen used to make erythropoietin/EPO the drug famous for boosting cycling performance (via increasing red blood cell count).  Besides EPO, Amgen also positively affected millions of lives with life-saving drugs through the other drugs they produce.  I imagine a lot of you are thinking that cycling is a “dirty” sport, but that is a digression that could fill a book and for discussion elsewhere.

If companies are dead set on partnering with banned substance/method companies there are work around ways.  For example, if the IV booth had a large sign that informed athletes that they might be violating rules if they run in the Elite wave or if they made them sign a waiver that was just one sentence long, then that could be okay.  The other option is just telling athletes they should have known better.  If one of the Elites sits down for an IV pre or post race, will someone from Spartan report them to USADA, DQ them or ban them from future competition on the spot?

Tough Mudder and Cellucor only distribute approved banned substance free formulas at their events as a workaround.  In the end, they leave it up to athletes to know the rules when they walk into their local supplement shop of what they should not take.

The bottom line is this:

If we want to take things to the next level, people need to take some personal accountability and understand the rules.  Simultaneously, the companies should monitor who they partner with carefully looking at the long term benefits of their partnership to their brand and to the sport.  We still have a long way to go, but let's try to continue moving in the right direction.  #cleansport #drugfree

-From USADA: Is it Dangerous for Athletes to use IV for rehydration and recovery?

0shares
Disclaimer: The viewpoints expressed by the authors do not necessarily reflect the opinions, viewpoints and official policies of Mud Run Guide LLC, or their staff. The comments posted on this Website are solely the opinions of the posters.
By Evan Perperis|2016-11-23T13:48:22-05:00November 23rd, 2016|Op-Ed|1 Comment