It’s Thursday, February 16, 2017 – I’m Margaret Schlachter and this is OCR News Weekly brought to you by Mud Run Guide.

Our top story this week begins with Tough Mudder.

Tough Mudder was recently named one of the 10 ten live event companies by Fastcompany in the yearly ranking.

Toughest Mudder will be the primary method for Contender Qualification at WTM ‘17.   There will be an application process released in the coming weeks which will outline how and where to submit an application and the past -or- relevant performance required to enter into this category at WTM ‘17

Elite contender category will have the same perks as Contender, plus: Elite Bib and eligibility for Bonus prizing at WTM ‘17

Is now extended to include both Individual Female & Male categories

A bonus prize of $5,000 will awarded to the winning participant/s in the Individual Female & Male categories if they reach 50 miles (or more) at a 2017 Toughest Mudder event.

Individual Female and Male prizing categories have been increased and extended to 5th place to:

Will be awarded at the WTM 2017 – Carb Load Dinner

Finally, the Tough Mudder CWSeed Series ended last week with the one-hour Tough Mudder special – The Challenge Within – that aired Tuesday February 14 on the CW network. The special took the 5th spot in the ratings behind NCIS, The Middle (ABC), The Wall (NBC), New Girl (Fox) as the top rated cable show in the timeslot according to the Neilson ratings.

Find a Tough Mudder Near You and Save.

Evan Perperis's Article on the News

Find a Conquer the Gauntlet Near You

The fourth edition of Spartan Race’s AGOGE took place over the weekend in Pittsfield, Vermont. The 60-hour endurance challenge had an extra challenge as a cold front blew through the area over the weekend with temperatures well below zero. The variable weather started with the bitter cold on Friday then a majoy storm dropped 16 inches of snow, making the turnout smaller for the event. The wind picked up during the day Friday, as the participants went for a horseback trek and the rappelling segment of 004. The average temperature during the entire event was between 5-15 degrees as the participants trekked around Vermont.

Approximately, 60 participants registered. 28 started the extreme endurance challenge and 18 finished walking away with a AGOGE finisher medal and slice of the Spartan Race trifecta pie.

Facebook was a blaze with comments after obstacle race company The Urban Trails took over the old BattleFrog Series facebook and other social assets on Wednesday afternoon. BattleFrog ceased operating a few months ago and sold off all the assets. The Urban Trails which held one event in 2015 acquired Battlefrog’s social assets and rebranded the facebook page on Wednesday. Wednesday saw a flood of comments on the Facebook page and a fair amount of confusion. Urban Trails put out this statement:

The Urban Trials series of obstacle races announced the acquisition of tangible and intangible assets from the recently closed BattleFrog Series.

“I’m pleased to announce The Urban Trials has acquired a significant amount of assets from the BattleFrog Series, which ended its operations at the end of 2016,” said Daryn Hillhouse, CEO and founder of The Urban Trials. “This acquisition allows us to expand our vision of staging an incredible, mass participation, family-friendly, obstacle fun run series, and we look forward to welcoming all the BattleFrog fans to the Urban Trials brand.”

The negotiations with BattleFrog management were conducted by Mr. Hillhouse and Garnet Heraman, an Urban Trials board member, and strategic advisor. “The acquisition includes tangible assets such as state-of-the-art aluminum obstacles, as well as certain intangible assets such as the BattleFrog Facebook company page,” said Mr. Heraman. “This gives us a great head start on establishing a national footprint in 2017.”

The Urban Trials has it all: 15x entry-level obstacles, and awesome mental challenges, infused with technology. This is the first ever event to be powered by a smartphone app, which participants will use to look for codes, search for clues, test their memory and solve puzzles, all while getting some healthy outdoor exercise!

This is not the first time that assets from one race organization were sold to another. Superhero scramble sold off all their mailing lists and other items after they closed shop. This is however, the most visible transfer of assets between companies to date. Currently, Urban Trails is slated for five events in 2017 in Ohio, Kentucky, and Indiana.

Heading over to Europe:

Obstakels.com and the Dutch Mud Men hosted the Dutch OCR Awards over the weekend. Dirk Schrema and Gertjan Van Voorden worked to bring together this event. Mudstacle, the United Kingdom-based OCR media site, was on hand for the awards ceremony and said this of the ceremony:

There were nine awards in total and, inspired by the Mudstacle awards, in each category the top three nominations were announced before the sponsor read out the winner. We had sponsored the ‘Muddiest Event’ award and got to hand out the prize and coincidentally enough it went to the guy from Strong Viking that I was sat next to!

The winners of the night were.

Over the weekend a few races took place around the world and we have those results for you.

South Africa kicked off their obstacle racing season with Toyota Warrior Race taking place in Legends MX. The weekend featured a number of events with several divisions. Warrior Race is the premier series in the country. The race is a qualifier for the OCR World Championships. The top results in the Black Ops Elite division on Sunday were.

Moving to the United Arab Emirates, the Sandstorm MARMOUM took place outside of Dubai over the weekend. The race featured impressive obstacles and drew athletes from around the world to compete in the desert. Members of the OCR World Championship team were on site to evaluate this new OCR World Championship qualifier. Top finishers on the 10K course included. 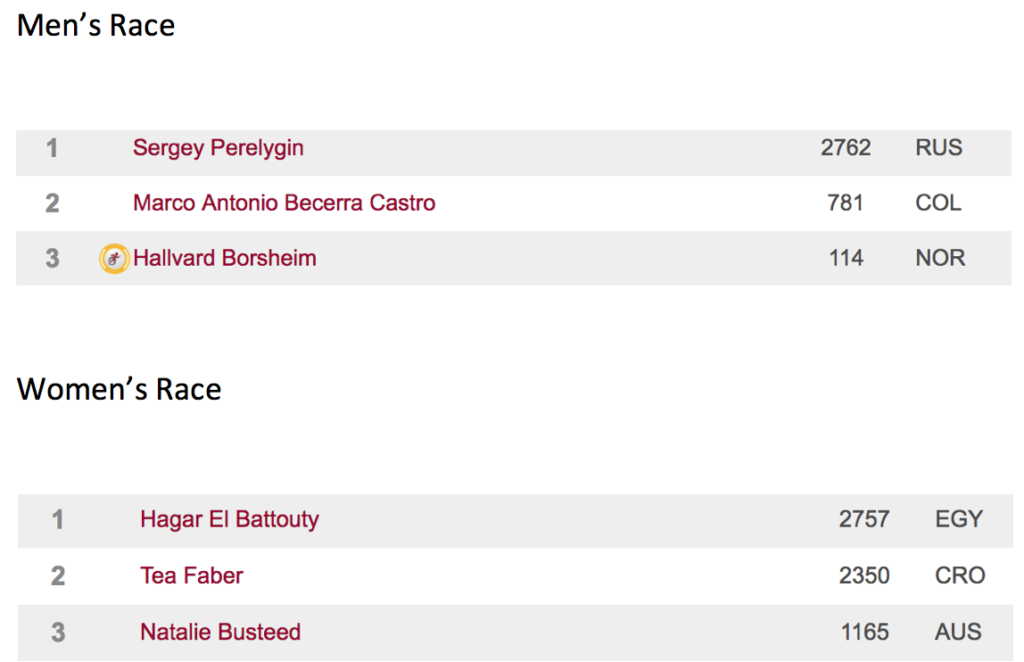 Those are your headlines this week from around the obstacle racing world.

If you liked what you heard subscribe to the show today and never miss the top news from around the world of Obstacle course racing. Please leave us a review on iTunes, Stitcher, of whatever your other favorite podcast player.