A lone sentinel stands guard over the sole surviving bastion of full-time OCR in the southern half of New Jersey.  ABF Mud Run is a shell of its former self.  Some moved to Texas.  Others like myself are still out there rucking from place to place looking for a home base.  Some moved to South Jersey OCR.

Nominated in 2015 and 2016 as Best OCR Training Facility, James Schissler’s South Jersey OCR is a stop worth making.  This is a man who makes good on his core values: “Lead by example.  Do what you say when you say you are going to do it. If you don’t, own up to it.  Do the right thing when nobody is watching.  We don't want to tell you about us, we want to SHOW you.”

James and his crew showed me and my friend John around what he called the “Clock of Death”.  Twelve workout stations featured various Wreck Bags that worked every part of our bodies.  This is what he called an easy day.  The gym was fully equipped with just about everything else you need for OCR training: walls, ropes, pegs, rigs, spears, balance beams, and of course, your own body weight.  James is a big believer in body weight training, especially running and anything else aerobic. 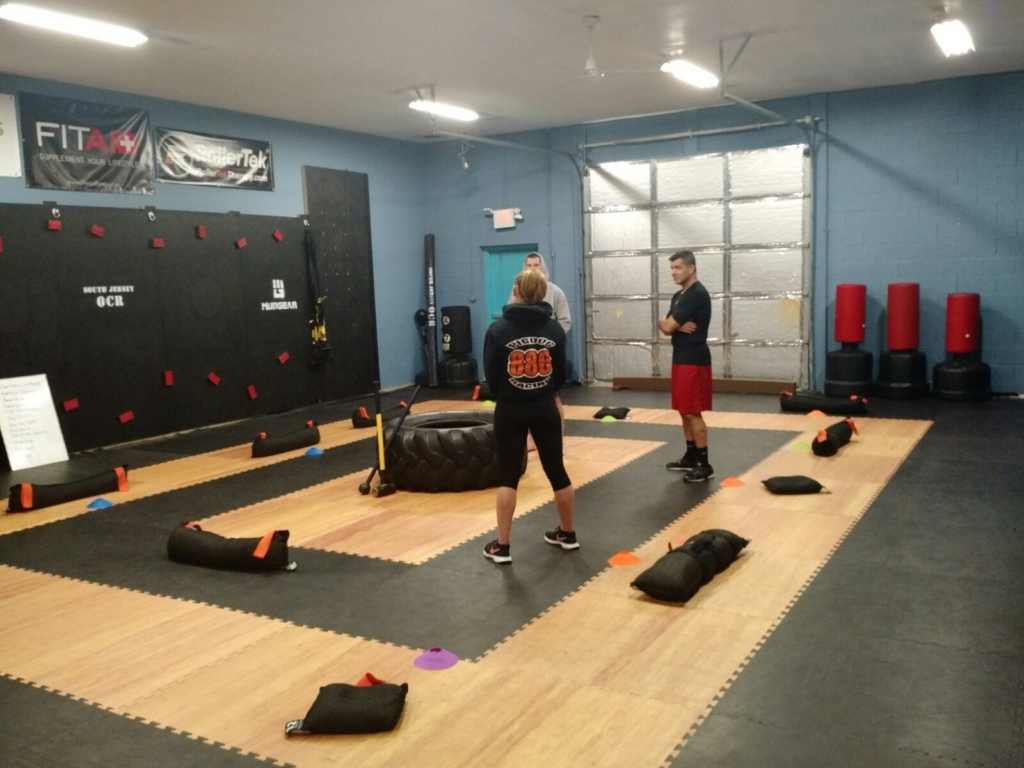 The Clock of Death

They’ll take on Boxes, Marines, and local gyms full of heavy lifters.  They set up a short circuit called the “Chipper”.  Each participant started with a set number of burpees.  Then they ran up to and got over a military wall, run, did another wall, then finished with another set of burpees.  Then they did it all again.  Just running and simple bodyweight stuff right?  Guess who won every time?  South Jersey OCR.  There’s a rumor in OCR that biceps win races.  I think James will tell you that legs and lungs win races.

There’s more than running that puts fuel in Schissler’s tank though.  He is an Army brat, born in Atlanta, transplanted to South Jersey.  The military way of life is in his blood.  He serves the Services and uniforms through many charity events.  It is his giving spirit that makes SJOCR hum and makes the charity events so special. 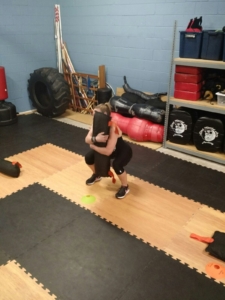 He just wrapped up the Fallen Hero Challenge last month, running every day the number of miles equal to the number of fallen uniformed personnel from a given state that day.  Although he has not met any of the scholarship recipients from this foundation, he did get a lot of face time with the Toys for Tots event sponsored by the United States Marine Corps.

Two local families were chosen as recipients.  They provided a list of things they needed including clothing sizes and gifts.  The donation day was intensely moving for James as he understood the struggles of families who have so little.

Wreck Bag around the world

Another particularly meaningful event happened when the City of Philadelphia called James and asked him personally to set up a WOD in honor of Robert Wilson III on the second anniversary of his death in the line of duty.  James makes it a point to follow up with all the organizations he supports throughout the year.

The homeless of Rucksgiving know him by face and name and look forward to him and his team showing up each year bringing food, clothing, shelter, and joy.

He gets emails and voicemails to follow-up every day.  Some people call looking for advice on how to set up a WOD or some other charity event.  Don’t shortchange the work.  It takes about nine months to plan and pull one off.  Other calls may be the veteran’s suicide hotline.  James is a trained professional here, able to talk Service men and women down from the 22 statistic.  Thanks to his help and others like him, that stat has shrunk to about 20. 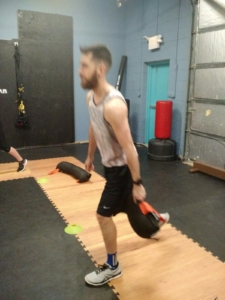 Along with South Jersey OCR and daily charity work, James also has a full-time job and a toddler daughter.  He plans to keep going full intensity by “finding a group of crazies” and eating right.  His daughter is right behind him having already teethed six choppers without shedding a tear.  We made a friendly bet on whether she would cry the next day when she got her ears pierced.  The picture shows that she only welled up but the tear never fell.  So we split the winnings.

James is not a lone ranger.  His SJOCR team is right there with him at many events.  He had over one hundred participants at a Veteran’s WOD last year.  His was the third largest team in the nation.  His draw included online ads promising bling, food, and fun.  The man of his word delivered in full.

His other military ties include training USMC recruits before they go to Boot Camp.  He keeps up with the latest Marine Corps requirements by bringing his team to a local training camp.  Other times, the Services come to his gym to participate in the WODs.  One time two active duty members DNF’d.  A local TV crew was there to capture it all.  Schissler’s secrets to keeping the flame hot are to train in zones 1 and 2 for his charity WOD runs.  Now that they are over, he starts to ramp up the intensity as race season approaches.  He’ll use Tailwind for endurance. 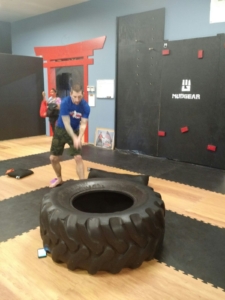 Does anything scare him?  So far, his worst experience was having a shoe fall apart at the beginning of Palmerton last year.  His team and he agreed that the forty-foot vertical ladder at last year’s Brooklyn CMC was pretty scary.  From forty feet up, the net looked awfully small.

As stated on his homepage, “EVERYONE is treated EQUALLY and EVERYONE is WELCOME.”  He’ll work with all levels and give time to those who want to turn it up a lot.  Classes are at 5am during the week and 7am on weekends.  If that doesn’t work for you then that’s OK.  But like so many of us OCR veterans found out years ago, we work out in the morning for a reason.  Even if we are not morning people, no matter how bad it sucks, there is a good reason.  Many of us from the South Jersey/Philadelphia area started our OCR experience at Palmerton.  We chose afternoon start times.  By then the temperature outside in full exposure of the sun on the face of that mountain was well over 100-degrees.  Lesson learned.  From now on, we workout and race in the morning.