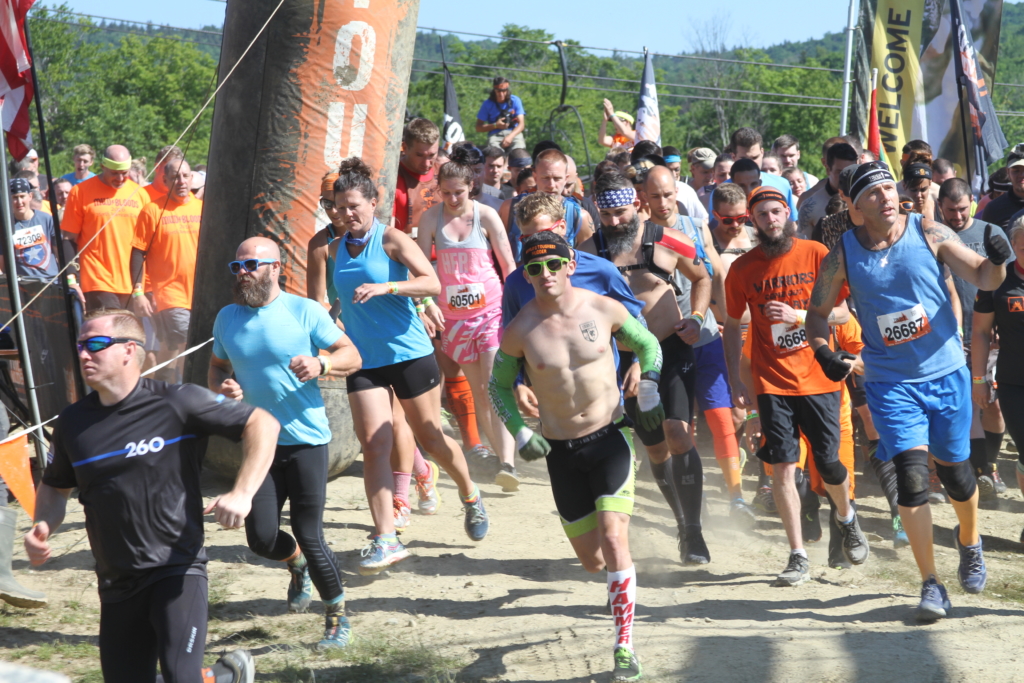 Earlier this year, Tough Mudder announced Tougher Mudder, a timed, competitive heat added to select 2017 TM venues. Today, Tough Mudder HQ officially released more information and dates regarding where you can participate in this new, competitive heat as well as some insight into the $350,000 prize purse that will be won this year at Tougher Mudder. Mud Run Guide sat down with members from TMHQ to learn more about the new offering, but before we get into these newest updates, let's recap all the different offerings that Tough Mudder has on-tap for athletes of all types throughout the 2017 season:

Launched in 2010, the first Tough Mudder in Pennsylvania was technically “timed” as there was a running clock at the finish, but very quickly TM's brand's differentiator from events like Spartan Race and Warrior Dash was their lack of timing, Tough Mudder moved forward as a challenge, not a race with great success. Over the next few years, the brand exploded internationally, as did Spartan and WD with the former adding specialization of distances in the form of Sprint, Super, and Beast (as well as Stadium Sprint, Ultra Beast, etc.) while Warrior Dash dropped their timing entirely, while still offering a competitive heat in the morning.

Tough Mudder has continued their brand dominance both inside and outside of the world of OCR; the best test is starting a conversation about the sport with anyone who's never participated in a mud run: “What, do you mean those Tough Mudders?”

A Mudder of Another Color: Mudder Legion

Aside from picking up some new, colorful headband options for multiple TM's under your belt, Legionnaires get other on-course perks:

You are automatically entered into the Mudder Legion after completing your first Tough Mudder, but will need to check in at registration (or wear your last TM headband) to receive your next level/color. Mudder Legion is for life, and TM finishes continue to accumulate on a lifetime basis. 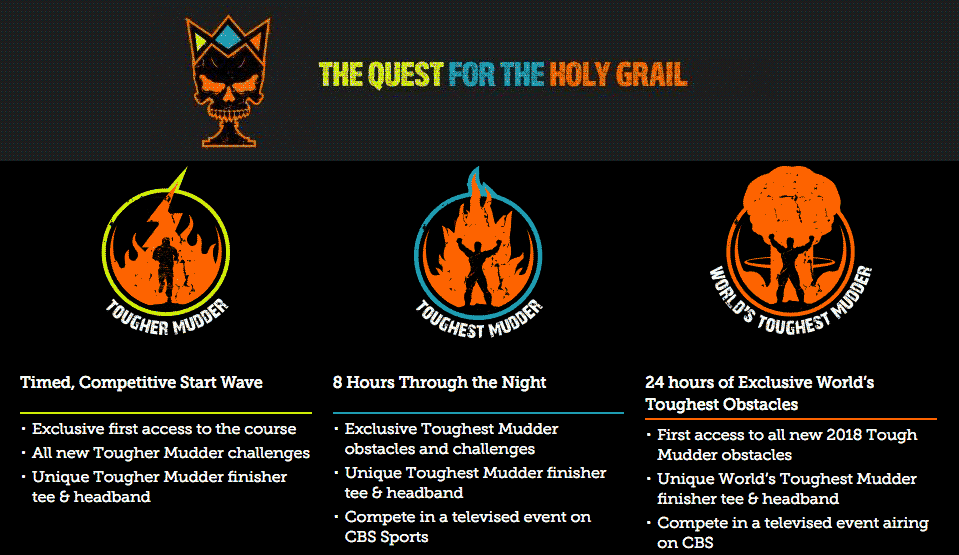 Along with the ultimate bragging rights, achieve the Holy Grail and you’ll get:

I got to (virtually) sit down with two of Tough Mudder's Senior Directors of Product Design, Nolan Kombol and Eli Hutchison. During the Skype-challenged conference call (yes, it would have been a video to watch, had our mutual technology cooperated) both remarked that the Tough Mudder HQ team created Tougher Mudder based on the success of the CBS specials featuring the 2016 World's Toughest Mudder and the groundbreaking, record-setting streaming online. Hutchison said they have received a flood of interest from new and existing athletes looking for the competitive side of the sport. By adding Tougher Mudder to their lineup, they can offers a ‘stepping stone' to Toughest Mudder and ultimately World's Toughest Mudder.

Below are a few highlights from the call along with some additional information regarding the rules. For the full press release see below.

Tougher Mudder will be a heat at the beginning of the day of the Tough Mudder events. Unlike the rest of the heats for the day, Tougher Mudder is actually a competitive, timed race. This gives athletes looking to test themselves beyond just the initial challenge and offers those with a racing mindset to take on a Tough Mudder course, for time, placing, and money.

Kombol also noted that Tougher Mudder participants will face some unique challenges in addition to the obstacles along the course. In order to receive a Tougher Mudder headband, you must complete all the obstacles, and retain your wristband. For those who lose their wristband, they will receive a regular Tough Mudder headband. The course will be marshaled by Tough Mudder staff and volunteers.

Prize money totaling $1,700 will be split equally for both men and women for Tougher Mudder races:

In advance of the announcement, we reached out to the team at OCR World Championships. They confirmed that Tougher Mudder will be a qualifier for the OCR World Championships. The OCRWC team will evaluate the exact criteria for qualification following the first Tougher Mudder on March 18th and will announce via social media as well as on their website, and participants at the New Orleans 3/18 event will be retroactively qualified for the 2017 OCRWC after the final criteria is announced.

With the addition of this new heat (Tougher Mudder) added to regular Tough Mudder events competitive athletes now have a new way to test themselves on course. Additionally, this will allow Tough Mudder participants to catch a glimpse of the competitive side of the brand. It just might encourage more participants to take the leap into the Toughest Mudder events and ultimately World's Toughest Mudder.

Ultimately, this additional heat will open the door to new competitive athletes and can only help to be a feeder to their longer races.

Tough Mudder will debut its newest competitive event series, Tougher Mudder, at events worldwide beginning in New Orleans on March 18th. The next evolution of the company’s event series, Tougher Mudder is a competitive start wave that will be held at every Tough Mudder Weekend in 2017, and the top three male and female winners will be awarded prize money. With the addition of the new event series, the leading active lifestyle brand will be offering more than $350,000 in prize money across its suite of competitive series in 2017.

At World’s Toughest Mudder 2017, more than $150,000 will be awarded during the grueling 24-hour endurance competition, which is being held at Lake Las Vegas on Nov. 11-12, 2017. The Toughest Mudder series, six global, eight-hour, overnight competitive races, will bestow more than $100,000 in prize money during its inaugural season.

Tough Mudder, Inc. is also launching Tough Mudder 5K in Nashville on August 12 to meet the growing demand of metropolitan people who are attracted to mud runs, as well as to serve as an entry point to obstacle challenges. The 3.1-mile event will provide an accessible yet rewarding challenge within a city and will feature more than 10 signature Tough Mudder obstacles, excluding the more extreme elements, like ice and electricity found in the Tough Mudder signature event.

“Tough Mudder is thrilled to debut three new event series in 2017 – Tougher Mudder, Toughest Mudder and Tough Mudder 5K,” said Will Dean, CEO and Co-founder of Tough Mudder, Inc. “We remain dedicated to innovation and the development of new products and entry points that enable millions of people around the world to be part of Mudder Nation, furthering our position as a global leader in the active lifestyle and endurance sports categories.”

World’s Toughest Mudder – Competitors are eligible for more than $150,000 in total prize money. Individuals can win bonus prizes of $50,000 by being the first female who completes 100 miles or male who completes 110 miles during the 24-hour race.

Toughest Mudder – With $120,000 up for grabs in 2017, more than $22,000 will go to the top five male and female finishers, including bonus prize of $5,000 for the first person to reach 50 miles at each event. An additional $10,000 will be bestowed to the top male and female finishers with the most miles at the end of the Toughest Mudder events season,

Participants will be ranked, and the qualifying ranking, a minimum of 25 miles completed at Toughest Mudder, enables individuals to qualify for the “Contender Category” at World’s Toughest Mudder and be eligible for additional prizes.

Tougher Mudder – $1,700 in prize money will be awarded at each event for top male and female finishers, totaling more than $75,000 for the year.