The good news – the venue they use in Atlanta (Bouckaert Farm) has a TON of parking. The bad news – it's a really long walk from the main parking to the festival area. So plan to add 1+ miles to your race distance for the walk back to your car after the race. Their $30-$40 VIP parking does get you very close to the start/end area though. 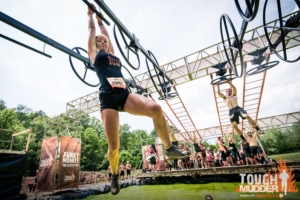 Lines, lines, and more lines. The line to just pick up your race number and get in the door at some points was more than 30 minutes to an hour. This was a drastic negative change from last year. I do not know what the root cause was, however, this was not the best way for attendees to get their races started.

Headband & T-Shirt, with a free beer once you finish

Large beer tents (with a free Sweetwater for you this year when you finished), and 3-4 food trucks for you to buy food from.  Also several vendors and mini-obstacles for families & spectators to try out

Unknown as TM doesn't publish results. Based on the back-up at obstacles, it seemed very well attended though….. 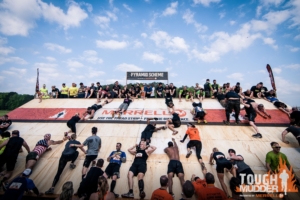 The course itself was in large parts the same as the course for 2016 but run in reverse. It is a mix of trail running in the woods (with some rolling hills, but no mountains), and running through farmland and open fields. Given the distance (12+ miles) and a number of obstacles (20+), at time it can seem like you are running for quite a while in unbroken stretches before you come to your next obstacle.  For Atlanta, the Half course was literally the first half of the course.  Around 6 miles in, the course looped through the festival area, and after Everest 2.0, the people doing the half just ducked into the finish shoot, while those doing the full Tough Mudder went back to the fields to do the back half of the course.

As for the obstacles itself, Tough Mudder remains unique in that for a large majority of people, their obstacles *require* teamwork. This is especially apparently in obstacles like Pyramid Scheme, which require you to stack 3 people on top of each other to pull people up and over the top.  Block Ness Monster, an obstacle with rotating cubes in water, requires teamwork as well as you need to push and pull the blocks as other people hang on to get flipped over them.

Their obstacles are also just fun. King of the Swingers (an obstacle requiring you to jump to grab a bar, which you then swing out and have to time your release right to hit a bell) is a fun “big production” obstacle most other races don't have the budget to pull off. Their “Funky Monkey” obstacle is ninja-warrior-esque this year, with you having to do an inclined-monkey-bar before having to work your way across 3 rotating wheels to get to the end. Kong is an elevated ring-swing for you to attempt once your arms are tired from all the other obstacles.  Everest is a version of a Warped Wall, which although it is less tall, is more slip and differently angled, with a larger lip at the top, requiring you to get assistance from people at the top. 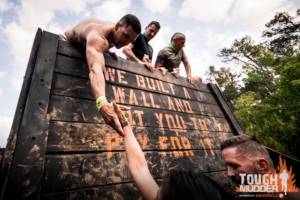 Now, while these obstacles were fun, for some reason this year a lot of obstacles saw a huge back-up at some of these obstacles – at some point, the wait time was nearing 30 minutes. For some obstacles, like King of the Swingers, at the time one or more lanes as out-of-commission (due to the bell being knocked off), so the backup made more sense. However, for others like Funky Monkey, every single lane was running, yet there was still a long backup. Even though Tough Mudder isn't “timed” (unless you are in the new first Tougher Mudder wave), this is still not how you want to spend your race, just waiting in 30-minute lines. At least 4 obstacles, at the time the author ran, had much longer than expected waits: Everest, Block Ness Monster, King of the Swingers, and Funky Monkey.

Tough Mudder puts on a well-run race, and I enjoyed their new or updated obstacles we saw this year. The parking situation isn't great, but it is what it is. The packet pickup process was crazy, and obstacle backup was annoying, but I feel these can be fixed before they come around next year. And, there remains no reason for them to electro-shock therapy as an obstacle, so maybe they'll have gotten rid of that by next year. So they have room for improvement, but it's still a race worth attending if you can afford the high-priced ticket (or have the time to volunteer in exchange for discounted entry)