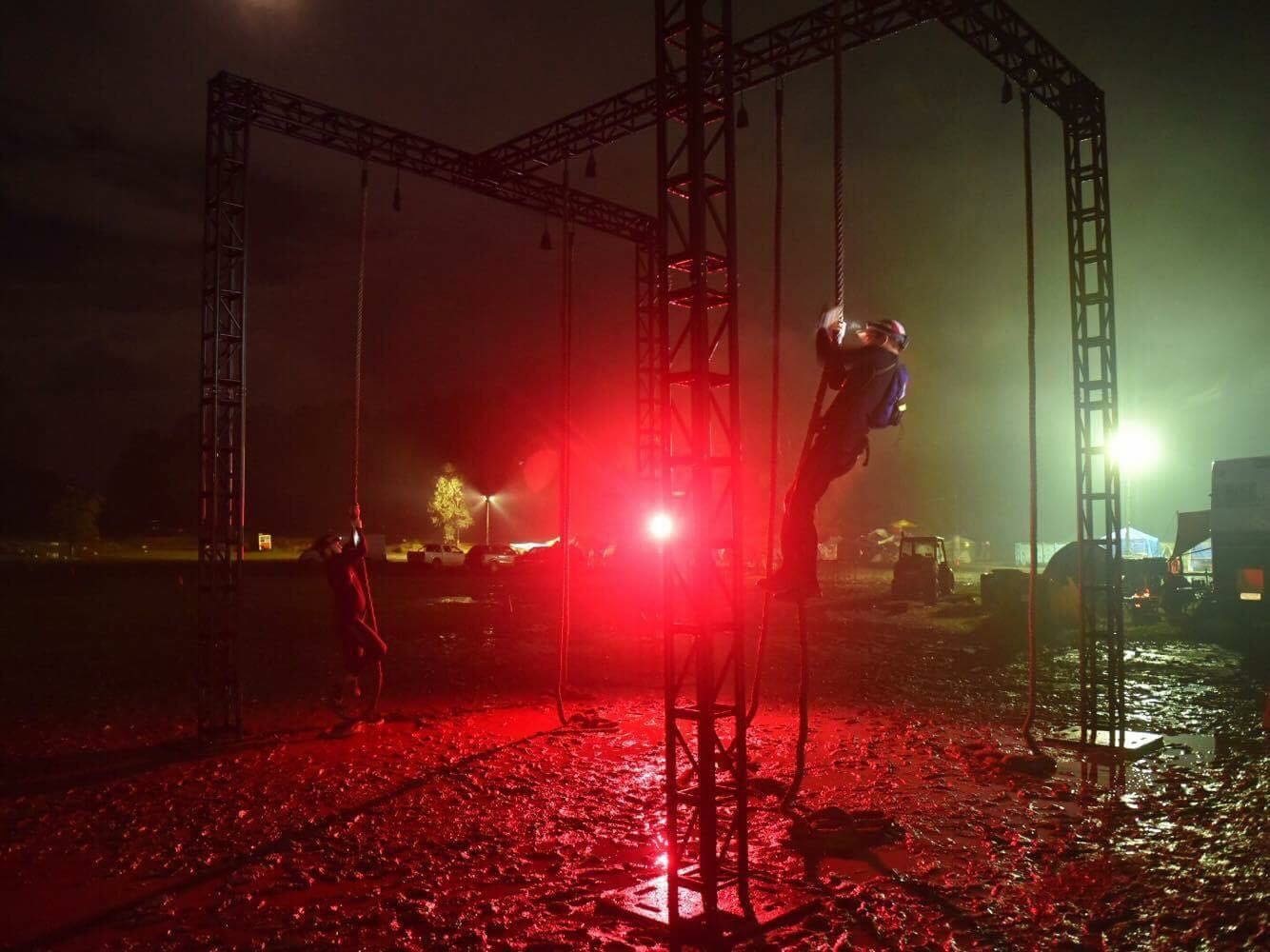 Wetsuits strongly encouraged for night ops if you are racing the solo category.

I had the pleasure of making my way across the Pacific Ocean to the only active 24-hour Ultra-OCR event in the Southern Hemisphere, True Grit Enduro 24. The trip was part of my quest for a high ranking Ultra-OCR Grand Slam (see link for details if you would like to know more). I imagine if this race interests you, you probably have done World’s Toughest Mudder (WTM), so I will be making a lot of comparisons in this review. Furthermore, as a reminder for those not up to date on how the axis of the Earth in relation to the Sun affects the seasons, June in Australia is Winter…not Summer.

The event ran from 2:30 pm Saturday, June 10th through 2:30 pm Sunday, June 11th and had a hard cut off time (you need to finish your last lap by the 24-hour mark). Check in opened at 8:30 am Saturday morning and continued through 12:30 pm. Check in was smooth and ran without issue, although I thought it was weird they gave out timing chips at the athlete briefing one hour before the event start instead of at check-in. In the end, it didn’t seem to make a difference since the hand out went smoothly and everything started on time. 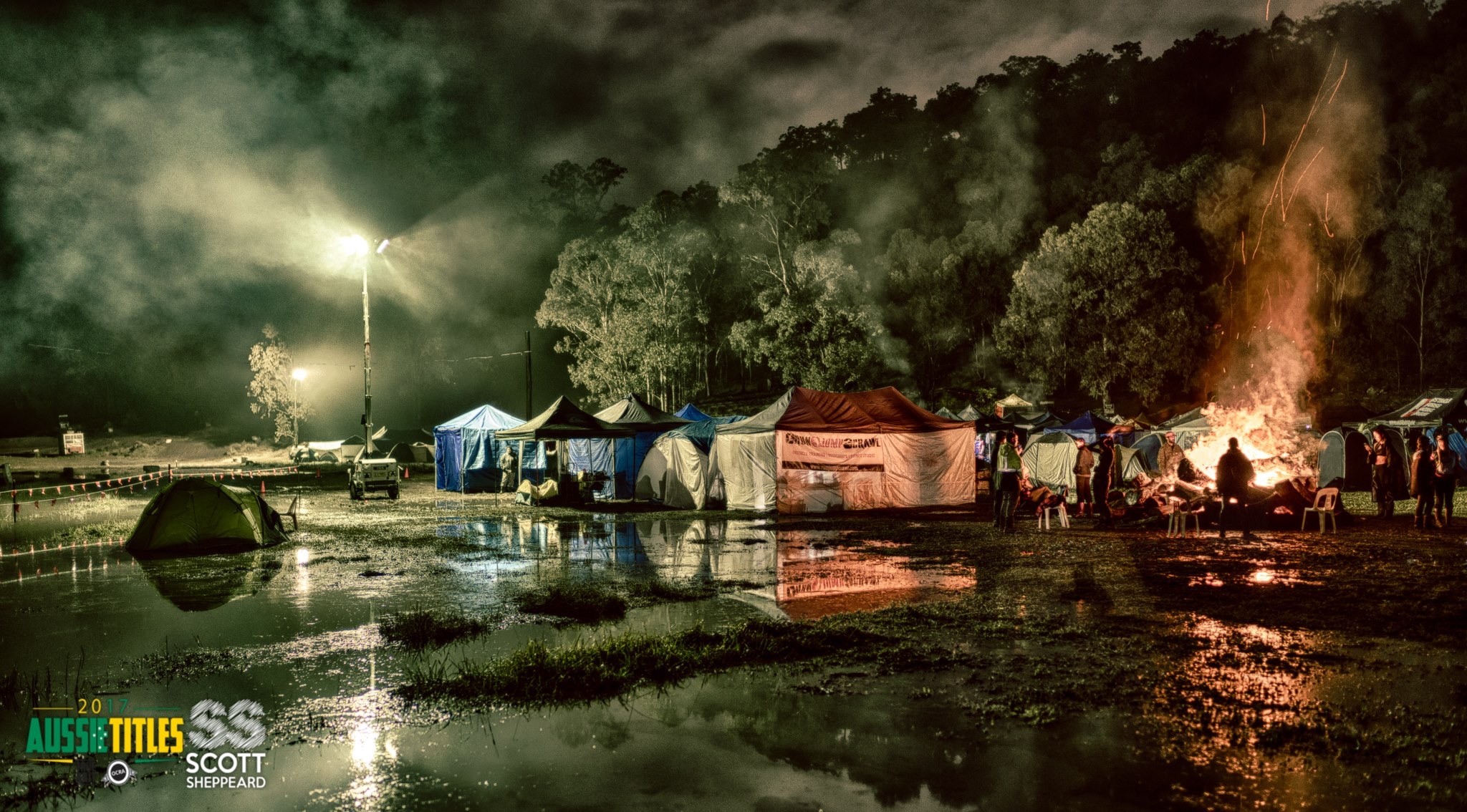 That's not a stream or a lake, that's the course and pit area flooded with water from a week of rain.

I loved the pit setup better than the current format at WTM. For those that ran WTM in Vegas in 2014, it was very similar. Instead of a single pit entrance (WTM 2015 and WTM 2016), each lap concluded with windy S-turns through the pit. This meant almost everyone had first or 2nd-row pit access, a setup I think is fairer for the entire field of athletes.

The course ran down the center of a valley and occasionally you would go up the sides of the valley wall to complete obstacles or to add elevation gain for each lap. The map below has the base of the valley in light green.   With each lap at just under 7 miles, it meant you had to be a little more nutrition conscious. There was one aid station on the course that had water cups and slices of oranges. Only one aid station normally would have been rough but the cool weather meant the need for lots of water was lower, so for me personally it felt like enough. 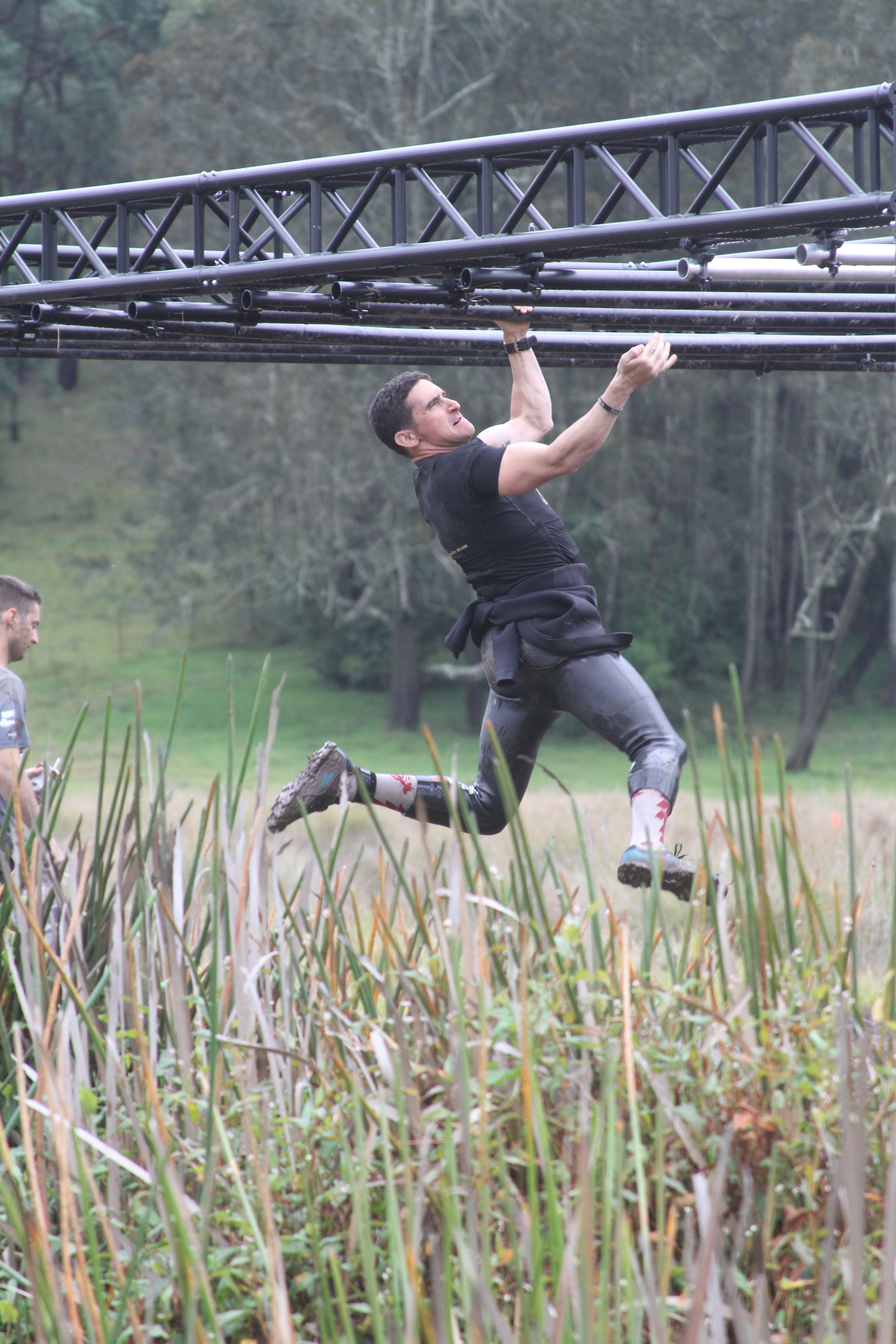 If you are used to WTM obstacles that require huge builds, that is not what True Grit Enduro provides. True Grit is a Military Themed Obstacle Course, so they derive much of their obstacles from that world. Included in the 30 obstacles per lap were things like walls, inverted walls, tire drag, double ammo can carry up a hill (which brought back some BattleFrog flashbacks), sandbag carry up a hill, thick monkey bars, Tyrolean traverse, low crawl, half water filled culvert crawl, a 50m swim and a series of cargo nets. Their urban sky obstacle looks a lot like Savage Race’s Wheel World, consisting of five rotating horizontal wheels. Unlike the US versions of this obstacle, the wheels don’t rotate as freely, so on my first lap, I crossed it but very inefficiently. Failed obstacles required a 10 burpee penalty and there were obstacle attendants at every obstacle for all 24 hours enforcing the rules (<- awesome!).

Easily the most memorable obstacle was Mud Mile…which was an actual mile of knee to waist deep water. The Mud Mile slowed movement drastically, wasted energy and sucked the heat from the lower half of your body. Urban Sky was “conveniently” located in the middle of this obstacle ensuring wet holds and tired racers.

The hardest obstacles, in my opinion, were the monkey bars and the 10-foot wall immediately following it. The monkey bars were rather thick PVC like pipes that became wet with morning dew making them extremely difficult to grasp. The 10-foot wall had no kicker board, was rather narrow and had short metal supports. The metal supports, once covered in mud provided very little traction making it hard to climb the wall without a helping hand.

When I arrived in Sydney it was raining…it rained for the next 8 days, which included the race weekend. The course was very wet with lots of mud and the pit area has standing pools of water. Definitely an experience I won’t forget. Temperatures were in the high 60s during the day and dropped down to mid-50s at night. 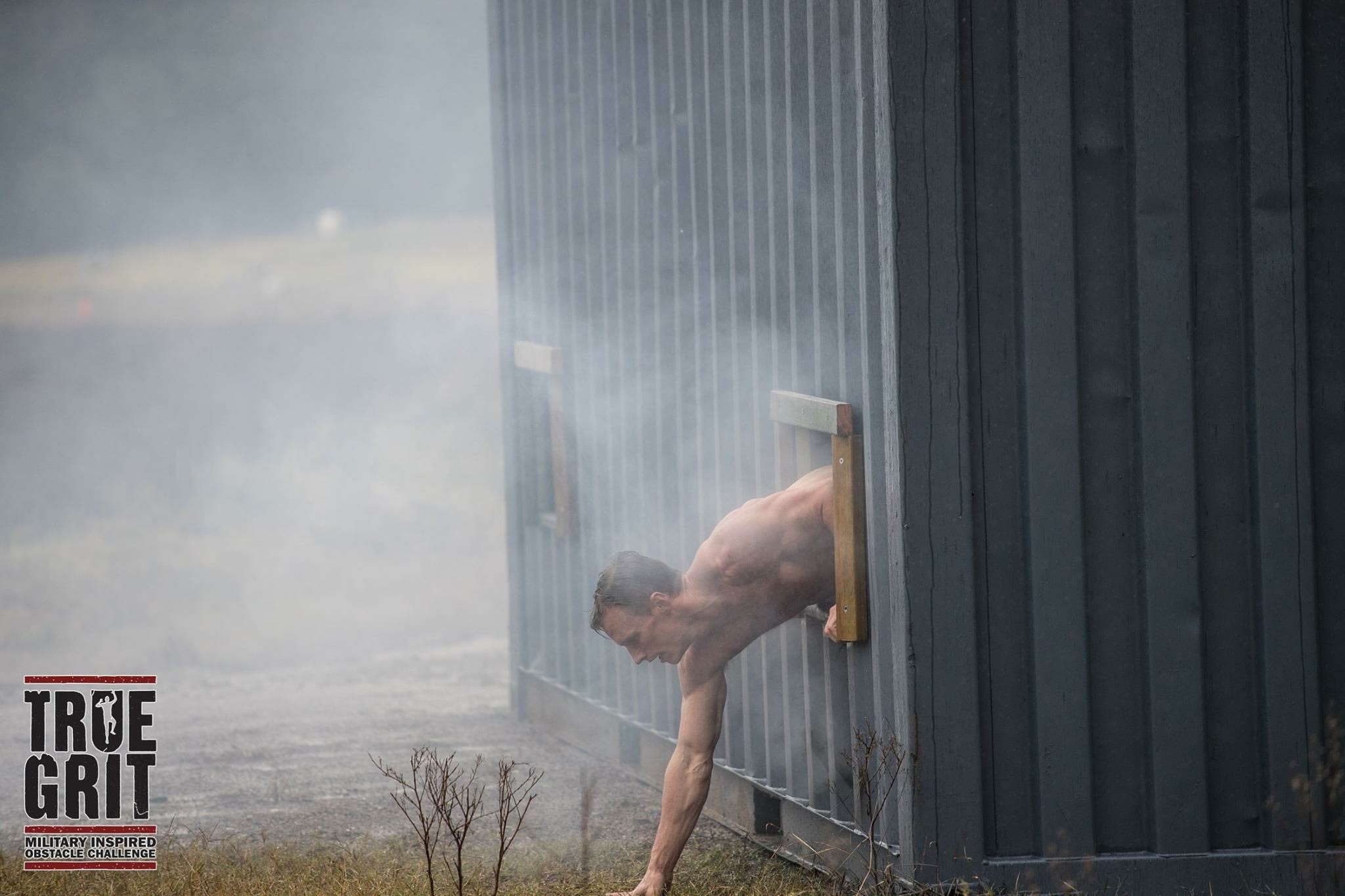 One of their more unique obstacles, a container with a smoke machine and a rope “spider web” inside with small ingress/egress openings.

As a competitor, one of the things I really liked was when you crossed the line on each lap, it told you what place you were in and how long your lap took. This appeared on a TV screen just off course so you knew exactly how you were doing. The pit area (that I previously mentioned) was also awesome. 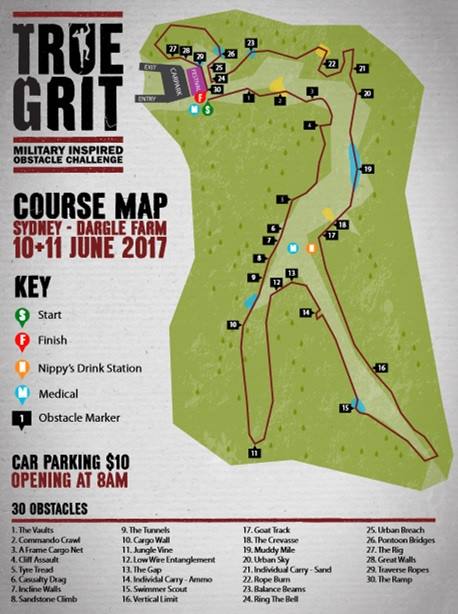 Aspects That Could Be Improved:

I loved the event but realized that one of the things I really like about WTM is the bibs (actually, the names on the bibs). It is cool to be able to recognize and see names of friends, competitors and random people you know from the internet. Plus, everyone looks the same in wetsuits, making it hard to identify anyone. The mileage awards (bibs, patches or something similar) at WTM is also something cool that I would like to see other Ultra-OCRs like True Grit adopt. This helps provide goals for athletes at all levels pushing people to stay on the course to get that one more lap.

If you plan on making the trip:

I highly recommend arriving in the same time zone or near the same time zone more than three days in advance. I arrived Wednesday morning before the event and despite several long nights of sleep, I was sleepy during the actual event, something that has never happened to me in all my 24 hr races.  Talking to other athletes from Australia that travel for WTM, they recommended a full 7 days to adjust to the time zone difference. 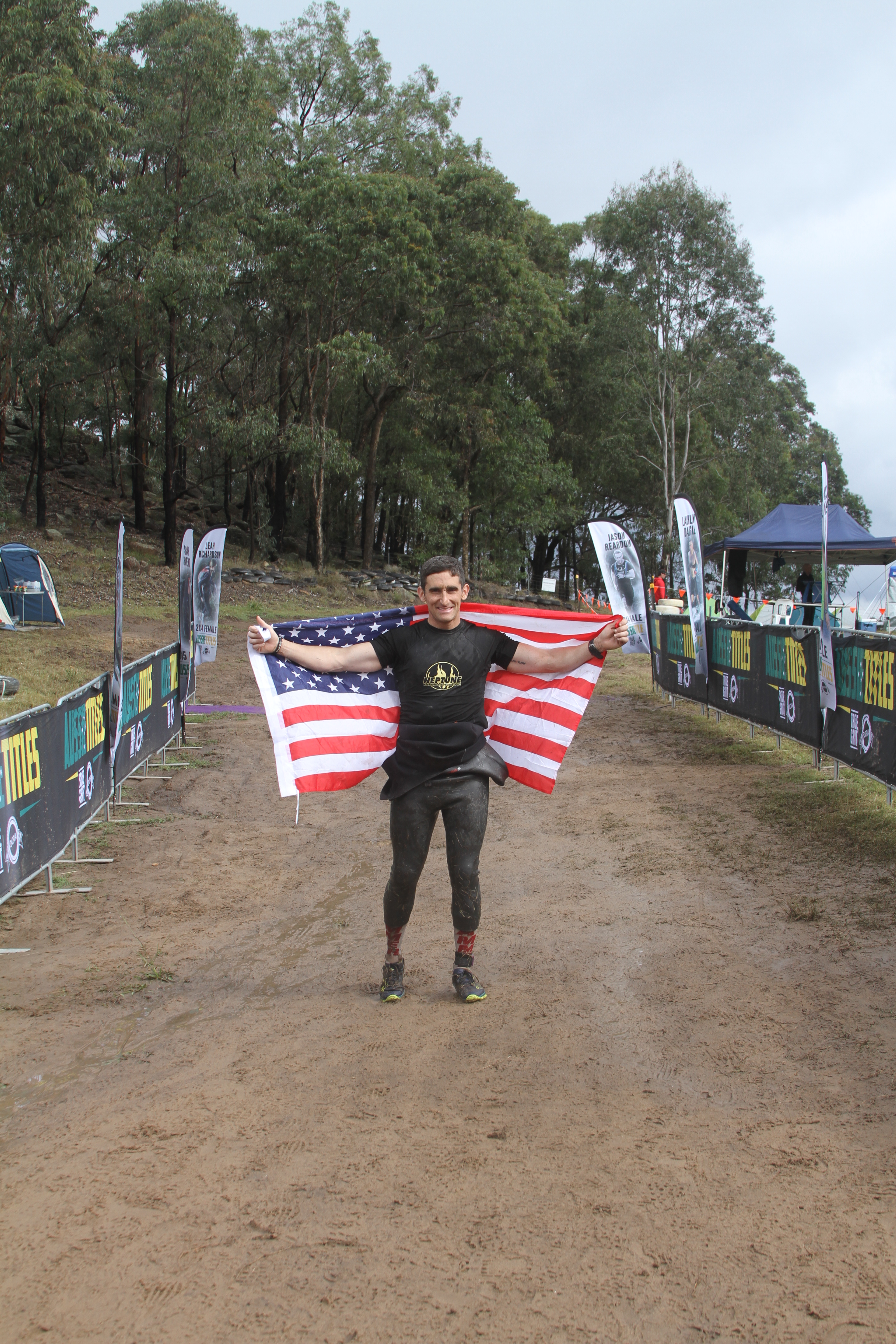 Representing for the USA down under.

It was a great event and it was such a cool experience to see the OCR World Down Under. The athletes at the event were just as friendly and just as helpful in the US. For the first couple of laps, I ran with various athletes making friends along the way. The event definitely has more of an “ultra-feel” than WTM. At WTM you pretty much can always see someone in front or behind you, at True Grit, there were definitely times I was by myself for long stretches of time. Overall, it was a cool experience and something I used to turn into a big family vacation before and after the race.

They also have a team relay options for 2-, 4- and 6-person, which I would actually recommend over the individual option. Having to haul all my individual equipment was challenging and the stress of trying to race at a high level in the middle of vacation was also a bit much. The four woman SISU #LikeAGirl US Team appeared to be a little less stressed than I was (and finished in 2nd against all male teams).

If you want more info on True Grit Enduro 24, follow the Strength & Speed podcast where I interviewed Australian Athlete Tim Oliver and where I will be releasing an episode talking about my personal experience more in depth.

Have you done an True Grit?

Leave your own True Grit review and feedback...