Since my last Spartan Race in this series at Citifield last year, much has changed.  They made registration a lot easier by almost getting the whole thing down to one question and one screen.  “What’s your name?  Sign here.”  From their perspective, this was a positive indication of more good things to come yesterday at the Citizen's Bank Park Stadium Sprint.  For me, I had to blow it at least twice more. 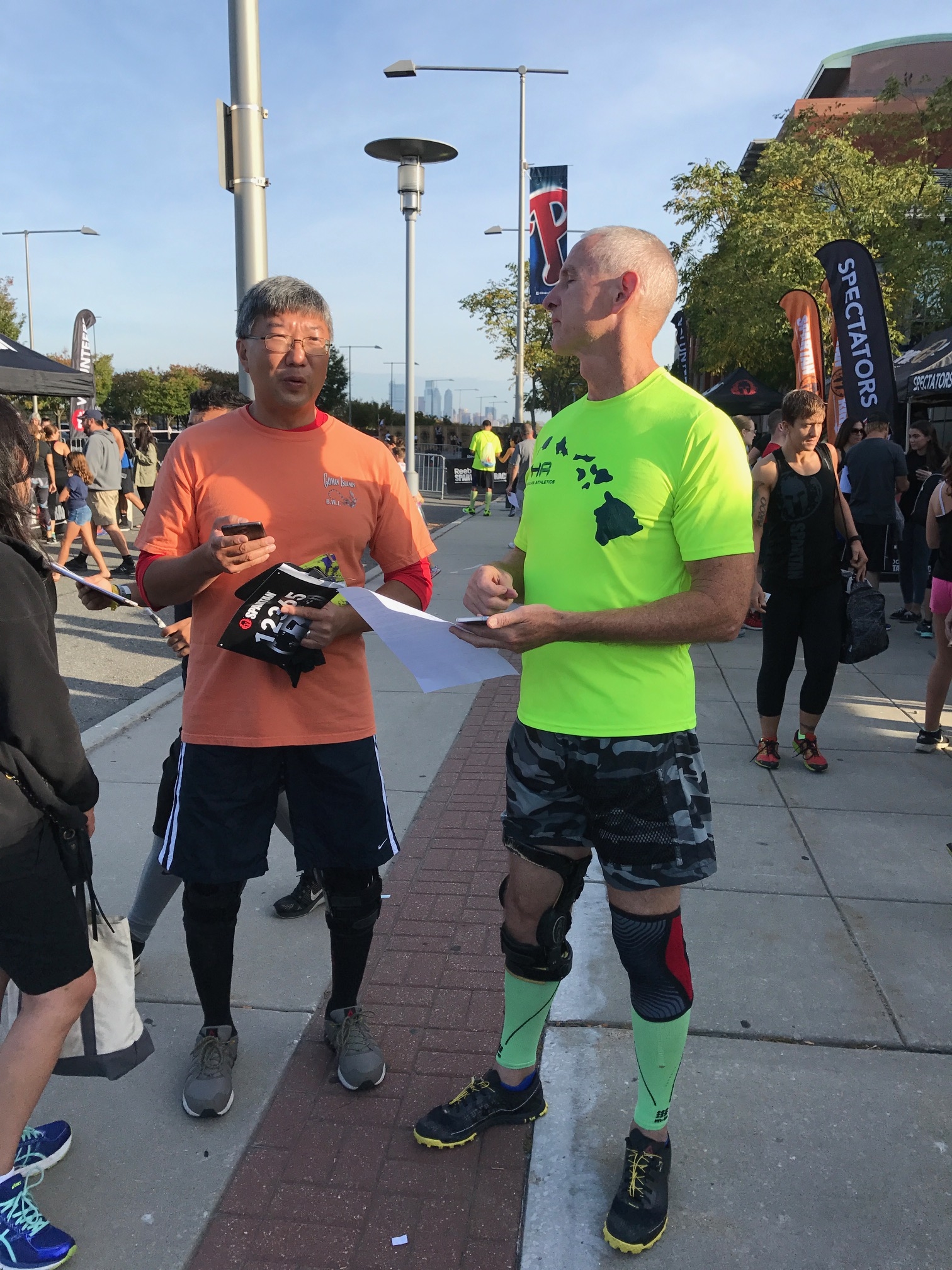 Registration is now fast and all electronic

This is what happens when the seasoned OCRMudmaster is out of the game for a year recovering from ACL surgery.  Even though I stayed tight with the game through social media, attending a few races for media coverage, and watching countless episodes on TV, I missed the hands-on knowledge and experience of being a racer.  Or it could just be that I’m getting old and can’t remember much anymore.

I ran with Team ACE, comprised of friends from work and family, met up at Registration and then went through security, under the Spartan A-Frame, and into Citizen’s Bank Park.  We scoped the place out.  I met some old friends, looked for others.  Then I went to check my bag and found out this was no longer a complimentary service.  It cost me five bucks.  I thought I was at the bank for a second.  What’s up with this fee Spartan?  When I go to the city and handsome kid a Lincoln, I expect them to watch my car and maybe clean the windshield.  You know what I mean?  But five bucks to throw my bag on a table? 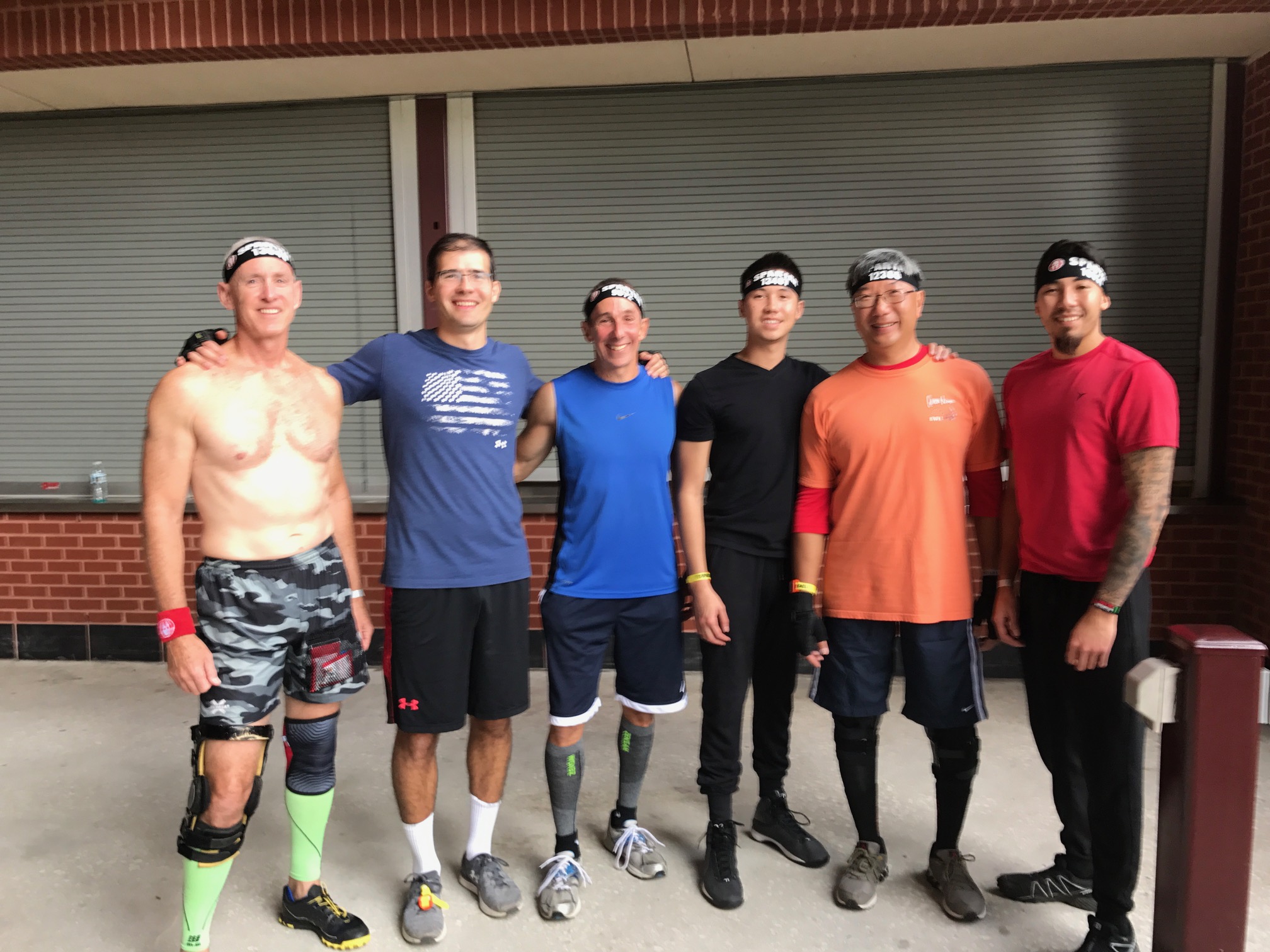 We arrived after the elite race was over so I hoped to meet a few and introduce myself and my friends.  Robert Killian was there.  He was so gracious.  We talked a while, took photos.  He never corrected me for thinking he was Brakken Kraker, for telling him what a great job he and David Magida did announcing at Tahoe last weekend.   I did not realize my mistake until after I got home last night. 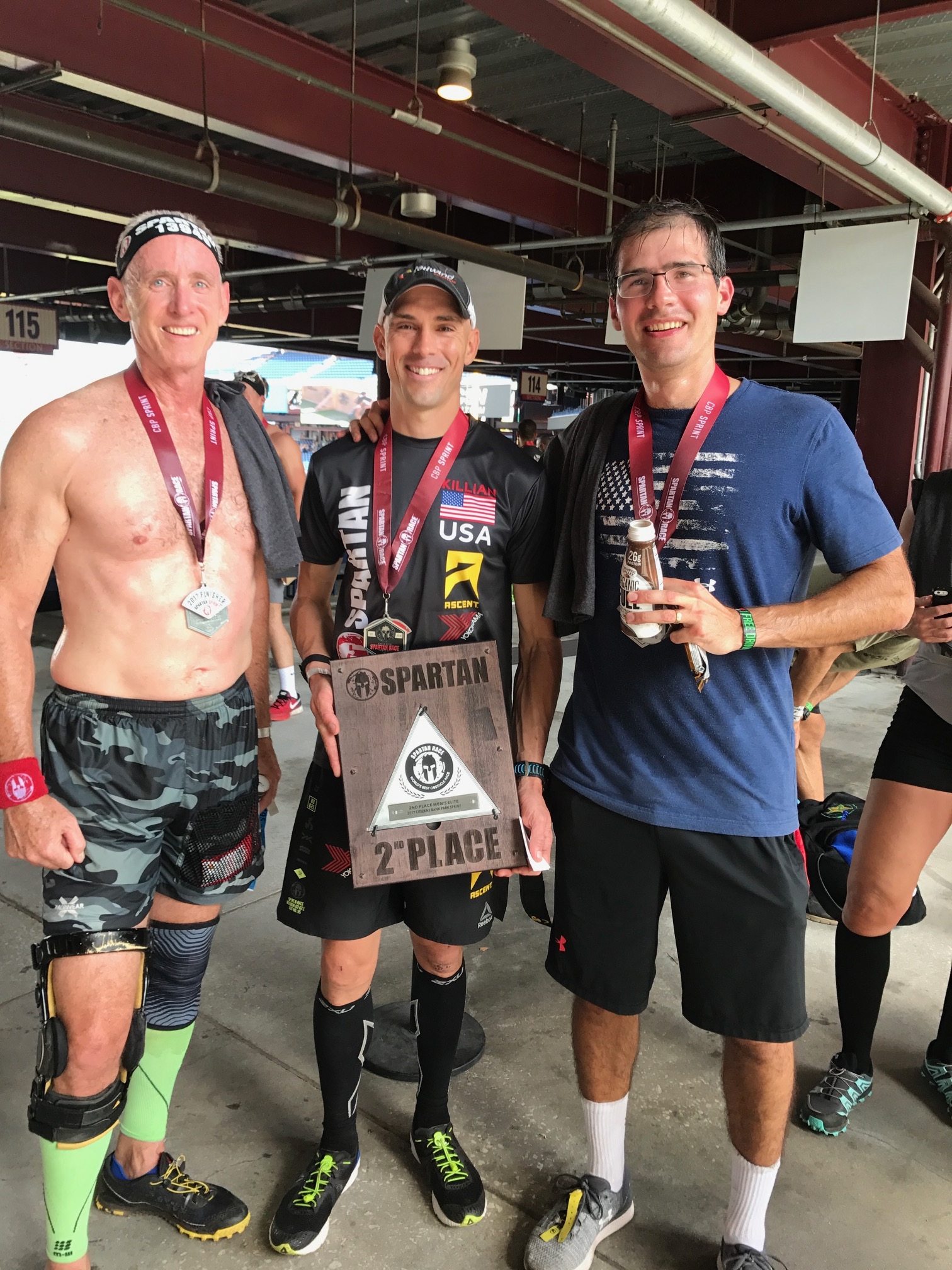 Steve and I with Spartan Pro Robert Killian

In my stead, my good friend John Antonucci took all of today’s photos.  He was supposed to race but got sidelined with kidney stones.  They were not caused by OCR training.  John got a kick out of meeting Robert Killian.  John’s a real fan of OCR and has been training with me for over a year.  He finally did his first race just a month or so ago at the Bonefrog Englishtown.

Once we got on the course, just about everything turned back to normal and went down as expected.  We hopped the corral wall and joined the queue.  Waves took off pretty much on time.  I took the front left hot spot, expecting to leave it all on the course.  To my right was team ACE with my friends, Steve and Ed.  Steve brought his two college-aged sons and his other friend Glenn.  We talked a lot of trash and had a great time getting pumped for the race.  It was a first ever for everyone but me and Ed. We took off and headed into the clubhouse where we did twenty hands-free pushups.  We wove through the bowels of the stadium and emerged at the A-frame.  I started to execute a fast roll descent but had to put on the brakes so I would not smash into people below me.  Then it was on to the rig after we ran inside the normally off-limits stadium service corridors. 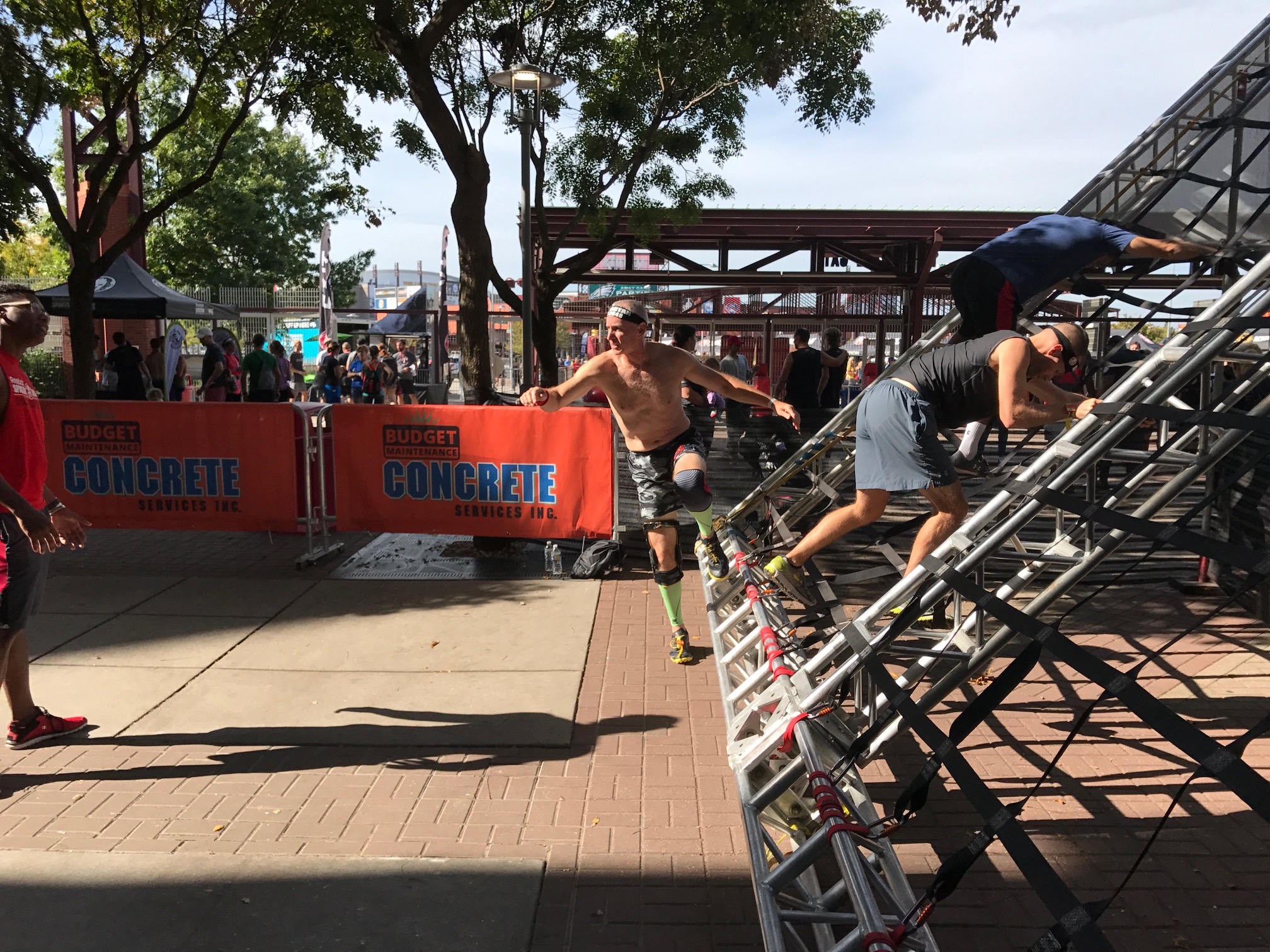 The rig had most lanes lined with rings and then two balls at the end.  However, we noted before the race that the last two lanes had all rings.  I took the next to last lane and waited for them to almost clear before I took off.  I was still too fast and right at the end as my momentum swung me forward, my legs collided with the guy in the next lane who was stuck.  That brought me to a complete stop.  But I hung on, did a pull up, and grabbed the ring behind me to start swinging again.  I finished the rig without dropping. 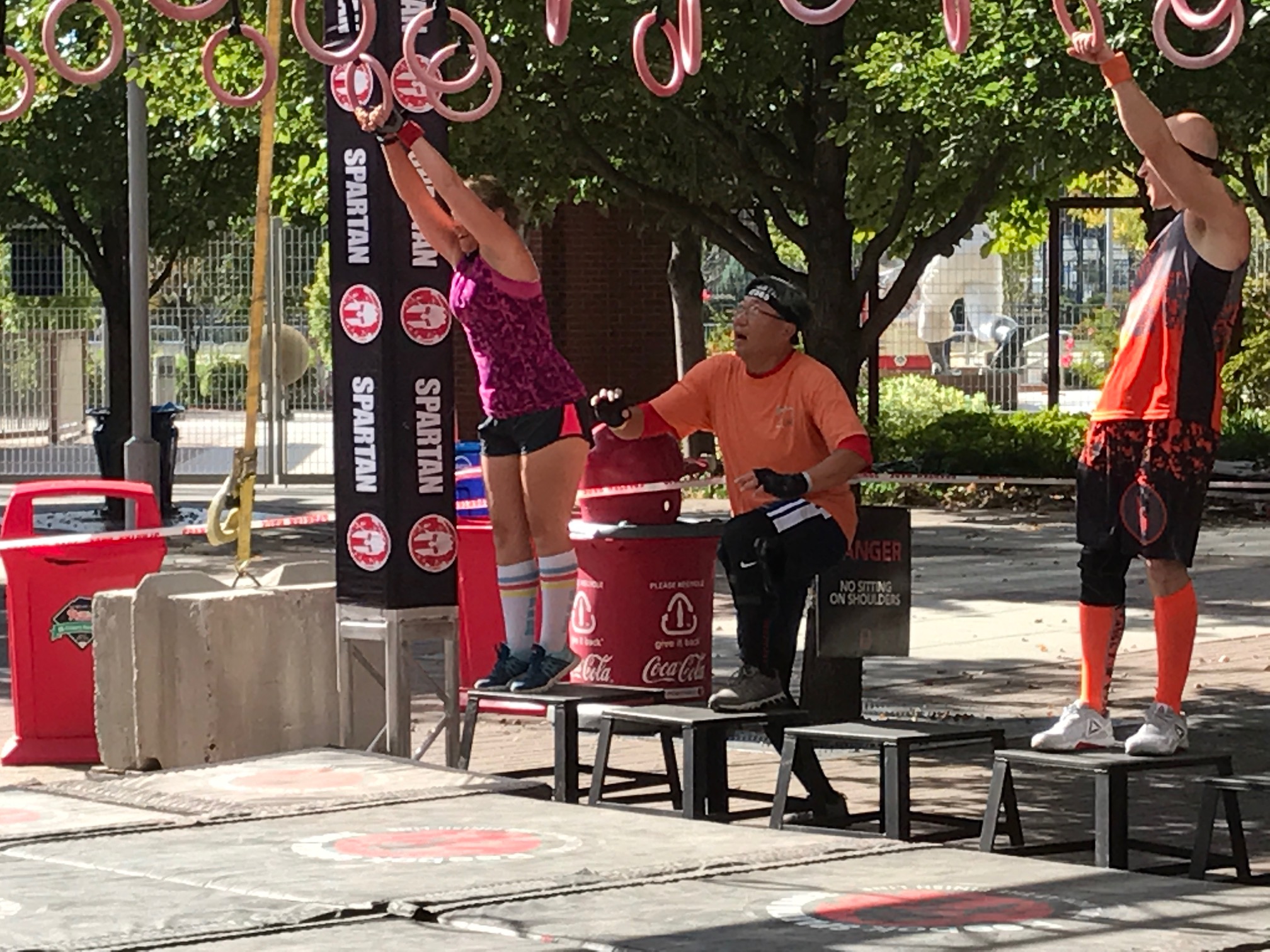 Ed contemplates the best lane to cross the rig

Back into the stadium, it was about twenty minutes or so of obstacles that they don’t show you on the map.  Lots of ascent and descent through the low bungee cords.  Hundreds of stairs.  Mixed in was the Herc Hoist and maybe a few other things that I can’t remember now that I am 55 years old.  The heavy jump rope was in there somewhere.  The obligatory sandbag carry was much shorter than before.  The jerry can carry was also very short and men only had to carry one.  Last time I did this series, we carried two.  I liked two better.  Trained all summer with two.  Very disappointed. 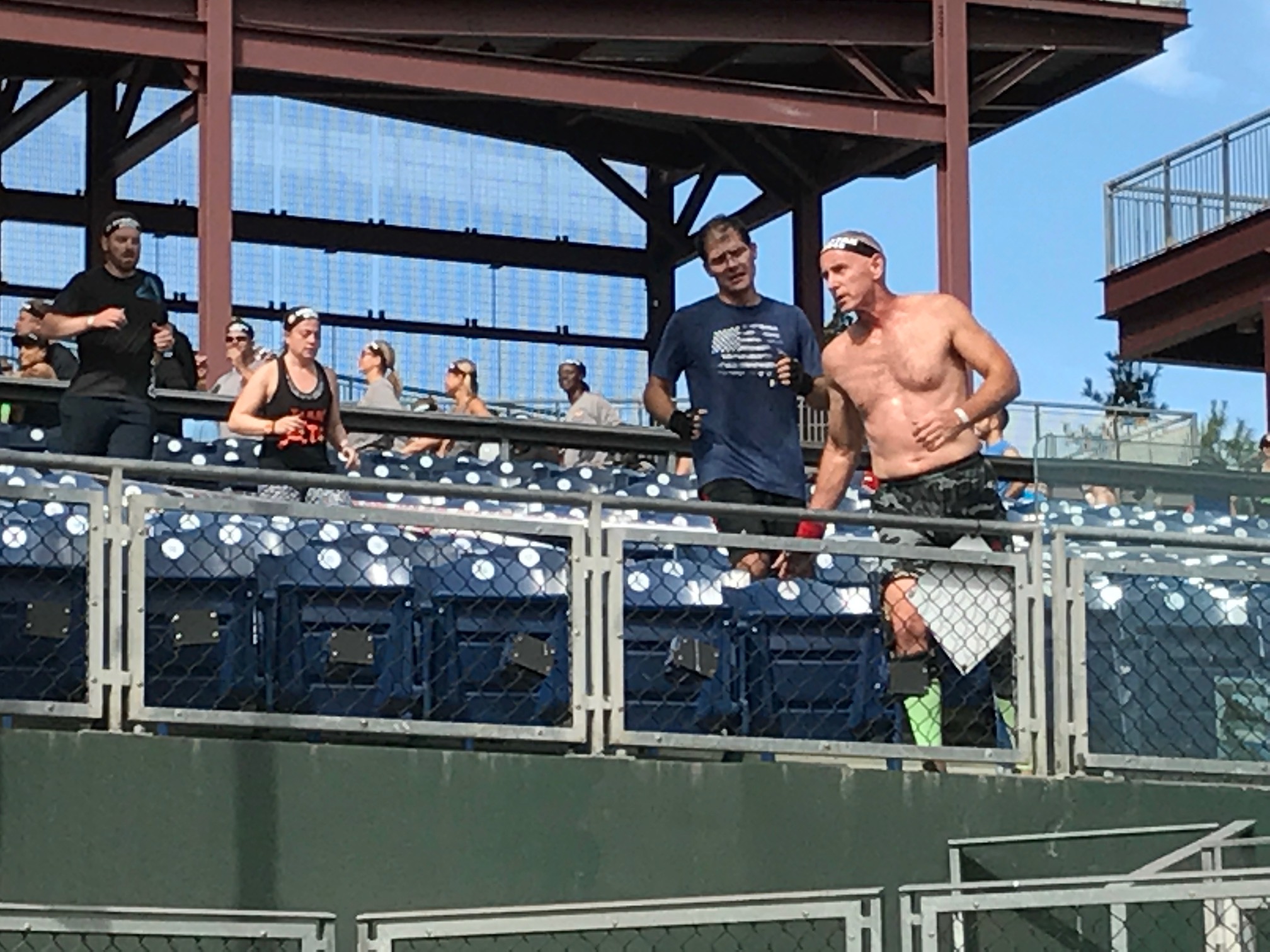 Steve and I rounding the last corner in the stands 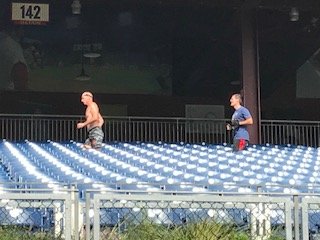 We ran down the ramps, grabbed a quick swig of water at the bottom, and headed out to the parking lot obstacles.  There was a military wall, the plank-walk with a dolly under your feet, and then the dreaded spear throw.  My throw was strong, solid, and straight, just to the right.  Thirty slow burpees later I was over to the Z-wall.  Then the stone carry, five burpees, carry stone back.  Next was twenty box jumps.  From there we were in the home stretch as we went back into the stadium for more stair grinding. 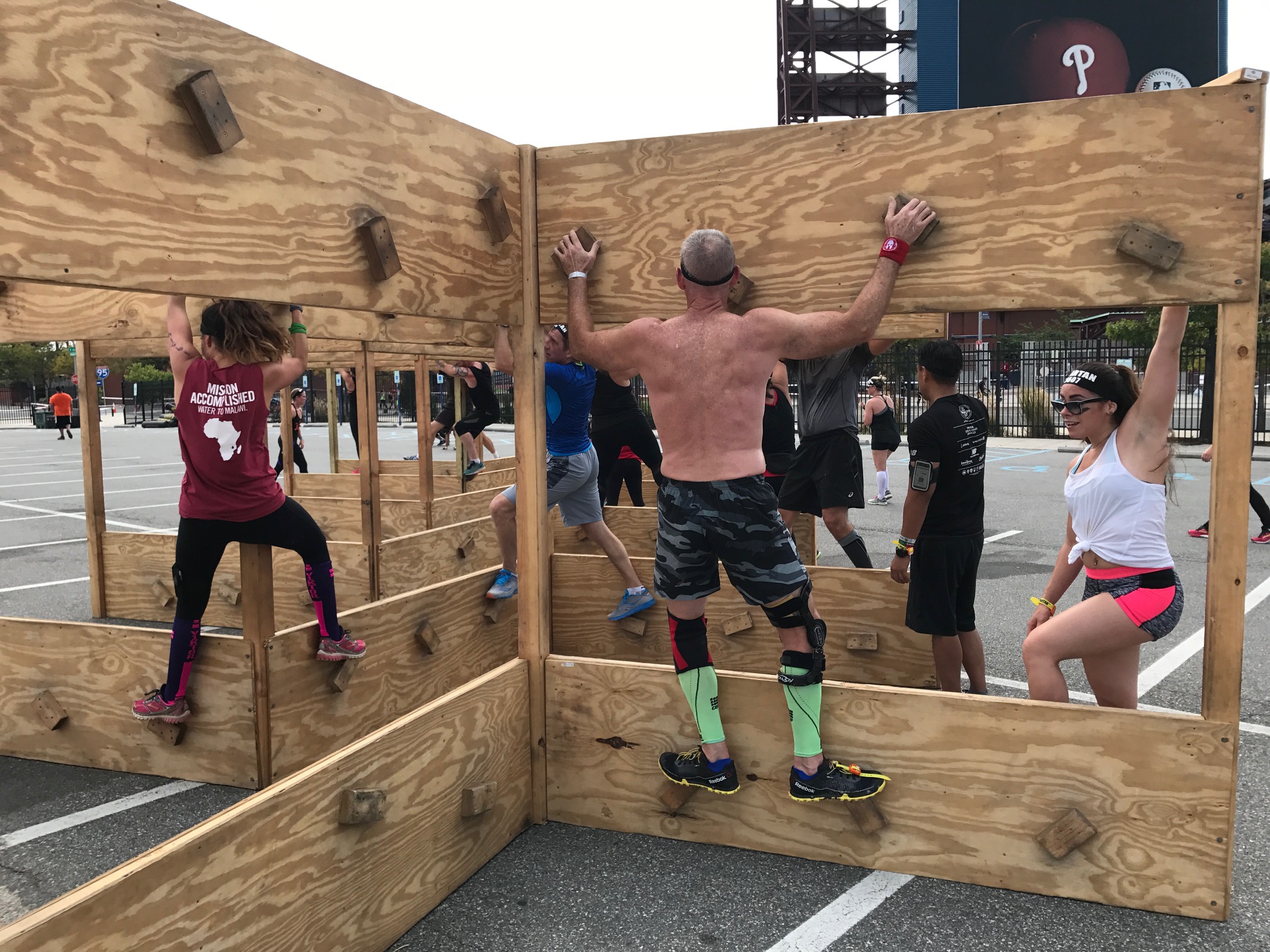 John said I had a great save on the Z wall 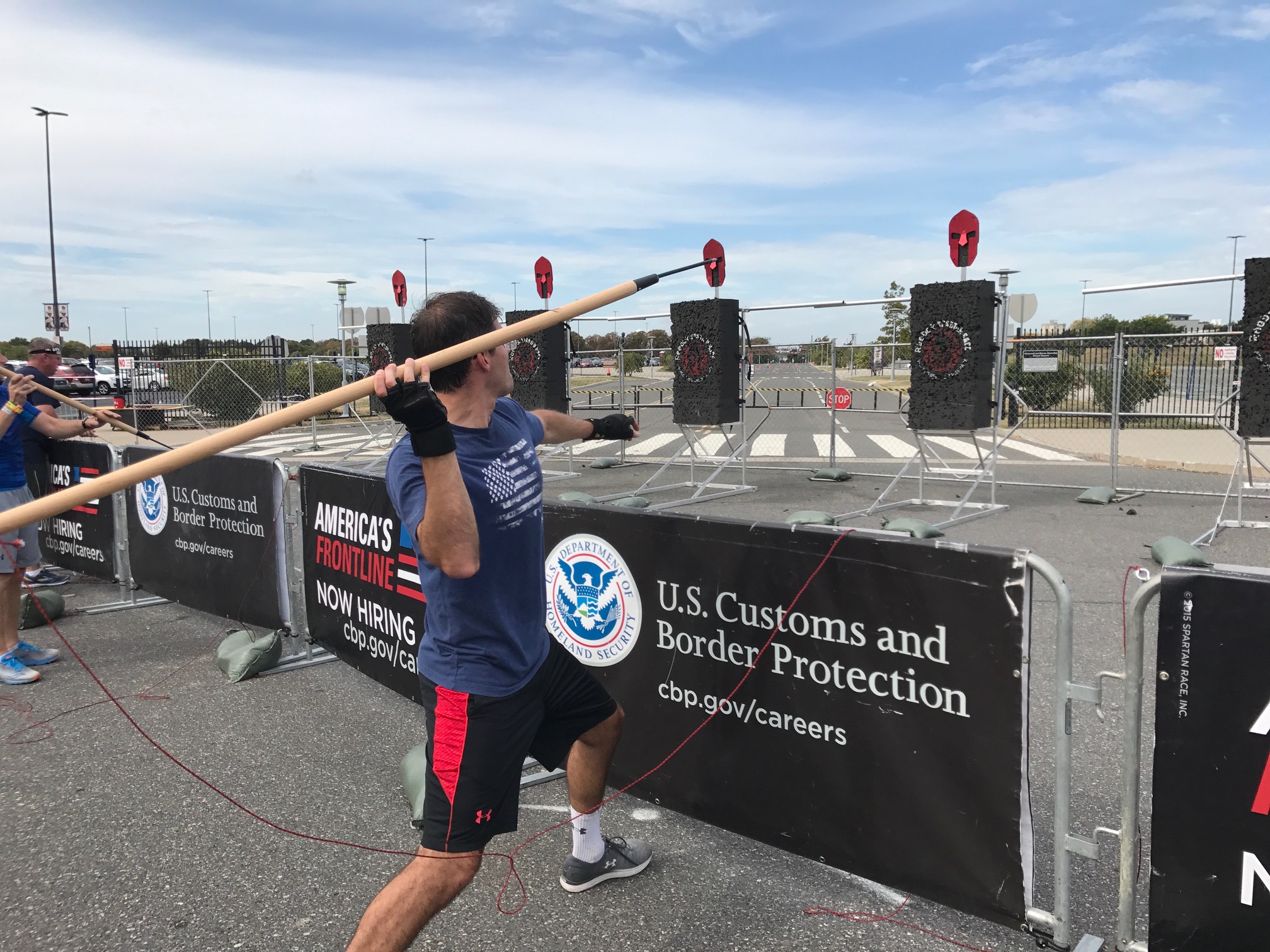 Steve threw wide to the right. His only fail om the course. 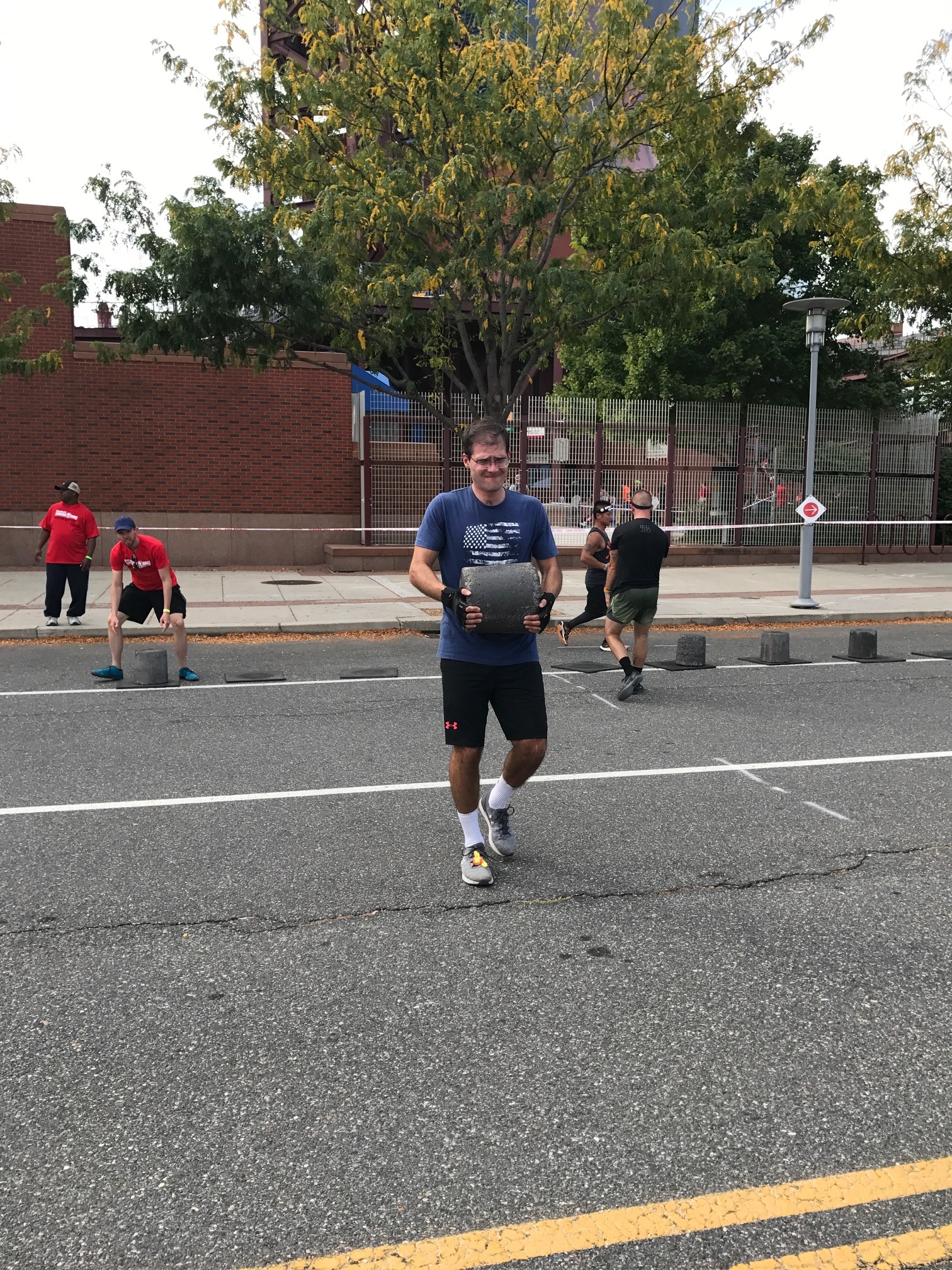 Finally, we got down to the field level.  The coolest thing here was the surprise use of the grass.  This rarely happens.  But today was special.  CBP will soon replace their grass so Spartan got to put obstacles right down center field.  But to get there, racers first had to do twenty balls slams and climb the rope.  Since this was a very heavy grind intensive course, very light on the upper body, I had plenty left to do a double rope climb, no feet.  Then it was down to a triple wall hurdle and finally the Gauntlet. My favorite move and plenty of gas left at the end for a no feet, double rope climb

A very nice volunteer put my medal around my neck.  Then we took a few team pictures of the four of us who finished fairly close together.  I led the pack with Steve right next to me.  He shadowed me the whole race.  At eighteen years my junior, he is also a natural athlete.  He could go so much faster.  I’d love to train him.  He’s never done anything like this in his life.  He didn’t fail any obstacles but the spear throw.  His technique was quite good throughout.  Both of us beat the college kids on our team by over three minutes. 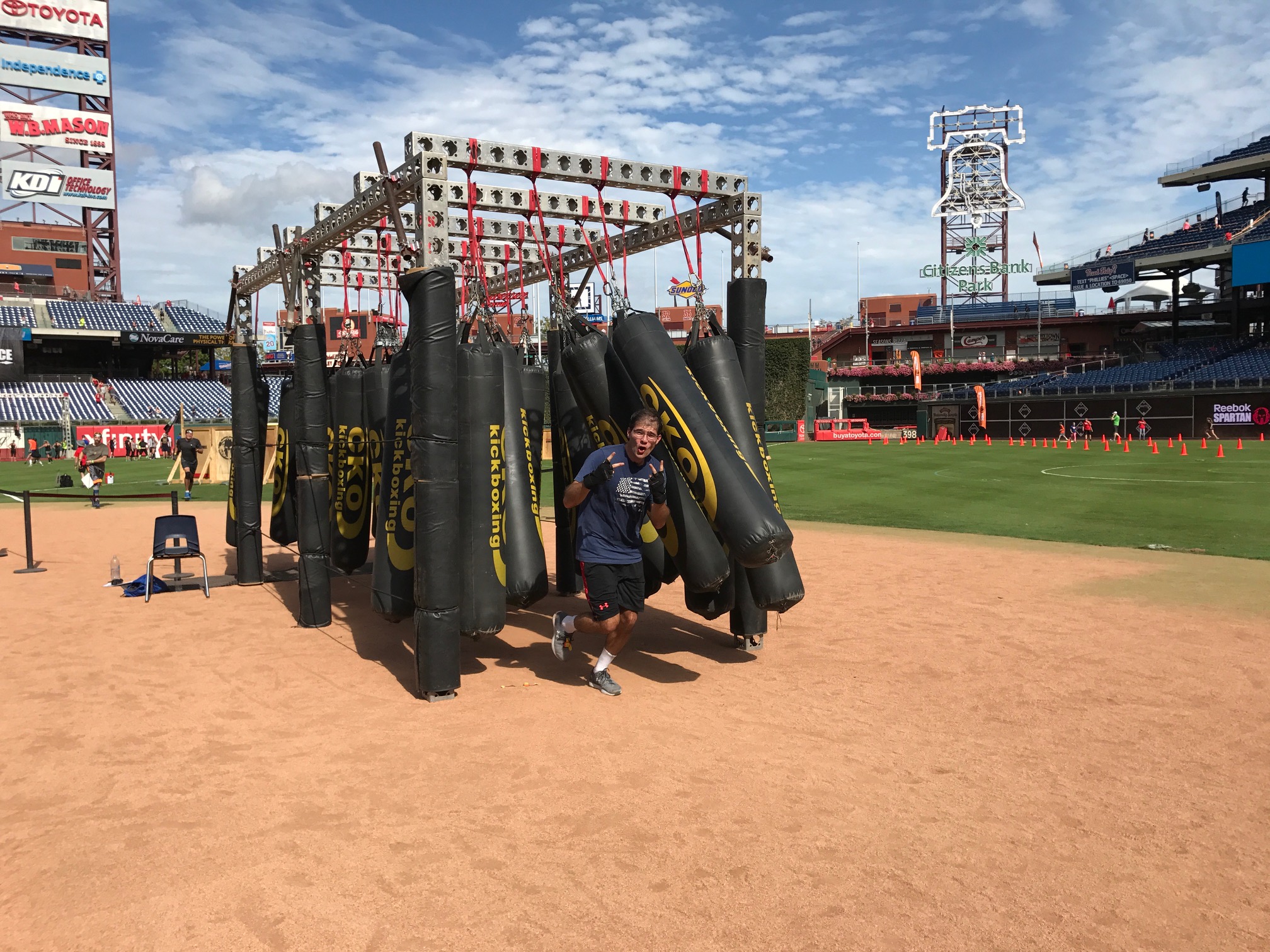 Steve had enough gas to ham it up at the gauntlet The final sprint to the finish line

Overall, Spartan did a great job.  Very well organized.  The course was clearly marked.  At the end, they had bananas, Clif Bars, and protein drinks.  We never did find the beer table.  But there was a table giving out free Kombucha.  I wasn’t about to try that for the first time in my life right after a race.  The merchandise table was there of course.  I did gawk at one table demonstrating and selling the weirdest looking foam rollers I had ever seen.  They were a Spartan brand.  I wonder if anyone has tried them.  They looked more like candy molds for saltwater taffy. 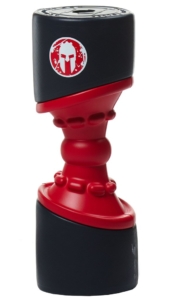 Spartan is marketing a lot of their own equipment nowadays

After the race, we ran into Robert Killian again.  Took a few more pictures.  I still thought he was Brakken.